Grant Thompson
This article contains:
Lyon native is No. 382 in Pepperstone ATP Rankings

Giovanni Mpetshi Perricard is a tennis junkie. Not only is the 19-year-old finding early success on the ATP Challenger Tour, he also manages to watch his close friends, such as Arthur Fils, on Challenger TV.

Amidst all his matches, practices, work outs, travelling, and the minute details that go into a professional tennis player’s life, the Frenchman is a true supporter of his friends.

This week at the Helsinki Challenger, he didn’t have to go online to watch Fils. He was across the net for a first-round qualifying match.

“I try to watch every single match of Arthur’s on Challenger TV,” Mpetshi Perricard told ATPTour.com.

In 2021, ‘Gio’ made his first breakthrough as he partnered with Fils to win the Roland Garros boys’ doubles title. That same week, Fils got the better of him in the boys’ singles semi-final en route to a runner-up finish (l. Van Assche). In Finland, the roles were reversed as Mpetshi Perricard qualified for the Helsinki Challenger main draw. The #NextGenATP Frenchmen are hoping to be among the next generation of top professionals in their country.

“It was nice to win the boys’ doubles title at home with my friend,” Mpetshi Perricard said. “Now when I see the results of Arthur and guys like Gabriel Debru, we push each other in a good way. When we are back training at the [French Tennis] Federation, there is a good atmosphere together.”

The Lyon native, who has competed in just eight Challenger events in his career, is already learning valuable lessons through the highs and lows of the professional circuit. One important learning curve came after a tough loss in May.

“At the Bordeaux Challenger, I lost in qualifying to Salvatore Caruso after having two match points,” Mpetshi Perricard said. “After the match I told myself, ‘Giovanni, you had two match points against a very good player, so you can go higher!’

“The beginning of the season was very complicated for me. I had a shoulder injury and I was sick. Now I’m really happy to be playing at 100 percent.”

This summer, ‘Gio’ advanced through qualifying en route to reaching his first Challenger semi-final at the Liberec Challenger, where he lost to eventual champion Jiri Lehecka. The Frenchman continued to play well on the clay-courts, including the Lima-2 Challenger, where he was a quarter-finalist (l. Coria).

The youngster stands tall at 6’7” and carries an aggressive game style. Boasting a heavy delivery, solid forehand, and a one-handed backhand, ‘Gio’ pounces on any opportunity to close the net. 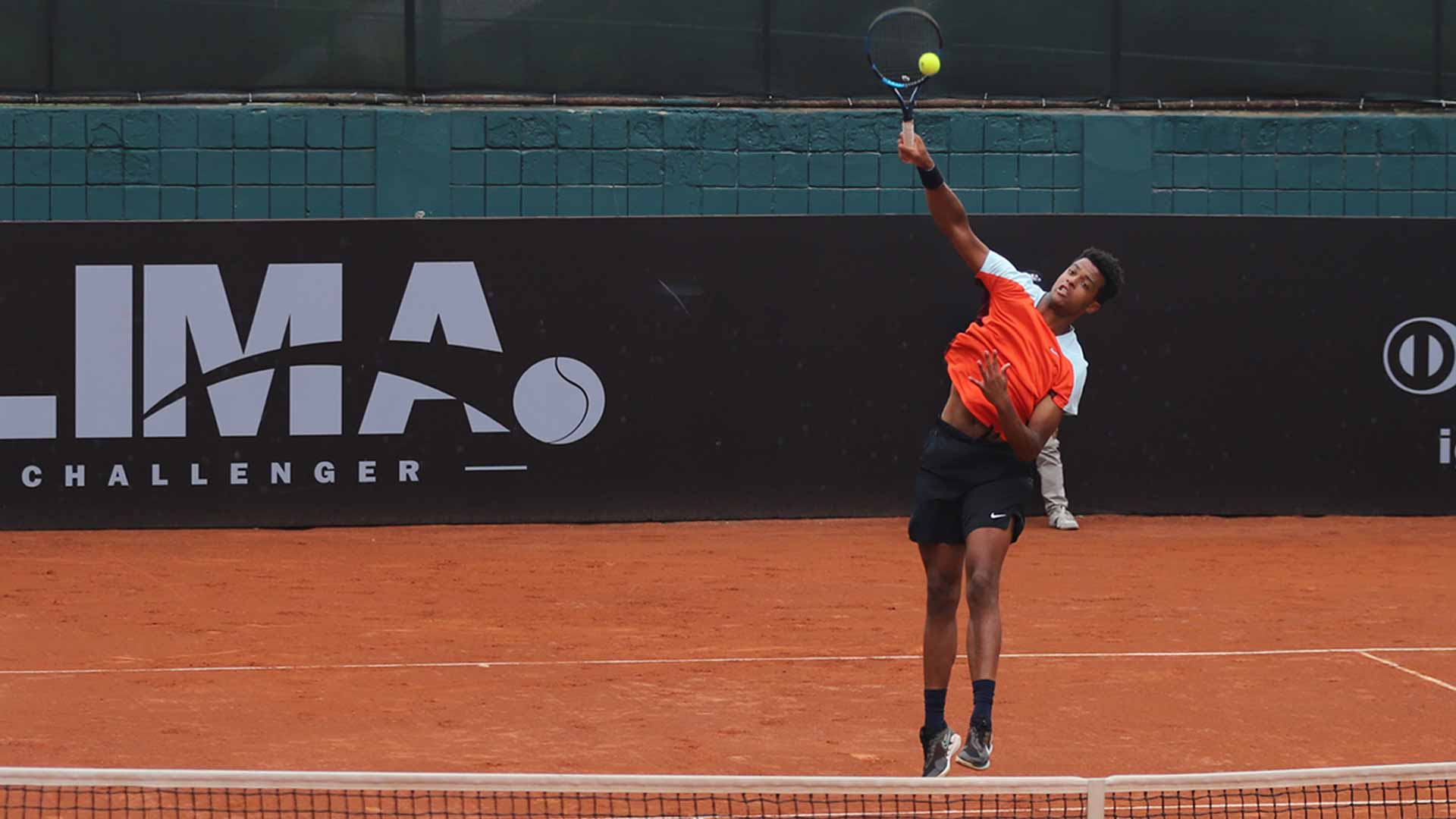 Coached by Emmanuel Planque, who has previously worked with former Top-25 players Michael Llodra, Lucas Pouille, and Fabrice Santoro, the World No. 382 has his eyes set on following in the footsteps of his French tennis idols Jo-Wilfried Tsonga and Gael Monfils to achieve a childhood dream.

“Growing up you see Roland Garros on TV, and I told myself, ‘I want to be there!’” Mpetshi Perricard said.

The Frenchman isn’t the only tennis player in his family with a bright future. His 13-year-old sister Daphnee won the J3 Saint Cyprien ITF event this past month. Giovanni cracked a laugh as he shared that he will never allow her to beat him.

Whether he’s watching his friends on Challenger TV, finding success of his own, or enjoying a sibling rivalry against his younger sister, ‘Gio’ has the sport of tennis flowing through his veins.