Challenger Chat: Inside Kozlov's Journey Back To Titletown

Stefan Kozlov wins his second title of the year in Charlottesville

For most players competing on the ATP Challenger Tour, the road to the top is not a straight line. There are many bumps and obstacles along the way. While the journey may become longer and more complex, it is that exact process that hardens even the toughest of competitors and shapes who they become both on and off the court.

Stefan Kozlov knows this firsthand. After many years fighting for belief and purpose on the court, the 23-year-old American is steadily carving his own path up the FedEx ATP Rankings once again. Kozlov, who achieved a career-high No. 115 in 2017, is back inside the Top 200 for the first time in three years after lifting the trophy at the Charlottesville Men's Pro Challenger.

Having fallen as low as No. 550 exactly two years ago, this moment takes on added significance for the Florida resident. He dropped just one set en route to securing his second Challenger title of the year, defeating Australia's Aleksandar Vukic 6-2, 6-3 on Sunday.

Kozlov, a former junior No. 3, had a world of expectations heaped on him from a young age. And when he became one of the youngest players to advance to a Challenger final, as a 16-year-old in Sacramento in 2014, it cemented that projection of becoming the next big star of American tennis.

But Kozlov experienced his share of bumps in the road, which forced him to dig deep and fight through the tough times, both between the lines and away from the court. Now, he says he's better for it. A more mature and complete player, both mentally and physically, he is riding a wave of momentum that has seen him win 14 of 15 matches at this level and rise to No. 188 in the world. 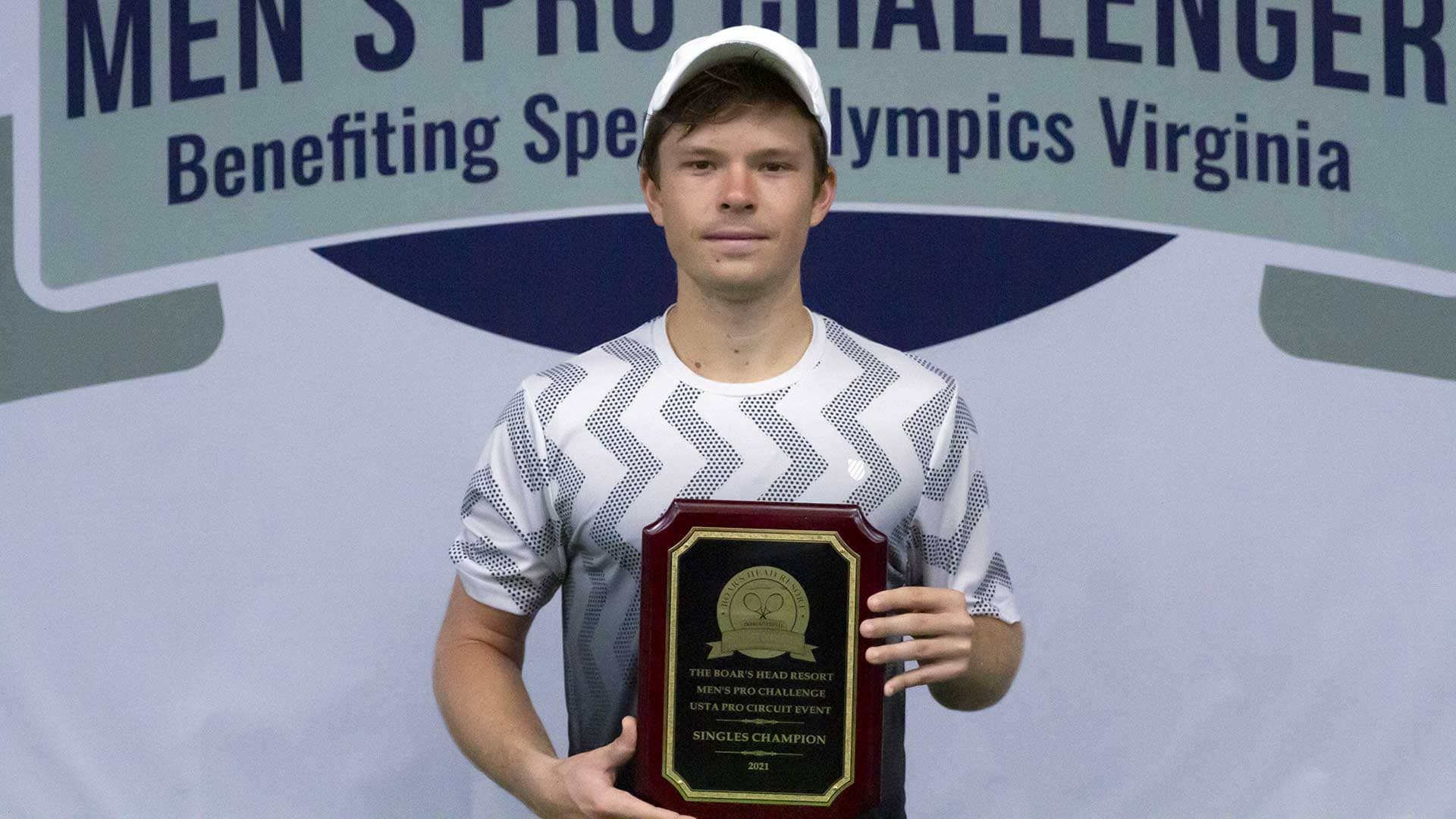 The American spoke about his journey with broadcaster Mike Cation following the Charlottesville final...

Congrats Koz. You've been through quite the long journey. This three-month stretch has been remarkable. How have you done it seemingly so quickly?
It's been a long, long process. Like I said a couple days ago in an interview, it's a lot of losses and hard times. I know there are many people out there with bigger problems than I have, but for me I went through many issues - life issues - and I just came out stronger. I take the lessons with every defeat and the last couple months I've put myself around some very knowledgable people, who have helped me to figure out my strengths and weaknesses.

What has it been specifically for you? Has it been some fitness or all mental?
Mental is a big part of it. Fitness is at a high level for me, but I have a long way to go with it. Just playing in the high heat moments in Florida or Australia. It's going to be the next step for sure. Mentally, it's just being more angry. I'm coming out here now and trying to rip your head off. I'm establishing myself and in the past I would let off the gas too early. These guys are all good and it's more or less a UFC fight in a way. That's helped me be at my best.

How do you sustain that?
From Alexander Zverev to Reilly Opelka, I grew up with those guys, but I completely fell off the mountain while they kept rising. I'm still very far off from them, but that's my goal, to compete with those guys again. That's what drives me. It would be a pretty cool story.

Koz is king in Charlottesville 👑@stefankozlov takes the title in C'ville, breezing to his second crown of 2021.

Now 14-1 on the ATP Challenger Tour since mid-September 💪 pic.twitter.com/TF07vFf4la

What was your gameplan coming into this final again Vukic?
It's very simple. What does Vukic want to come out and do today? He wants to rip inside-in and inside-out forehands and have long points. I have a general idea of how he wants to play. It's a combination of playing my game and making them uncomfortable. I'm not going to just play my game first point to last point. Everyone has these things you have to be aware of.

There aren't many players that have the skillset to do that. You have variety. A lot of it. When you approach a match, how do you say that this gameplan is going to work today and I'm going to use this strategy one day and a different one the next day?
For me, it's a big deal playing in these tournaments and playing in the later rounds. It's nerve-wracking. You start to forget about simple things. Like on Saturday, I didn't make adjustments in the second set. I kept hitting the ball too short. It's one thing talking about it and another being out there and trying to make those adjustments. I try to fall back to hitting big balls and sneaking in, because that gives me the best chance. But it's a huge difference being out there and having the awareness.

When people say that I have so much variety, I don't really know what that means. It's foreign to me, because it's just the way I was taught the game. That's who I am. I know I can hit big and then use my slice, but my weapons are a huge thing. Serve needs to get better, fitness needs to get better. Everything can improve.

You are now in the mix for the USTA's Australian Open wild card, along with J.J. Wolf and Maxime Cressy. Are you thinking about that at all?
Not really, to be honest. Sure, it would be such a cool experience to play in the main draw of a slam. I never have. But like I said, there's so much to go and I just focus on the next match. That's how I approach it.