10 Takeaways From The Inaugural ATP Cup

The inaugural ATP Cup has come and gone. 220,319 fans streamed through the gates in Brisbane, Perth and Sydney for the first edition of this 24-country event. ATPTour.com looks at the 10 takeaways from the first ATP Cup:

1. Team Serbia Clinches Inaugural ATP Cup
There were throngs of Serbian fans who turned out to support Team Serbia throughout the first edition of the ATP Cup, from Brisbane — where the country won Group A — to Sydney, home of the Final Eight. The Serbian players certainly did not let them down.

In thrilling fashion, Serbia defeated Spain 2-1 to claim the trophy, with World No. 2 Novak Djokovic beating World No. 1 Rafael Nadal in straight sets in the No. 1 singles match, before returning to Ken Rosewall Arena to partner Viktor Troicki past Pablo Carreno Busta/Feliciano Lopez for the trophy.

"I'll remember this experience for the rest of my life as definitely one of the nicest moments in my career,” Djokovic said. “I've been very fortunate and blessed to have an amazing career the past 15 years, but playing for the team, playing for the country with some of my best friends for a long long time, you can't match that. That's just too special." 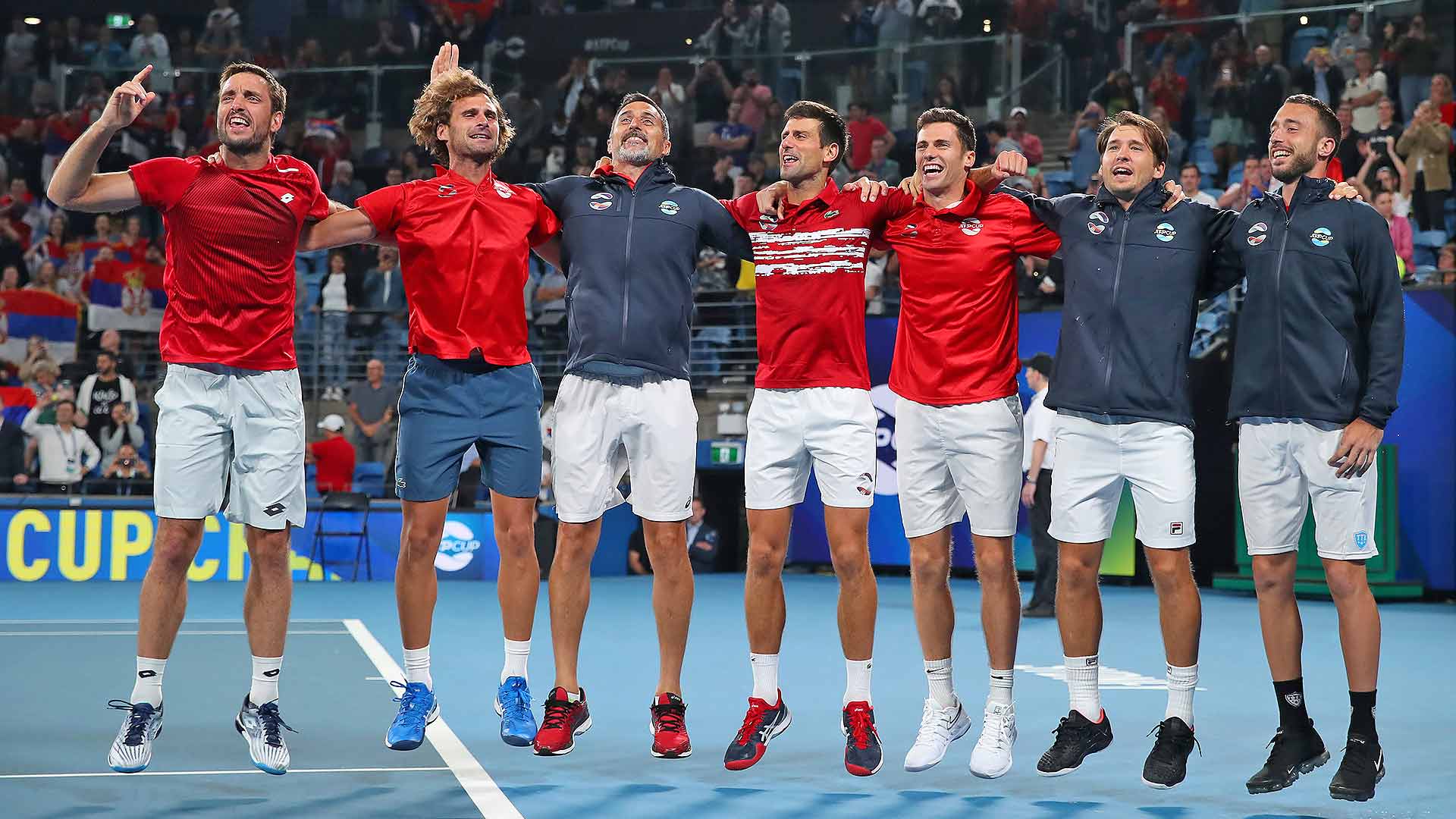 2. Spaniards Shine, Fall Just Short Of Title
Rafael Nadal and the rest of Team Spain battled hard from Perth to Sydney, working their way to the deciding doubles in the championship tie. But the Spaniards fell just short against an inspired Serbian side.

The Spaniards had their backs against the wall in the quarter-finals against Belgium, with Sander Gille/Joran Vliegen taking the first set of a deciding doubles match. But the entire team showed relentless determination, helping them advance to the championship. Roberto Bautista Agut, who went 6-0 at the first ATP Cup, gave his country a point against Serbia. But it was not enough.

"I think is a great competition. Excited to be part of it. Excited to represent my country," Nadal said. "I enjoyed a lot to share all this week and a half with my friends on the team. The organisation have been fantastic, honestly."

3. Australians Thrill Home Crowds En Route To Semis
The Australians needed a wild card at the first entry deadline to ensure their spot in the inaugural ATP Cup. But the home favourites proved that they were plenty deserving of their place, advancing to the semi-finals.

In the Final Eight, Australia played in one of the most memorable ties of the event, defeating Great Britain 2-1 when Alex de Minaur and Nick Kyrgios saved four match points in the deciding doubles to stun doubles stars Jamie Murray and Joe Salisbury.

De Minaur was close to surprising World No. 1 Rafael Nadal in the semi-finals, which would have forced another deciding doubles thriller. But despite the Aussie’s tremendous effort, backed by a raucous crowd, Spain ended the home side’s run.

4. Russians Show Why They Will Be A Force For Years To Come
Russia’s top two singles players, Daniil Medvedev and Karen Khachanov, are both 23. So making the semi-finals shows that their country will be a force to be reckoned with for years to come.

Khachanov and Medvedev led Russia through Group D play with the loss of just one match across three ties. And with a dangerous Argentina team waiting in the Final Eight, they raised their levels even higher to earn a 3-0 sweep and make the semi-finals. Medvedev played Djokovic in one of the matches of the tournament, but fell just short of sending his country to a deciding doubles.

Team Moldova challenged a foot fault that was called on Alexander Cozbinov during his doubles match alongside Radu Albot against Great Britain. The chair umpire performs the review using a screen and audio attached to their chair, so Albot climbed up the chair to check it out himself.

“I think it’s really cool,” Albot said of Video Review. “I also saw… with Novak when he put the racquet over the net. That was interesting because if there is no VR [Video Review], you cannot see, it is so quick.”

6. Team Zones A Hit
One of the players’ favourite innovations at this 24-country event was the Team Zone. Instead of sitting on a bench next to the umpire’s chair, players had a zone in the back corner of the court where they were able to confer with their country’s captain, personal coach, countrymen and support staff.

On many occasions, players scheduled to compete later in the day would first show their support for their countrymen. The same held true for those who had already competed, rushing back to the Team Zone as close to when their match ended as possible.

“In ATP tournaments normally you cannot even communicate with your coach, you’re by yourself and thinking by yourself,” said Russian No. 2 Karen Khachanov. “You’re trying to analyse what’s going on and here you have your whole team behind you, your personal coach, captain. The stats enable you to talk about every point and I think it’s a really good addition.”

Anyone in the Team Zone was able to use a special tablet to analyse live stats and other information, helping them to potentially change tactics mid-match. 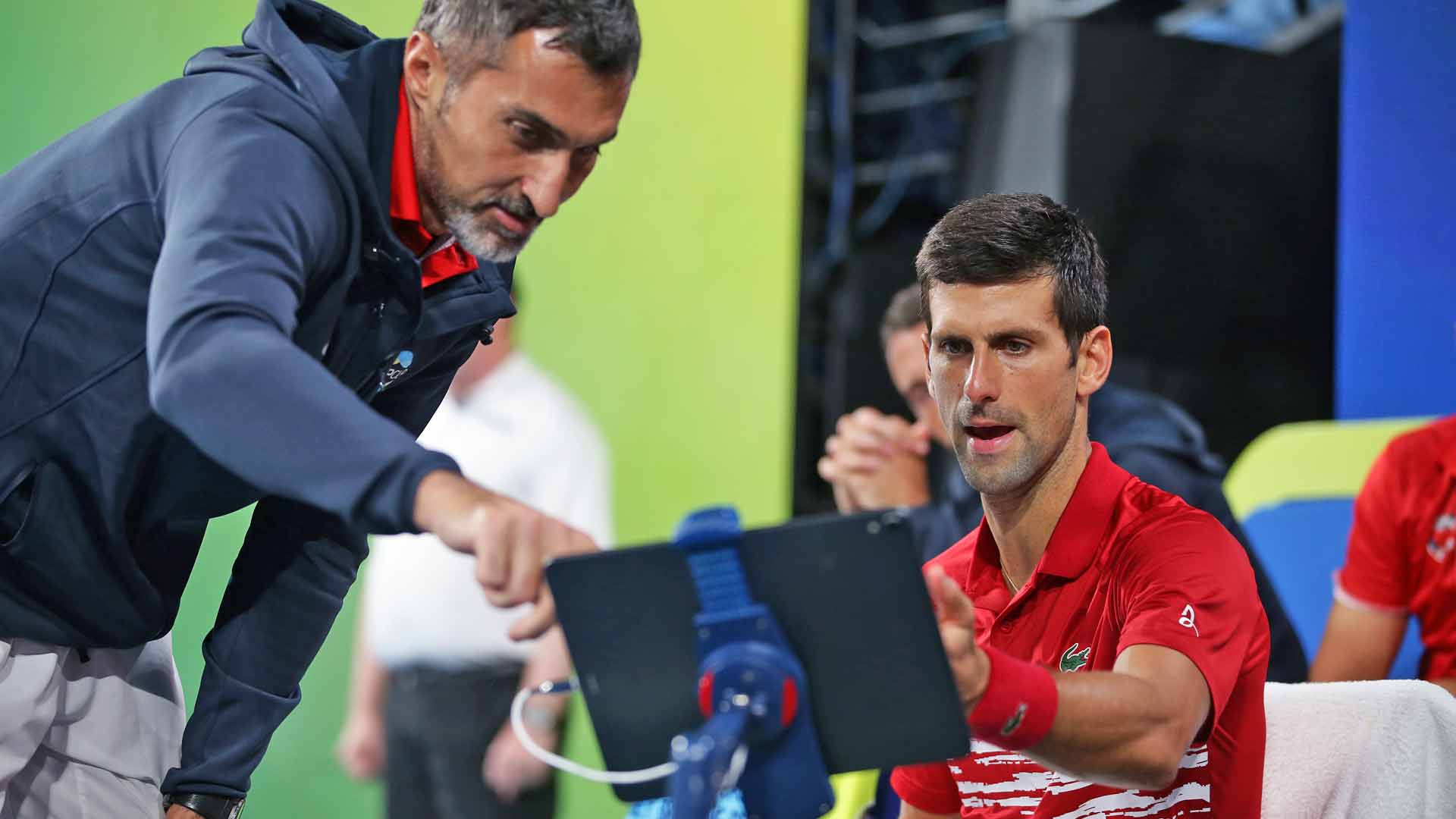 7. Strategy Rooms Give Countries New Prep Opportunity
As Austrian captain Thomas Muster said, “once you have the technology, you must use it.” That’s what players, captains and coaches alike did at the ATP Cup. Each city — Brisbane, Perth and Sydney — had a Strategy Room, where tournament staff helped facilitate various statistics and insights into matches for visitors that could make a difference in critical moments throughout this event.

In some cases, players stopped into the Strategy Room for a quick look at information about their next opponent, while some countries held team meetings in the room.

"You just tell the players, ‘Look, these are the things that I think you should work on. You’re in the wrong position here, you should be further in or you should be doing this or that,'” Muster said. “Most of the time they come and say, ‘Oh, geez, I didn’t know I’m doing this. Now I can see much clearer.'"

8. Legendary Captains Embrace New Role
Each country at the ATP Cup is led by a captain, and at the inaugural event, there were plenty of tennis legends who led their countries in pursuit of the trophy. Four former World No. 1s who took the role of captain were Boris Becker (Germany), Lleyton Hewitt (Australia), Thomas Muster (Austria) and Marat Safin (Russia). Other notable captains included 2004 Roland Garros champion Gaston Gaudio, Tim Henman and playing captains Grigor Dimitrov, Gilles Simon and Steve Darcis.

“[The] event is [a] very interesting tournament for the beginning of the year, so they can play a lot of matches. They are all friends on the team, so [it] gives [a] comfortable atmosphere inside the team. They practise together. The format is great,” Safin said. “For me, I learned a lot. Experience-wise it’s amazing. It’s very interesting, very interesting for me, too.”

9. Anyone Can Rise To The Occasion
In the ATP Cup, some countries may not have a No. 2 singles player who is near the top of the FedEx ATP Rankings, but this competition provides an opportunity for those men to show the world their game on a tremendous global stage.

Singles winners during this event include World No. 417 Dimitar Kuzmanov, No. 448 Kacper Zuk and No. 678 Aleksandre Metreveli. Kuzmanov was victorious twice.

“I knew I had the qualities to be here. It was just a matter of time and about grabbing my chance, taking my chance. I received it when we were announced to take part of this tournament, and I was really looking forward to show what I can and show I have been practising for all my life,” Kuzmanov said. “I'm happy that I'm grabbing my chances and showing what I can.”

10. For The Love Of Country
The players at the ATP Cup were first and foremost representing their country.. Throughout the tournament, fans flocked from all around the world, waving their country’s flag, sporting its colours and even parading around with instruments to create a special atmosphere for the competitors.

Argentina is more than 11,000 kilometres away, yet the Argentine players couldn’t tell the difference in Sydney, either during the group stages or the Final Eight.

“[It] was an unbelievable feeling. It's like we are playing at home,” said Guido Pella. “So it's amazing to step into the court and feel that, because we not only play for our country, it's like we play for everyone. This is a very nice feeling.”