ATP Rankings vs ATP Race To London: What's The Difference?

ATP Staff
This article contains:
Here's what you need to know about the different leaderboards

It’s that time of the year again when the attention of the tennis world begins to focus on who will qualify for Nitto ATP Finals. Only this season’s best eight singles players and doubles teams will compete at the world's biggest indoor tennis event, to be held at London’s iconic O2 arena from 11-18 November.

Players earn their place at the season finale by finishing in the Top 8 of the ATP Race To London on 5 November, when the ATP World Tour regular season concludes after the Rolex Paris Masters. The Race is a calendar-year points race that starts at the beginning of each ATP World Tour season. The players who win titles in Brisbane, Doha and Pune typically will share the Race lead after the first week of the season. 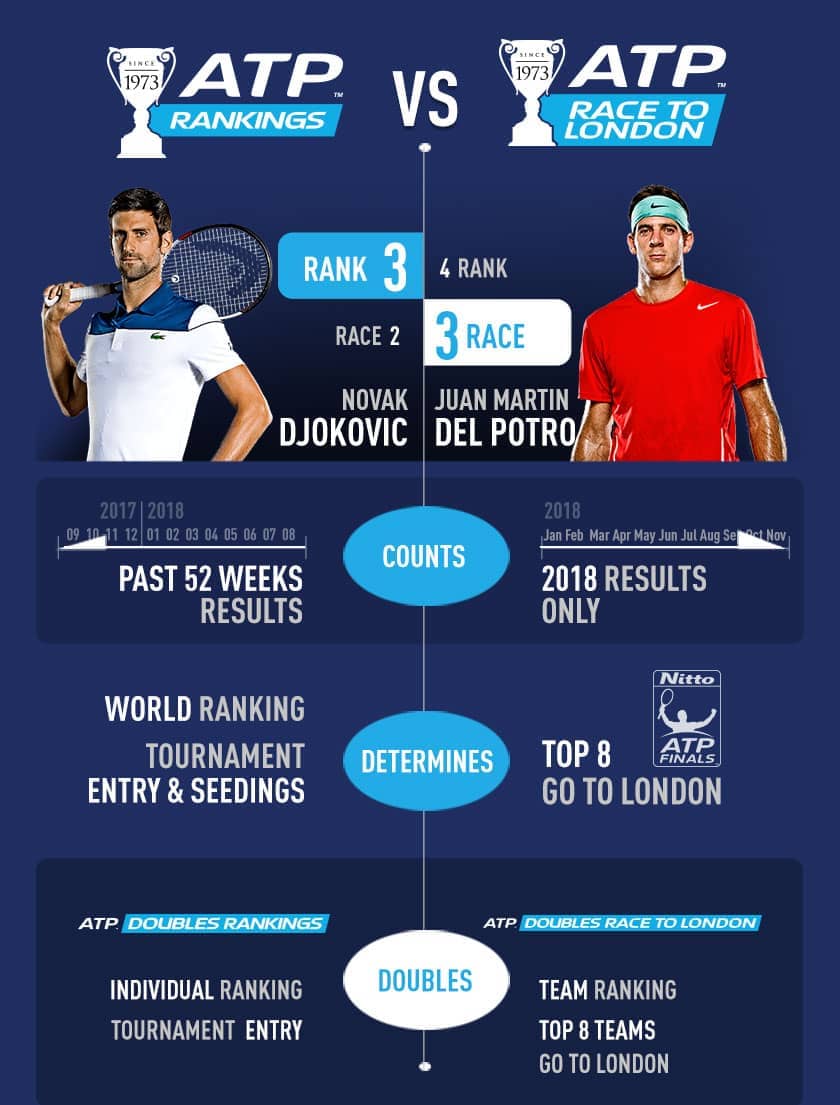 Throughout the season a player adds his best eligible results from up to 18 tournaments to his Race points tally. Winning a prestigious ATP World Tour Masters 1000 title earns the champion 1000 points. Titles at ATP World Tour 500 and 250-level tournaments return 500 points and 250 points, respectively. Players who don’t win the title still earn points based on how far they advance in the draw.

The Race differs from the ATP Rankings, the historical world rankings. A player’s ranking is determined by his best 18 tournament results over the preceding 52 weeks. A high ranking is needed to get into the world’s best tournaments and rankings also determine if a player is seeded. Rafael Nadal is known as the World No. 1 because he sits atop the rankings. Dominic Thiem is known as a Top 10 player because he is No. 8 in the rankings.

More often than not, a player’s Race standing is different to his ranking. For example, Kevin Anderson is seventh in the Race but ninth in the Rankings because he has enjoyed relatively more success in 2018 than over the longer time period of the past 52 weeks.

In the latter part of the season, a player’s focus turns to his position in the Race because it becomes an accurate predictor of what the player’s year-end ranking will be. And, of course, the Race determines who makes it to London.

Nadal, Novak Djokovic and Roger Federer are the three players who have already booked their spots at The O2. In doubles, one team – Oliver Marach and Mate Pavic – has booked its spots.

Editor’s notes: Strictly speaking, the Race begins in mid November of the preceding season (the week after the Rolex Paris Masters). Results at the Nitto ATP Finals are excluded, but players competing in late-season ATP Challenger Tour events earn points that count towards the next season’s ATP Race To London.