Rafael Nadal emerges from the 2019 Internazionali BNL d'Italia with his ninth Rome title.

A Look Back At The 2019 Internazionali BNL d'Italia

ATP Staff
This article contains:
Relive the best moments from the fifth ATP Masters 1000 of the season

Another incredible week at the Foro Italico has come to an end. From the world's best playing double duty on Thursday to night sessions that extended well past midnight, fans witnessed another edition of thrilling tennis as Rafael Nadal clinched his ninth crown in Rome and a record-setting 34th ATP Masters 1000 title. Relive the best moments of the 2019 Internazionali BNL d'Italia.

Nadal Wins Ninth Rome Title... Nadal picked up his first ATP Tour title this season with a 6-0, 4-6, 6-1 win over Novak Djokovic. The opening set was the first-ever 6-0 set in 54 FedEx ATP Head2Head meetings between the pair. After three consecutive semi-final showings during the European clay swing at the Rolex Monte-Carlo Masters, Barcelona Open Banc Sabadell and Mutua Madrid Open,Nadal broke the streak by defeating Stefanos Tsitsipas, turning the tables after losing to the #NextGenATP Greek last week in Madrid.

Cabal/Farah Defend Their Crown... Third seeds Juan Sebastian Cabal and Robert Farah successfully defended their title in Rome with a convincing 6-1, 6-3 victory over sixth seeds Raven Klaasen and Michael Venus. The Colombian duo are the first pair since Guy Forget and Yannick Noah (1986-1987) to defend their crown at this event. Cabal/Farah have been in top form during the European clay swing and also prevailed last month in Barcelona (d. Murray/Soares). 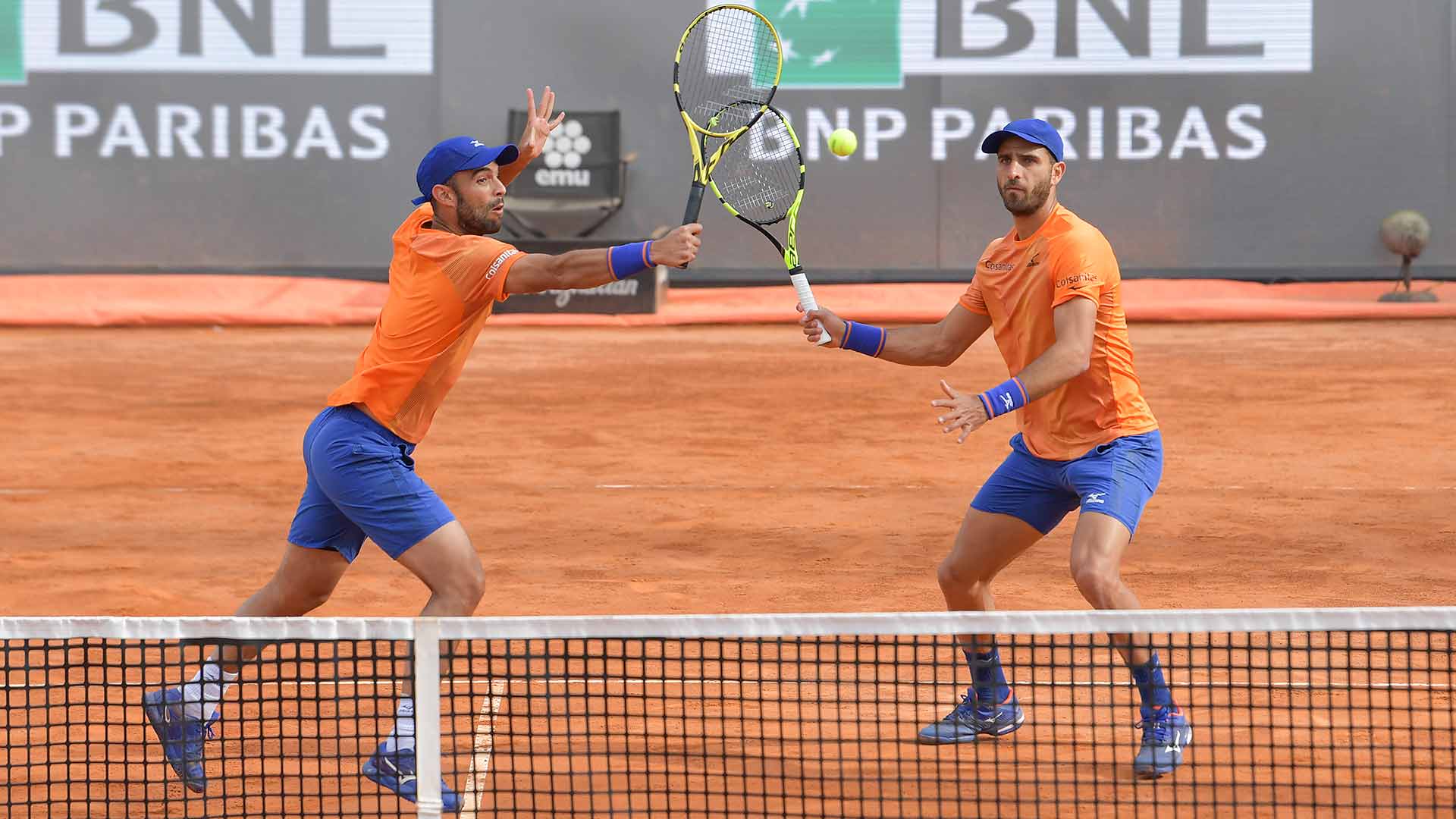 Another Big Week For Novak... Despite the loss to Rafa, Djokovic proved he's back to top form with his tennis and resilience at the Foro Italico. The Serbian put in a heroic effort to save two match points in his quarter-final win over Juan Martin del Potro and came out on top in a grueling semi-final against Diego Schwartzman. Djokovic simply ran out of steam after spending nearly eight hours on court since Friday night, but dug deep to extend the championship match to a deciding set.

Djokovic reached his 49th ATP Masters 1000 final this week (33-16) and achieved back-to-back finals in Madrid and Rome for the third time in his career.

We Meet Again... For a second straight Saturday, Nadal and Tsitsipas squared off in an ATP Masters 1000 semi-final. But this time, Nadal had the upper hand all match against the reigning Next Gen ATP Finals champion, breaking the 20-year-old Tsitsipas once in each set to advance 6-3, 6-4 and make his first clay-court final of the season.

Nadal was playing confidently, whipping his forehand crosscourt and up the line against the 6'4" Greek, whose heavy ball, in overcast Rome conditions, didn't travel quite as quickly as it did in the Spanish capital. But Tsitsipas left Rome feeling confident about his chances at Roland Garros, and about his clay-court season so far. The right-hander won the Millennium Estoril Open before making back-to-back semi-finals in Madrid and Rome.

Diego's Breakthrough... Schwartzman enjoyed two milestone moments at the Foro Italico by scoring his first Top 6 win over Kei Nishikori to reach his first Masters 1000 semi-final without dropping a set. The Argentine fell to Djokovic in three grueling sets, but won plenty of new fans with his speed and heart throughout the week. Schwartzman arrived at No. 24 in the ATP Rankings, but is projected to break back into the Top 20 on Monday. 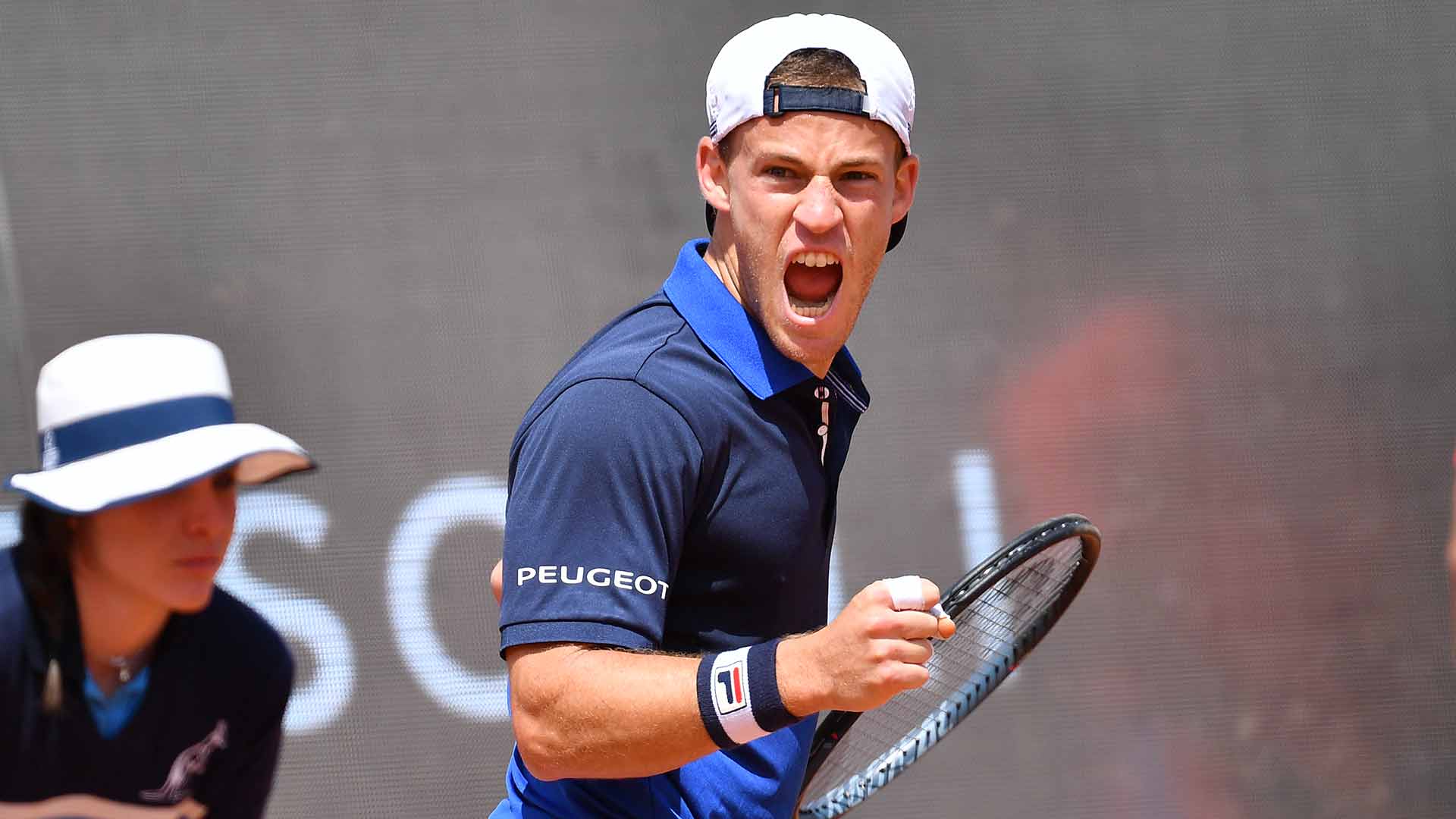 Late-Night Thriller... No one, including Del Potro, knew what to expect as the 30-year-old returned to the ATP Tour on a full-time basis this European clay-court swing. The Argentine had played only one tournament before the stretch, in February in Delray Beach, before opting for more rehab instead of more matches.

But the more Del Potro played, the better he looked. The Argentine was clubbing winners with his forehand against Djokovic in the quarter-finals, but Del Potro was also pushing Djokovic around the court with his backhand, once a weakness many players sought to exploit. That wasn't the case on Friday evening, however, as Del Potro smashed inside-out backhand winners and often outplayed Djokovic in baseline rallies.

The Serbian, however, saved both match points from 4/6 in the second-set tie-break and never lost belief, advancing after three hours on early Saturday morning 4-6, 7-6(6), 6-4 to beat Del Potro for the third time in Rome and the 16th time overall (16-4).

Federer Returns To Rome... Roger Federer continued to show that he still has plenty of great clay-court tennis left in him. The 37-year-old won two matches on Thursday, defeating Joao Sousa before saving two match points to take out Borna Coric in an epic third-set tie-break. A right leg injury forced Federer to withdraw before his quarter-final against Tsitsipas, but he'll arrive at Roland Garros with plenty of confidence after his performances in Madrid and Rome.

Manic Thursday... A wet Wednesday in Rome washed out an entire day of play, leading to a blockbuster Thursday of double-headers at the Foro Italico. All eight players who reached the quarter-finals — including Djokovic, Nadal and Roger Federer — had to win two matches in the same day to do so. Fernando Verdasco caused the first upset of the day, when he ousted Dominic Thiem after two hours and 44 minutes at 12:55. Less than six hours later, at 18:28, he closed out a two-hour, nine-minute win over Karen Khachanov to reach his first clay-court quarter-final since May 2012. 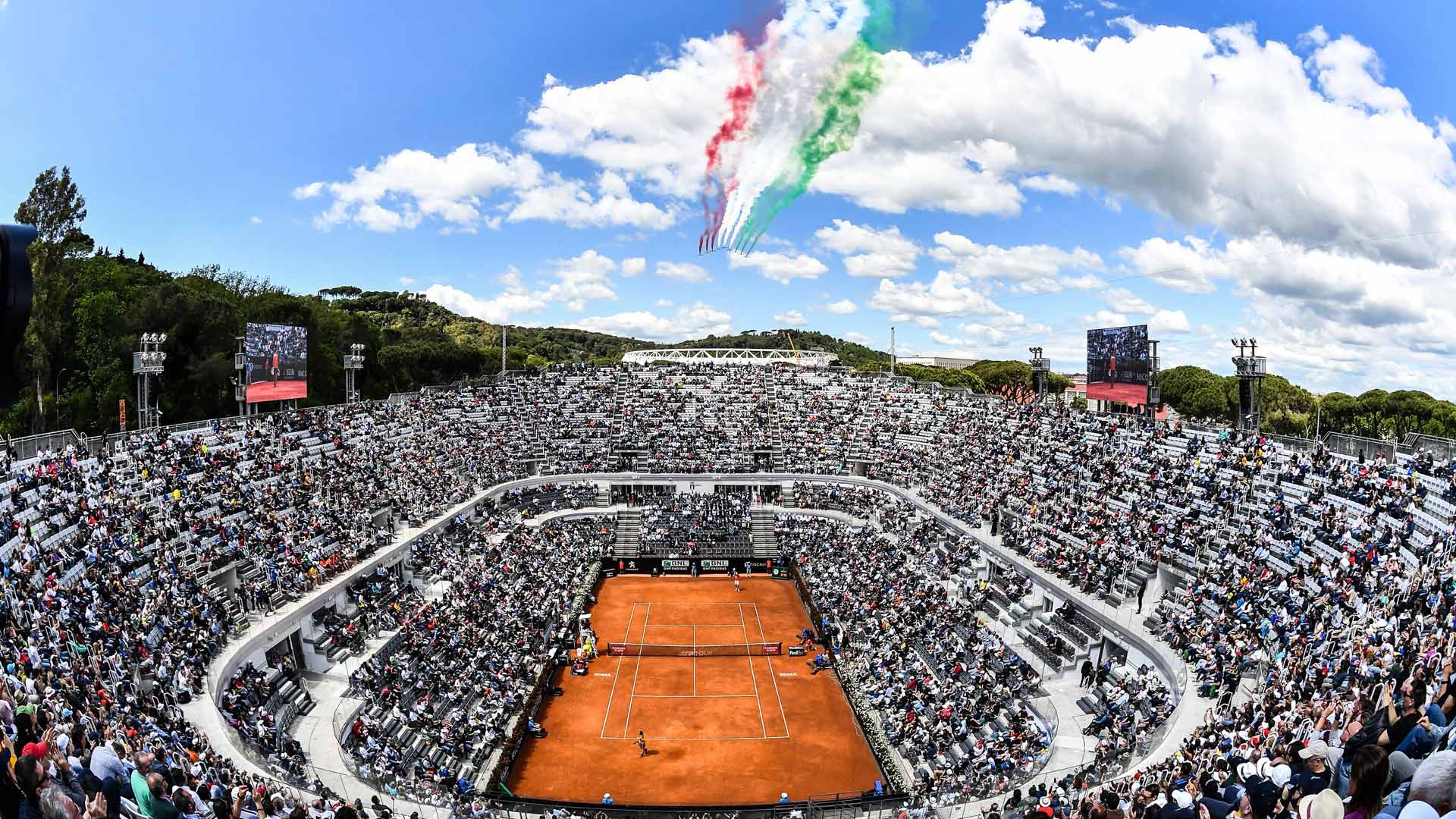 Italians Cause A Stir...  On the first day of main draw action, 17-year-old #NextGenATP Italian Jannik Sinner energised his home fans with an upset win over four-time ATP Tour titlist Steve Johnson – only his second ATP Tour win and his first at the Masters 1000 level. Rome native Matteo Berrettini did the honours on day three, knocking out No. 5 and 2017 champion Alexander Zverev 7-5, 7-5 to celebrate his first Top 5 victory in front of a rocking Roman crowd. 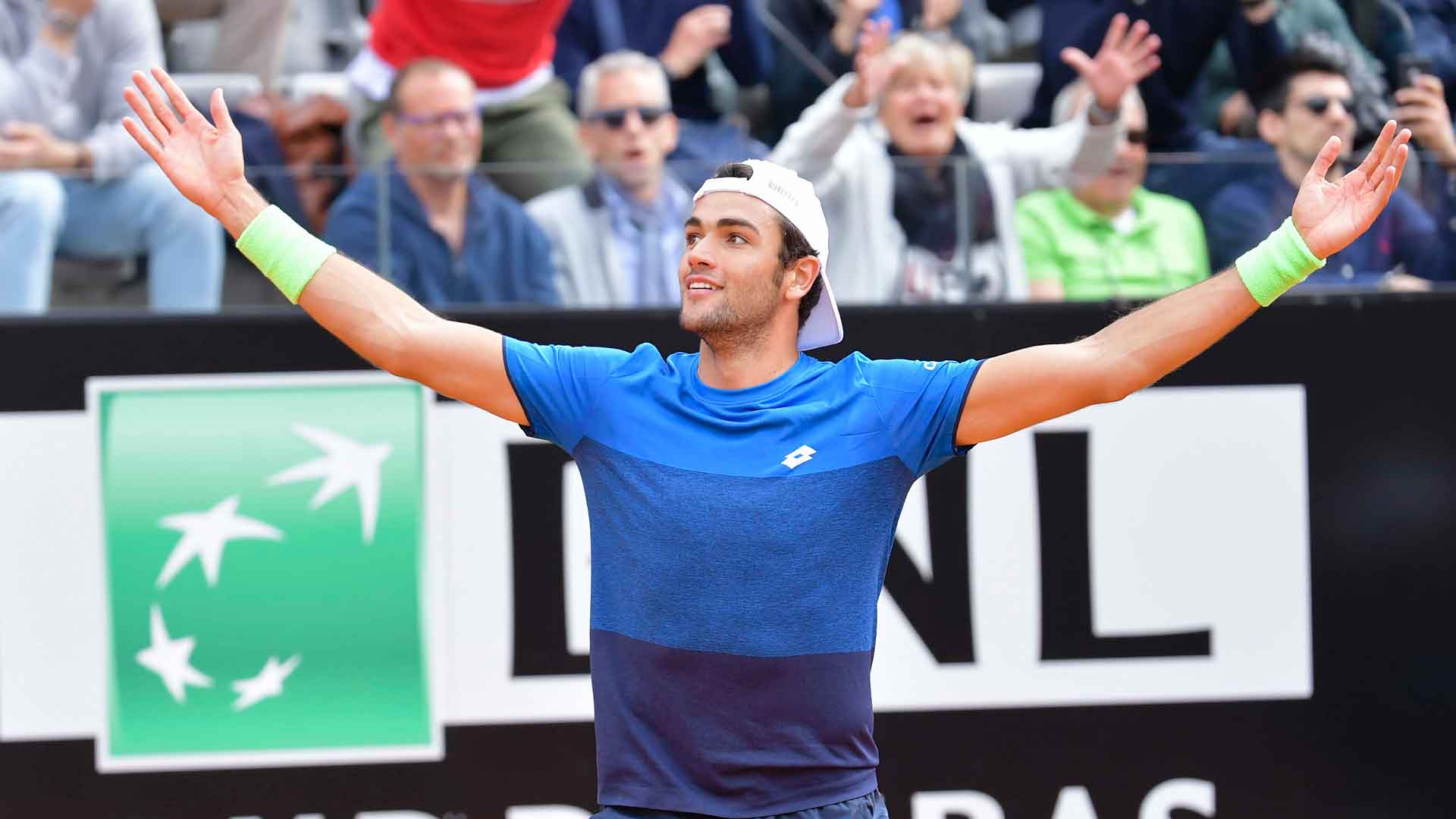 An Apology To Remember... Alexander Zverev might have lost a doubles match with brother Mischa Zverev at the Internazionali BNL d'Italia, but he left the court with a lifetime fan. Zverev put away an overhead at 3-3 in the first set against Klaasen/Venus, bouncing the ball over the fence and into the crowd. At the next changeover, Zverev greeted the young fan whom the ball hit, checking on her and tying one of his headband's around her forehead, leaving the youngster with a big smile on her face. Read More & Watch 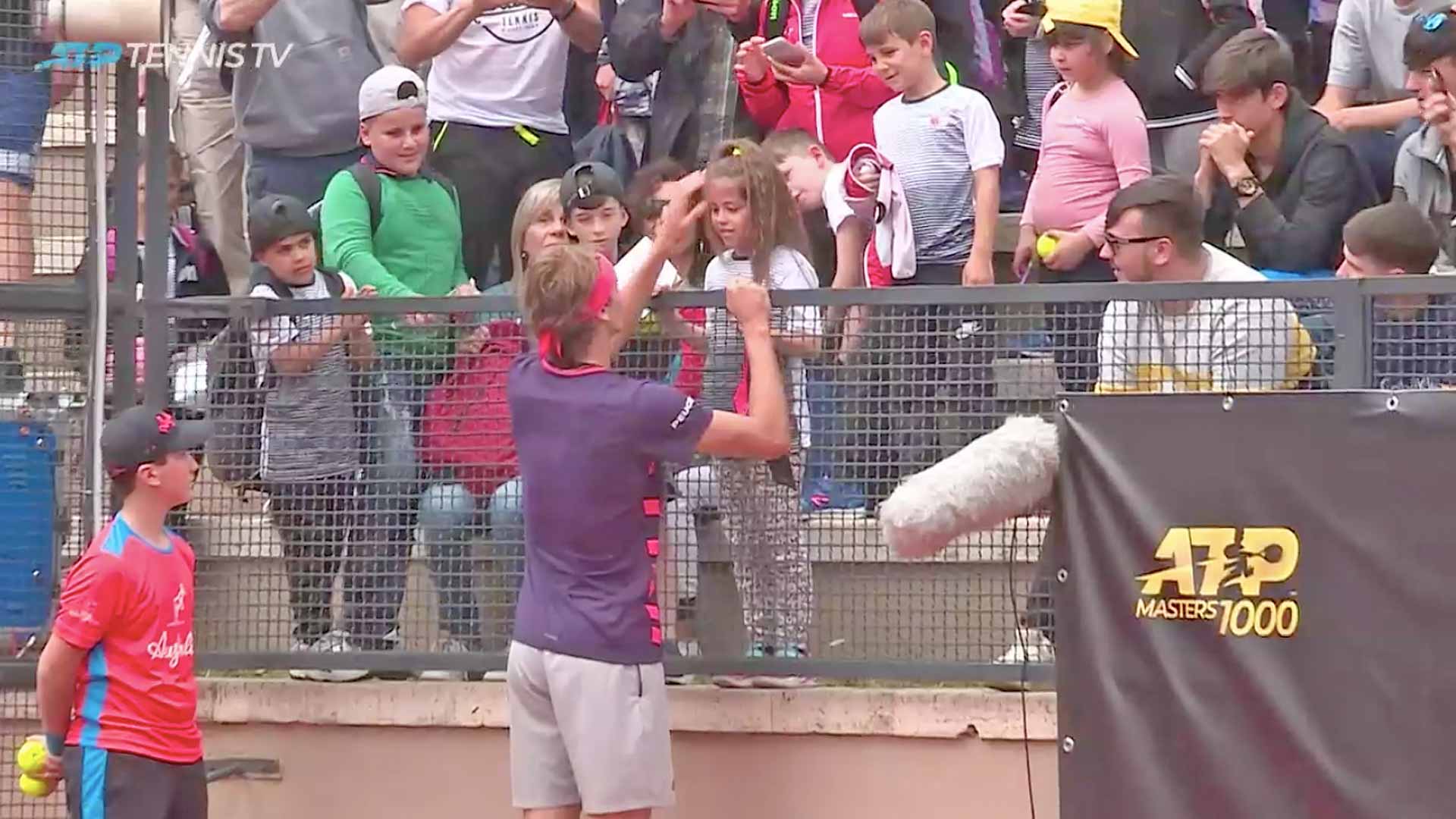