Radu Albot is the first Moldovan to win an ATP Tour title, triumphing at the Delray Beach Open by VITACOST.com.

ATP Staff
This article contains:
Albot is first player from his country to lift an ATP Tour title

Rain nor the brink of defeat could stop Radu Albot from making history on Sunday at the Delray Beach Open by VITACOST.com. The 29-year-old became the first Moldovan to win an ATP Tour title, saving three championship points and beating qualifier Daniel Evans 3-6, 6-3, 7-6(7).

Albot had never reached a tour-level final before this tournament. And in his two previous ATP Tour semi-finals, the Moldovan won just four games each time. But despite a 56-minute rain delay thwarting Albot’s momentum after he broke for a 2-1 lead in the third set, the World No. 82 held his nerve to lift his first trophy after a thrilling two hours and 51 minutes.

"It feels unbelievable. You work so much. You work your whole life, your whole career, and at the end you win a tournament," Albot said. "This is just a great feeling. I think it's difficult to put into words."

Since records have been kept, only one other player from Moldova cracked the Top 200 of the ATP Rankings. That was Roman Borvanov (career-high No. 200), who supported Albot in Delray Beach this week. Albot has set virtually every record for Moldovan tennis, adding a crown jewel with his first title. He is projected to climb to a career-high on the fringe of the Top 50 on Monday.

You May Also Like: The Motivational Moldovan: Albot Making History 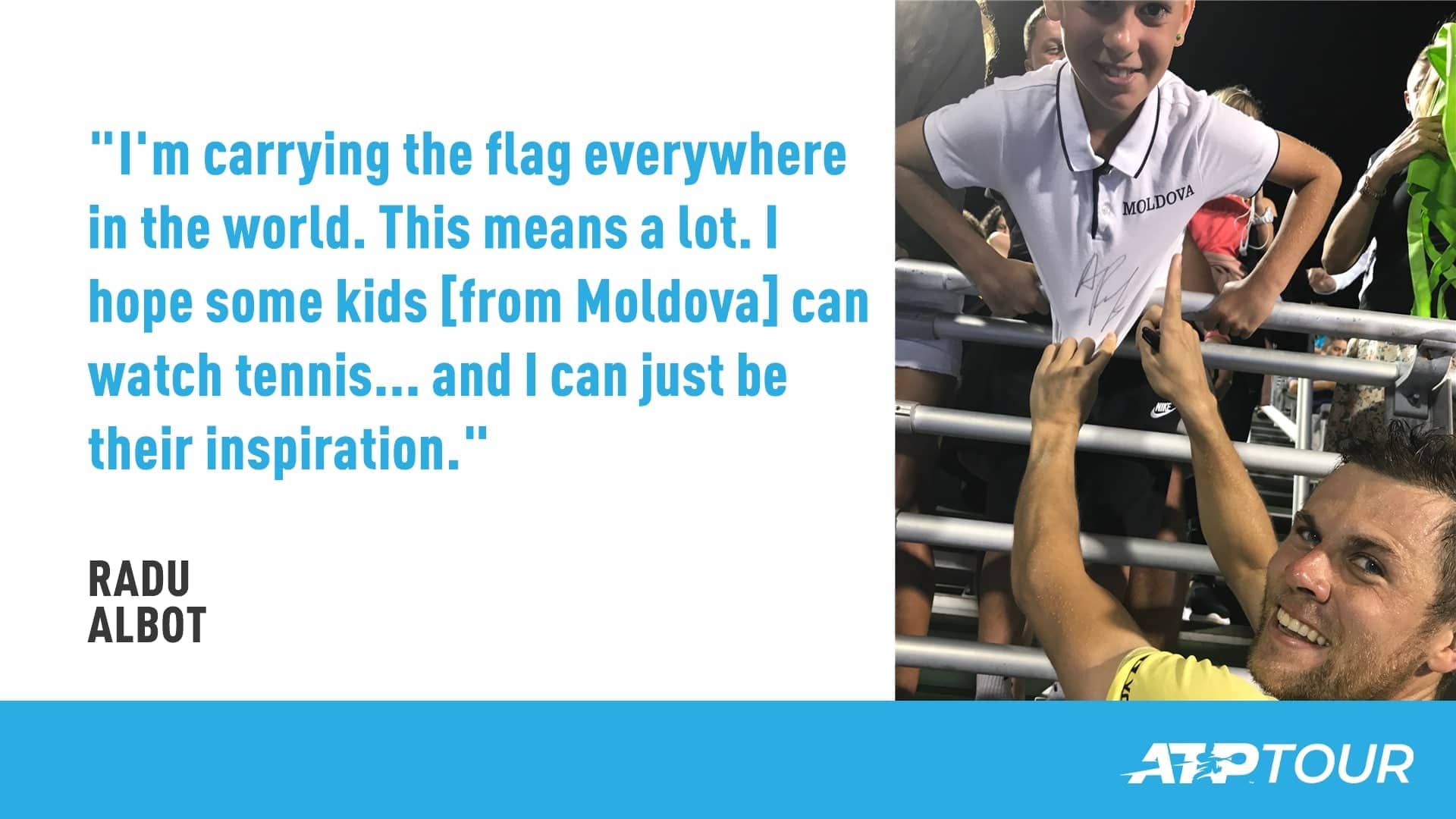 Albot’s nickname is ‘The Machine’, and he certainly looked the part on Sunday. Evans started well early, using his knifing backhand slice to keep the Moldovan from gaining much rhythm. But Albot settled down in the second set and stood his ground on the baseline, using his superior depth and weight of ball to push Evans back.

Albot, who also reached the doubles semi-finals this week with Yoshihito Nishioka, showed his comfort at net by taking any ball that Evans left short, hitting a strong approach shot and finishing off the point in the forecourt. But everything changed at 2-1, 15/0 in the decider. Rain began to fall, and play was suspended for nearly an hour.

When the competitors returned to the court in Delray Beach, Evans had some extra pep in his step. The passing shots that Albot was able to put away before the delay suddenly had extra zing in them, and Evans broke back for 3-4 by changing his pattern of play. For nearly the entire match, the Brit sliced his backhands, but Evans hit over his one-handed backhand on an approach shot, forcing a mishit error from Albot. From there, Evans was the one putting pressure on the Moldovan, getting to 15/30 on Albot's serve in the 29-year-old's next two service games.

Evans appeared destined to complete the comeback when he took a 6/4 lead in the final-set tie-break. But Evans made errors on all three of his chances, including a backhand volley from just a couple feet inside the baseline at 7/6 that sailed mere inches long. Unbefitting of the quality of the match, Evans double-faulted when he faced his first match point, allowing Albot to lift the trophy.

"He hit a good volley [on his third match point]. I have to give him credit. It's easy to say I didn't take the match points but I thought he played great in the moments he needed to play great," Evans said. "I was 2-4 down and staring down the barrel to be honest. I gave it a good go and it wasn't good enough."

Credit belongs to the Moldovan for battling from a set down for the third consecutive match. While players showed they could sometimes hit through Albot, he always stayed the course and raised his level whenever his opponents showed any sign of weakness. For his efforts, Albot gains 250 ATP Ranking points and $97,490 in prize money. The last player to win the first ATP Tour trophy for his country was Stefanos Tsitsipas, this week's Marseille champion, in Stockholm last year.

"It was not in the plan, I have to say, losing the first set and then coming back. But it worked out pretty good this week. When you lose a set, it's just half a match," Albot said. "If you want to win the match you need to win two sets. I still had chances, I got chances and I used them."

Evans, who was trying to become the first qualifier to lift the trophy in Delray Beach since Ernests Gulbis in 2013, and the first Brit to triumph in the tournament’s 27-year history, leaves with 150 points and $52,495 in prize money.

"He played some good tennis right at the end when he needed it. It's a little unlucky to lose 7-6 in the third with big chances, obviously three match points. But I don't think I did much wrong. I missed two forehands, but not by a lot."

Did You Know?
This was the first third-set tie-break in the Delray Beach final since Tommy Haas beat Xavier Malisse in 2006.