Spaniards Rafael Nadal and Carlos Alcaraz will meet for the second time in the Indian Wells semi-finals.

ATP Staff
This article contains:
World No. 4 leads the 18-year-old 1-0 in their ATP Head2Head series

Spanish legend and master of the sport Rafael Nadal will face #NextGenATP apprentice and countryman Carlos Alcaraz in the semi-finals at the BNP Paribas Open on Saturday in a battle between two generational talents.

Since capturing his first tour-level title in Sopot in 2004, Nadal has enjoyed a remarkable career, capturing a further 90 tour-level trophies, including a record-breaking 21 Grand Slam crowns and 36 ATP Masters 1000s. The World No. 4 earned his 400th Masters 1000 win this week in Indian Wells.

Following his quarter-final victory over Nick Kyrgios, Nadal was full of praise for Alcaraz as he looked ahead to both the upcoming clash and the future.

“He has a great team next to him,” Nadal said when asked about Alcaraz in his post-match press conference. “I think he will be unstoppable in terms of his career. He has all the ingredients. He has the passion. He’s humble enough to work hard. He’s a good guy. He reminds me a lot of myself when I was 17 or 18-years-old. I think he has the passion. He has the talent and the physical components.

“I am super happy. He is going to be a great rival for now and for the next couple of months, without a doubt,” Nadal said. “But thinking and being selfish, it's great. To have such a star from my country [is amazing]. It is fantastic for the tennis lovers and he's a countryman and he's a great guy. I like him. I wish him all the very best. Probably not on Saturday when he plays against me, but in general.”

The 35-year-old has continued to show little sign of slowing down this season. The World No. 4's win against Kyrgios in Indian Wells moved him to 19-0 on the year, extending his career-best start to a campaign.

However, the fourth seed’s biggest Indian Wells test lies ahead in the shape of 18-year-old Alcaraz. The teenage prodigy will enter the popcorn encounter against Nadal 12-1 on the season and is relishing the opportunity to face the man he calls his ‘idol’.

“It's amazing to play against Rafa,” Alcaraz said. “He has been my idol since I was a kid, so it's never easy to play against him, but I think it's going to be a great match. I think it's a great experience for me to play him in [a] Masters 1000 semi-final here in Indian Wells. I'm going to have fun out there and enjoy every single second in the match. It is a very special experience for me.”

You May Also Like: Alcaraz Sets SF Against 'Idol' Nadal In Indian Wells

Since storming onto the Tour two years ago at the Rio Open presented by Claro, Alcaraz has consistently turned heads.

The Spaniard’s maiden tour-level victory came against Albert Ramos-Vinolas in the Brazilian city in February 2020. Last month, at the same venue, he became the youngest ATP 500 champion since the category was created in 2009 when he clinched the title in Rio de Janeiro, signifying his rapid rise.

Between those landmark events, Alcaraz has triumphed in Umag, become the youngest US Open quarter-finalist in the Open Era, lifted the trophy at the Intesa Sanpaolo Next Gen ATP Finals and cracked the Top 20 in the ATP Rankings.

On Saturday, under the guidance of coach Juan Carlos Ferrero, Alcaraz will play Nadal for the second time in his first ATP Masters 1000 semi-final. The legendary lefty leads their ATP Head2Head series 1-0 after triumphing 6-1, 6-2 in Madrid last season. However, Alcaraz looks a different beast both physically and mentally since their last meeting.

The 18-year-old has blitzed his way through a highly competitive field over the past week at the Indian Wells Tennis Garden, dispatching Top 20 stars Roberto Bautista Agut, Gael Monfils and Cameron Norrie in straight sets. He is now the second-youngest semi-finalist in tournament history behind only Andre Agassi, 17, in 1988. Alcaraz is projected to climb into the Top 15 in the ATP Rankings on Monday regardless of his result against Nadal.

Meanwhile, Nadal has defeated Sebastian Korda, Daniel Evans, Reilly Opelka and Kyrgios en route to the semi-finals in the California desert as he aims to win his fourth Indian Wells title (2007, 09, 13).

With both reaching the semi-finals, it means Spain has multiple men in the last four in Indian Wells for the first time in the tournament’s 46-year history. If Nadal can pass the Alcaraz test and then win the title on Sunday, he will move level with Novak Djokovic on a record-equalling 37 Masters 1000 crowns.

Nadal is also aiming to clinch his fourth tour-level crown of the year, having lifted trophies at the Melbourne Summer Set, Australian Open and the Abierto Mexicano Telcel presentado por HSBC in 2022. 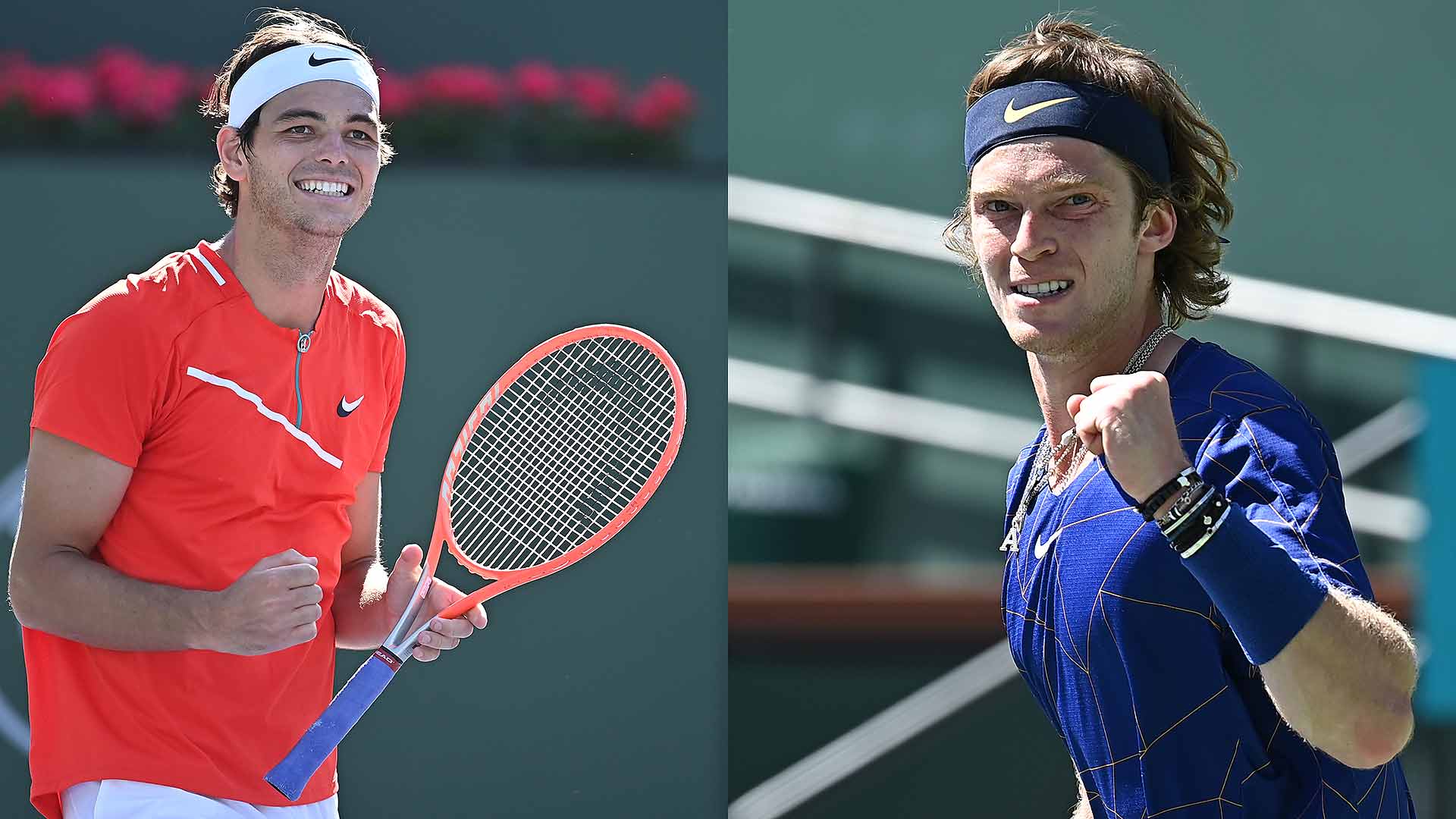 Andrey Rublev and Taylor Fritz will take the court prior to the all-Spanish showdown, with the pair having split four previous ATP Head2Head meetings. They met twice on hard courts in 2021, with Rublev winning in Dubai and Fritz at the Rolex Paris Masters.

Rublev takes a 13-match winning streak into the semi-finals as he seeks a third straight ATP Tour title following triumphs in Marseille and Dubai. Fritz has also been hot since his breakthrough run to the Indian Wells semi-finals five months ago — that result started a 24-8 run that's seen him reach five ATP Tour quarter-finals as well as the Australian Open fourth round, his career-best Grand Slam showing.

The seventh seed has been in better form en route to the final four, winning all eight sets he's played and being pushed to a tie-break just once, by 11th seed Hubert Hurkacz in the third round. He blitzed past 33rd seed Grigor Dimitrov, 7-5, 6-2, in the quarter-finals.

The American, by contrast, has played three sets and one tie-break in each of his past three outings, including consecutive third-set tie-breaks against Jaume Munar and 29th seed Alex de Minaur. But he was good value for his 7-6(5), 3-6, 6-1 quarter-final win over Miomir Kecmanovic, dropping serve just once in nearly two hours of play.

"He's a great player, talented," Rublev said of his opponent. "He's won many good matches. Has an amazing serve. Good, strong shots. Especially here on a hard surface, the way he plays, it fits him a lot.... Of course he has great potential. The way he serves is huge advantage."

The two 24-year-olds came up through the juniors at the same time and had several meetings at that level before their professional bouts. Fritz won their first ATP Tour meeting in 2018 in the Indian Wells second round, as well as their most recent matchup in Paris in November — a 7-6(2), 7-5 contest that featured just one break of serve and one break point for each man.

"I always feel like I play really good tennis when I play against him," Fritz previewed. "I hit well off of his ball. It's a lot of big hitting back and forth. I know I'm going to have to serve like I've been serving. I'm definitely going to have to step it up from the baseline."

The first semi-final is scheduled for 1 p.m. local time, with Nadal and Alcaraz to follow.