Rafael Nadal crashed Carlos Alcaraz’s 18th birthday bash as he moved into the third round of the Mutua Madrid Open with a 6-1, 6-2 victory on Wednesday.

Fans at Manolo Santana Stadium sang ‘happy birthday’ as Alcaraz stepped onto the court against his childhood idol. But even in his country’s biggest tennis court and under the watchful eye of Spanish sports legends like Iker Casillas and Raul, Alcaraz showed no sign of nerves as he came out swinging.

You May Also Like: Ferrero & Moya Preview Nadal-Alcaraz Showdown In Madrid

“He has a lot of potential. He's young and [a] good guy,” Nadal said. “He already has a great level of tennis today, but I really believe that he’s going to be a fantastic player in the near future.

“I wish him all the very best. [As a] Spanish player and Spanish [tennis] fan, I really believe that we need somebody like him, and it's great to have him here.”

The generational second-round clash was more than just a showcase of the present and future of Spanish tennis. Both players are coached by Spanish greats and former World No. 1s, with Juan Carlos Ferrero in Alcaraz’s box and Carlos Moya in Nadal’s.

The top seed advanced to the third round, where he will face qualifier Alexei Popyrin next. The Aussie took down 14th seed Jannik Sinner 7-6(5), 6-2 on Court 3 to book his first meeting with the Spaniard.

“He has a huge serve, great forehand, young... Another tough opponent. But here we are in Masters 1000, so we can't expect another thing,” Nadal said. “I hope to be ready to play well. That's what I am going to need every single day if I want to have chances to keep playing. Tomorrow is another tough battle. I hope to be ready.”

Alcaraz set the tone early on and pushed the Barcelona winner to break point in his first service game. But the World No. 2 held firm and powered his way to a break in the next game, taking a 2-0 lead. Alcaraz did well to stay toe-to-toe with the five-time champion, but he over extended himself on a backhand lob at 2-0, 15/15 after a long rally and needed a medical time out.

Nadal reeled off the next three games as Alcaraz struggled to regain his footing, and the top seed claimed 12 of the last 15 points to close out the opening set. Nadal's heavy top spin pushed Alcaraz behind the baseline, and he dictated the rallies with his forehand to keep the ball out of his opponent’s strike zone.

Too many unforced errors undid the teenager’s efforts, and Nadal’s clinical performance didn’t allow him to find his rhythm in the second set. With Spanish fans willing Alcaraz on, the wild card broke Nadal's serve at 3-1. But Nadal broke straight back, and closed out the victory after an hour and 13 minutes.

Did You Know?
Carlos Alcaraz claimed his maiden ATP Masters 1000 victory in the first round of the Mutua Madrid Open. In the process, the then-17-year-old became the youngest match winner in tournament history – breaking the record set by 18-year-old Rafael Nadal in 2004. 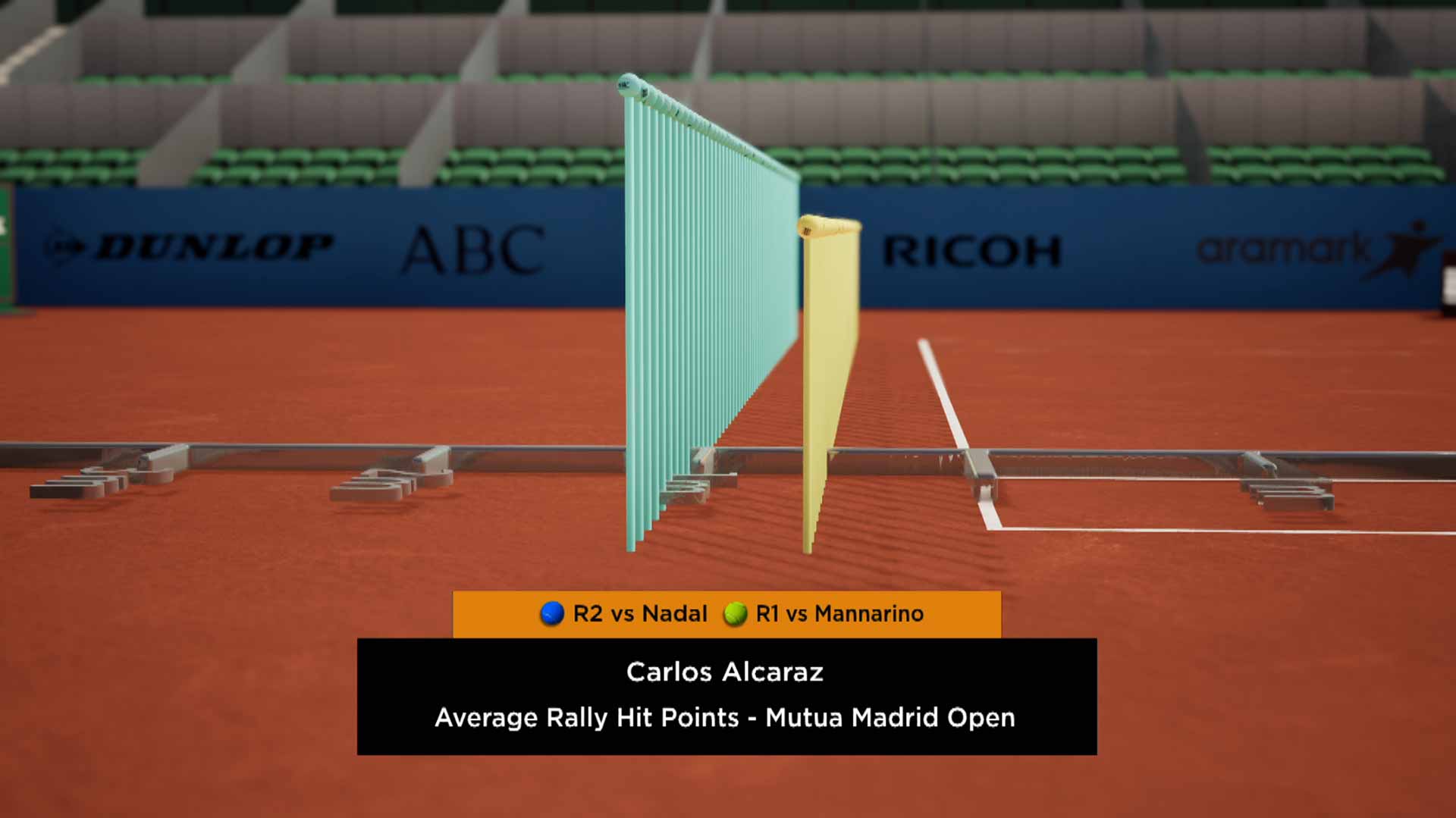 - Graphic courtesy of Hawk-Eye Innovations/ATP Media
- Take a deep dive into this match with Match Insights powered by Infosys NIA
More stories like this in:
Premier Partner