ATP Staff
This article contains:
Teen is now 4-1 in five-setters

Carlos Alcaraz bent on Wednesday at Roland Garros, but the 19-year-old Spaniard refused to break.

"I feel tired," Alcaraz said in his on-court interview, cracking a laugh. "It has been a great battle against Albert. I knew that it was going to be a great match, tough match. We fought until the last point. I'm so happy with the performance today."

Alcaraz was the talk of the tennis world leading into the clay-court major, having defeated Rafael Nadal, Novak Djokovic and Alexander Zverev en route to his second ATP Masters 1000 title in Madrid. But Ramos-Vinolas had the teen one point from a shocking early exit.

For much of the match, Alcaraz was frustrated by his 34-year-old left-handed opponent and struggled to find solutions, which has been a rarity this season. The 19-year-old converted just seven of his 31 break points, putting him in a deep hole.

But while Alcaraz earned his first 29 wins of the year through astonishing skill, he claimed his 30th through sheer will. The teen triumphed after four hours and 34 minutes to earn a clash against American Sebastian Korda.

"I'm so happy to live this experience in front of you guys. Thank you very much!" Alcaraz told the crowd.

Alcaraz rallied from 0-3 in the fifth to move ahead by a break at 4-3. But Ramos-Vinolas, who was seeking his second win against a Top 10 opponent at a major, did not go down without a fight. Alcaraz missed a forehand into the net to allow his countryman back on serve.

But the sixth seed played what might be the defensive point of the tournament to earn another break, fending off two Ramos-Vinolas overheads before the lefty dumped a backhand volley into the net. Alcaraz raised his arms like a championship boxer as the Court Simonne-Mathieu crowd leapt to its feat, while Ramos-Vinolas threw his racquet into the terre battue in disappointment.

This time, Alcaraz did not relinquish his lead, blasting a ball into the Parisian sky after finally completing his victory. Despite 74 unforced errors contributing to his trouble, the Spaniard crushed the same number of winners compared to just 32 winners for Ramos-Vinolas.

So often Alcaraz is able to bend players to his will with his powerful groundstrokes and deft drop shots, especially on the forehand side. Few opponents this year have been able to find a way to take the teen out of his rhythm. 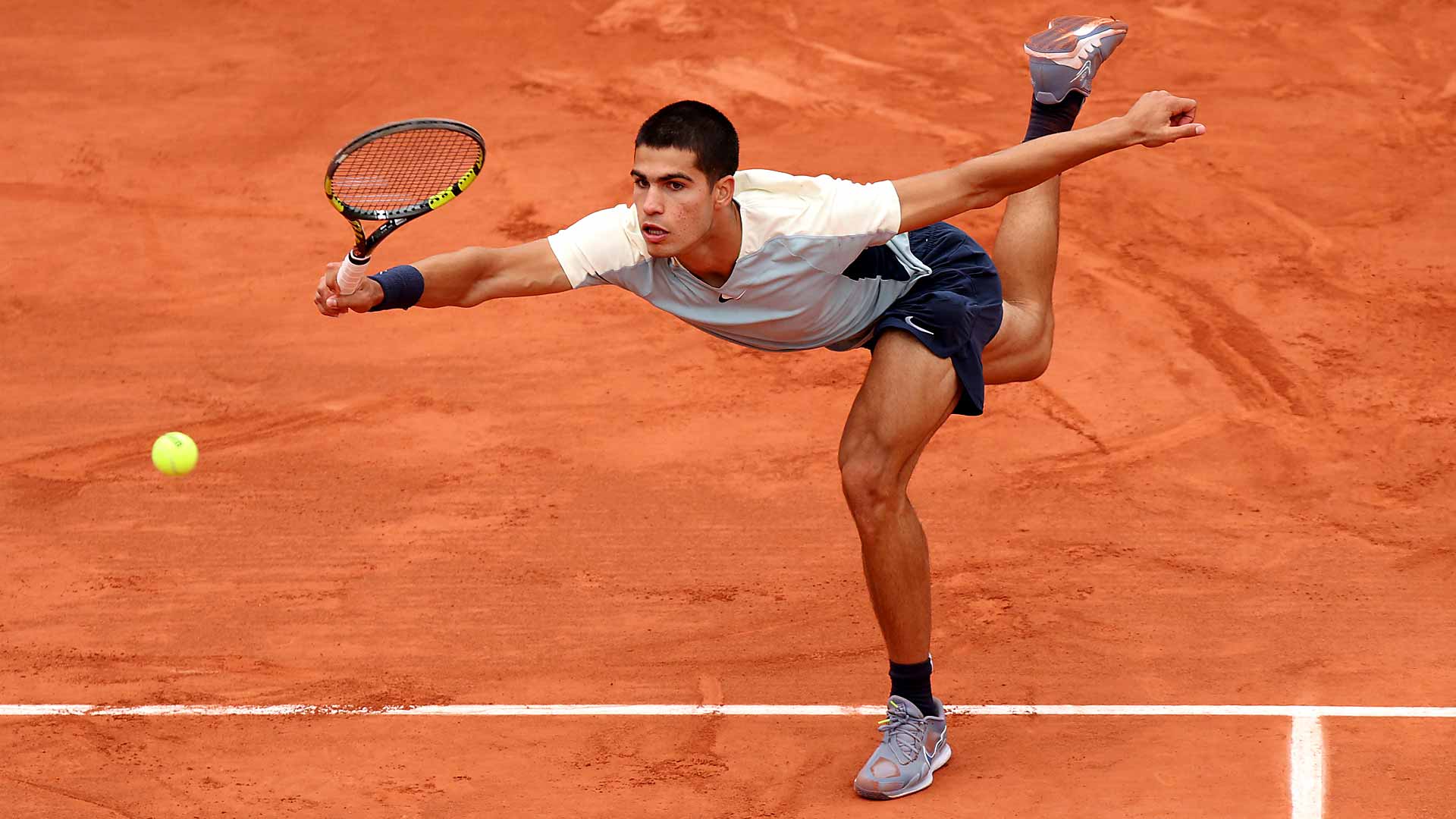 Photo Credit: Adam Pretty/Getty Images
But Ramos-Vinolas tracked down many of his countryman’s drop shots and made him pay, while also dictating the action with his heavy forehand and lefty serve out wide in the Ad court. That helped put him in position to serve for the match at 5-4 in the fourth set, earning a match point in the game.

But Alcaraz showed no fear with his back against the wall, obliterating a 131mph overhead off the bounce for a winner to earn his second break point of the game. Ramos-Vinolas cracked on the next point when he missed a backhand into the net, sending the crowd into a frenzy.

From that moment, the free-flowing Alcaraz who has dominated the headlines this year surged to the forefront with stunning shotmaking from all areas of the court. He played a nearly flawless fourth-set tie-break to force a decider. Screams of frustration suddenly turned to roars of celebration.

That momentum came to a screeching halt when Ramos-Vinolas raced to a 3-0 lead in the fifth. But once again, despite plenty of missed opportunities, Alcaraz never gave up. The teen got back on serve with more jaw-dropping defence, sprinting from side to side and somehow sliding a backhand passing shot up the line past a stunned Ramos-Vinolas.

Alcaraz now leads the pair's ATP Head2Head series 3-0. Ironically, the reigning Intesa Sanpaolo Next Gen ATP Finals first broke onto the scene two years ago as a 16-year-old outside the Top 400 of the Pepperstone ATP Rankings in Rio de Janeiro, where he shocked Ramos-Vinolas in a three-hour, 37-minute thriller.

Korda hit 50 winners and converted five of his nine break points to advance after two hours and 19 minutes. The 27th seed and Alcaraz also met in the championship match at last year's Intesa Sanpaolo Next Gen ATP Finals, where the Spaniard emerged victorious in straight sets. That was played on an indoor hard court, while their Monte Carlo clash was on outdoor clay.