Inside Look: How Carlos Alcaraz Recovered From His 4+ Hour Marathon

Game, set and match. Once those words have been uttered, a long, painstaking process begins — one which is far less visible than the forehands, the serves and the volleys. Looking after the body of a player has become an essential role on the ATP Tour, so much so that dotting the i's and crossing the t's can have a significant effect on the outcome of a match. On Carlos Alcaraz's team, this job falls to physio and fitness coach Juanjo Moreno.

On Wednesday the 19-year-old Murcia native needed four hours and 34 minutes to seal his passage to the third round of Roland Garros, coming through a demanding physical and mental battle against fellow Spaniard Albert Ramos-Vinolas. Having saved a match point, Alcaraz eventually won 6-1, 6-7(7), 5-7, 7-6(2), 6-4.

But what happens between the teen's return to the locker room and his next appearance on Court Philippe Chatrier Friday night against Sebastian Korda? Before taking a deep dive into the question for ATPTour.com, Moreno notes a key point. "The most important thing is maintaining the routines we have established, more than the duration or intensity of a match," he explained. "It's important to do what is necessary in the moment and not get bogged down in celebrations or anything else that might distract the player." 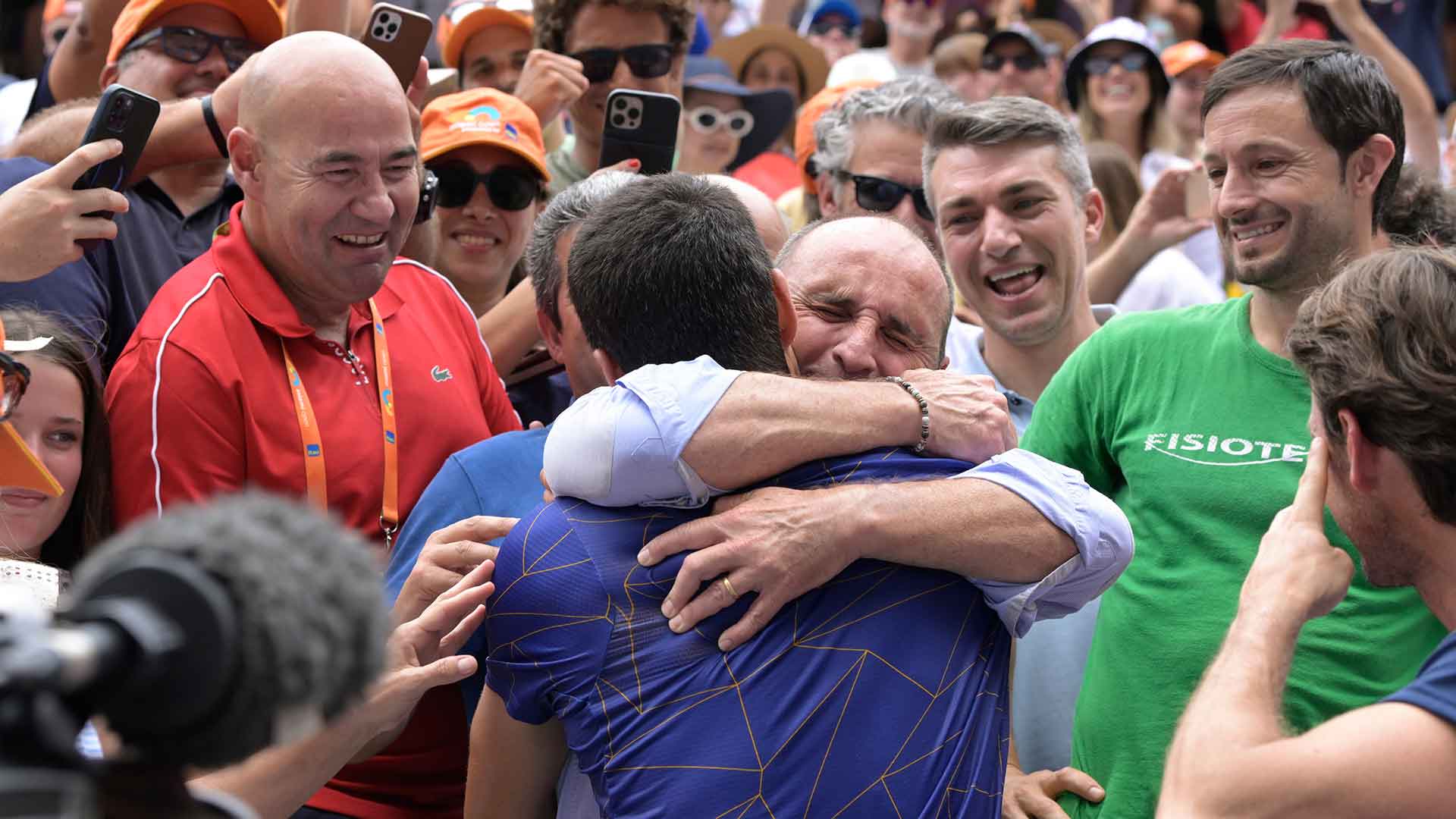 The first step is the exercise bike. No sooner than the match was over, the Spaniard made his way to the gym with his fitness coach and physio. "I always put him on the bike to compensate for Newton's third law, which explains that any body applying a force on another leads to an equal force in the opposite direction — and that means that every force Carlos applies on court has an equal and opposite response on his body," he explains. "That is, his joints, ligaments, tendons and muscles have to absorb the force efficiently."

He achieves this through cyclic movement, where there is no impact. "We use the bike for active recovery," Moreno says. "The body returns to calm, cooling down, while the circulatory system returns to its base. We deactivate the pressor reflex, which is activated during exercise in competition, and the hormone levels normalise."

It is then that Alcaraz starts a process that Moreno calls the three R's: Rehydrate, Refuel and Rebuild the muscle. "We try and have him drink quite a large quantity of water to replace what was lost, because it's one of the best sources of recovery," he says of his player's rehydration.

"Then, we turn our attention to the muscular glycogen deposits, which have emptied during physical activity", he says of the refuelling. "It's important to replace them early, because it ensures quicker recovery and, therefore, muscle repair."

The muscular damage caused during the match is combatted with a shake. "We're using 3:1 Recovery [drink]… which has a 3:1 ratio of carbohydrates — to refill the glycogen deposits — to proteins. But it also has amino acids in those proteins that help us recover the damaged muscle tissue."

Finally, Moreno talks about another facet to consider: the immune system. "It is altered or affected by physical exercise and you have to try and regenerate its values. To do so we use natural anti-inflammatory fats that help us care for this system."

At tournaments such as Roland Garros, there is another step to the process: hot/cold contrast baths. "With them we achieve vasodilation and vasoconstriction — an increase in the diameter of the blood vessels — which we use for a type of drainage for any swelling that may have occurred. This hot-cold treatment also allows us to improve the autonomic nervous system, look after the immune system and, finally, relax the muscle tone."

Several hours have passed since Alcaraz shook hands on Court Simonne-Mathieu. He is still yet to eat dinner.

"We focus on healthy fats and the replenishment of proteins, because we have already restored the deposits with the shake," reveals the World No. 6's fitness coach.

After ingesting food, physiotherapy comes into play. "We pay more attention to any niggles that may have come up during the match and, also, we activate the recovery systems I spoke about before," Moreno continues. "One of the most important phases still remains: restorative sleep.

"A good sleep, if we've taken the correct preceding steps, will be able to prepare Carlos' body for the next day in the best conditions possible."

On the rest day, the physio also plays a vital role. "On Thursday, based on what he told me after the match, we did exercises focused on recovering all these areas and at the last minute of the afternoon we fine-tuned his body so that he's in the best condition possible on Friday," Moreno concluded.

Everything is now in place for Alcaraz to compete against Korda. All he has to do is wait for the clock on Court Philippe Chatrier to read 20:45.

Editor’s Note: This story was translated from ATPTour.com/es