Alex Olmedo won the Australian Championship and Wimbledon in 1959.

James BuddellChief Writer
This article contains:
Hall of Famer was known for his style and sportsmanship

Alex Olmedo, the 1959 Australian Championship and Wimbledon titlist, passed away on Wednesday aged 84 due to brain cancer.

Olmedo, the son of a court caretaker, was born and raised in Peru, first hitting a ball at the International Club of Arequipa, where he was a ball boy. Olmedo made his major championship debut aged 15 at the 1951 US Nationals at Forest Hills and was the best player in Peru by the age of 17. Before long, $700 was raised and in February 1954, Olmedo travelled from Lima to Los Angeles, unable to speak a word of English.

Coming under the wing of Perry T. Jones, one of the most powerful officials in amateur tennis, Olmedo thrived and attended Modesto Junior College. He was recruited by George Toley, the pro at the Los Angeles Tennis Club, for the University of Southern California. On a student visa, he studied business and won the 1956 and 1958 NCAA singles and doubles titles.

In late 1958, after almost five years' residency in the United States, Olmedo made his Davis Cup debut for his adopted country, going 6-0 in two ties under the captaincy of Jones, who had fought so hard for his inclusion on the team. Upon clinching the tie-winning point in Brisbane over Australia’s Ashley Cooper, Olmedo yelled to Jones, “We did it, Cap. We’ve won the cup!” His father, Salvador, wept upon hearing the news in Peru, which did not have a Davis Cup team at the time. His mother, and younger brother, Jaime, were delighted when Olmedo toured his native land with the trophy later on. The following year, Australians Neale Fraser, Rod Laver and Roy Emerson gained revenge in the Challenge Round.

Olmedo, known as ‘The Chief’ because of his Inca heritage, was renowned for his style, artistry, big serve, forehand drive and good sportsmanship. Modest and likable, Olmedo captured the 1959 Australian Championships over Fraser 6-1, 6-2, 3-6, 6-3, then took his attacking game to the All England Club at Wimbledon, where he took apart Emerson 6-4, 6-0, 6-4 in the semi-finals and Laver, 6-4, 6-3, 6-4 in the title match. An active amateur for just two years, he rounded out his career at the US Nationals, the same year, losing to Fraser 6-3, 5-7, 6-2, 6-4 in the final. In doubles, he partnered Ham Richardson to the 1958 US Nationals crown (d. Sammy Giammalva Sr./Barry Mackay). 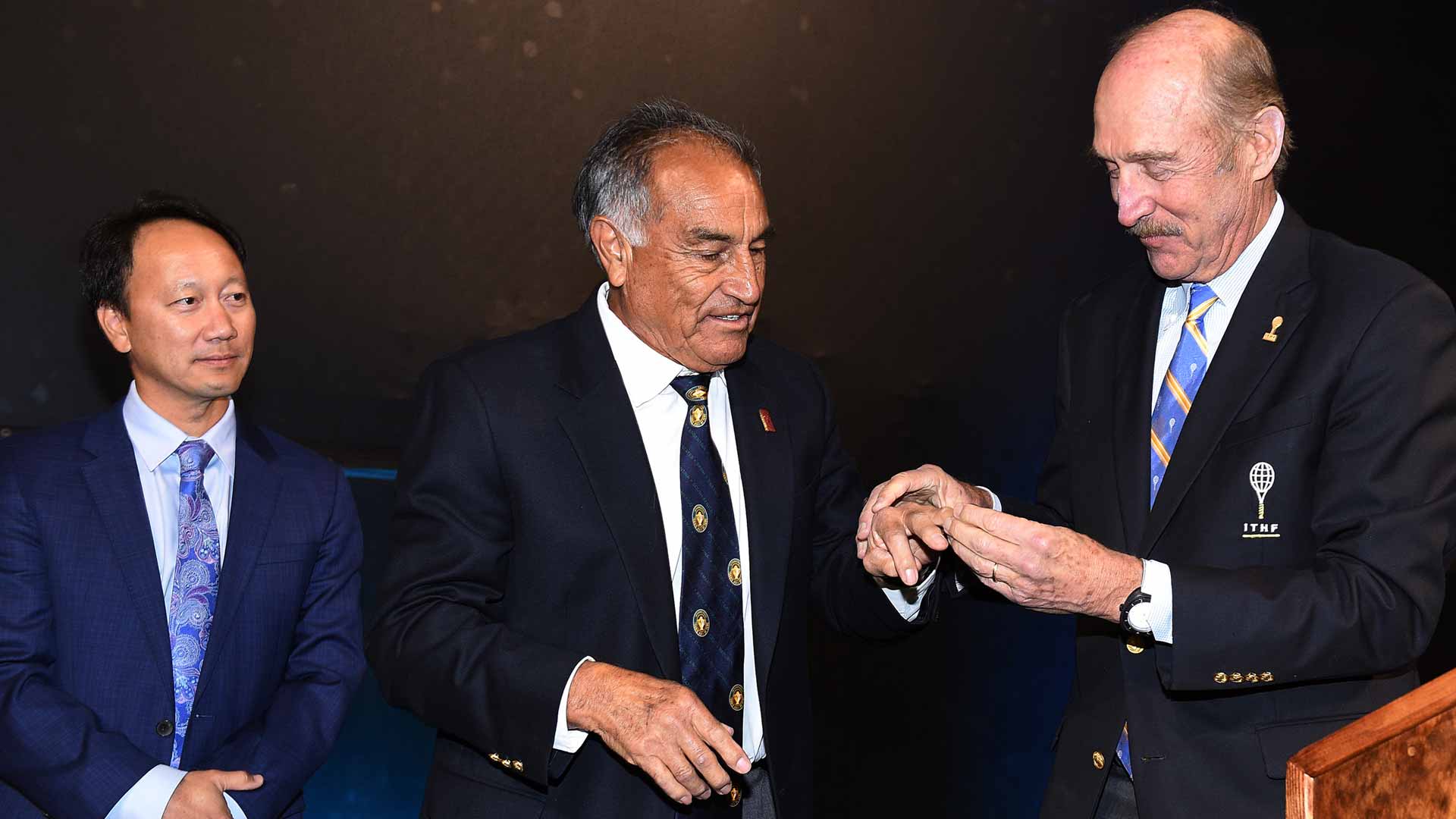 Stan Smith presents Olmedo with his International Tennis Hall of Fame ring in 2017.
Lance Tingay, the doyen of tennis correspondents for The Daily Telegraph of London, adjudged Olmedo to be World No. 2 in 1959, his final year as an amateur. Upon turning pro, the 5’10” right-hander beat Tony Trabert 7-5, 6-4 for the US Pro title and retired five years later. He coached Hollywood stars for more than 40 years at the Beverly Hills Hotel and was inducted into the International Tennis Hall of Fame in 1987.

Olmedo is survived by his children, Amy, Angela and Alejandro, Jr.

Stan Smith, the International Tennis Hall of Fame President, said: “Alex Olmedo came from humble beginnings and he made sacrifices and worked hard to chase his dreams of a tennis career, ultimately becoming a major champion and Hall of Famer. He was a terrific player and a Davis Cup hero. Personally, we shared a love for the USC Trojans, Davis Cup competition, and tennis overall. He was a great champion, a great friend, and he will be missed.”