John Isner and Kevin Anderson embrace after Anderson defeats the American to win the longest semi-final in Wimbledon history.

Kevin Anderson won the longest semi-final in Wimbledon history (since 1877) against American John Isner at The Championships on Friday to reach his second Grand Slam final (also 2017 US Open).

“You're really in a war of attrition out there,” said Anderson. “It's way beyond a normal tennis match or tactics. I mean, it's just who's going to outlast each other... [But] I've put myself into the finals of Wimbledon, which is half of a dream come true. ”

It was the longest match on Centre Court, beating the previous record of 41-year-old Richard Pancho Gonzales outlasting fellow American Charlie Pasarell 22-24, 1-6, 16-14, 6-3, 11-9 in five hours and 12 minutes over two days in 1969. The longest match at Wimbledon - and the sport's history - is Isner's 70-68 fifth-set victory over Nicolas Mahut of France in the 2010 first round over 11 hours and five minutes.

“I don't know what got me through today's match other than just a will to try to succeed, keep pushing myself,” admitted Anderson. “I knew it was going to be a tough match playing John… The match was so even throughout. I obviously felt I had a few chances in the third set serving for it. Even in the [third set] tie-break, I had a set point and hit a double fault. He played some great points.

“I think one of the reasons for the double fault was [that] I felt like he was being really aggressive on my serve [and] that forced me to go for a little bit more. Then once you're in the fifth set, in those sort of settings, on the court for over six hours, it's really tough [on your body]. You just have to try to keep going. I tried as much as I could to just keep fighting. I take a lot of pride in that. Fortunately, I was able to find a way over the finish line.”

Isner, who came within two points of victory at 6-5 in the deciding set, recovered from 0/30 on six occasions in the epic finale, before Anderson broke serve at 24-24. The South African, who looked fresher throughout the fifth set, fell over when hitting a backhand return with Isner serving at 0/15, then got up to strike a left-handed forehand during a short rally en route to breaking serve.

"I feel pretty terrible," said Isner. "My left heel is killing me. I have an awful blister on my right foot. I've felt better before. A few days' rest, maybe more than that, and I'll recoup and try to get all healed up again.

"Hats off to Kevin. He stayed the course incredibly well, played very well. It was a good win for him. He earned it, so. He played pretty well, I think, in the fifth set. I didn't have many chances."

The 32-year-old Anderson, who has now beaten Top 10 opponents in successive matches on grass courts for the first time, could rise to a career-high of No. 4 in the ATP Rankings on 16 July. He recovered from two sets down to beat eight-time champion Roger Federer 13-11 in the first set of Wednesday’s quarter-finals.

Anderson, who hit 118 winners, including 49 aces, past Isner will now prepare to meet World No. 1 and two-time former champion Rafael Nadal of Spain or Serbian No. 12 seed Novak Djokovic, the three-time Wimbledon champion, on Sunday. Anderson is 0-5 against Nadal in their FedEx ATP Head2Head series and is 1-5 lifetime against Djokovic. 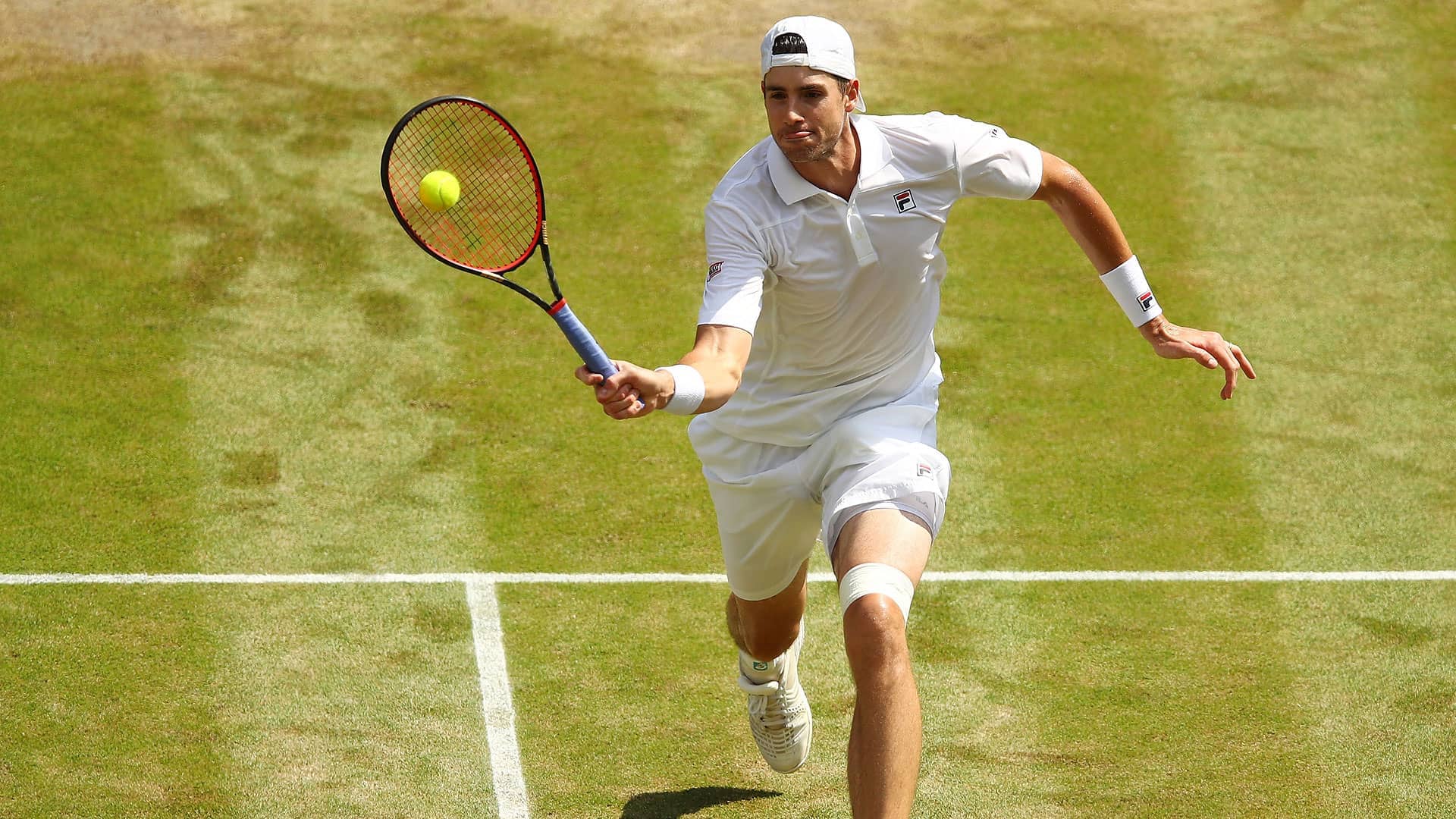 Isner was at his aggressive best in the early stages and came close to capitalising on Anderson’s tendency to hit his serve to Isner’s forehand. Anderson also got himself into trouble by dropping his backhands short, which provided his opponent a way back into the point. Isner’s best opportunity to break came on his third of three break points at 1-1, when he narrowly missed a backhand crosscourt volley. Anderson, who had been broken on nine occasions in five previous matches, breathed a huge sigh of relief to come through the 13-minute game.

At 4-5, Isner, who had not been broken in 99 service games during the grass-court major this year, struck a double fault at 30/30 to gift Anderson a set point, which he saved with an unreturned second serve. In an inevitable tie-break, Isner ripped a forehand winner to open up a 3/1 lead and went on to gain a 4/2 advantage before he lost three straight points. Anderson saved one set point with a smash at 6/6, then set up his first set-point chance with a crosscourt backhand that Isner could not return. Isner struck a 120 miles-per-hour second serve at 6/7, but hit a forehand into the net (the American's 14th unforced error of the 63-minute set) to end a short rally.

Isner regrouped and continued to hit his spots on serve, while both players hoped to get a strong racquet on a return. At 4-4, on Isner’s serve, the opportunity came for Anderson when he struck a forehand winner down the line at 30/30. Isner saved the break point when he struck a forehand volley off a big first serve. A few games later, the 6’10” American made sure in the second set tie-break, winning the first five points with aggressive intent from inside the service box. Anderson saved Isner’s first two set points with an ace and an unreturned serve, sowing a seed of doubt in Isner’s mind. But on Isner’s third set point opportunity at 6/5, he fired his 19th ace of the 54-minute second set and roared in delight. 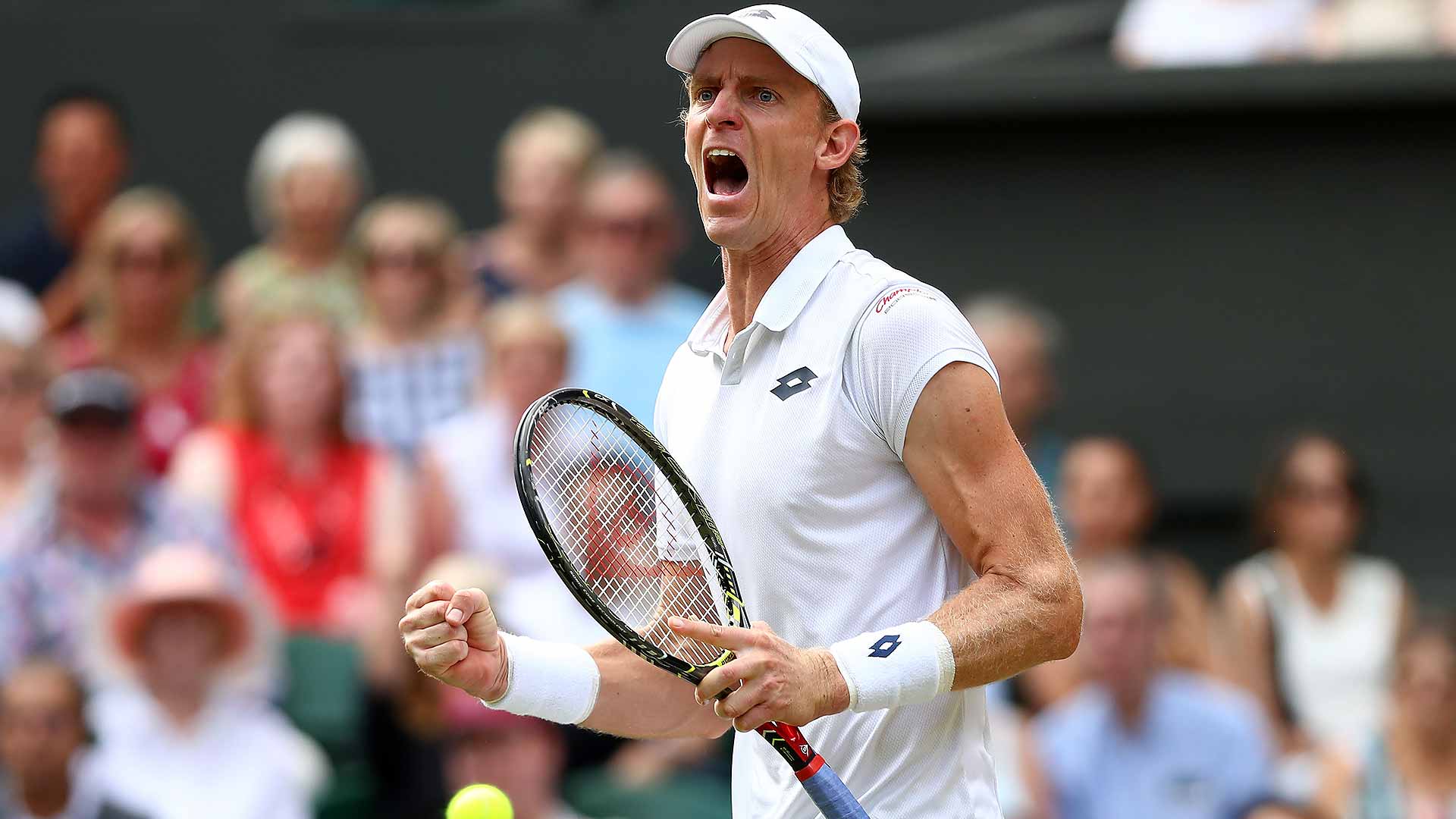 In a match of small margins, Anderson managed to strike a backhand return down the line off a body serve to break Isner for a 5-3 lead in the third set. It was the first time Isner had been broken in 110 consecutive service games at this year’s championship, ending the American’s chances of breaking Pete Sampras’ tournament record of 118 straight service games between the Wimbledon third round in 2000 and the 2001 second round. Isner had come into the match against Anderson as the first man to reach the Wimbledon semi-finals without dropping serve since IBM statisticians began keeping such records in 1992.

Anderson’s lead was short-lived, however, as he whipped a forehand into the net at 30/40 in the next game. Isner, who won eight of 11 points to get back to 5-5, soon received on-court treatment to tape up a blister on his right serving hand. While he struck his third double fault of the match at 5-6, 30/15, the set was destined for another tie-break.

In a dramatic 20 points, Anderson saved two set points at 5/6 (unreturned serve) and 6/7 (with a forehand pass). When he struck a backhand winner pass at 7/7, Anderson held his first set point, but rushed and hit a double fault. A forehand approach winner helped Anderson to his second set point opportunity at 9/8, but Isner fired an unreturned serve. On Isner’s third set point chance at 10/9, Anderson got caught out of position off a deep return from Isner and hooked a forehand response wide. Both players left Centre Court prior to the start of the fourth set.

Anderson broke Isner’s serve for a second time in the fifth game of the fourth set, hitting a forehand that Isner stooped low for and hit wide. Yet, just like in the third set, Isner bounced back immediately for 3-3 after a backhand winner down the line. Two games later, at 4-4, Anderson broke Isner to 30 with a backhand crosscourt winner, then watched three set point chances come and go on his own serve. At the fourth time of asking, Anderson clinched the set when Isner hit a forehand return into the net. 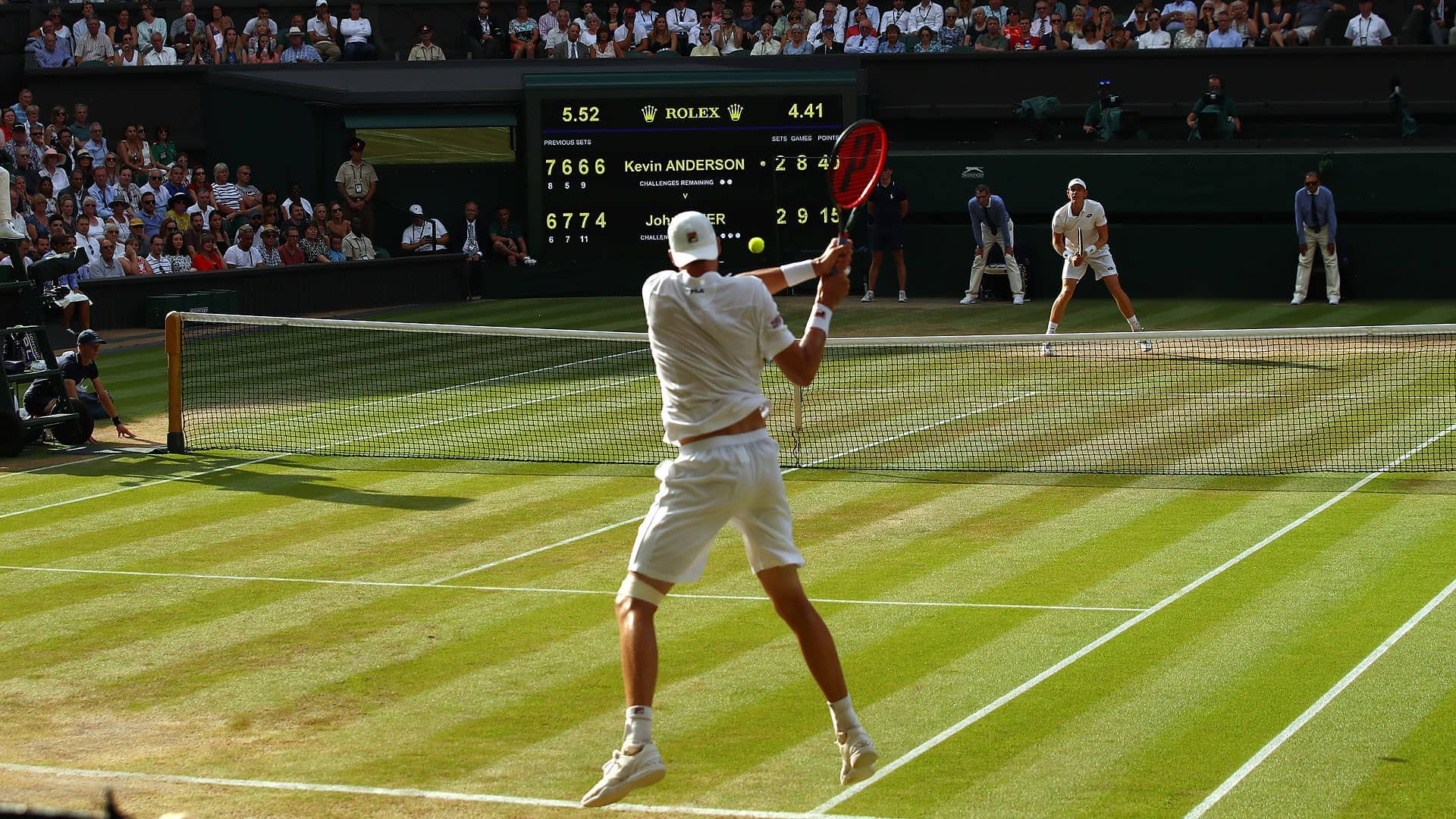 The 33-year-old Isner had been attempting to become the 12th American man to reach the Wimbledon final in the Open Era (since 1968). He had previously beaten Anderson in their past five meetings. On Friday, he struck 129 winners, including 53 aces, in the epic Centre Court-encounter and drops to a 21-12 record in 2018.

Isner’s previous-best Grand Slam championship performance came in 2011, when he reached the US Open quarter-finals (l. to Murray).