Yuichi Sugita was a man on a mission on Saturday at the Antalya Open, downing Adrian Mannarino 6-1, 7-6(4) for his first ATP World Tour title. 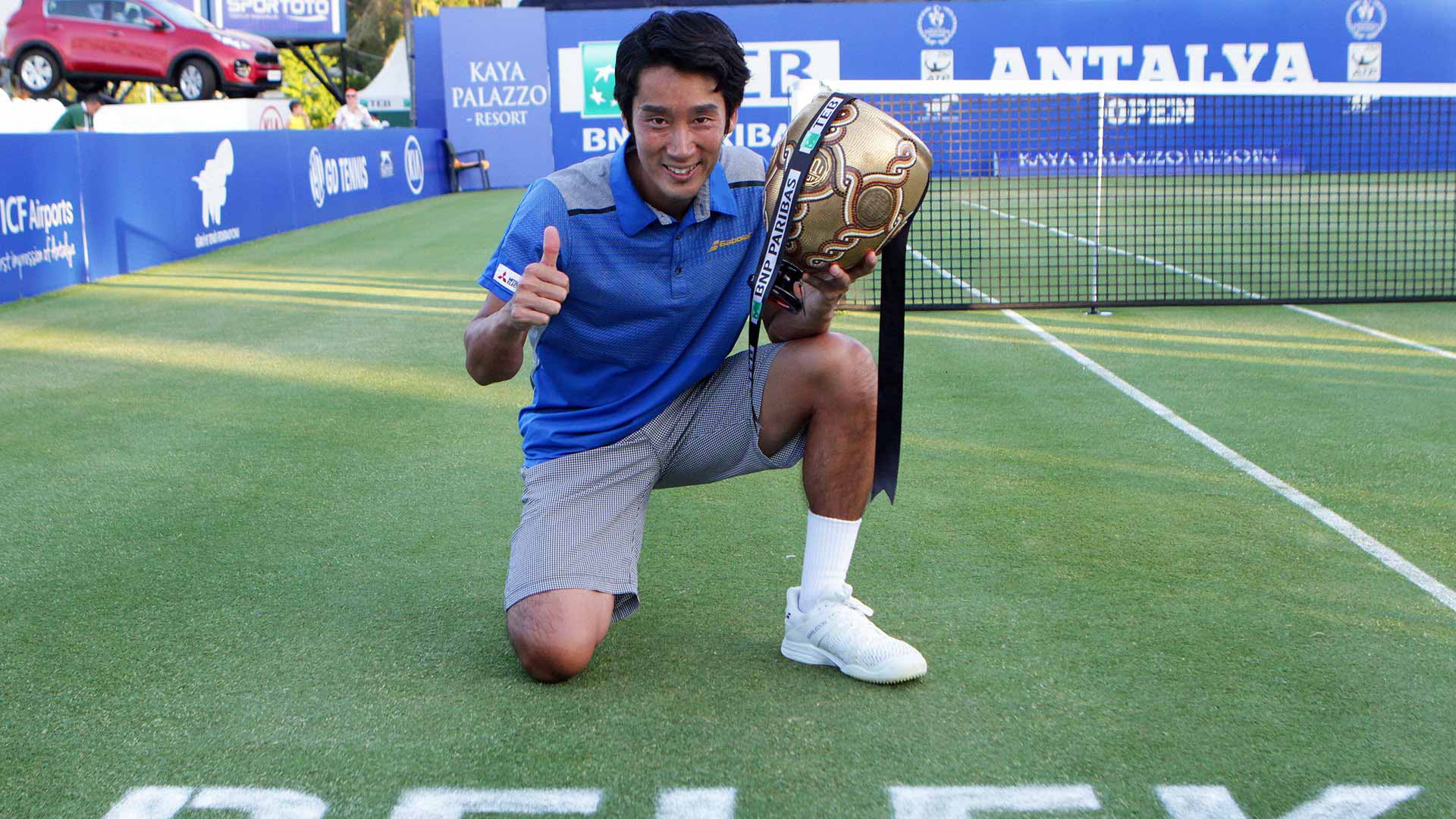 Sugita joined an exclusive club in lifting his maiden trophy, becoming just the third Japanese player to ever win on the circuit, alongside Shuzo Matsuoka and Kei Nishikori. He is also the fourth first-time winner on the ATP World Tour this year, needing one hour and 29 minutes to fight past Mannarino on a searing hot Saturday afternoon in Antalya.

Just three weeks removed from notching his ninth Challenger title at the Aegon Surbiton Trophy, Sugita becomes the first player to win on grass on both the ATP World Tour and ATP Challenger Tour in the same season. The Japanese has capped a dream run to the Top 50 of the Emirates ATP Rankings, having surged nearly 100 spots from No. 134 in February.

"I'm really happy to be the first champion in Antalya," Sugita said during the trophy presentation. "This is the most emotional moment of my career. I've won many Futures and Challenger titles, but never at a big tournament like this. It's just amazing. I can't believe it."

Sugita improved his FedEx ATP Head2Head mark against Mannarino to 2-1, having previously prevailed at the 2012 Nottingham Challenger, before falling to the Frenchman in the final round of qualifying at this year's Monte-Carlo Rolex Masters. He takes home €78,270 in prize money as well as 250 Emirates ATP Rankings points.

Sending Mannarino into the corners with his swift, agile movement and accurate forehand, Sugita surged to an early lead. An overhead smash secured the break in the second game and he would streak to a one-set advantage with a backhand winner after just 29 minutes.

The lead vacillated between the two competitors in the second set, with Mannarino breaking twice in a row, before eventually relinquishing the lead and later the match in the ensuing tie-break. Sugita would emerge victorious after just under 90 minutes.

"Yuichi was just the better player today, he deserved to win," said Mannarino. "It is still a great week for me. I didn’t expect to be in the final at the beginning of the week and I had some very tough matches here. Congratulations also to the organizers for a great first edition of this event."

You May Also Like: Qureshi/Lindstedt Clinch Antalya Doubles Title

Appearing in his third final, Mannarino was also bidding for his maiden ATP World Tour title. He previously finished runner-up in Auckland and Bogota in 2015. The Frenchman takes home €41,225 in prize money and 150 Emirates ATP Rankings points for his efforts.

Mannarino and Sugita will next head to the All England Club for Wimbledon, where they could meet again in the second round. Mannarino opens against last week's Queen's Club winner Feliciano Lopez, while Sugita faces home hope Brydan Klein.