The ATP has today unveiled a new brand identity and plans for an ambitious global marketing campaign – built around its "Love It All" message, which highlights the unparalleled excitement and drama delivered by every one of the ATP’s 63 tournaments during the season.

Launched during the season-ending Nitto ATP Finals in London, the ambitious plans are designed to transform the way that men’s tennis is promoted across the world. The re-brand includes a new logo, visually-distinctive assets that convey the energy and movement that epitomise world-class tennis, and the shortening of ATP World Tour to simply ATP Tour.

The new brand also reflects the exciting changes and innovation taking place across men’s professional tennis. These include the ATP’s testing of new rules and formats at last week’s Next Gen ATP Finals in Milan – alongside the announcement of the new ATP World Team Cup competition from 2020 and its pioneering broadcast partnership with Amazon Prime announced in 2017.

Chris Kermode, ATP Executive Chairman & President, said: “These ambitious and innovative initiatives will enable us to better engage and inspire sports fans around the world – from hardcore tennis followers to the more casual fans, who might currently only follow our sport during the Nitto ATP Finals or Grand Slam tournaments. This is about showcasing the fantastic entertainment and high-intensity action that is on offer all year round – raising awareness, driving engagement across digital and TV, and packing out stadiums wherever we go.

“We’re taking a bold approach in everything we do at the ATP, from our pioneering broadcast partnership with Amazon Prime to the innovations we’ve been testing out at the Next Gen ATP Finals in Milan. It’s an exciting time for the sport – with a mix of unbelievable legends still at the top of their game and a next generation of stars emerging – so this is a great time to be engaging new, younger fans around the world.” 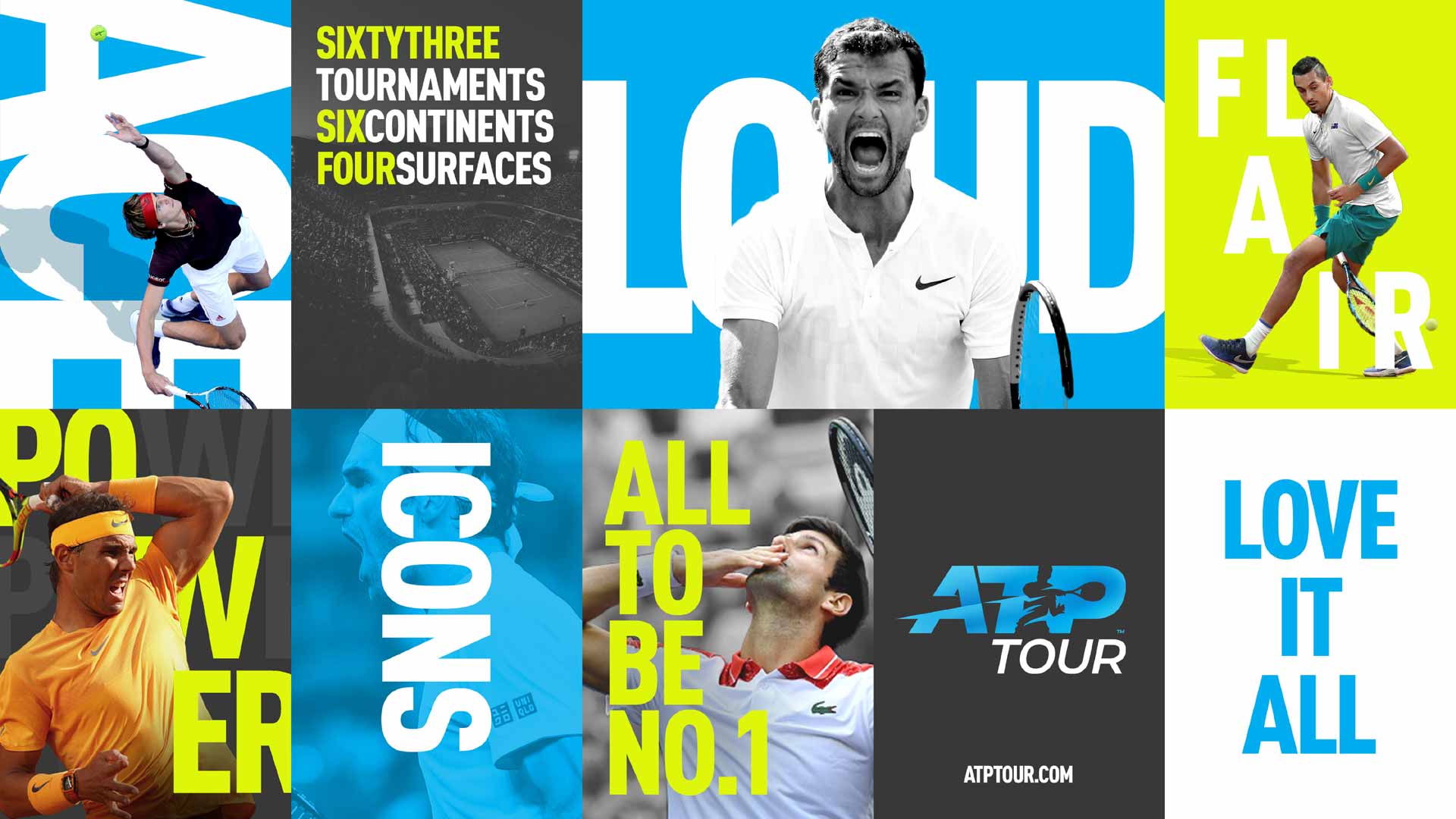 The new brand toolkit will be shared with all ATP tournaments, players and partners across the globe so that they can create their own bespoke marketing campaigns - delivering vibrant and exciting content that is consistent with the ATP’s new style and approach. The work includes distinctive new identities for the Nitto ATP Finals, Next Gen ATP Finals, ATP 1000s, ATP 500s and ATP 250 tournaments, as well as over 100 unique player profile brands – from icons like Roger Federer, Rafael Nadal and Novak Djokovic to the next generation of stars such as Alexander Zverev, Stefanos Tsitsipas and Denis Shapovalov.

The marketing activity will run across all digital channels, as well as TV advertising delivered through specific ATP tournaments. The campaign will emphasise the “Love It All” message by highlighting the 63 tournaments across 31 countries during the 2019 season – from Brisbane in January to the season-defining Nitto ATP Finals in London.

George Ciz, SVP, Marketing and Business Development at ATP, said: “We wanted to create a striking new look and brand for the Tour which can easily be tailored for the marketing campaigns delivered by each ATP tournament – something simple, impactful and flexible enough for the needs of every player and competition. We also needed to ensure that our creative is really authentic and that it resonates with our target audiences, especially younger fans.

The result is something fun and raw which really conveys the energy and movement we believe makes tennis the most exciting sport in the world. These changes are all about putting the game at the heart of our content – letting the unbelievable action speak for itself.”

ATP has worked with London-based creative agency MATTA to deliver this comprehensive re-brand. Following a competitive pitch process, MATTA was selected to support the ATP in creating the new brand and in helping to promote elite men’s professional tennis to an ever-broader audience.

Matt Hunt, MATTA’s Strategy and Brand Director, commented: “For casual tennis fans there is so much more to explore beyond the Slams, from dramatising the player narratives that emerge, to the fact that fan favourites are followed as much for their personal qualities as their nationality, which is all combined with the unbelievable athleticism and skill they display week in week out. We needed to create a fresh and flexible creative vehicle to convey this breadth and encourage casual fans to love it all.”

“The research we conducted among lighter tennis fans highlighted the need to continue to improve the spontaneous association of the ATP with the sport, so integrating a dynamic and powerful tennis player into the typography was the perfect short cut to achieve this.”

The new ATP brand and marketing campaign will go live on 1 January 2019.