Novak Djokovic climbed to World No. 1 in the FedEx ATP Rankings for the first time after clinching his maiden Wimbledon title in 2011.

The Serbian earned five year-end World No. 1 finishes during the 2010s

In the latest profile on the 26 players to rise to No. 1 in the FedEx ATP Rankings, ATPTour.com looks back on the career of Novak Djokovic. View Series.

As World No. 1
After opening the 2011 ATP Tour season with seven trophies and 41 consecutive victories, Djokovic rose to World No. 1 in the FedEx ATP Rankings on 4 July 2011 after beating Rafael Nadal to claim his first Wimbledon crown. “They don't give you a lot of chances to become number one. So I guess you need to lose only one match in seven months to get there,” said Djokovic. The Serbian owns five year-end World No. 1 finishes and most recently achieved the feat in 2018, when he won 35 of his final 39 matches of the year to become the first player ranked outside the Top 20 to finish the same season at No. 1 in the FedEx ATP Rankings.

Grand Slam Highlights
Djokovic has captured 17 major championship trophies, highlighted by a record eight Australian Open title runs. The elastic 32-year-old owns a 75-8 record at Melbourne Park, which includes a combined 16-0 record in semi-final and final encounters. Three years after his maiden Grand Slam triumph Down Under in 2008, Djokovic claimed three major championships in 2011. Alongside his second Melbourne trophy, Djokovic clinched his first trophies at Wimbledon and the US Open. Djokovic owns five Wimbledon titles and three US Open crowns. At Roland Garros in 2016, the Serbian defeated Andy Murray to complete the ‘Nole Slam’, joining Don Budge (1938) and Rod Laver (1962 and 1969) as only the third man in history to hold all four Grand Slam titles at the same time. "It's a thrilling moment," said Djokovic. "One of the most beautiful I have had in my career... It's incredibly flattering to know that Rod Laver is the last one that managed to do that. There are not many words that can describe it. It's one of the ultimate challenges that you have as a tennis player. I'm very proud and very thrilled.” 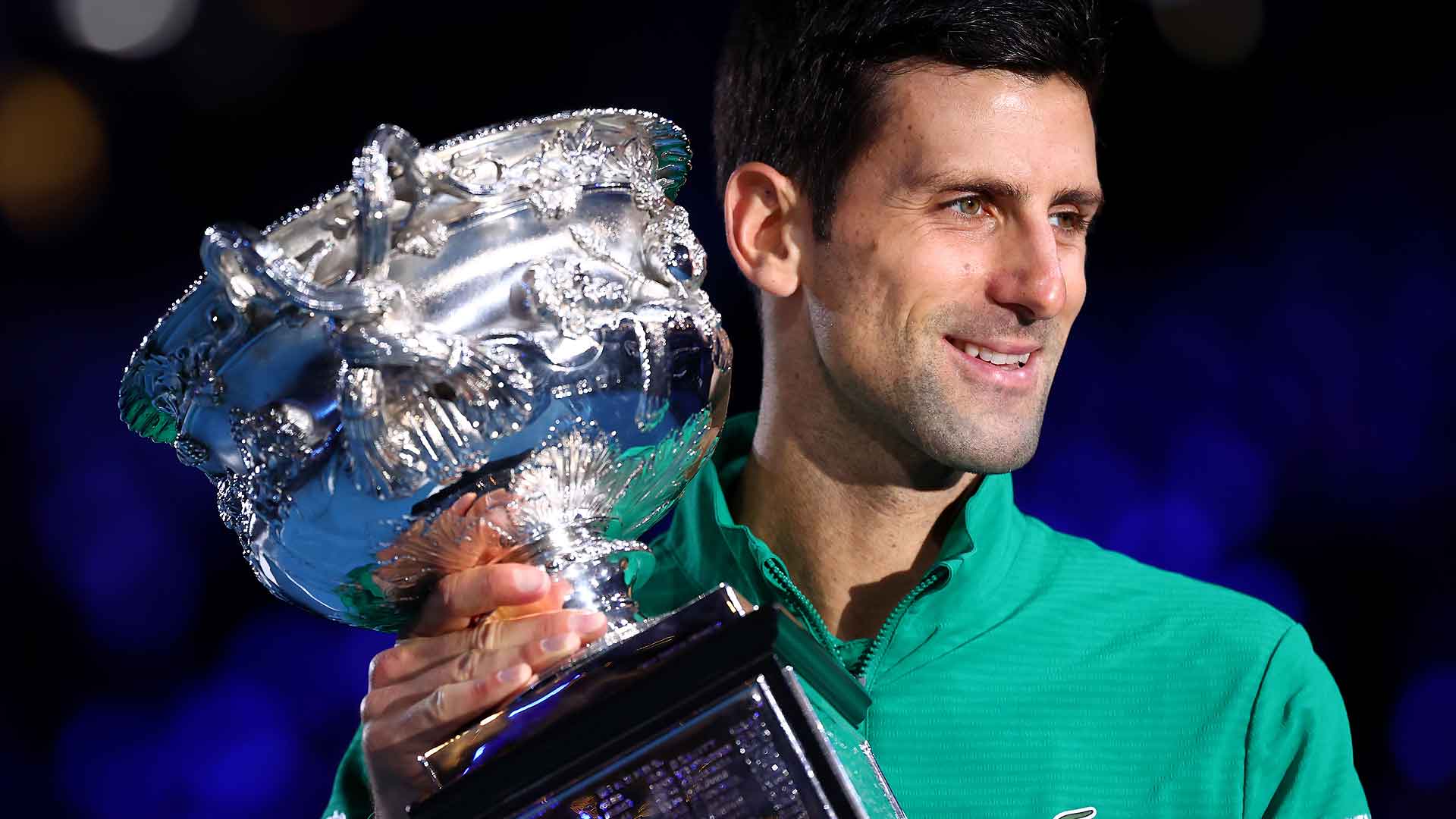 Nitto ATP Finals Highlights
Djokovic is the only man in Nitto ATP Finals history to win the tournament on four consecutive occasions (2012-2015). The 79-time tour-level titlist, who also claimed the trophy in 2008, owns a 36-14 record at the elite eight-man event. Djokovic has made 12 appearances at the tournament, which includes 10 consecutive qualifications from 2007 to 2016. “The last four years I managed to win the [Nitto ATP] Finals, where the best players in the world are playing,” said Djokovic in 2015. “For some reason or another, I've been playing some of my best tennis after the US Open, in Asia and also indoors, both Paris and London.”

ATP Masters 1000 Highlights
With 36 trophies at Masters 1000 events, Djokovic is the most successful player in Masters 1000 history. The Belgrade-born star claimed his first Masters 1000 crown in Miami in 2007 and beat Top 3 stars Andy Roddick, Nadal and Roger Federer later that year in consecutive matches to lift his first of four Coupe Rogers trophies. Djokovic has historically started and finished the year strong at the level. He shares title records in Indian Wells (5 w/Federer) and Miami (6 w/Agassi) and leads the way in Shanghai (4) and Paris (5). At the 2018 Western & Southern Open in Cincinnati, Djokovic became the first player in Masters 1000 history to win all nine elite tournaments and complete the career Golden Masters. "Making history in the sport that I love with all my heart is always very meaningful to me... It was a big one,” said Djokovic. “In order to win it, I had to overcome that big hurdle and big challenge [against Federer]. I managed to do so and it was a great, great day. Big support from the crowd and an amazing occasion to be part of." Two years later, at the same event, Djokovic completed his second career Golden Masters with victory against Milos Raonic in the championship match. The Serbian made further history at the level last month, capturing his fifth Rome trophy to break a tie with 35-time Masters 1000 titlist Nadal. The 33-year-old also owns three Madrid titles and two Monte Carlo crowns.

Biggest Rivalries
As a member of the ‘Big Three’, Djokovic has contested two major rivalries throughout his career on the ATP Tour.

With 55 meetings, Djokovic and Nadal have established the longest ATP Head2Head rivalry in the Open Era (Djokovic leads 29-26). The two men produced the standout rivalry of the past decade, when they contested championship matches at each of the four Grand Slam events (tied at 4-4), the Nitto ATP Finals and five Masters 1000 tournaments. Djokovic also defeated the Spaniard in a must-win contest at the inaugural ATP Cup in Australia this year, en route to lifting the trophy for Team Serbia. Across the past 12 ATP Tour seasons, one of Nadal and Djokovic has finished as year-end World No. 1 in the FedEx ATP Rankings on 10 occasions.

Surpassed only by his rivalry with Nadal, Djokovic has met Federer on 50 occasions during their ATP Head2Head rivalry (Djokovic leads 27-23). The pair has met in 19 championship matches with Djokovic leading 13-6, including four wins from five Grand Slam finals. In one of the greatest Wimbledon finals of all-time in 2019, Djokovic saved two championship points to overcome Federer in the first final to be decided by a 12-12 fifth-set tie-break. With both players aiming to end their careers as the leader in the Grand Slam titles leader board, Djokovic’s victory brought him to within four major championships of the 20-time Grand Slam champion’s mark. Since 2003, Federer and Djokovic have captured a combined 14 Australian Open titles, 13 Wimbledon trophies and 11 Nitto ATP Finals crowns.

“[My rivalry] with Roger and Rafa… is one of the motivations for me to still keep going at this age,” said Djokovic. “The three of us have inspired each other throughout our rivalries and careers to be better, to understand how we can overcome obstacles in the matchups.

“I am more grateful today to be in the same era with these two guys than I was probably 10, 15 years ago. I think that definitely rivalries with them made me very, very strong, very resilient, and also very motivated that I am still today.”

Legacy
One of the sport’s greatest players with the best return of serve in history. Djokovic has applied relentless pressure on his opponents throughout his career with pinpoint returns and remarkable elasticity and endurance levels. The eight-time Australian Open champion has claimed 81 tour-level trophies, including 17 Grand Slam championships and five year-end World No. 1 finishes. With a great mix of great offensive and defensive skill, Djokovic has proven himself to be one of the most complete players in history. Djokovic is the only man to have completed the career Golden Masters and one of only three men to have held each of the four Grand Slam trophies at the same time. Djokovic holds an 84.4 per cent record on hard courts, the greatest winning percentage on the surface in the history of the sport. Djokovic forced his way into the 'Big Three' era alongside Federer and Nadal with an incredibly consistent game style, bringing tennis to a new audience and lifting the profile of the sport to new heights.

Memorable Moment
In the longest men’s Grand Slam final on record, Djokovic outlasted Rafael Nadal 5-7, 6-4, 6-2, 6-7(5), 7-5 after five hours and 53 minutes to claim his third Australian Open trophy. Djokovic entered the contest on a six-match winning streak against the Spaniard, but was pushed to the limit in one of the most physical encounters in the history of the sport. Late in the fifth set, after recovering from a 2-4 deficit, Djokovic collapsed to the court after a brutal 31-shot rally. But, despite the fatigue, the Serbian earned a crucial break at 5-5 before ripping a forehand winner to take the title at 1:37 a.m. local time. Djokovic tore off his shirt in celebration and roared in delight as he made his way towards his player box. “The fact that we played almost six hours is incredible,” said Djokovic. “I'm very proud just to be part of this history, part of the elite players that have won this tournament several times. I was very flattered to be playing in front of Rod Laver, in front of the all-time greats and in front of 15,000 people that stayed until 1:30 a.m." 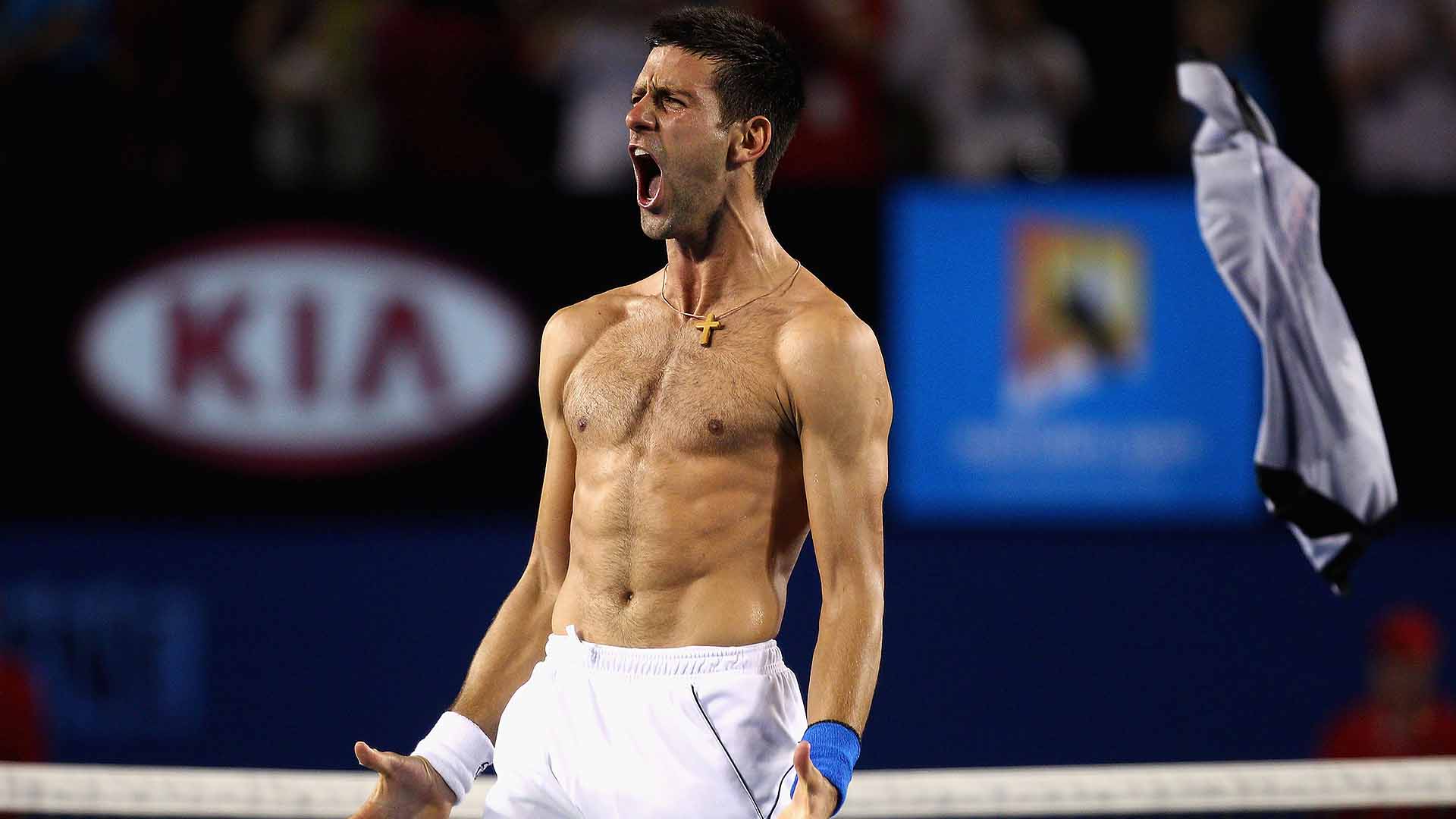 Federer on Djokovic
“I think it started as a semi-final rivalry, because me and Rafa were ranked one and two and two and one for a long time, and he was always three or four. Then it changed. He became World No. 1 and… we started to play each other more often in finals as well and in the bigger matches like the US Open and Wimbledon… I think it's really become a very nice rivalry. I don't think we have to adjust our games very much. We can just play our game, and then the better man wins.”

Nadal on Djokovic
“I played against a player who did everything perfect. I know nobody playing tennis like this ever. Since I know this sport, I never saw somebody playing at this level,” said Nadal after falling to Djokovic in the 2016 Qatar ExxonMobil Open final.

Djokovic On Djokovic
”My upbringing was in Serbia during several wars during the '90s, difficult time, an embargo in our country where we had to wait in line for bread, milk, water, some basic things in life. These kind of things make you stronger and hungrier for success I think in whatever you choose to do.

“That probably has been my foundation, the very fact that I came from literally nothing and difficult life circumstances together with my family and with my people. Going back to that, reminding myself where I came from always inspires me [and] motivates me to push even harder. That's probably one of the reasons why I managed to find that extra gear, the mental strength to overcome challenges when they present themselves.”

Broadcaster/Journalist Graeme Agars
Is Novak Djokovic the best counter-puncher the game has ever seen? His ever-growing trophy cabinet offers some very strong evidence that he is. With more than 80 tour-level titles already locked away as he approaches 300 weeks atop the FedEx ATP Rankings, Djokovic's impressive resume supports that claim.

The World No. 1 certainly has one of the best service returns the game has ever seen and his backhand down the line, his favourite shot, is a joy to watch as he frustrates his opponents with its power and placement.

In addition to all his shot-making prowess, the Serbian is also one of the fittest and fastest players on Tour and is very hard to pass. Some of the acrobatic positions Djokovic produces on court make it look at times as though he is made of rubber.

Early in his career he seemed at times to completely run out of energy in some of his longer matches, something that rarely occurs these days after he switched to a gluten-free regimen and became very conscious of his health and diet. It has paid dividends.

Off the court, he is equally well decorated. Among his major awards are the Laureus World Sportsman of the Year (2012, ‘15-16 and ‘19), Eurosport Athlete of the Year (2015), Order of the Republika Srpska (2013) and the Arthur Ashe Humanitarian Award (2012). The Novak Djokovic Foundation, founded in 2007, has been highly successful in helping disadvantaged communities gain access to pre-school education.