Roger Federer made his debut at No. 803 in the Emirates ATP Rankings on 22 September 1997.

ATPWorldTour.com looks back on Federer's first appearance in the Emirates ATP Rankings

The hunt for an elusive Emirates ATP Rankings point — a goal shared by every aspiring professional tennis player — can be tough and costly. But once attained, the location and year of the achievement will be indelibly marked. Twenty years ago today, on Monday, 22 September 1997, page nine of the weekly rankings list contained this entry: 803T Federer, Roger.

The entry didn't attract much attention back then, nor did that of another future World No. 1, '808 Hewitt, Lleyton', just a few lines down. But Federer had taken his first step on the ladder following a four-week series of Swiss clay-court satellite tournaments in Bossonnens — culminating in eight victories and two semi-final runs (l. to Daniele Balducci and Agustin Garizzio, respectively) — to earn 12 points. Aged 16 years and 55 days, Federer could also look a little further up the rankings at No. 756, Juan Carlos Ferrero, another future leader of the sport.

“The ATP rankings is where it all starts for every player," Federer said. "It's about getting your foot on the ladder and seeing your name on the computer rankings for the first time. I'll never forget that moment and the excitement I felt after that Satellite. It was the start of a long journey to the top for me. I think that's the great thing about our sport; the rankings provide a really accurate barometer of where you stand compared to your peers. The computer doesn't lie. It's amazing to think that 20 years later I'm still in the game  and still with a chance to get to year-end No.1 in 2017. I never imagined having such longevity." 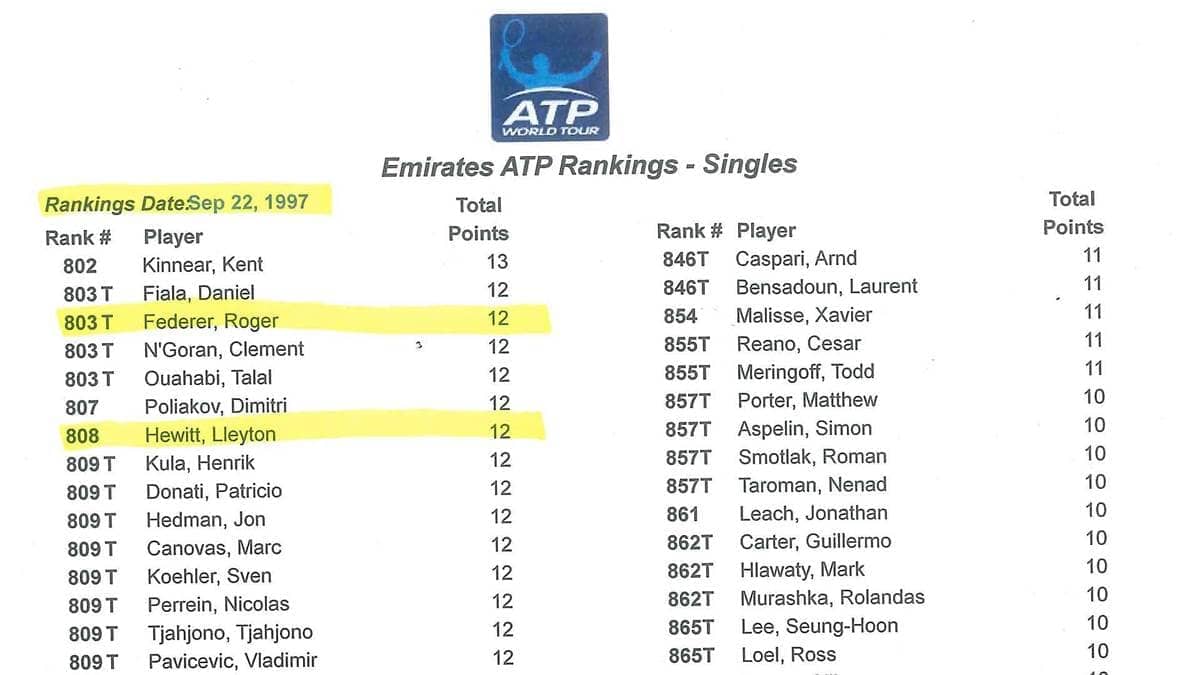 Over the course of the past 20 years in the Emirates ATP Rankings, Federer has accrued a staggering 121,092 points in a glittering career that to-date includes 93 trophies and a 1119-249 match record. Now aged 36, and with two months left of the 2017 season, the Swiss superstar’s focus is attempting to make up ground on Rafael Nadal and add to his record 302 weeks at No. 1.

In September 1997, fellow Swiss Martina Hingis was at the peak of her considerable powers. Federer, 312 days younger, was already technically and tactically stronger than some of his compatriots, Yves Allegro, Michel Kratochvil, Christian Dillschneider and Severin Luthi, who, of a similar age, also competed on the satellite circuit. From the start of 1996, through his exploits at Bossonnens and to the end of 1997, Federer rose from No. 88 nationally into the Swiss Top 10.

YEAR-BY-YEAR RANKINGS RISE TO NO. 1

Danny Schnyder, brother of former WTA pro Patty, who Federer jokes “beat him as a junior as often as Rafael Nadal and Novak Djokovic”, believes that his childhood friend's route to becoming a top professional player opened up when Federer started to develop his on-court temperament.

“He always had a lot of potential, but what he needed to do was convert his anger, his mental attitude — that he sometimes expressed or even felt as a junior — into a strength,” Schnyder told ATPWorldTour.com. “That’s what made the difference. Talent was never an issue, but a concern was only ever how he controlled his temperament. In controlling that, he improved fast. He converted his mental game into such a weapon, to become such a psychologically stable player and able to dominate players in the head.”

Between first working with Peter Carter (from 1993), and then when Peter Lundgren joined the Swiss Tennis Federation in 1997, Federer’s biggest decision — with the backing of his parents — had been to move to train at the Swiss National Tennis Centre in Ecublens in September 1995. While the home-sick Federer never liked to train or practise, favouring matches, by the time he relocated to Biel two years later, when his father, Robert, was mulling over an executive position in Australia, the 16 year old finished nine years of schooling with his sights firmly set on a professional tennis career.

The family never moved to Australia. Federer soared to junior World No. 1 within a year and he also grew in maturity, helped by the fact that he shared a two-bedroom apartment in Biel with 18-year-old Allegro, where the pair watched television and played computer games (sometimes until 2 a.m.), between training with Michael Lammer and Marco Chiudinelli. His ascent up the Emirates ATP Rankings from tied-No. 803 on 22 September 1997 and into the Top 50 — at No. 48 on 6 March 2000 — was fast.