It has been 15 years since their first ATP Tour final

It was one of those matches that marked a turning point in the game. Exactly 15 years ago, on 3 April 2005, Roger Federer and Rafael Nadal clashed for the first time in an ATP Tour final. On the courts of the Crandon Park Tennis Center in Miami, one cup was at stake between two figures destined to become icons of modern sport.

It was just the second match in a flourishing rivalry. One season earlier, Nadal had upset the Swiss in the third round of the same tournament. A few things had changed since then. Although Federer was still the undisputed No. 1 in the FedEx ATP Rankings and Nadal was outside of the Top 30, the distance between the two of them was considerably less.

In an epic final, Federer survived Nadal’s onslaught 2-6, 6-7(4), 7-6(5), 6-3, 6-1, after three hours and 43 minutes of hard work. Several things became clear that day. Firstly, their styles of play meshed perfectly. Secondly, on his debut in an ATP Masters 1000 final, Nadal had no fear whatsoever of performing on the big stage. Thirdly, that very few players would be capable of making that version of Federer suffer the way he did. All at 18 years of age.

Federer, at the time synonymous with victory, could smell defeat just two points away from him. He left the court with more than a title; he also took with him the certainty that, despite his adolescence, he had a huge rival on the other side of the net. “I wasn’t surprised because I know how good he is,” said Federer. “In every match I play I’m the hot favourite. When I lose sets, it seems crazy and today I saw the danger Nadal represents.” 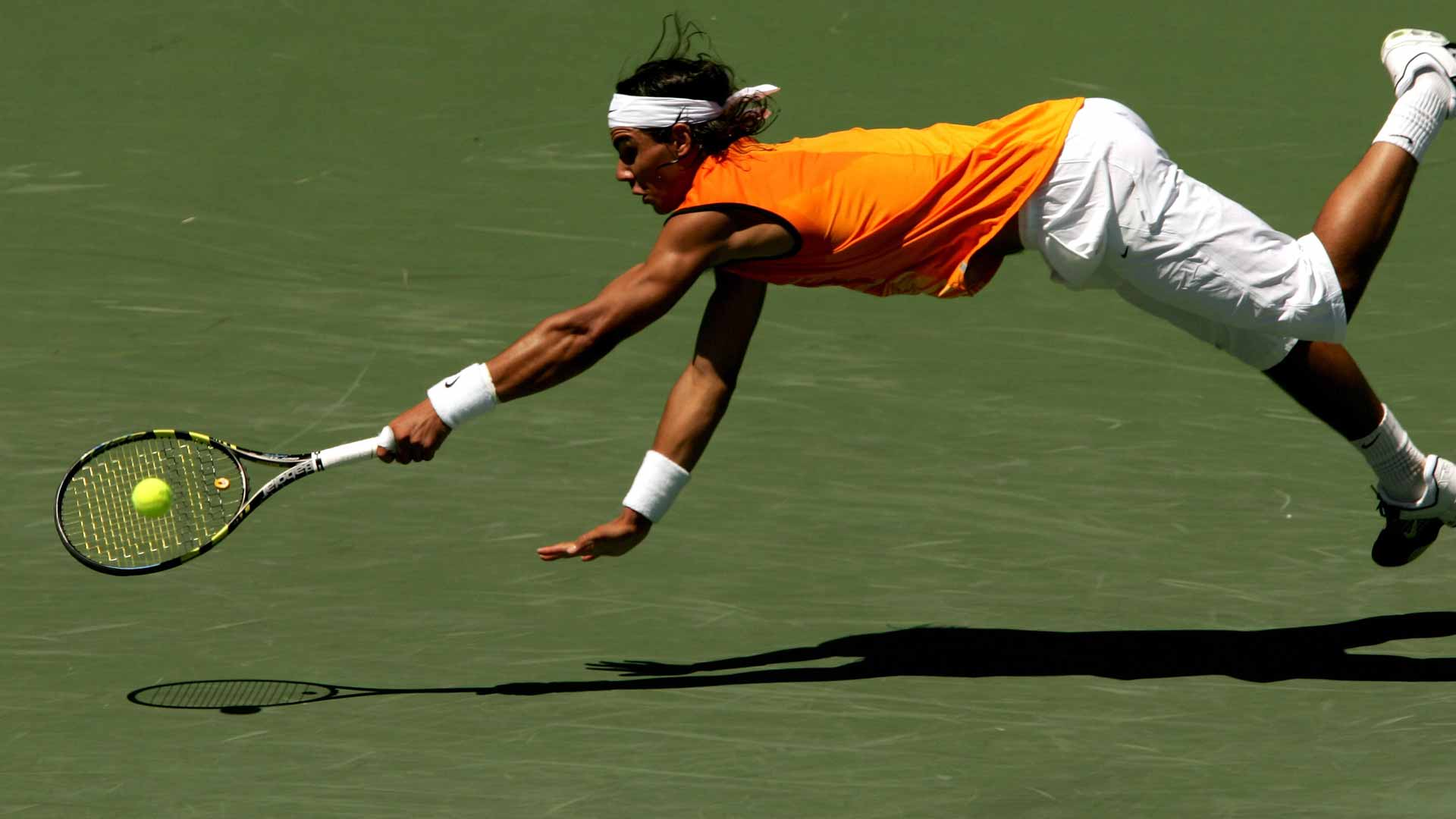 With white, knee-length shorts, a sleeveless orange t-shirt and limitless energy, Nadal had delivered another reality check to the eyes of the world. While one year earlier he had seen off Federer in the early stages of the tournament, making history with every step, now he had stared him down with the title at stake. He had pushed the No. 1 to the brink, with a two-set lead and 4-1 up in the third. Everyone took notice.

“I’m happy with my game but not with the final result,” explained an ambitious Nadal. “I lost a little energy in the fourth and fifth set. In the third, I was feeling good. I felt I was playing well and had the confidence to win the match. But he played well in key moments. I think my game was good from start to finish. In the fifth set, once I lost my serve, I lost the match.

“When you’re playing the best player in the world and you reach that point, you feel like you’re mentally ready. But it’s hard psychologically.”

The reality was more than clear. Federer had won his past 21 matches and had only suffered one defeat in the past 48 encounters. But that afternoon, suddenly Nadal had pushed him to the limit. So much so that an old habit that the Swiss had managed to overcome with time, came back to bite him; smashing his racquet against the floor.

“It is surprising to see Federer throw his racquet, but it makes you think that you’re closer to victory,” said Federer. “I could see his frustration when he did that. I was very disappointed, I let slip one opportunity after another,” concluded Federer. “He made me feel as if I were going uphill all the time. That’s why I threw my racquet so hard. It did me good and woke me up in a way.”

Although the Swiss was in deep trouble, despite the fact that he was haemorrhaging errors, Nadal witnessed his survival instincts at close quarters, the virtue that separates the best from the very good. “Federer is a player that makes mistakes, that’s not his strength”, said Nadal. “His strength resides in being able to surprise you, and in not making mistakes in the most important moments.”

Teetering on the precipice, Federer found a way to keep breathing.

“I was very worried, above all in the first set,” said Federer. “I don’t often lose 6-2 and that shows that I was struggling. But I think it has a lot to do with his game. He’s left-handed and I have to get used to that. And I couldn’t do it! Maybe he was very aggressive from the start. By the time I managed to understand his game, I was already a set and a break down. Then my reaction was good. I missed a lot of chances, but surviving all that was incredible.”

For an athlete used to burying his opponents, fighting back must have been an enormous relief. Federer, at that time, had only twice comeback from two-sets-to-love down in his career.

“In the end, I felt like the happiest man in the world,” said Federer. “I’m very happy about this comeback, because I had almost never done that in my life. It’s a great moment in my career, especially doing it in a final against a player of that quality.”

After almost four hours of high-level tennis, Federer was able to analyse Nadal’s game. “His shots bounce very high,” said the then 24-year-old Federer. “He doesn’t play deep, but short, so the ball goes really high. When you realise that you should attack it, it’s already too late. In that situation, your shots are going to be high risk. We don’t have many great left-handers right now, so it’s good to have a new one.

“He’s an extraordinary athlete. He moves in a way that’s completely different to most players. He’s fast and, as he’s left-handed, it changes a lot of things. His forehand is huge. Even when running he can hit it with spin. He hits his backhand very close to his body, but, somehow, he manages to hit it hard, even under pressure. That’s what he does well. He’s a particularly good defensive player, he doesn’t just have a good forehand. We’ll see a lot of him in the future. For me it was a huge match, because I know what a great player Rafa will be one day.”

Hearing the praise, the 18-year-old Nadal, who had subsequently gone on to capture a record 35 Masters 1000 trophies, admitted, “Whenever I play well and whenever I play matches of this type I have fun. But once you lose the last point the fun is over. “It’s my first Masters [1000] series final and I’m quite surprised. But I’m playing well, and I hope it’s not my last.”

That day in Miami marked the start of something very special. The first final was pure sporting spectacle. Every fan wanted more. Luckily, all the tennis world had to do was wait...