Lleyton Hewitt: The Youngest World No. 1

In the latest profile on the 26 players to rise to No. 1 in the FedEx ATP Rankings, ATPTour.com looks back on the career of Lleyton Hewitt. View Full List.

At World No. 1
At the end of a stellar 2001 ATP Tour season, Hewitt claimed his maiden Nitto ATP Finals trophy in Sydney — with an unbeaten 5-0 record — to overtake Gustavo Kuerten at the top of the FedEx ATP Rankings on 19 November. The 2001 US Open winner became the youngest World No. 1 in history, narrowly beating Marat Safin’s record set in the previous year. “Growing up, the three things I wanted to do were win a Grand Slam, the Davis Cup and get to World No. 1," said Hewitt. "In the end, the World No. 1 was the last of the three.” Hewitt, nicknamed 'Rusty', held the World No. 1 ranking for a total of 80 weeks, including 75 consecutive weeks between November 2001 and April 2003.

Grand Slam Highlights
In his third appearance at the US Open in 2001, Hewitt outlasted Andy Roddick in five sets and cruised past former World No. 1 Yevgeny Kafelnikov to reach his maiden Grand Slam final. The World No. 4 faced Pete Sampras for the title, in a repeat of their 2000 semi-final won by Sampras. On this occasion, Hewitt outclassed the four-time champion from the back of the court to claim his first Grand Slam crown. “It's unbelievable,” said Hewitt. “I've dreamed of this moment and being out here and playing in a Grand Slam final. It hasn't sunk in yet." The 2000 US Open doubles champion (w/Mirnyi) also reached the singles final in New York in 2004, losing to Roger Federer in straight sets. As World No. 1, the 5’10” right-hander added a second major championship to his collection at Wimbledon in 2002. Hewitt survived a five-set epic against Sjeng Schalken in the quarter-finals at SW19, before back-to-back straight-sets victories against home favourite Tim Henman and David Nalbandian. Aiming to become the first home player to lift the Australian Open title in 29 years, Hewitt finished as runner-up at his home Grand Slam in 2005. The 23-year-old claimed five set wins against Rafael Nadal and Nalbandian to reach the semi-finals, where he defeated Roddick in four sets. Hewitt fell short of the trophy in front of a passionate Aussie crowd at Rod Laver Arena, losing in four sets to Marat Safin. Hewitt achieved his best results at Roland Garros in 2001 and 2004, losing to Juan Carlos Ferrero and eventual champion Gaston Gaudio, respectively. 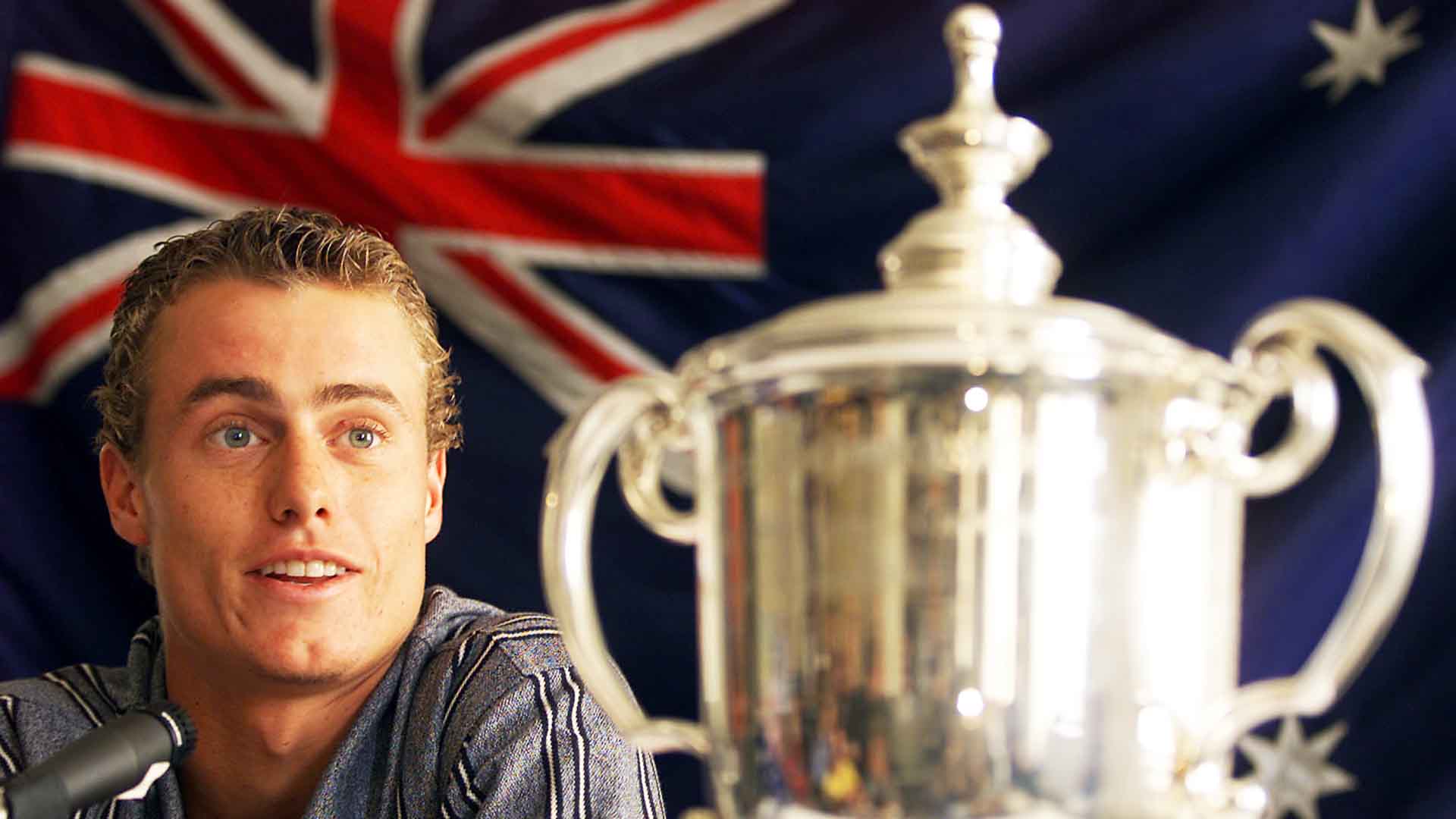 Nitto ATP Finals Highlights
Hewitt made four appearances at the Nitto ATP Finals from 2000 to 2004, winning the title on two occasions. After finishing his tournament debut in Lisbon with a 1-2 record, Hewitt returned the following year in Sydney to take the trophy and become World No. 1 for the first time. The Adelaide-born star claimed his second straight title at the event in 2002, beating Federer and Ferrero from the semi-final stage to finish as year-end No. 1 in the FedEx ATP Rankings for a second time. Hewitt reached his third final at the elite eight-man event in Houston in 2004, losing in straight sets to Federer in a repeat of their US Open final.

ATP Masters 1000 Highlights
Hewitt’s best results at ATP Masters 1000 level came at the BNP Paribas Open in Indian Wells. The hard-working Australian reached three championship matches in the desert, winning back-to-back trophies in 2002 and 2003. Hewitt collected his maiden Masters 1000 crown at the tournament in 2002, beating six players ranked No. 31 or higher — including Sampras and Henman — to take the title. In the following year, the 22-year-old rallied from a set down on two occasions before a dominant 6-1, 6-1 win against Kuerten in the championship match. Hewitt, who also finished as runner up to Federer at the event in 2005, ended his career with a 30-13 record in Indian Wells. The two-time year-end World No. 1 also reached Masters 1000 finals in Stuttgart, Cincinnati and Paris between 2000 and 2004.

Biggest Rivalries
From 1999 to 2014, Hewitt contested 27 ATP Head2Head clashes against Federer. The Aussie enjoyed consistent success in the early stages of his rivalry with Federer, winning seven of the pair’s first nine meetings. Their ninth meeting was perhaps their most memorable, with Hewitt rallying from two sets down to beat the Swiss during Australia's 2003 Davis Cup semi-final triumph against Switzerland at Rod Laver Arena. But Federer soon turned the tables on his rival, winning 15 consecutive matches against Hewitt between the 2004 and 2010 editions of the Australian Open. In his final three matches against the Swiss, Hewitt earned two notable victories. The 30-time tour-level titlist stunned Federer in both the 2010 Halle and 2014 Brisbane finals to end his ATP Head2Head series with a 2-3 record in finals against the 20-time Grand Slam champion.

Legacy
With an indomitable fighting spirit, Hewitt gained the respect of his fellow ATP Tour players and fans across the world during his career. The youngest World No. 1 in the history of the FedEx ATP Rankings made an immediate impact in his first ATP Tour event, lifting his maiden tour-level trophy as a 16-year-old in Adelaide with a final-set tie-break victory against countryman Jason Stoltenberg. Hewitt, who underwent several surgeries to his hips and feet during his career, was known for his counterpunching style and showed the next generation that success could be found from the back of the court in an era of attacking tennis. The former World No. 1 possessed one of the best lobs in the history of the sport and consistently hit his targets with passing shots throughout his career. A passionate Australian, Hewitt also excelled when given the opportunity to represent his country. The 2013 Newcombe Medal winner competed for his nation for an unmatched 19 years in Davis Cup and won a record 59 rubbers in the team competition. Hewitt won his first Davis Cup trophy in 1999 and won all six rubbers he contested en route to the 2003 title. At the inaugural ATP Cup in January, Hewitt led Australia to the semi-finals in Sydney as Team Captain.

Memorable Moment
Due to rain and a four-hour, 25-minute thriller between Roger Federer and Janko Tipsarevic earlier in the day, Hewitt and Marcos Baghdatis’ third-round match at the Australian Open in 2008 began just before midnight on Rod Laver Arena. After dropping the opening set, the Aussie appeared to be closing in on victory as he served for the match a 5-1 in the fourth set. But Baghdatis, the 2006 runner-up, charged back into contention. The Cypriot broke serve, saved match point at 2-5 and then recovered from 2/4 down in a fourth-set tie-break to force a decider. In front of a packed crowd, Hewitt eventually clinched a memorable victory at 4:34 a.m. local time with a forehand return winner. The Aussie sunk to his knees in celebration after securing the latest victory in Grand Slam history. “I should have closed it out in the fourth set when I was playing well,” said Hewitt. “But it’s one of my best wins, mentally, to come back and beat him in the fifth set so I am pretty proud.” 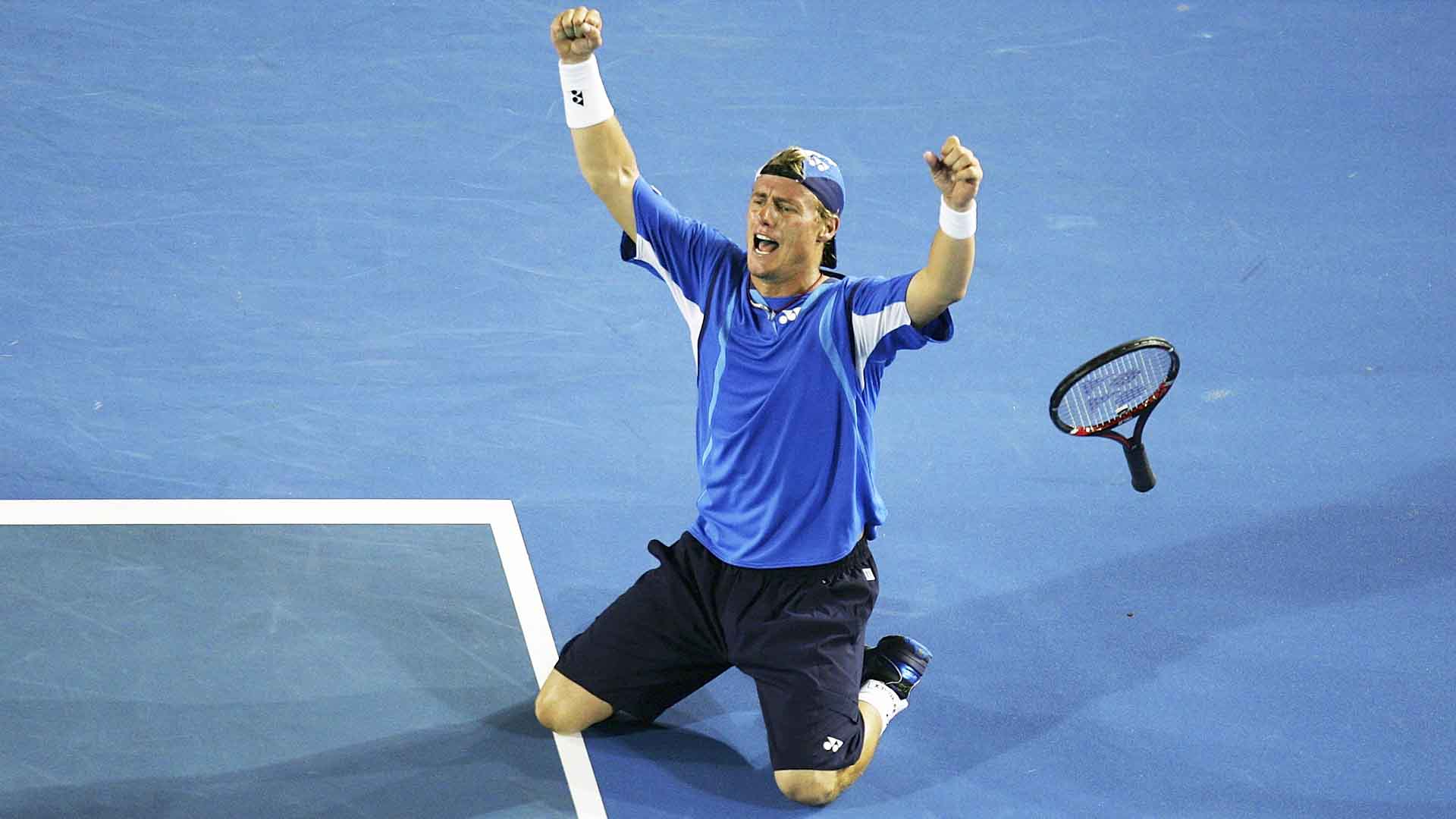 Federer on Hewitt
“I had to turn around the series because he got the better of me many times in the beginning... Lleyton was something special. No doubt about it. Lleyton made me figure out my game and made me definitely a better player, as well.”

Hewitt on Hewitt
“Guys playing from the back of the court obviously started believing once they saw that I was able to do it, especially on all surfaces. It was really kind of the total changing of how tennis was played in a lot of ways, especially on grass.

“Apart [from] the likes of Agassi in 1992, there wasn't a lot of guys that would stay back and play from the back of the court. I think in that, a lot of guys learned or believed that they could do it playing that way. That was probably my biggest thing.”

Broadcaster/Journalist Graeme Agars
From his famous “C’mon,” to his fist pumping displays of aggression with his cap worn backwards, it was obvious when you watched the tenacious Lleyton Hewitt on court that he was clearly somebody who played with an overt intensity rarely seen.

Cut from tough stuff – his father Glynn was an Aussie Rules football player of note and his mother a professional netballer – Hewitt embodied the never-give-an-inch style of play that saw him become the game’s youngest No.1 in November 2001. He was just 20 years, 8 months and 26 days old.

Those who faced him during his peak knew that before they even went on court they were in for a tough day. Even though he didn’t have a killer serve, he possessed lightning speed, the ability to read an opponent, a great return of serve and very solid and consistent ground strokes. It was a lethal package. It was just hard to get the ball past him and he was willing to stay on court as long as it took to win.

He launched his career in a spectacular fashion when, as a teenager, he became the lowest ranked player (No. 550) to win an ATP Tour event. Hewitt claimed that trophy in Adelaide, his hometown, beating Andre Agassi along the way. It only got better from there.