Andy Roddick won 32 tour-level titles during his career, reaching No. 1 in the FedEx ATP Rankings in 2003.

Andrew Eichenholz
This article contains:
The American was known for his booming serve and competitive spirit

In the latest profile on the 26 players to rise to No. 1 in the FedEx ATP Rankings, ATPTour.com looks back on the career of Andy Roddick. View Full List

At World No. 1
Roddick remains the fourth-youngest player to reach No. 1 in the FedEx ATP Rankings, ascending to the top spot on 3 November 2003 at the age of 21 years, two months. The only players to accomplish the feat at a younger age were Lleyton Hewitt, Marat Safin and John McEnroe.

The energetic American did it in style, capturing World No. 1 at the 2003 Rolex Paris Masters and defending it at the Tennis Masters Cup [now named Nitto ATP Finals] to become the first American to finish year-end No. 1 since Andre Agassi in 1999.

Roddick held top spot for 13 weeks, with his reign coming to an end after the 2004 Australian Open. The American reached the quarter-finals in Melbourne, losing a five-set heartbreaker against big-hitting Russian Marat Safin. Roger Federer went on to win the Australian Open and begin his record reign of 237 consecutive weeks at World No. 1.

Grand Slam Highlights
In the 2003 US Open semi-finals, Roddick’s back was against the wall. David Nalbandian led the home favourite by two sets and 6/5 in the third-set tie-break. But Roddick saved match point with a trademark booming serve and never looked back, rallying past the Argentine before defeating Juan Carlos Ferrero 6-3, 7-6(2), 6-3 for his lone Grand Slam title.

No American man has lifted a major trophy since Roddick’s maiden moment at Flushing Meadows.

Since Roddick was 21, it seemed that victory in New York would be the first of many for the big-serving star, but Federer halted the American's pursuit of further Slam glory. Roddick made four more major finals, including three at Wimbledon (2004, 2005, 2009) and one at the US Open (2006). He lost against the Swiss star on each occasion.

Roddick hit 27 aces and won 83 per cent of his first-serve points, but it was not enough to triumph at SW19 for the first time. 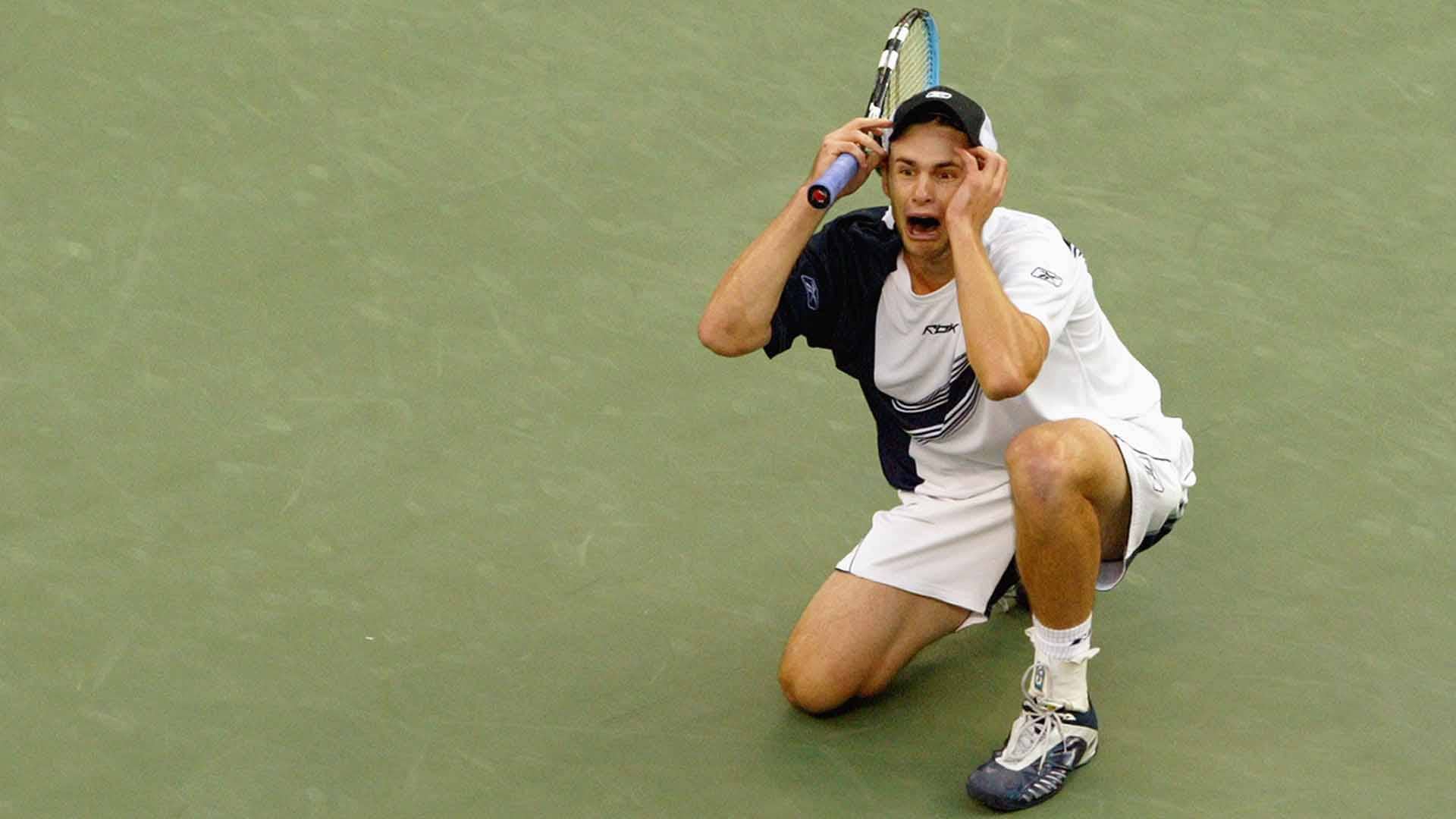 The American qualified for the semi-finals three times (2003, 2004, 2007), but never advanced to the championship match.

Roddick also reached four Masters 1000 finals, but perhaps his most impressive stretch at the level came towards the end of his career. In 2010, Roddick came within one match of winning the ‘Sunshine Double’ by sweeping the BNP Paribas Open and the Miami Open presented by Itau.

At Indian Wells, the American lost two tie-break sets against Ivan Ljubicic in the final before going on to triumph in Miami, beating Rafael Nadal along the way.

Biggest Rivalries
Roddick, given his quick wit, would probably say his ATP Head2Head series against Federer was not much of a rivalry given his 3-21 record against the Swiss. But it says a lot about Roddick’s career that he consistently gave himself opportunities to challenge Federer.

All but one of their matches came at the Tennis Masters Cup [now named Nitto ATP Finals] or in the quarter-finals or later of a tournament. Federer won all seven of their championship clashes, but while disappointed, Roddick was never shy about keeping things light during trophy ceremonies.

“First of all I’d like to congratulate Roger,” he said. “You’re starting to become very, very annoying.”

As he always did, Roddick fittingly got the last laugh, beating Federer at 2012 Miami in their final match.

Federer had a tonne of respect for his rival, too. On the day of his induction into the International Tennis Hall of Fame in 2017, Roddick said: “I want to give Roger credit, I've said it before, he makes it extremely hard not to like him as a person. First text I had when I woke up this morning was from Roger Federer. He's just a great human.”

Roddick also enjoyed rivalries with former World No. 1 Lleyton Hewitt (7-7) and current World No. 1 Novak Djokovic (5-4) among others. 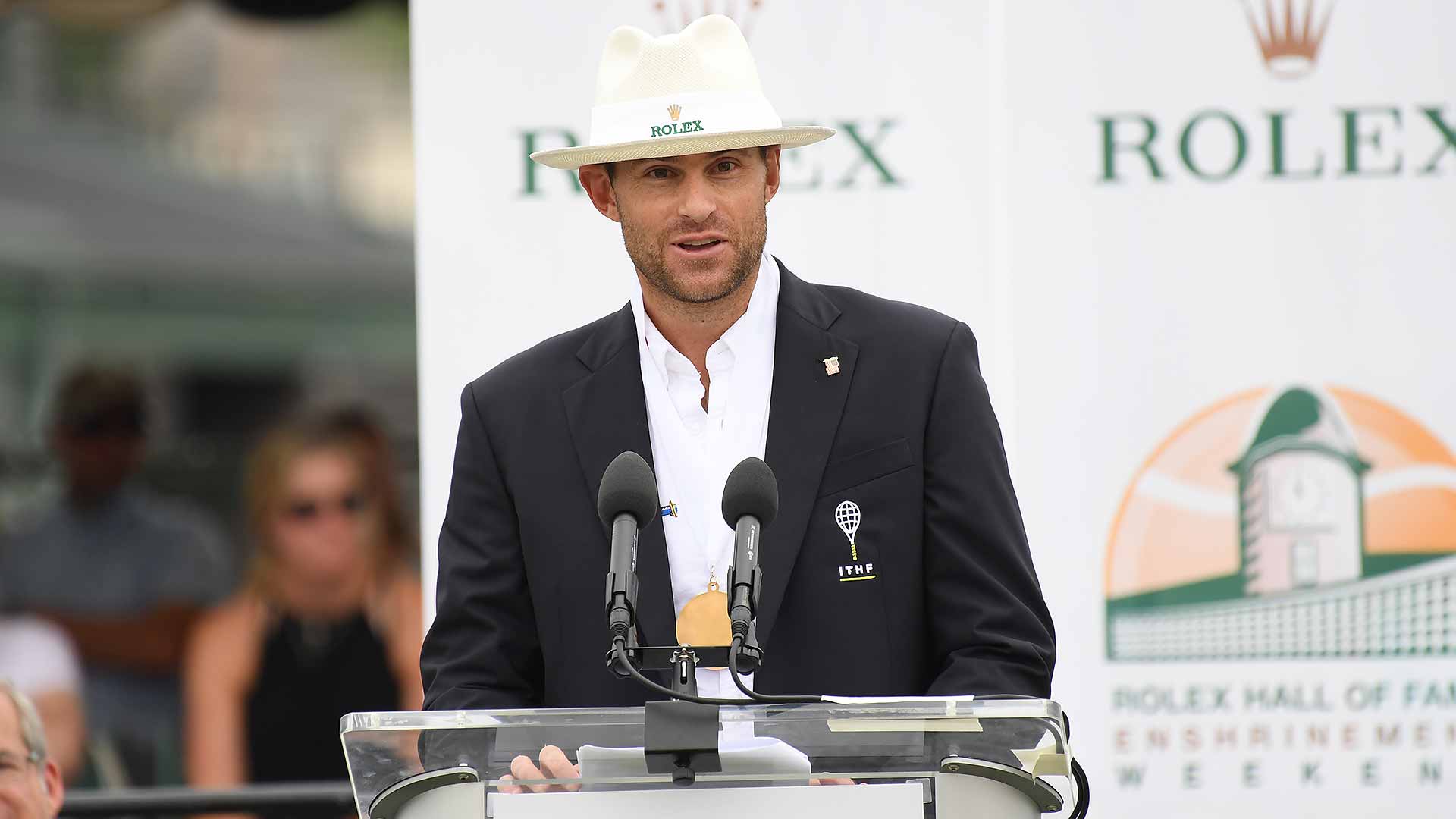 Legacy
Fans will remember Roddick for many things, including his massive serve, his competitive spirit, carrying the American tennis torch and his quick wit.

When Roddick walked on court for a match, he almost always had a chance. No matter whom he faced, his serve allowed him to weather almost any storm thrown his way. Standing at 6’2”, he was not as tall as the likes of Ivo Karlovic and John Isner, but he was successful just the same. Kids would imitate Roddick’s uniquely abbreviated service motion in the hopes of adding more speed to their delivery.

In his prime, Roddick launched first serves quicker than 140 miles per hour that whizzed by opponents. He is one of only six players to hit more than 9,000 aces (9,068). Roddick won more than 90 per cent of his service games, good for fourth since stats have been kept. His second serve was also impressive, hitting arguably the best kick serve of his generation. Roddick only hit 1,581 double faults in 825 matches, averaging less than two double faults per match.

While many will quickly say “serve” if they are asked to remember Roddick, he also was a tenacious competitor. The American didn’t always play his best, nor did he always win, but Roddick always left it all on the court. If he couldn’t solve an opponent’s puzzle, it wasn’t for lack of effort.

Roddick finished inside the year-end Top 10 of the FedEx ATP Rankings for nine straight years (2002-10), consistently leading the charge for American tennis. There was plenty of pressure on the Nebraskan to shoulder the burden the likes of Pete Sampras and Andre Agassi passed on, but he never folded.

“It just is what it is. I wasn't going to shy away from it, for sure,” Roddick said. “You get knocked down. You know the burden. I understand it. I understand the fact that we come from a place which probably had more success than any other tennis country where there are certain expectations. I fell right on the back end of the golden generation, and so [those were] just the cards that were dealt. But as tough a situation as it is, in the grand scheme of things it's a dream. It's something you want. That's not hard.”

Roddick retired when he was just 30 at the 2012 US Open and earned induction into the International Tennis Hall of Fame in 2007.

“I don't know that I've ever been someone who's interested in existing on tour,” Roddick said at the press conference in which he made his announcement.

That was probably the most serious press conference Roddick ever gave. His quick wits were inimitable, whether in the media room or at a trophy ceremony. As focused as a competitor he was, Roddick never took himself too seriously, making him a fan favourite.

Memorable Moment
Players try to forget their losses, especially the tough ones. But Roddick will be remembered for his Herculean effort against Federer in the 2009 Wimbledon final, even if he fell short.

Federer won the second and third sets on Centre Court without breaking Roddick’s serve. In the second set, he led 6/2 in the tie-break, and he missed a high backhand volley at 6/5 that would have given him a two-set lead.

“There's no way it doesn't cross your mind. We're human. We're not Cyborgs,” Roddick said. “At that point, like everything else, there's two options: you lay down or you keep going. The second option sounded better to me.”

Roddick served his way deep into the fifth set, ultimately falling short against Federer. The Swiss triumphed in front of Pete Sampras as he broke the American’s record by winning his 15th Grand Slam title. Roddick didn’t win the match, but he earned plenty of fans that day.

“If you’re lucky as a tennis player, you have that moment where you go into any Starbucks and people want to know more about it,” Roddick said earlier this year in a Facebook Live for the International Tennis Hall of Fame. “That’s my Starbucks match. [Winning] the US Open is not [and] finishing No. 1 [in the FedEx ATP Rankings] is not.”

It was a devastating defeat, but almost a fitting moment for Roddick’s career. He accomplished so much behind his massive serve, big forehand and competitive spirit. But it just so happened that in the big moments, Federer always seemed to be in the way.

One example of when Roddick’s spirit helped him come out on top was in his 4-6, 7-6(5), 4-6, 6-4, 21-19 victory against Younes El Aynaoui in the quarter-finals of the 2003 Australian Open. The American needed five hours against the 18th seed, who had eliminated top seed Lleyton Hewitt in the previous round.

"Strategy was out the door late on in the fifth set," Roddick said. "It was just pure fighting. This was more about heart."

Federer on Roddick
”He's had an amazing career. Some expected better; some expected worse. But I'm sure he's happy with what he achieved because he almost achieved everything he ever wanted... In my mind, he is a Wimbledon champion as well, a wonderful ambassador for the game. I'm thankful for everything he's done for the game, especially here for tennis in America. It's not been easy after Agassi and Sampras, Courier, Chang, Connors, McEnroe, you name it. I probably forget a bunch of them because you had so many good players in the past. It's been hard for him as well at times. I thought he always did the best he could. That's all you can ask from a guy like Andy.”

Novak Djokovic on Roddick
”I admired his career. He was one of the greatest competitors around. [He] probably [had the] biggest serve ever. I'm sure that he's proud of his career, and all American tennis should be. [He] definitely made history in our sport.”

Roddick on Roddick
”For 13 or 14 years, I was invested fully, every day. I've seen a lot of people throughout that time be invested for a year, kind of tap out for a year, come back. I've been pretty good about keeping my nose to the grindstone. I feel like I won a lot of matches from hard work and persistence, even maybe when I had better options as far as shot‑making."

Broadcaster/Journalist Graeme Agars
There was never any mystery about what you were going to get when you went on court against Andy Roddick. His game was a full on, in your face, hard-hitting affair that had no let up.

Powered by a blistering serve and a very capable forehand to back it up, Roddick was a formidable opponent. He was obviously at his best on fast services and but for Roger Federer could have won Wimbledon on three occasions (2004, 2005, 2009) and a second US Open in 2006.

On Tour he was enormously popular and was always working to improve his game under the guidance of different coaches, including Brad Gilbert, Jimmy Connors and Larry Stefanki. He was a student of the sport and not afraid to share his opinions on the game and its development.

Once out of tennis he diversified his interests which include hosting a national sports radio program, a hands on roll in his Andy Roddick Foundation, which raises money to provide education and economic assistance for needy children, and developing the Andy Roddick Youth Tennis Program.