Editor's note: More about the Australia-Great Britain doubles match and the conclusion to the tie can be found here, in a separate report.

Daniel Evans levelled the Great Britain-Australia tie in the Final Eight of the ATP Cup at 1-1 on Thursday, upsetting Alex de Minaur 7-6(4), 4-6, 7-6(2) in the longest match of the event after three hours and 24 minutes. The winning country will advance to the semi-finals, where they will face the winner of Belgium and Spain on Saturday evening.

"That's why I play sport is for occasions like that. I enjoyed it," Evans said. "It hurt a bit, but I enjoyed every minute of it out there. Hopefully everyone in the crowd enjoyed it, as well. I was just proud to put a point on the board for the guys and we obviously didn't, but it was hopefully to go out there and get the win and win the tie, but that's the way it goes."

After his loss to open the ATP Cup against Grigor Dimitrov, Evans has played sensational tennis, beating World No. 11 David Goffin, Moldovan No. 1 Radu Albot and now De Minaur, who won the Sydney International last year.

The Briton had every opportunity to let slip the moment after he failed to convert four match points on De Minaur's serve at 6-5 in the third set. But instead Evans remained calm, and utilised his all-court game in the tie-break, frequenting the net under pressure to close it out before turning to his Team Zone in celebration when De Minaur missed a return.

Evans, who is one spot off his career-high FedEx ATP Ranking of No. 42, embraced the raucous Australian crowd and the atmosphere on the court, using all the tools he has in his arsenal against the speedy De Minaur. Throughout the match, Evans enjoyed lighthearted banter with Australian captain Lleyton Hewitt and Aussie No. 2 Kyrgios, even going back and forth with his own captain, Tim Henman.

But that proved a formula for success for the Brit, who broke serve on three of 13 chances in his triumph. Evans played the match at his preferred pace, using his backhand slice to change the rhythm in rallies and pulling out his topspin one-hander to quickly inject pace into points. The 29-year-old also was unafraid of the net, using the old-fashioned chip-and-charge to swarm the net and put pressure on De Minaur, much to the delight of Henman, who fancied the same strategy during his playing days.

The Aussie refused to go down without a fight in front of his home crowd, showing some tremendous shotmaking to answer some of the questions Evans was asking with his variety. One running cross-court forehand was so crisp, Kyrgios’ jaw visibly dropped in disbelief in the Australian Team Zone. But Evans was simply too good on the day.

"Obviously it stings a bit. It's a match that I obviously did not want to lose, and I felt like I couldn't have done much more out there," De Minaur said. "I left it all out there. He came up with some big points in important stages, especially in that last tie-break, and I mean, sometimes it doesn't go your way."

Kyrgios got his country’s quarter-final tie off to a good start on Thursday morning, defeating Cameron Norrie 6-2, 6-2 to give Australia a 1-0 lead.

"We've got each others' backs. Rusty is the best captain, the teammates have been supporting each other and that's paid off," Kyrgios said. "My serve came through in big moments today. Hopefully Alex can keep it going. He's been playing great."

With Kyrgios’ win, the Aussies had claimed their first 10 matches of this 24-team event

"I love the ATP Cup. I love any sort of team format. I'm just taking it one match at a time. I'm not even thinking about the Australian Open or what time of the year it is," Kyrgios said. "I'm just doing whatever I can and whatever I can do in my power to get the best out of the team and myself." 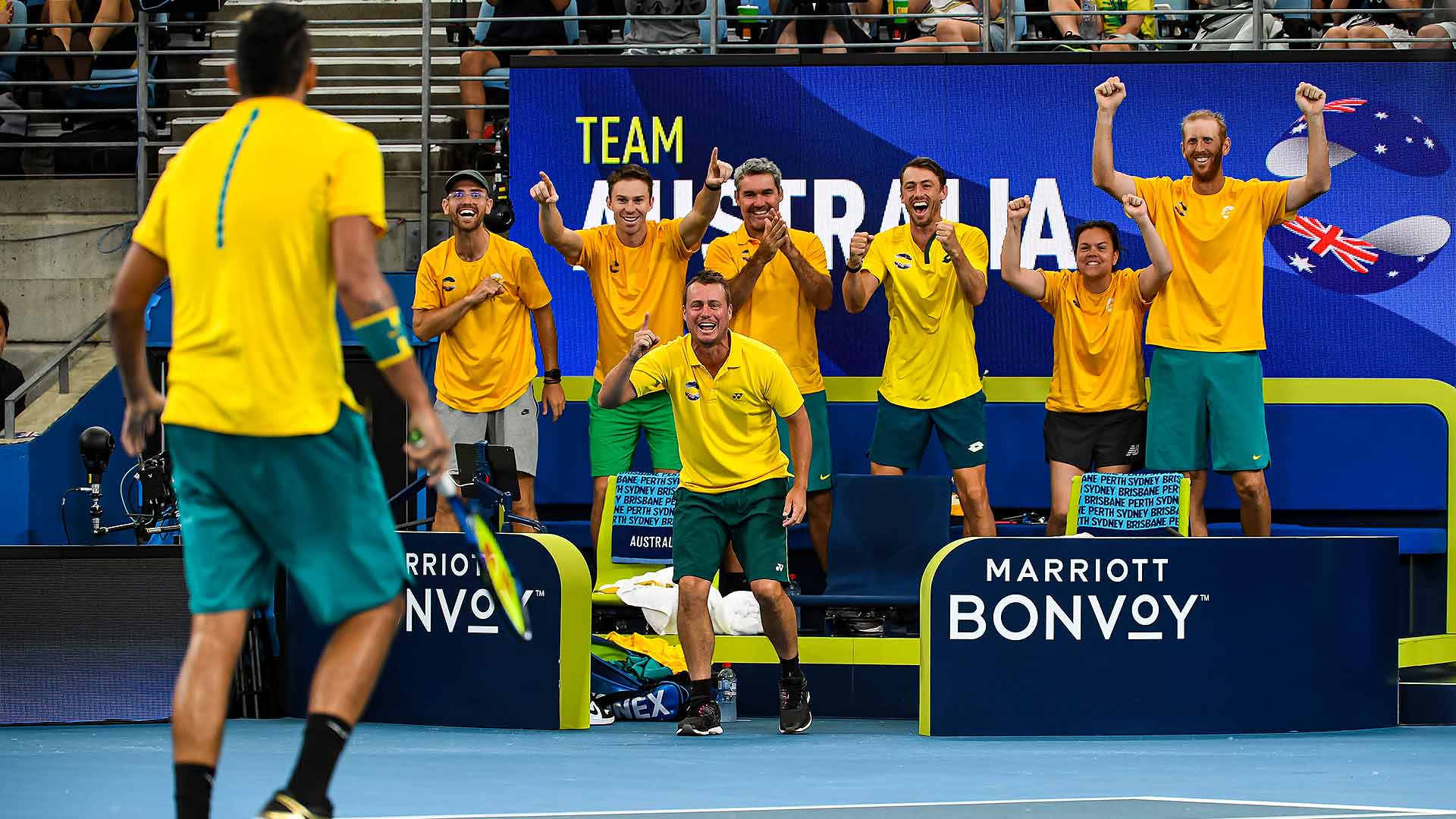 As expected, the crowd was pro-Australia, with plenty of flags flying throughout the stadium. One fan in the lower bowl even held a sign that read, “I Told My Boss I Was Sick So I Could Come Watch Nick.” And it didn’t take long for Kyrgios to get his supporters into the match.

In the first set, Norrie pressed, perhaps too much, leading to an abundance of unforced errors. Kyrgios is one of the most dynamic players in the sport, as he has the ability to hit through almost any opponent with a booming serve and rocket-like forehand. Norrie did not want to give Kyrgios a chance to make the first aggressive shot of the rally, and that cost the lefty in both rhythm and mistakes.

Although Norrie battled hard, pushing several games to deuce, he failed to find a way to put Kyrgios on the back foot. Whenever Kyrgios faced pressure, he responded with a big serve, a trip to the net or a drop shot.

Norrie broke for the first time in the match on his sixth opportunity, which came in the second set. But that break of serve came off a Kyrgios unforced error, when he curled a forehand wide. The Aussie stayed focussed and immediately broke back, and then served out the match to love.