ATP Staff
This article contains:
Safiullin works his way past Australia's Duckworth in No. 2 singles win

Daniil Medvedev and Roman Safiullin, Russia’s latest “secret weapon”, ensured that the defending champion beat Australia on Tuesday to move to 2-0 in Group B play at the ATP Cup.

Medvedev silenced the majority of supporters on the Qudos Bank Arena with his fourth straight victory over Alex De Minaur in a 6-4, 6-2 win over 80 minutes. It followed on from World No. 167 Safiullin’s gutsy 7-6(6), 6-4 victory over James Duckworth in the No. 2 singles match.

“We fight when we play for our country, to the last point,” said World No. 2 Medvedev. “I didn’t feel great prior to the match, so I took some painkillers before I came out. I’m really happy for Roman, he’s winning every match he’s played so far. I watched his match tonight from the locker room. I’ve known him since he was 10, he had a good junior career and has been unlucky with injuries.”

In the doubles match, Medvedev and Safiullin completed a 3-0 clean sweep against the host nation with a 7-6(7), 3-6, 10-6 victory over Australia's John Peers and Luke Saville in one hour and 43 minutes. Peers and Saville had one set point chance at 6/5 in the first set tie-break, and won four straight games from 2-3 in the second set.

Russia now plays Italy on Thursday in a repeat of the 2021 ATP Cup final, while host nation Australia challenges France. Both ties will be contested on Ken Rosewall Arena. 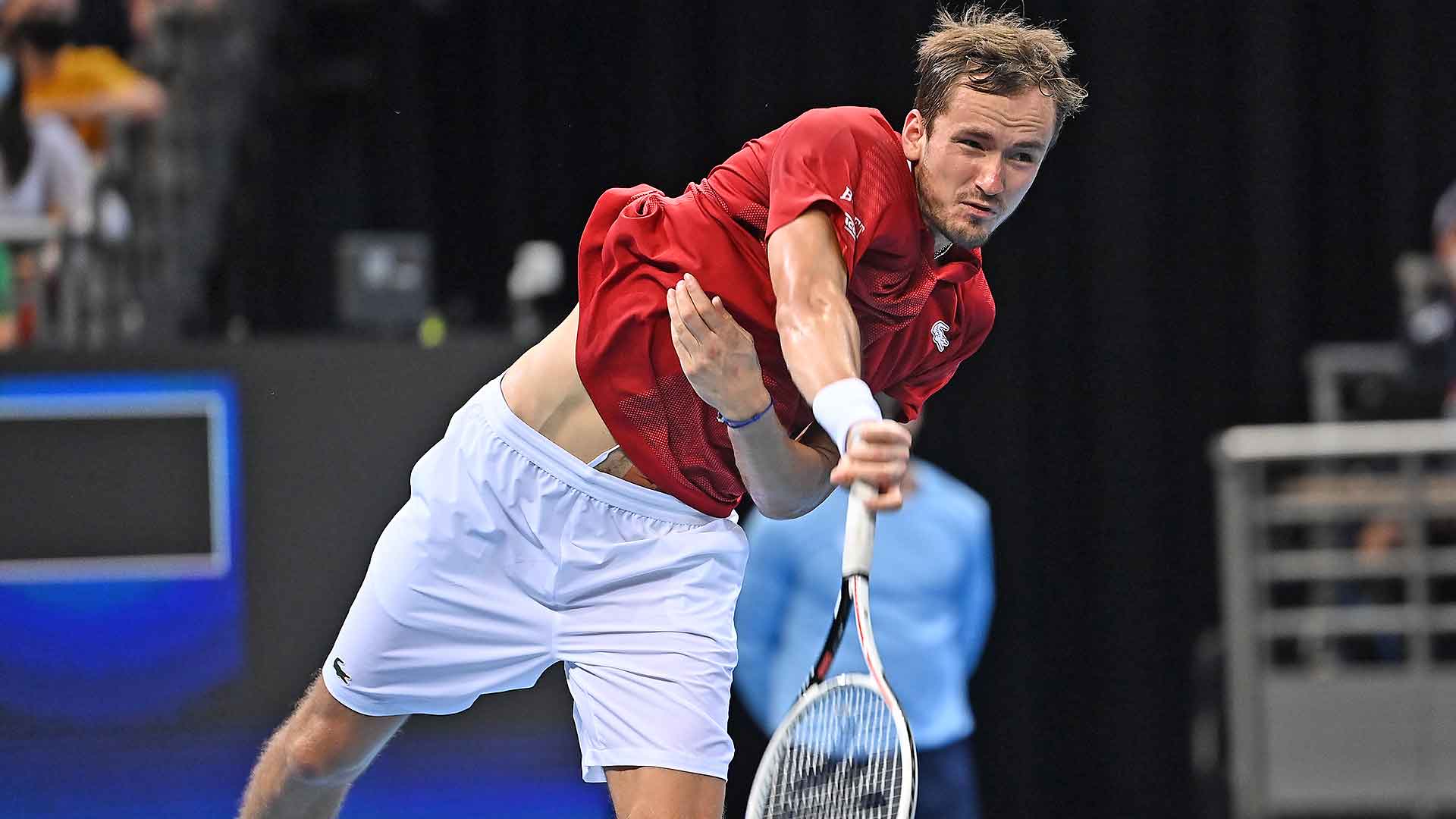 For Medvedev, it was a case of see ball, hit ball in the first three games against de Minaur and it wasn’t until 3-0, 30/15 that the Russian made his first error. The first set then became tactical for De Minaur, with ferocious hitting and intricate slice play aplenty. The Australian did well to recover from 15/40 at 3-5, but Medvedev gave no let-up on first serve and closed out the 41-minute opener with an ace down the T.

Leading 5-4 in the first set, Medvedev put his foot down and won the next six games, continually pushing De Minaur to find the lines from the baseline or move swiftly up the court for low balls. At the changeovers in the Team Zone, De Minaur and former World No. 1 Lleyton Hewitt debated tactics. The 22-year-old fought hard as always, but Medvedev was simply too good on Tuesday night.

"He's a very tactical player, in the sense of he baits you very well to go for a lot," said De Minaur of Medvedev. "He's obviously a very good mover with very good end-range shots. To beat him, you got to obviously be aggressive and take the net, but at the same time you don't want to over press. I feel like I did a bit of that today, and made a couple too many unforced errors... He makes life quite difficult in that aspect and especially on this court his ball was shooting through and it was very tough to get any free points today." 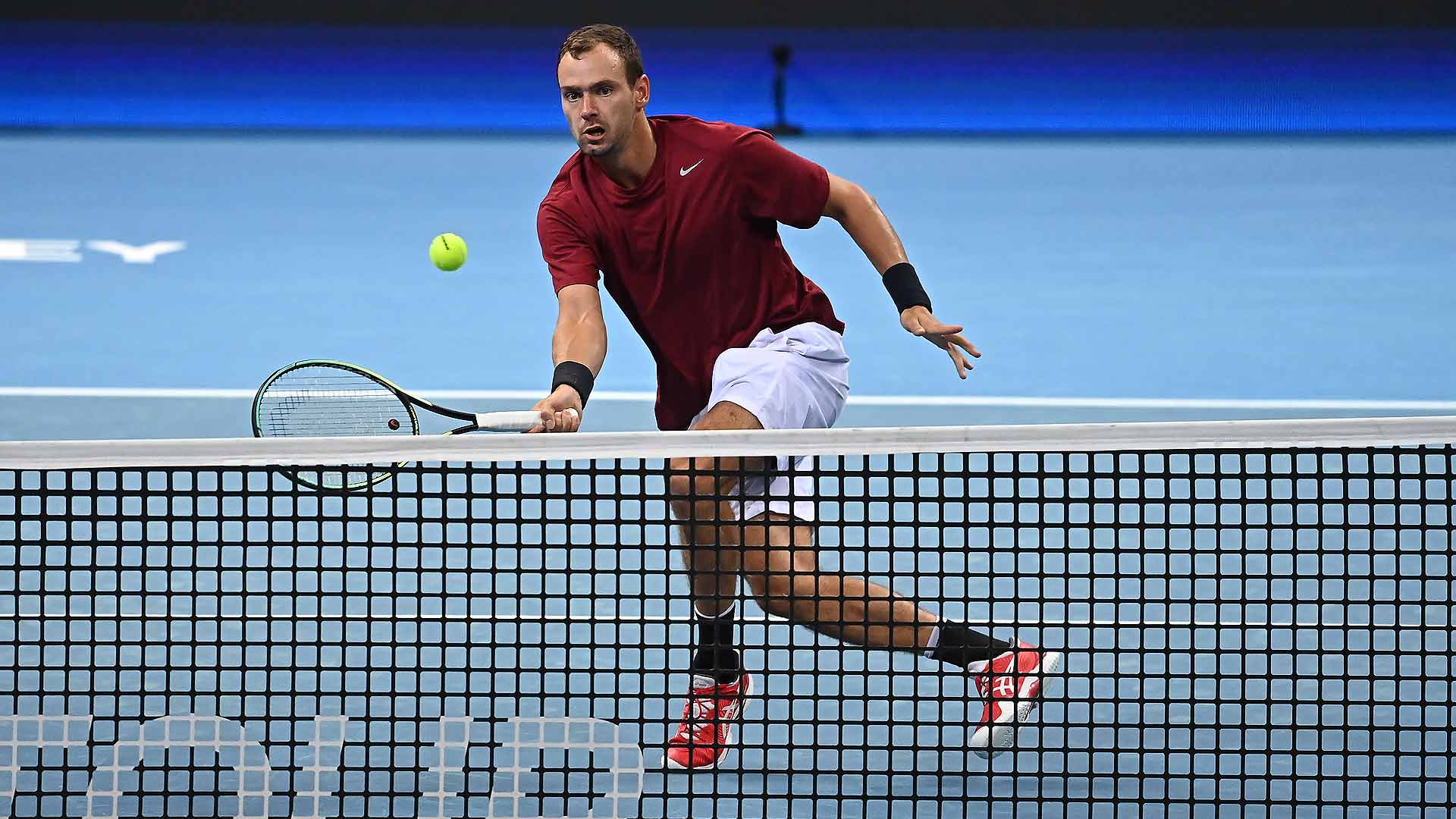 Safiullin, who upset Frenchman Arthur Rinderknech on Sunday, defeated James Duckworth in just under two hours. "It was a great match for me and the match before as well. This one I would say started more or less the same, but then [I was able to] come back in the first set," Safiullin said. "At the end I could push James a bit more and managed to win."

Safiullin, who was the hero in his country's 2-1 triumph against France, was once again undeterred by the moment at Qudos Bank Arena. Despite trailing for much of the first set, he battled into a tie-break, where he secured his advantage.

Duckworth fought hard in front of his home crowd, even holding his hat in his left hand as he crushed a forehand winner in the second game of the second set. But the No. 49 in the ATP Rankings was unable to triumph on his ATP Cup debut.