Former World No. 3 Grigor Dimitrov has reached the quarter-finals or better three times at the Australian Open.

Grigor Dimitrov had just secured a spot among the sweet 16 at the Australian Open, historically his most successful of the four majors, but all the inquisitive press wanted were his thoughts on the role of love in tennis.

He would next play on Valentine’s Day, after all, paired against third seed Dominic Thiem in the fourth round.

“Well, every time you play the first point, it’s 15-Love. Love goes all the way through, I guess, if you think about it. It’s never 15-all from the beginning,” said the 29-year-old Bulgarian, sounding more philosopher than tennis player. “I think we’re all based on love, us humans. You cannot live without it.”

Dimitrov’s performance thus far at Melbourne Park has been all heart. When the 2021 draw was released, he found himself matched up in the first round with 2018 finalist Marin Cilic of Croatia. Talk about tricky openers. But the 18th seed didn’t dwell on his hard luck. Instead, he stepped back, focused on all he had to do on his side of the net, then went to work.

“What can you do? In moments like that, you’ve really got to appreciate the player, appreciate the play, the moment, the opportunity you get again," said Dimitrov. "There are a lot of things like that you just cannot control. I think that’s one of them — who you play in the first round.”

Dimitrov has yet to drop a set through three rounds. Not bad for a player who, prior to the Murray River Open, hadn’t competed since last October, when he reached the quarter-finals in Vienna. It’s the longest he’s ever been away from the match court, he says. “In a sense, I’m a little bit more fresh than I’ve been in a really long time,” said Dimitrov. "Let’s see where that takes me.”

Dimitrov has reached the quarter-finals or better in Melbourne three times. His best showing came in 2017, when he lost an epic five-set semi-final to Rafael Nadal, 6-3, 5-7, 7-6(5), 6-7(4), 6-4. His next opponent, the 2020 Australian Open finalist Thiem, will surely be his toughest test of 2021. However, Dimitrov can take comfort in the fact that he holds a 3-2 edge in ATP Head2Head encounters against the Austrian.

“I’m super proud how I got through it, and it definitely gives me a big boost for everything that’s coming,” he said.

You May Also Like: Aslan Karatsev: Unmasking Russia's 'Secret Weapon'

Like second seed Rafael Nadal (lower back tightness), top seed Novak Djokovic finds himself battling his body. The two-time defending champ said he tore an abdominal muscle in his five-set, 7-6(1), 6-4, 3-6, 4-6, 6-2 defeat of upset-minded American Taylor Fritz. Will that hinder his play in the Round of 16 against 14th seed Milos Raonic of Canada?

“I don’t know if I’ll manage to recover from that in less than two days,” said Djokovic. “I don’t know if I’m going to step out onto the court or not. I am just very proud of this achievement tonight. Let’s see what happens tomorrow.”

The Serb has never lost to Raonic — a quarter-finalist or better in five of the past six years in Melbourne — in 11 ATP Head2Head clashes, including a pair of quarter-final meetings at the Australian Open in 2015 and 2020.

Sixth seed Alexander Zverev of Germany will continue his push for a second straight Australian Open semi-final on Day 7, when he goes up against 23rd seed Dusan Lajovic of Serbia. Zverev won both their previous encounters, each of which went the distance at Roland Garros in 2018 and 2019. 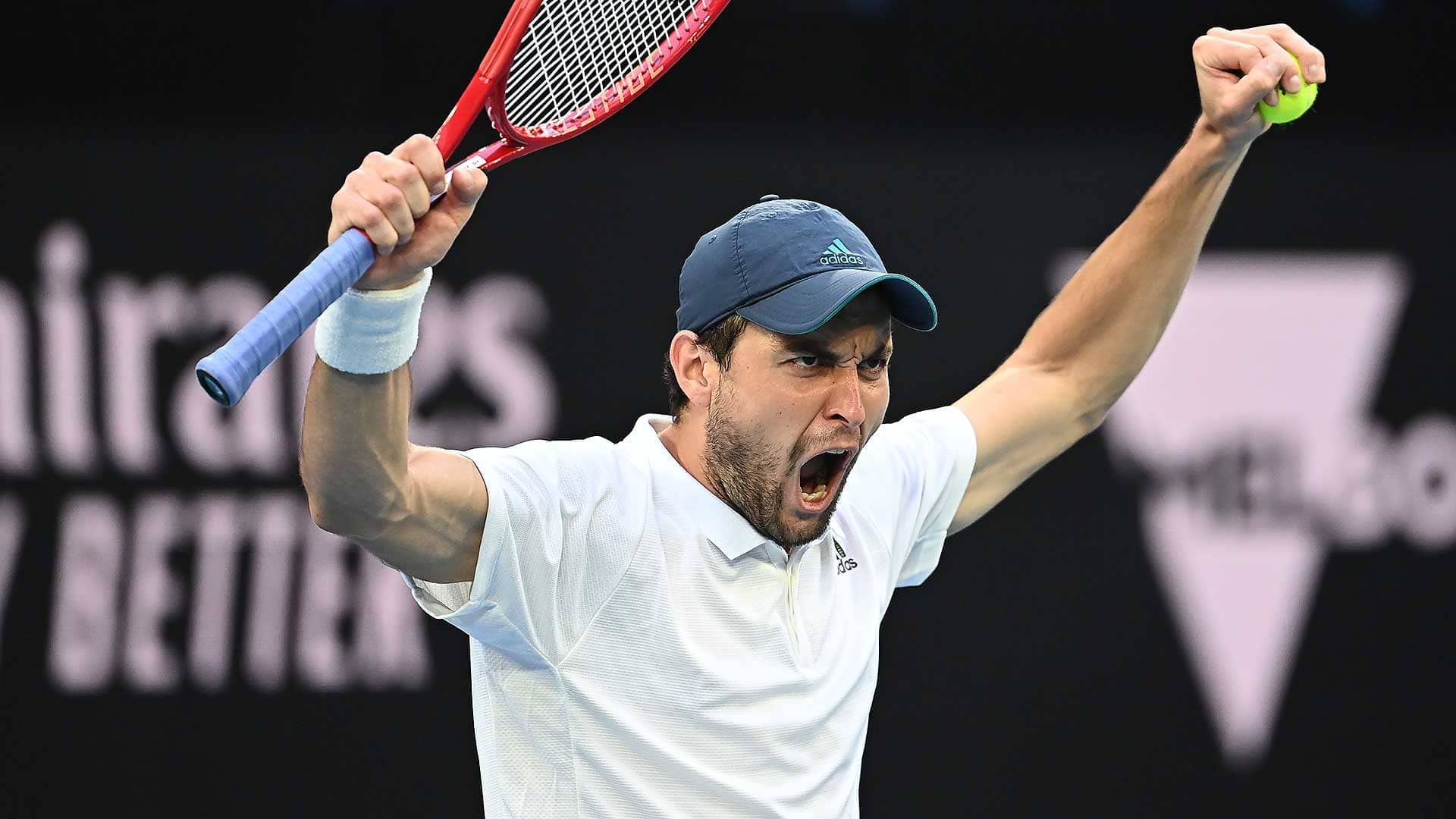 One of the most intriguing matches on Sunday’s lineup will be 20th seed Felix Auger-Aliassime of Canada vs. Russian qualifier Aslan Karatsev. Daniil Medvedev wasn’t kidding when he called Karatsev his country’s “secret weapon” in Russia’s run to the ATP Cup title last week. Though Karatsev didn’t figure in singles action in the 12-nation proceedings, his countrymen were adamant that the 27-year-old is a force between the lines.

While Karatsev stunned eighth seed Diego Schwartzman, 6-3, 6-3, 6-3, to advance, Auger-Aliassime finally got past countryman Denis Shapovalov in his third attempt at a Grand Slam, winning 7-5, 7-5, 6-3.

“In my perspective, he’s not a Russian qualifier now,” said Auger-Aliassime of his next opponent. “He's more a Russian playing in the Round of 16. It’s a tough task. No matches are easy. We saw what he was able to do today against Diego, who is a great player and a tough opponent to beat. So I’m going be ready to face the challenge, ready to compete.”