Baez Is On The Rise, With Del Potro By His Side

Sebastián Báez is a player who gets better every day. The effort he makes on court in every match is clear to see. At 21 years old, he is an extremely inquisitive person off court, too.

Baez always tries to find the positive lessons from every experience he has as he makes a beeline for the ATP Tour elite. His expression transmits the ambition of a man who is just starting out on his journey. However, he has just claimed his first Grand Slam victory by seeing off Albert Ramos-Viñolas on his major debut. It was also his first best-of-five set match.

“This year started differently for me because I had to play the preseason on hard courts and with a Grand Slam on the horizon. In 2021, I started on clay and seeing if I could get into the qualifiers in Challengers. My goals and ranking gradually changed,” Baez said. “Everything I’m experiencing is new for me. But my coach has more confidence in me than I do.”

In the first few weeks of the season, Baez has also won his first ATP Tour match outside of the Intesa Sanpaolo Next Gen ATP Finals in Milan.

However, his rise began long ago. Despite starting 2021 outside the Top 300 in the ATP Rankings, he won six ATP Challenger Tour titles and reached three more finals, tallying 44 wins at that level. It was a record achievement for a tennis player under the age of 21 and it helped him break into the world’s Top 100. 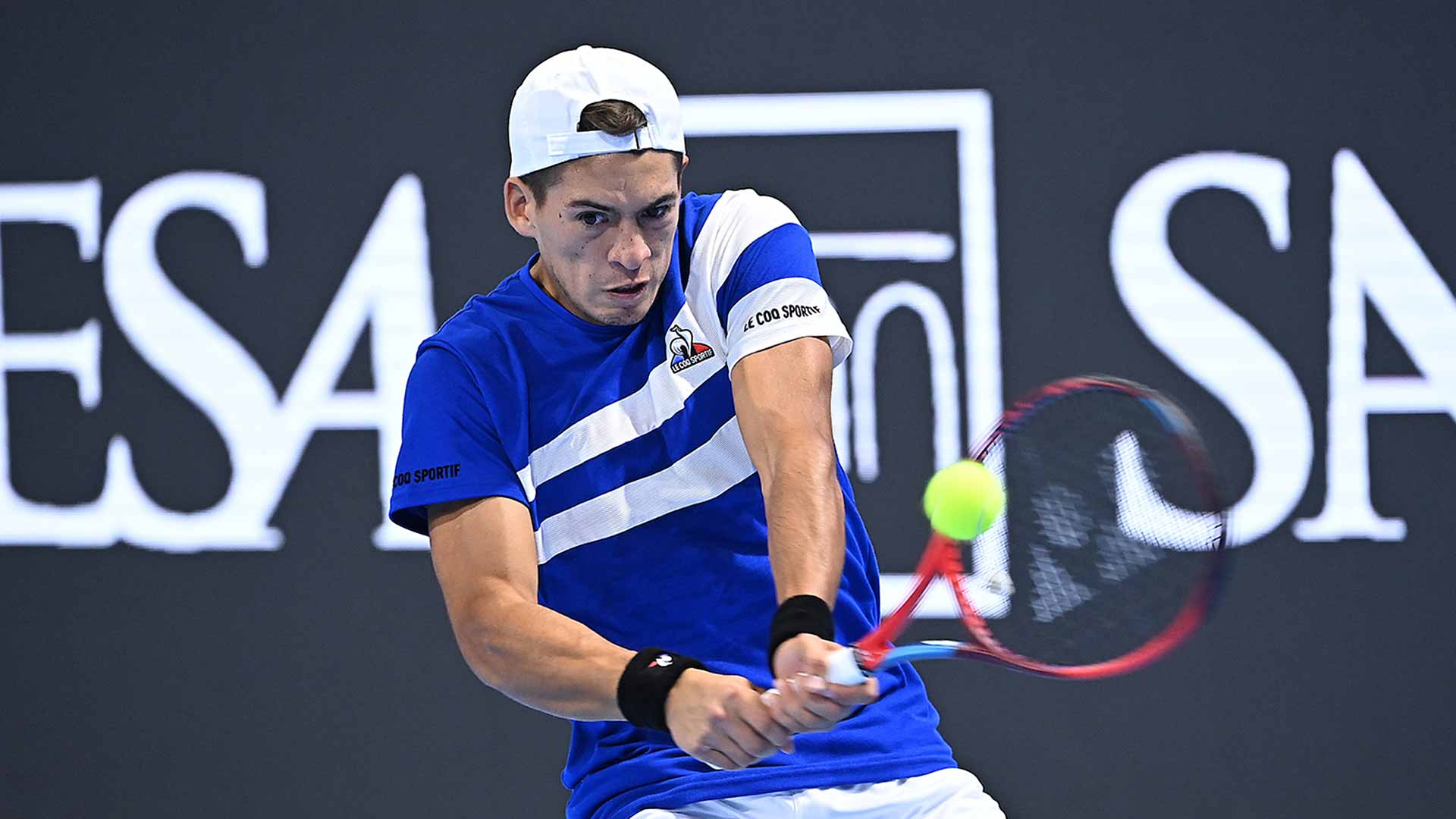 Photo Credit: Peter Staples/ATP Tour
As if that were not enough, the Argentine enjoyed an outstanding appearance in Milan, where he reached the semi-finals, shining a light on South American tennis. At a tournament that brings together the best young players of the year, Báez was able to compete against Carlos Alcaraz and beat opponents of the calibre of Hugo Gaston and Lorenzo Musetti.

“The most positive thing about that week was that I played very good tennis at times, against great players, on a surface I hadn’t played on all year,” Báez admitted. “In Milan I thought I was close and I realised that there are small things I need in order to progress and feel more comfortable playing against them. But the feeling I had was that I was close.”

The 21-year-old Argentine’s coach, Sebastian Gutierrez, provides the biggest influence on his daily work. But there is another very special person who follows him closely and, in one way or another, is always present: Juan Martín del Potro. The ‘Tower of Tandil’ has a good relationship with Gutierrez, which has allowed them to create a bond as Baez’s advisor and mentor that still endures today.

Báez trained with Del Potro for the first time in 2019. Since then, they have shared time on court and moments off of it on countless occasions. They have continued to see each other in recent months and the 2009 US Open champion even calls him ‘pollito’.

“Whenever I practise with Juan he demands more concentration,” Baez said. “Delpo is always talking to us and is always there. When we’re in Buenos Aires, we train and he is a great help... One of the things he always tells me is to trust my team, that it is one of the best [pieces of advice]. That gives me a lot of confidence and the desire to stay on this path.”

Meanwhile, Báez is excited that his opponent in the second round of the Australian Open will be fourth seed Stefanos Tsitsipas.

“It’s going to be a great chance to continue with the things I’m working on, to enjoy myself. But when I get on court, I’m thinking about winning,” Baez noted. “It’s a match that you want to play if you’re watching from the outside. Now I’m going to be able to play it, in a stadium or on any of the courts, that’s what I value about being here. Last year, at this point of the season, I was playing in a tournament in Concepcion, in Chile. That really spurs me on.”

Tsitsipas also had some words of praise for the Argentine. “I saw him play in the Next Gen ATP Finals. I followed his matches, but I will spend some time looking for more. It can be difficult when you play players you don’t know or that haven’t been on Tour for long,” he said.

Báez is approaching the opportunity with caution and focussing on his goal: to be more consistent in order to establish himself on the ATP Tour. In that context, Báez repeats the concepts of ‘process’ and ‘hard work’ as the keys for establishing himself on Tour. “I have to keep doing things as I have until now. [I need to continue getting] better, because these tournaments and the players that play in them demand that.

“If this were my limit, things would be more difficult for me. But we’ve been doing things well, guided by a coach with a lot of knowledge. I do everything they tell me, and I’m progressing along a very long road,” said Baez, who at 5’ 7” has a similar stature to Diego Schwartzman, leading many in his earlier years to tell him he had no future in tennis.

“There are several young Argentines and we’re on this journey together. We’re playing the same tournaments and we encourage each other. Now we’re here, and if one does well, it influences the rest. It will continue to be like that.”

In Melbourne, where the biggest names on Tour show their mettle, Báez gives off a unique and unusual energy. He is taking his first steps in tennis and will do whatever it takes to build a promising future.

Did You Know?
Led by Báez, alongside Juan Manuel Cerúndolo and Tomás Etcheverry, Argentina had three representatives under the age of 23 in a Grand Slam main draw for the first time since the 2004 Australian Open (Guillermo Coria, David Nalbandian and José Acasuso).