Sander Gille and Joran Vliegen let slip a deciding doubles match on Sunday against Great Britain. But the Belgians would not let the same thing happen again on Tuesday evening against Bulgaria at the ATP Cup in Sydney.

Gille and Vliegen, who lifted three ATP Tour titles together in 2019, defeated Grigor Dimitrov and Alexandar Lazarov 3-6, 6-4, 10-7, giving Belgium a 2-1 win in the tie. The Bulgarians could have guaranteed themselves a spot in the Final Eight by winning the tie. But with Belgium’s victory and Great Britain’s 3-0 triumph against Moldova earlier in the day, the Brits top Group C and move through to the Final Eight.

"You're playing on such a big stage with the guys supporting you from the bench. You really have no choice but to keep fighting and trying 110 per cent to win this match. I think we felt like we maybe had nothing to lose now at this point, so we just tried to keep our level and go from there," Vliegen said. "We had some chances in the first set and in the second set, as well. I think it was a matter of time before we could break and then take the match into our hands."

Dimitrov and Lazarov created a magical moment on the tournament’s opening day, defeating Great Britain’s Jamie Murray and Joe Salisbury in a match that ended at 2:46am. The Bulgarians appeared poised to pull a surprise once again in just their second match as a tandem, winning the first set and going ahead by a break in the second set.

But the Belgians were undeterred, finding themselves in perfect position to consistently swat away volleys at the net, triumphing after one hour and 19 minutes. Gille and Vliegen won 87 per cent of their first-serve points (34/39) en route to victory.

Team Belgium may not have won Group C, but they are in with a chance to finish as one of the best two second-placed teams. They will have their eyes on Wednesday’s action to find out if they advance. Bulgaria is eliminated.

"I think we're going to try to practise like we have to play on Thursday. We have a chance, but of course we're going to check all the results," Goffin said. "What can we do? Just praying and hoping that we're going to go through with this, because I think we have a good chance. Anyway, we did our best, so we'll see what's going to happen, but we need to stay in the competition and we need to try to focus like we are still in."

Highlights: Goffin Battles Back Against Dimitrov At ATP Cup

David Goffin turned the tide on Grigor Dimitrov — both in the match and in their ATP Head2Head rivalry — in the night's No. 1 singles clash.

Goffin rallied to defeat the 2017 Nitto ATP Finals champion 4-6, 6-2, 6-2 in two hours and 28 minutes, knotting the Belgium-Bulgaria tie at one win apiece. Entering their battle, Goffin had won just one of nine meetings against Dimitrov, with one of his losses against the Bulgarian coming in the championship match at The O2 in 2017. Dimitrov used that to his advantage early, hugging the baseline and redirecting balls all around the court to send the World No. 11 scrambling.

"I wanted a reaction from the match against Great Britain," Goffin said of his loss against Daniel Evans. "It wasn't great, and I wanted really to show something different, better energy, better attitude, better tennis, aggression. That was the case."

But Goffin, who is typically not one of the most emotional players on the ATP Tour, let out a massive roar after striking his eighth ace on match point to triumph.

Earlier on, Bulgaria's Dimitar Kuzmanov sprung a surprise. He did not own an ATP Tour win entering the ATP Cup. But after defeating former World No. 38 Steve Darcis 6-0, 6-3, the 26-year-old now has two.

"[It's] undescribable. So emotional. So special," Kuzmanov said. "[I'm] living my dream every day here. Just enjoying [it]. It's just a dream for me every day."

Kuzmanov battled hard in his opening match of the event against Great Britain’s Cameron Norrie, falling in three sets. But instead of getting down on himself, Kuzmanov has raised his level even higher. The World No. 417 defeated Moldova’s Alexander Cozbinov on Sunday, and he needed just 77 minutes to dismiss Darcis, who once beat Rafael Nadal at Wimbledon, on Tuesday. 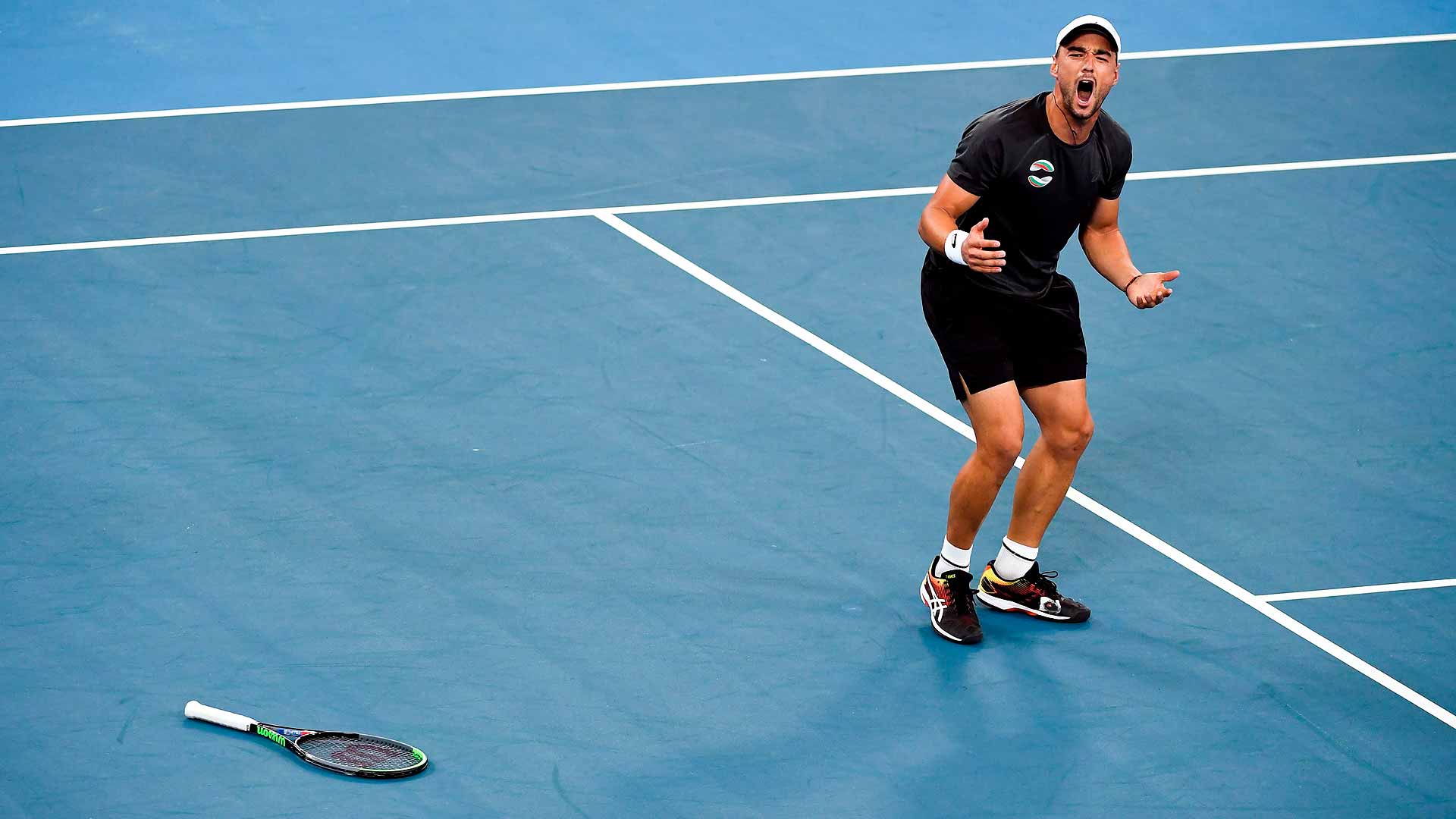 The Belgian typically frustrates opponents with his slice backhand, forcing opponents out of their comfort zone. But Kuzmanov was undeterred, and it was Darcis who made unforced errors during the crucial moments. He gave away the decisive break in the second set by missing a tight forehand into the net, giving Kuzmanov a 5-3 lead. On his second match point, the Bulgarian fell to the court in celebration when Darcis mishit another forehand.

"Since I came here, I'm learning every day on and off the court. As I experienced those emotions, those feelings, and had to deal with all the mental pressure two days ago, today I felt much more confident," Kuzmanov said. "When I was standing to serve on 5-3, I was just focussed on my game plan and not as much as what's going to happen if I win or lose this game, what I'm going to do after the last point."

Kuzmanov struggled to contain his emotions, seemingly shedding tears on the court before embracing his teammates near their Team Zone.