Matteo Berrettini survives a five-set thriller against Carlos Alcaraz on Day 5 at the Australian Open.

Italian powerhouse Matteo Berrettini withstood a spirited comeback from Carlos Alcaraz and a heavy fall in the final set to claw his way into the fourth round of the Australian Open Friday.

Reflecting on almost letting slip his two-sets lead, Berrettini said, "I felt confident, and that momentum was on my side in the third set but then I got broken. My energy wasn't right in the fourth set and in the fifth I just started to think about fighting for every point. In every match something happens [like the ankle injury] but I fought through it."

"I'm very proud of the performance today," Alcaraz said. "It was my first time two sets down and then to be able to come back the way I did... I gave everything on the court."

Avenging a third-set tie-break loss to the 18-year-old Spaniard in Vienna last year, Berrettini produced a serving masterclass early in the match that didn’t allow Alcaraz to work his way into the first two sets.

But Alcaraz struck back in third and fourth sets when he put 100 per cent of Berrettini’s second serves back into play.

Berrettini badly rolled his right ankle in the second game of the fifth set but after receiving treatment from the physio his movement did not appear to be significantly compromised.

After hitting long a swinging forehand volley – that he could have let bounce – Alcaraz was forced to stave off a match point at 5-6, 30/40, when, to his relief, Berrettini dumped a routine forehand second-serve return into the middle of the net. 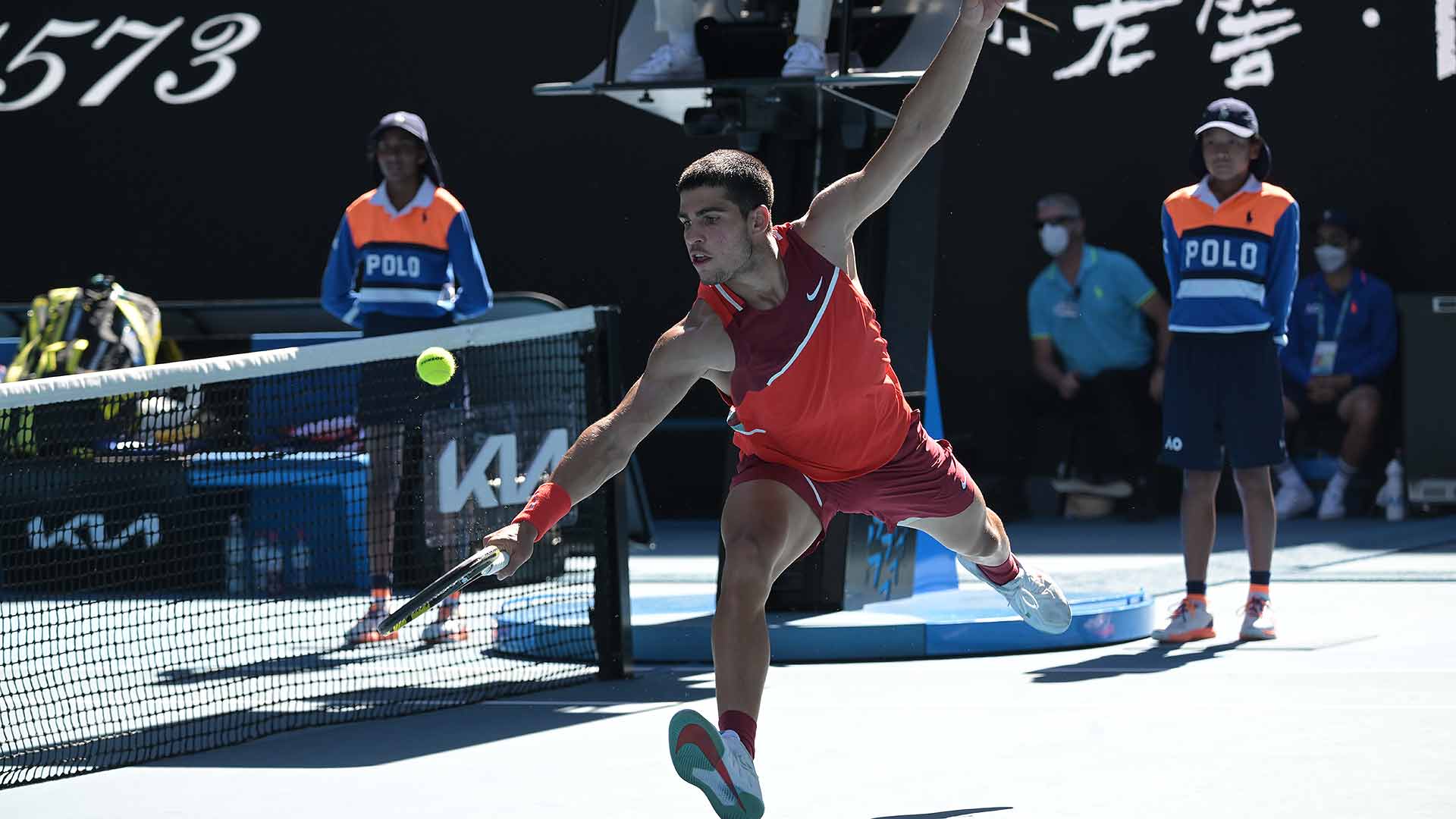 Little separated the players in a tense decider, which came down to a first-to-10 tie-break, but four miscued forehands cost Alcaraz dearly, with Berrettini advancing after four hours and 10 minutes. The Italian will next face 19th-seeded Spaniard Pablo Carreno Busta, who defeated 21-year-old American Sebastian Korda 6-4, 7-5, 6-7(6), 6-3.

Berrettini said that wasn't sure that his edge in experience would give him an advantage heading into the fifth-set Match Tie-break at six games all. "I've played a fifth-set tiebreaker but I never played up to 10, and I think it's pretty weird... something that we are not used to it.

"The last time he beat me 7-6 in the third, so [you could say] he has experience. Today I was, I guess, better than him in certain moments. For sure the fact that he's young, in a Slam is different than in normal tournament."

Berrettini was glowing in his praise of Alcaraz's game and fight in his on-court interview. "At his age I didn't have an ATP point and he will only improve," Berrettini said. "He showed everyone his potential today.”

In his first major since beating Stefanos Tsitsipas en route to the 2021 US Open quarter-finals, Alcaraz said that pushing Berrettini was further evidence that he belongs with the world’s best vying to go deep at the Slams. "When I've played against the top players I have been close, apart from Rafa,” he said. “I think I have the level to play against the top players. I'm getting closer every tournament that I'm playing."

Berrettini said that he didn't expect to be impeded by his ankle in his fourth-round meeting with Carreno Busta. "I'm good. Luckily it wasn't a big one. I'm used to this," he said.