Matteo Berrettini and Hubert Hurkacz will clash for the first time since Miami in 2019 on Friday in the Wimbledon semi-finals.

SF Preview: Will Berrettini Or Hurkacz Seize Their Wimbledon Moment?

ATP Staff
This article contains:
The winner will play Djokovic or Shapovalov in Sunday's final

A Grand Slam semi-final is always a massive opportunity no matter the competitors. But for Matteo Berrettini and Hubert Hurkacz, the stakes will be even higher on Friday at Wimbledon. The question is, who will rise to the occasion and reach his first major final?

Entering the fortnight, Berrettini and Hurkacz were on completely different ends of the momentum spectrum. The Italian was flying high and a top favourite on the bottom half of the draw, fresh off a run to the Roland Garros quarter-finals and a triumph at the cinch Championships, where Berrettini lifted the biggest trophy of his career.

Hurkacz was simply searching for a match win. The Polish star, who claimed his maiden ATP Masters 1000 crown earlier this year in Miami, came into the grass-court major on a six-match losing streak. Making matters worse, four of those defeats came in straight sets.

“You never know when the work is going to come good,” Hurkacz’s coach, Craig Boynton, told ATPTour.com earlier this week. “I’ve been around enough to know that guys at this level, when they take four, five, six, seven losses in a row, they’re eventually going to come good because they’re good players.”

Berrettini predictably moved into the second week with the loss of just one set. But surprisingly, Hurkacz was the only men’s singles player who made the fourth round without losing a set. The three-time ATP Tour titlist did not lose serve in his first three matches, and he faced just four break points through nine sets (all in R1 vs. Musetti).

That is where Hurkacz’s run went from good to great. In a match that spanned two days, he rallied from two-sets-to-one down to oust second seed Daniil Medvedev. And on Wednesday, the 24-year-old stunned the Centre Court crowd by dismissing eight-time champion Roger Federer in straight sets. Impressively, he closed out the match with a jaw-dropping 6-0 set to make his first Grand Slam semi-final.

“Obviously walking off the court realising that I won against Roger, [it was] just a dream come true, especially here on grass in Wimbledon,” Hurkacz, who had never previously reached the second week at a major, said. “[It] felt so special with the crowd around as well.” 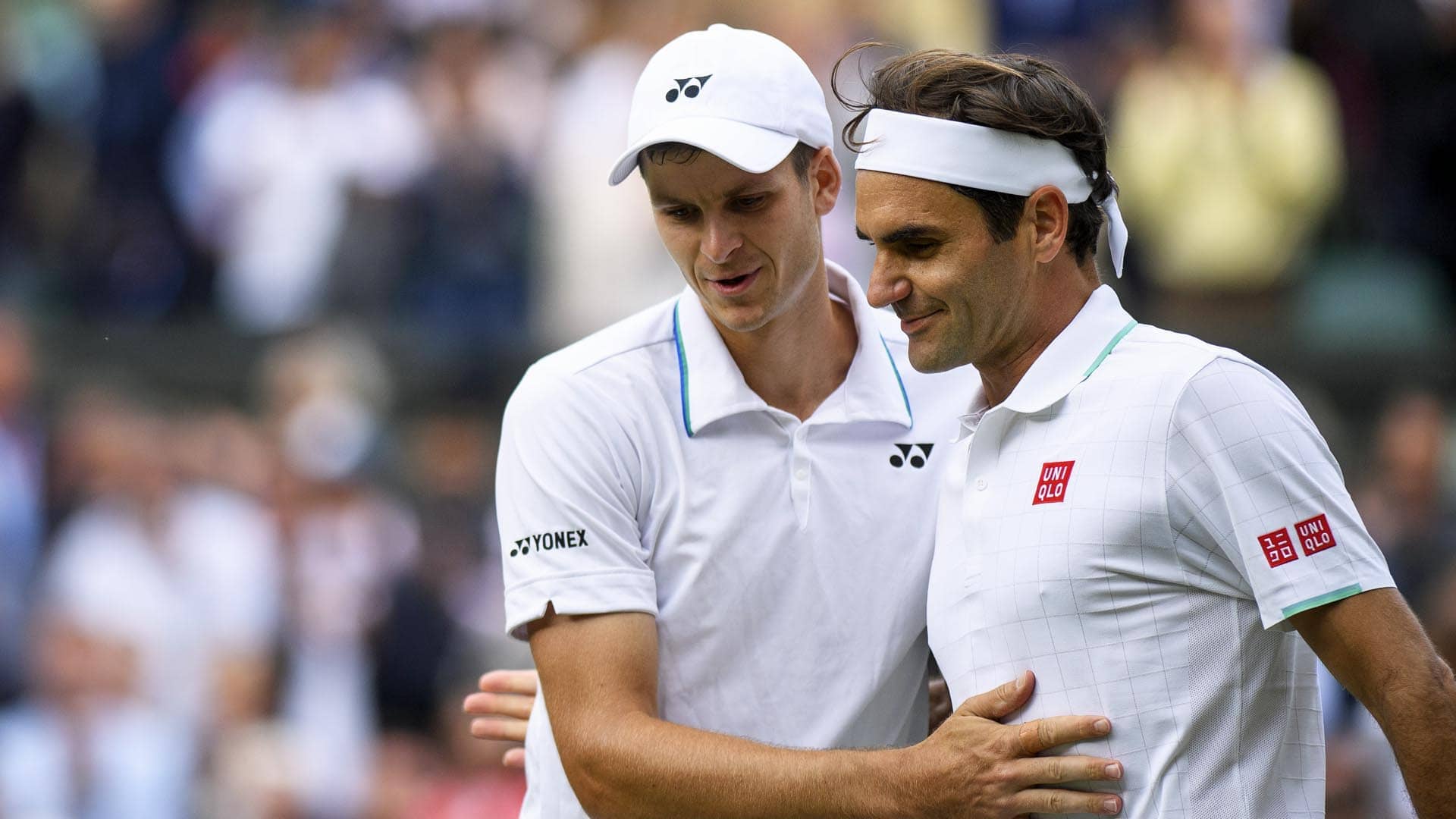 Photo Credit: AELTC/Pool/Getty Images
Berrettini battled past close friend Felix Auger-Aliassime — a first-time Slam quarter-finalist — in four tough sets. The Italian, unlike Hurkacz, has been here before. Although this is his first trip to the last four at The Championships, he powered into the semi-finals at the US Open two years ago. This time, however, the seventh seed feels more comfortable.

“I would say that it's different, but at the same time it's great. Obviously [at the] US Open I didn't know before the tournament that I could achieve that. I just played match after match, and I kind of found myself in the semis. I [was] playing good, fighting like I'm doing now, but it was more unexpected,” Berrettini said. “Stepping into this tournament, I knew that I could do it. I also know that the run is not over, so it's different. Before this tournament, I just felt that I'm a better player now. I have more experience. I had more matches on my shoulders.

“Everything that I am achieving, it's great, but it's not something that I didn't expect.”

Berrettini now has a 23-5 tour-level record on grass, and a 10-match winning streak overall on the surface. The Italian uses his racquet like a hammer and pounds nail after nail into his opponents, leaving them struggling for ways to fight back. 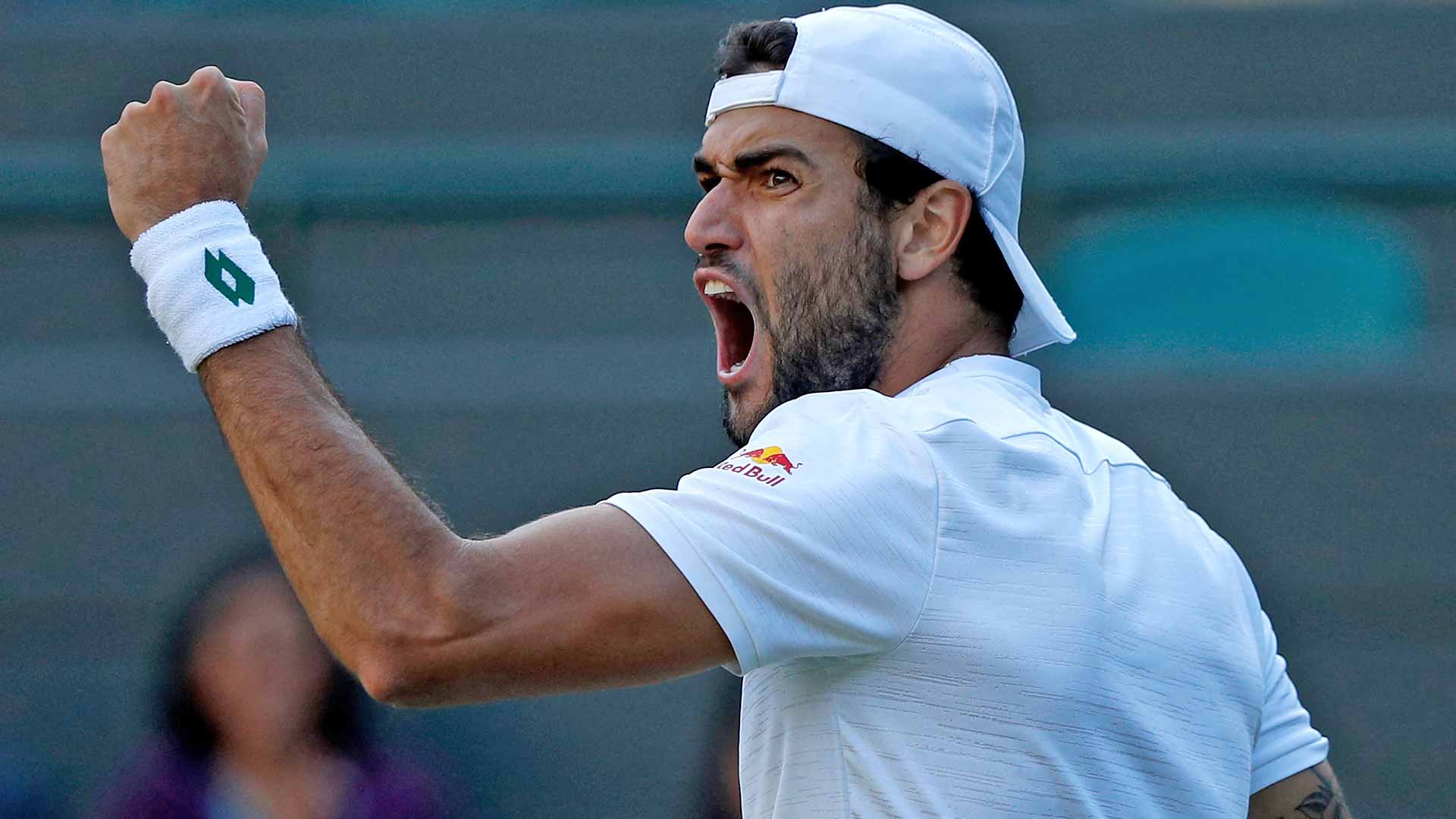 Photo Credit: AFP/Getty Images
But Hurkacz has his own weapons, too. Although he stands 6’5”, the 2018 Next Gen ATP Finals is fleet afoot and is comfortable defending if necessary. He has also made the most of the grass, rushing the net on every opportunity. The Pole has gone to net 202 times this Wimbledon — more than anyone else in the tournament — winning 74 per cent of those points. If Hurkacz is able to quickly take control of points, he might be able to stop Berrettini’s baseline onslaught, and vice versa.

In their only previous ATP Head2Head meeting, in Miami two years ago, Hurkacz defeated Berrettini 6-4, 6-3. At the time, the Pole had just started working with Boynton, and Berrettini was still relatively unknown. Both men were outside the Top 50 of the FedEx ATP Rankings and far off their current level, making this almost a fresh slate for both on the biggest of stages, primed for a breakthrough masterpiece.

History is on the line for both players. If Berrettini wins, he will become the first Italian — man or woman — to make a singles final at The Championships and just the third man from his country to reach a major championship match. If Hurkacz triumphs, he will be the first Polish man to advance to a Grand Slam final and the third player from his country to do so overall (Agnieszka Radwanska and Iga Swiatek).

“Playing Hubert is going to be really tough,” Berrettini said.

That is a given. But finding out who will seize the moment — and play World No. 1 Novak Djokovic or 10th seed Denis Shapovalov in the final — is still very much up in the air.

Did You Know?
There are three first-time Wimbledon men’s singles semi-finalists — Berrettini, Hurkacz and Shapovalov — for the first time since 2006, when Rafael Nadal, Jonas Bjorkman and Marcos Baghdatis advanced to the last four.