Matteo Berrettini had to wait an extra day to start his Rio de Janeiro campaign. Then he had to wait a little longer to wrap up a 6-4, 6-7(6), 6-3 win over home favourite Thiago Monteiro after failing to convert on two match points in the second set.

Thursday’s rain pushed the second-round match back by a day, and Friday’s showers halted the contest just after the Italian rocketed a forehand winner to bring up break point at 3-4 in the third.

"Everything was really difficult," said the World No. 6, who was playing his first clay-court match since Roland Garros. "But you have to [go through] that in order to be in this kind of position in the rankings. At these kinds of tournaments, you have to play your best tennis in the important moments. Today worked out really well, especially in the first and the third, so I'm really happy about that."

After a six-hour delay, they returned with the match on a knife’s edge. Monteiro saved that break point with a big serve to the Berrettini backhand, but clipped the net cord on a second as the Italian closed in on the quarter-finals.

Relying on his usual recipe of big serves and big forehands, Berrettini got to triple match point. After the Brazilian battled back to 40/30, the top seed caressed a clever drop shot to close it out.

Just nine points were required following the resumption of play, and the match finished after 11:30 p.m. 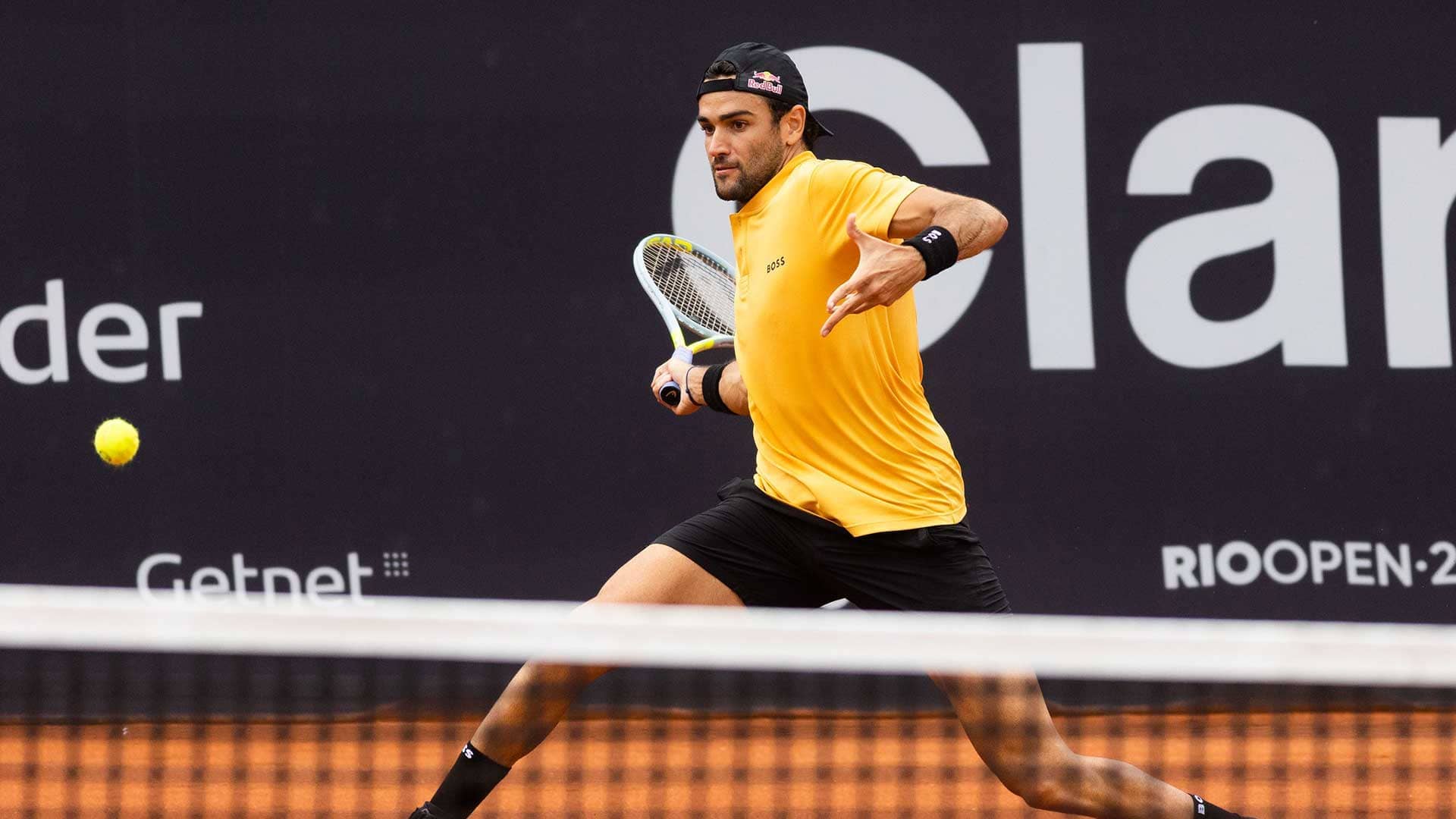 Before the rain, Berrettini won the opening set without facing a break point, but fell behind at 4-1 and 5-2 in the second. He stopped Monteiro from serving out the set at 5-3, then saved a set point on serve in the next game. It was the Brazilian’s turn for a comeback in the tie-break, as he saved two match points in erasing a 5-2 deficit. From 6-4 down, Monteiro won the final four points of the set.

The third set remained on serve until Berrettini’s late charge.

This was the top seed’s first ATP Tour action since his semi-final run at the Australian Open, where he lost to eventual champion Rafael Nadal in four sets. He'll now face a rematch against Carlos Alcaraz, one month after he beat the Spaniard in a fifth-set tie-break in the AO third round.

Following Berrettini, the seventh-seeded Alcaraz finished off a 6-4, 7-6(1) win over Federico Delbonis as the clock neared 2 a.m. in Rio. The match began on Thursday, when the 18-year-old was two points from taking the opening set before rain stopped the match at 5-4, 30/15.

finally comes to an end ✊@alcarazcarlos03 beats Delbonis 6-4 7-6 a day after the match began and will face top seed Berrettini tomorrow in the QF!@RioOpenOficial pic.twitter.com/vU7q8OX189

When play resumed in the early hours of Saturday morning, Alcaraz closed out the opening set but found himself down 3-1 and 4-2 in the second as Delbonis adapted to the wet conditions on Quadra Guga Kuerten. Though his powerful ground game was muted by the slow conditions, Alcaraz twice answered with an immediate break back in a stretch of four straight games against serve.

The World No. 29 dominated the tie-break with aggressive hitting, highlighted by a flying forehand volley that made it 5-1 before the change of ends.

"It has been a really tough day. We were waiting for a long time, we didn't know if we were going to play or not," Alcaraz said post-match. "It was really tough, but I'm really happy with the level and I'm really excited to play my first quarter-final here in Rio."

On his third meeting with Berrettini, Alcaraz added: "Everyone knows the level of Matteo. I lifted myself in Melbourne, but I think on clay it's going to be a little bit different. His serve is not going to be as dangerous as on hard court. But I'm really excited to play against him. We've played great battles."

The pair have split their two ATP Head2Head meetings, with both decided by a final-set tie-break. Alacaraz won their first meeting in Vienna in October.