Watch semi-final highlights from the Mutua Madrid Open, where Alexander Zverev and Matteo Berrettini will battle for the title after taking down Dominic Thiem and Casper Ruud, respectively. Watch live tennis streams at http://www.tennistv.com

Eighth seed Matteo Berrettini is one match away from claiming the Mutua Madrid Open title in his tournament debut after taking down Casper Ruud 6-4, 6-4 on Saturday.

After returning to the Tour with just one match under his belt since March, Berrettini has played himself into form after lifting the trophy at the Serbia Open in Belgrade. In his first appearance at La Caja Magica, the Italian has dropped just one set en route to becoming the first man from his country to reach the championship match.

“It’s a great, unbelievable feeling, especially coming from Monte-Carlo where I wasn’t feeling that good,” Berrettini said. “I won in Belgrade and now I’m in the final, so I’m really looking forward to playing against Sascha. I hope I enjoy it tomorrow the way I enjoyed tonight.”

Berrettini will face fifth seed Alexander Zverev in the final as he seeks his first ATP Masters 1000 title, the biggest trophy of his career. The German owns a 2-1 lead in their ATP Head2Head, although they’ve split their clay court encounters 1-1.

“I saw him, he's playing really good. He's solid. He moves well. For his height, he's really good. He serves well. I mean, he's in the final. He beat Rafa [Nadal] and Dominic [Thiem], probably the best players on clay," Berrettini said. 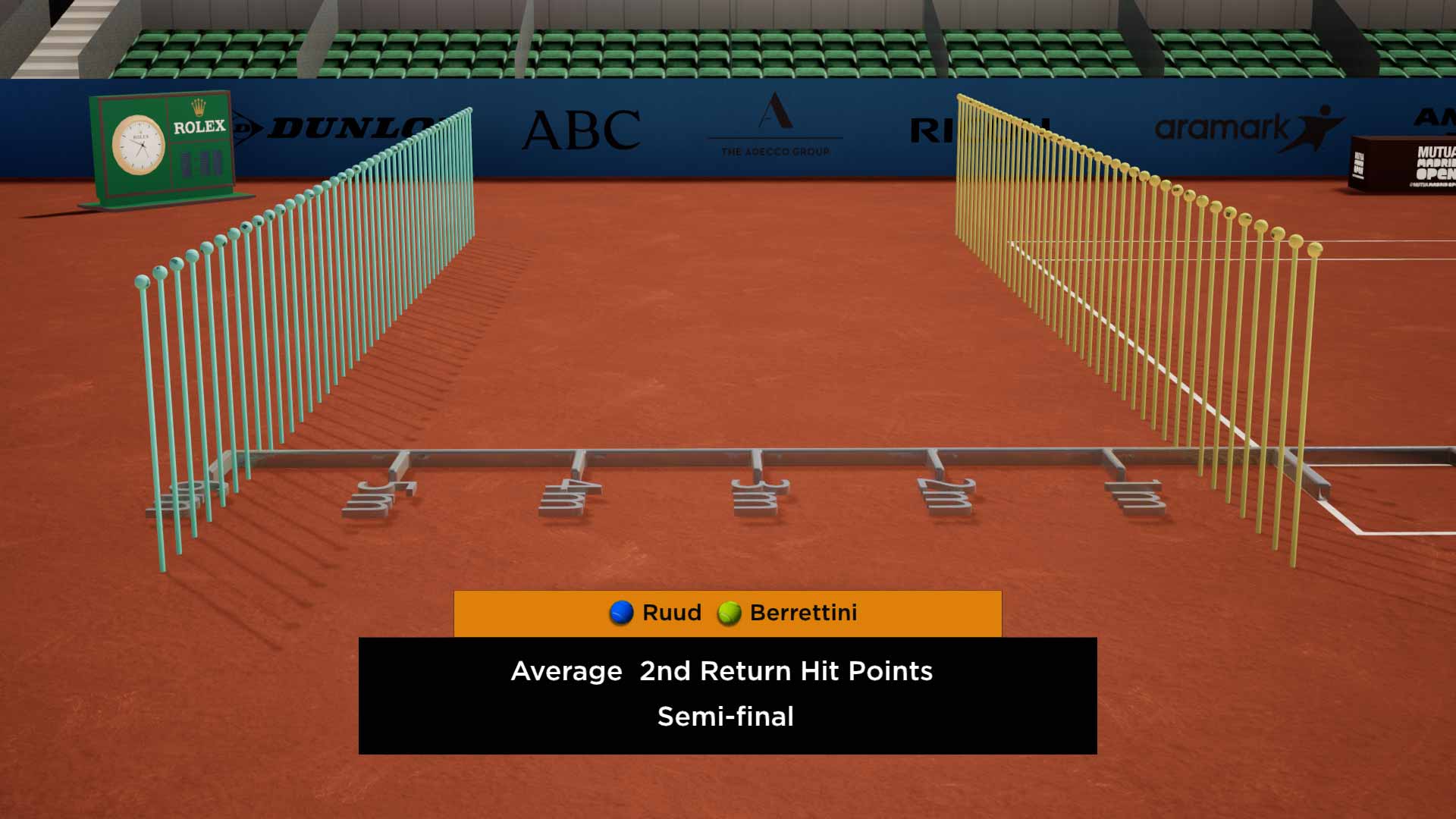 
“It's going to be a challenging match, but I'm in the finals. I guess the best two guys are going to play each other.”

Ruud, No. 22 in the FedEx ATP Rankings, had not dropped serve all week in Madrid and faced only one break point on his way to the final. But Berrettini’s firepower on the return had him under pressure throughout, and he finally surrendered his serve once in each set against the Italian.

“My serve is my weapon, but today I think I returned a lot and I put pressure on him,” Berrettini said. “I was just playing more aggressive. He’s kind of like me, he likes to run around the forehand and play with spin. But I guess today I was playing better than him.

“The other time he beat me, so it’s always a great fight against him. He [reached] three semi-finals in a row [also Monte-Carlo and Munich] so he was feeling confident. I guess that’s why I’m maybe even more happy with my win today.”

The victory levelled Berrettini’s ATP Head2Head against Ruud at 2-2. The Norwegian claimed both of his previous victories on clay, including on the Italian’s home turf at last year’s Internazionali BNL d’Italia where he won 7-6 in the third.

Contesting the last match of the night at Manolo Santana Stadium, Berrettini and Ruud settled into a tense servers’ battle with no break points on offer through the opening eight games. Berrettini stayed patient and took advantage of a shaky Ruud service game at 4-4 to grab the first break of the match, before serving out the set to love.

Berrettini attacked Ruud’s second serves, allowing him to win only 50 per cent (14/28) of those points. The Italian was the main aggressor, firing 24 winners – including 16 off the forehand wing – across an hour and 21 minutes, more than tripling Ruud’s seven. He claimed the decisive break of serve for a 4-3 lead in the second set, and fired a powerful unreturned serve to clinch the victory.

Did You Know?
Should Matteo Berrettini go on to claim the Mutua Madrid Open title, 2021 will be only the second season to start with three first-time ATP Masters 1000 champions, after Hubert Hurkacz’s victory in Miami and Stefanos Tsitsipas’ in Monte-Carlo. In 1990, Stefan Edberg, Andre Agassi and Andrei Chesnokov won the first three ATP Masters 1000 championships in history.