Casper Ruud improves to 2-1 in his ATP Head2Head series against Matteo Berrettini.

The Norwegian landed 20 forehand winners to improve to 12-2 on the surface this year after nearly three hours on Pietrangeli. During February’s Golden Swing, Ruud reached two finals from three clay events. The 21-year-old captured his maiden ATP Tour crown in Buenos Aires and finished as a runner-up in Santiago.

“It feels great [to be in a Masters 1000 semi-final], obviously. These [are the] things that all players work hard for every day in practice, [to] try to make it far in the big tournaments and big events,” said Ruud. "This is my first time in the semi-finals and today was even my first time in the quarter-finals. I'm just enjoying the moment, I guess. I'm in a good flow. I have gained good confidence in my game this week.”

Ruud improves to 2-1 in his ATP Head2Head series against the Italian. The Oslo native claimed a straight-sets victory against Berrettini at Roland Garros last year. Berrettini earned his only victory against Ruud two weeks ago at the US Open.

“The way I played today, I think it was tactically great,” said Ruud. “I tried to play many points the same, trying to move him not only to the sides but also a little bit back in the court, because inside the court he's one of the best players in the world.”

Ruud has played well throughout this week against taller opposition. The 2019 Next Gen ATP Finals qualifier upset 6’6” Karen Khachanov in the first round and claimed back-to-back straight-sets victories against 6’3” Lorenzo Sonego and 6’6” Marin Cilic to reach the last eight.

By advancing to the semi-finals, Ruud has improved on his father’s best ATP Masters 1000 run. Christian Ruud reached his only quarter-final at the level at the 1997 Rolex Monte-Carlo Masters (l. to Corretja). 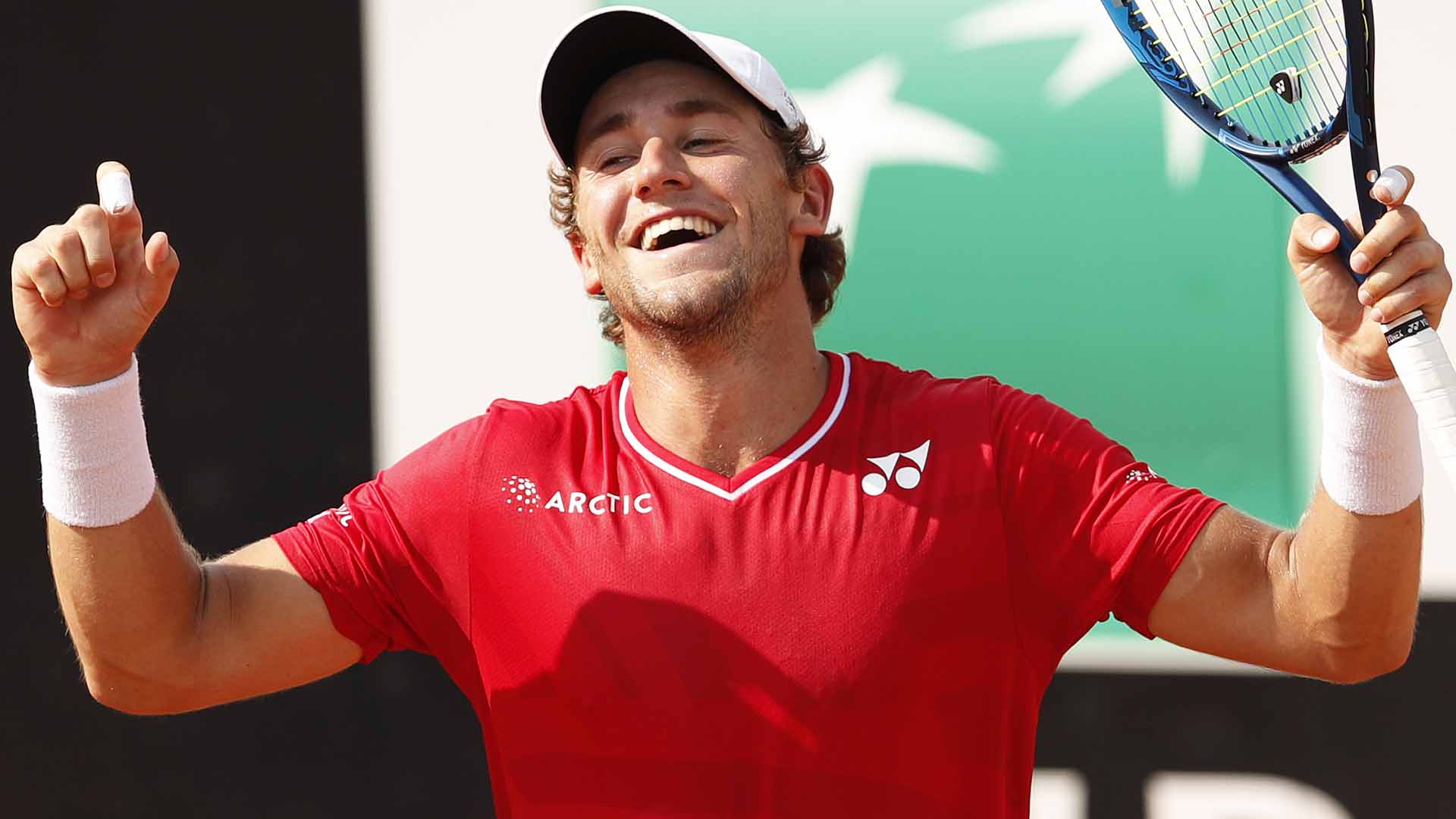 Photo Credit: Clive Brunskill/Getty Images
Berrettini was attempting to become only the second Italian to reach the semi-finals in Rome since 2000. Filippo Volandri, a semi-finalist in 2007, is the only player to achieve the feat this century.

Ruud will aim to reach his first Masters 1000 final when he faces Novak Djokovic for the first time on Sunday. The Serbian battled past Dominik Koepfer 6-3, 4-6, 6-3 in two hours and 10 minutes to reach his 11th semi-final in Rome.

Berrettini overpowered Ruud with strong serving and aggressive forehands to establish a 3-1 advantage in the first set. The Italian showcased impressive touch as he attempted to shorten points, with Ruud committing only six unforced errors in the opener. Serving at 5-4, Berrettini moved to the net to close out the first set after 54 minutes.

After failing to convert three break points in the opening set, Ruud took his first opportunity in the second set. The Buenos Aires champion struck multiple forehand winners and took advantage of forehand errors from his opponent en route to a 3-0 lead. Ruud continued to dictate rallies with his forehand and extracted a backhand error from Berrettini to force a deciding set. Ruud fired nine forehand winners in the second set.

In the tie-break, Ruud recovered from 2/4 down to claim victory. The Norwegian played with patience from the baseline to extract errors and served well under pressure to earn his 17th victory of the year (17-7).