Italians Matteo Berrettini and Jannik Sinner are into the last eight at the Australian Open.

Team Italy failed to reach the semi-finals at the ATP Cup to start 2022, but it was only a matter of time before Italians made their mark on the new season. Matteo Berrettini and Jannik Sinner have not taken long to do just that.

Both Berrettini and Sinner are into the Australian Open quarter-finals, where they have a chance to make more history for their country. If both men advance to the last four, it will be just the second time that multiple Italian men have reached the semi-finals at the same Grand Slam. The last time that happened was 1960 at Roland Garros, where Nicola Pietrangeli and Orlando Sirola achieved the feat. No Italian duo has done it in the Open Era.

But perhaps what is most interesting about Berrettini and Sinner is their unique games, paths and personalities. In some ways they are similar — both men have powerful games and the utmost respect from their peers on and off the court. However, they are not carved from the same Italian stone.

Stefanos Tsitsipas, who will play Sinner in the quarter-finals, compared the two Italians.

“I would consider Matteo more of a heavy server than Jannik, meaning that he does generate more power and more precision with his serve and gets more free points from his serve than Jannik,” Tsitsipas said. “Jannik, I would consider [the] more talented player from the baseline. [He] looks like he's very relaxed when he's playing. Doesn't show much tension when he's out there. Pretty cold-blooded in comparison with Matteo, who looks a little bit more emotional.” 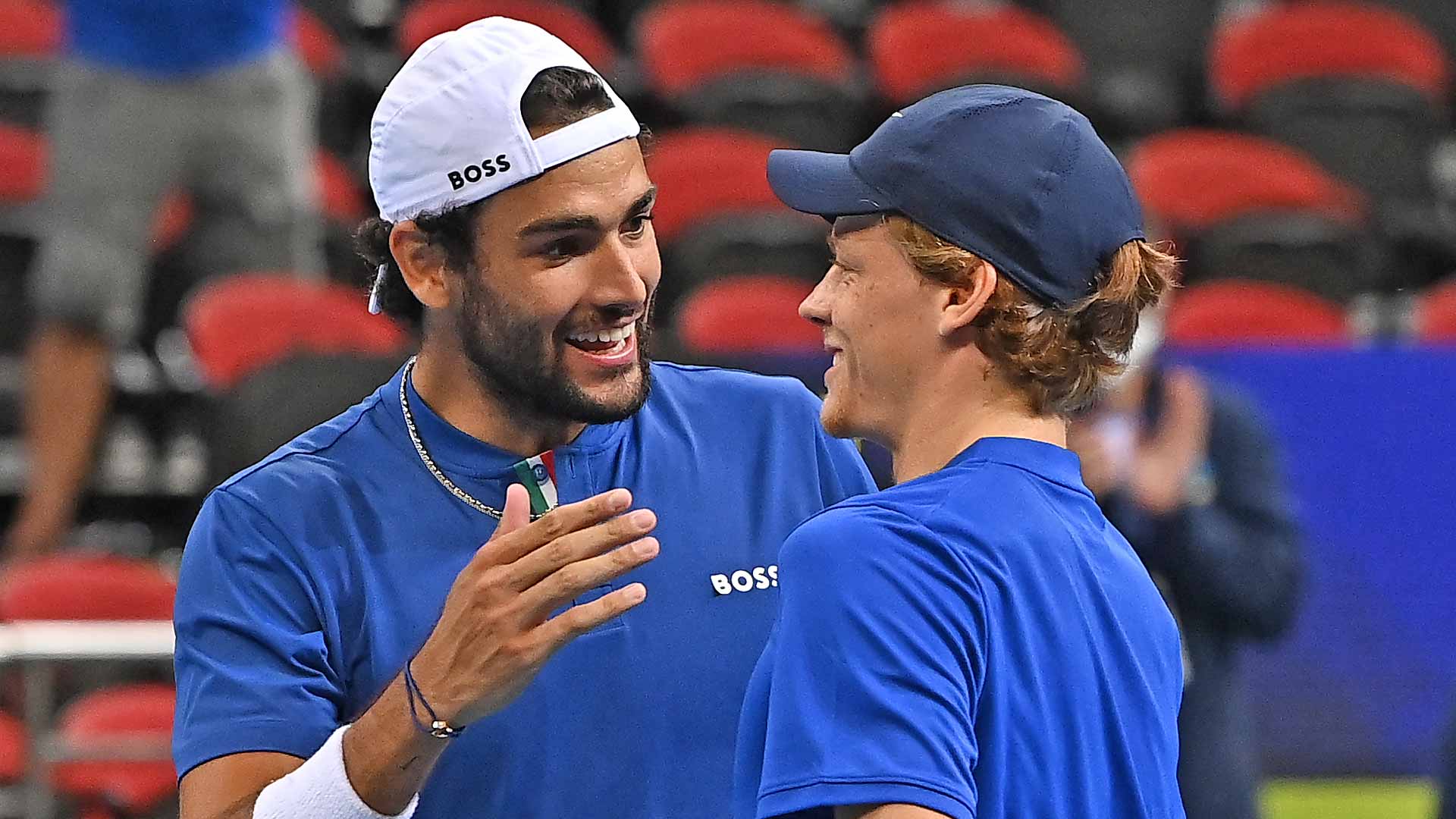 Photo Credit: Peter Staples/ATP Tour
That was not in any way a slight of Berrettini. In terms of personalities, Berrettini is closer to fire and Sinner is nearer to ice. Berrettini is quicker to let out a big roar and a fist pump than Sinner, who remains closer to a flatline through the highs and lows of a match.

In their tennis, Berrettini's game is based on his huge serve and forehand, which he follows to the net when possible. Sinner is a better returner, hits big off both wings and stays on top of opponents from the baseline.

Paolo Lorenzi, the recently retired Italian who has known both men since their early days on Tour, said that first and foremost they "are really good guys and I think that is one of the most important things".

"I think that Jannik is a little bit more shy than Matteo, but then of course when you know him better, he jokes and has good fun. They also have a lot of things in common because they are both hard workers, they’ve had the same coach for many years and they’re becoming good friends," Lorenzi added. "I think the Davis Cup and ATP Cup helped them a lot because they are both obsessed with tennis and they both want to win a Grand Slam.

"When you have the same goal, you can become friends and learn from each other."

Matteo has praised his countryman's maturity.

“Jannik is so young, but at the same time he’s so much older. He knows how to have fun, but how to put the work in at the same time,” Berrettini said. “I think what he’s doing is impressive, but I think it comes from his attitude and the way he goes through things. He’s really mature in that way, and that’s one of the reasons he’s getting crazy results.”

In a way, Berrettini, who will play Gael Monfils in the quarter-finals, has carved the path for Sinner to follow through. After Fabio Fognini became the third Italian man to crack the Top 10 of the ATP Rankings in 2019, Matteo quickly followed later that year following his run to the US Open semi-finals. He has not dropped from the Top 10 since.

By advancing to the last eight at Melbourne Park, the 25-year-old Berrettini has now made at least the quarter-finals at all four majors. One more win would put him in joint second for most Slam semi-finals in history among Italian men alongside Adriano Panatta.

“It means that I'm doing great stuff, which I never believed I could do when I was younger. I always remember being here, playing the juniors and thinking maybe I'm gonna play qualies. I don't know,” Berrettini said. “So it's a good feeling.”

It is easy to forget, but Sinner is just 20, and he reached the Top 10 last November. When Berrettini was that age, he had never been inside the world’s Top 500.

Sinner spent much of his early years focussing on more than one sport. Hailing from San Candido, near the Austrian border, he was one of the best skiers of his age in all of Italy. But once Jannik turned his focus to tennis in his early teens, he has not looked back. Even now, Sinner is fully focussed on the future and most importantly, improving every day.

After Team Italy was eliminated from the ATP Cup, the World No. 10 gave a very veteran answer when a reporter asked what his plans were for the week ahead of the Australian Open.

"I don't know yet," Sinner said, before cracking a smile. "But I think practice every day."