Continuing our Season In Review series, ATPWorldTour.com looks at the two best ATP World Tour matches in 2018. (Beginning Wednesday, we look at the best five Grand Slam matches of 2018.)

2) Juan Martin del Potro d. Roger Federer, BNP Paribas Open, Indian Wells Final, 18 March 2018 (Match Stats)
Entering the match on his longest winning streak to open an ATP World Tour season (17), Roger Federer started the BNP Paribas Open final full of confidence after lifting his 20th Grand Slam title at the Australian Open and returning to No. 1 in the ATP Rankings following his title run at the ABN Amro World Tennis Tournament. Standing in his way was Juan Martin del Potro, who arrived in the championship match in the California desert on a 10-match winning streak after picking up his first trophy of the year at the Abierto Mexicano Telcel presentado por HSBC in Acapulco.

After losses in each of his three previous ATP World Tour Masters 1000 finals, Del Potro was bidding to become just the second man outside of Federer, Rafael Nadal and Novak Djokovic to triumph in Indian Wells since 2004. With two men at the top of their games, the crowd was treated to one of the matches of the year as Del Potro saved three championship points to stun Federer 6-4, 6-7(8), 7-6(2). Read More.

“It's so big,” said Del Potro after lifting his maiden Masters 1000 trophy. “I cannot believe I won this tournament, beating Roger in a great final and level of tennis. We played great tennis today."

Federer targeted Del Potro's backhand in the opener, but the Argentine replied every time, and often with power. Del Potro had Federer on the run, pounding his forehand and stringing the Swiss from side to side. But in the first game of the second set, the 27-time Masters 1000 champion pumped himself up and saved two break points. Federer tried to drag Del Potro away from his comfort zone and closer to the net, but the 6'6” right-hander looked as comfortable there as he did behind the baseline. The Argentine earned match point in the second-set tie-break, at 7/8, but he netted a forehand. After Federer evened the match, Del Potro was visibly frustrated.

“It was a horrible moment for me. I was still thinking about my forehand miss and my forehand error, mistake in the match point," Del Potro said. "It's my shot, my forehand from that side of the court. I never miss that forehand."

Del Potro didn't let his disappointment show on the scoreboard however, as he held serve and stayed even with the five-time champion in the decider. At 4-4, Federer broke for a chance to serve for the match. But this time it was Del Potro's turn to save championship points. The 'Tower of Tandil' recovered from 15/40 down and saved three championship points in total, before eventually reaching a final-set tie-break.

“I lost my serve a little bit, and then he was clean and I wasn't. And then it goes very quickly in the tie-break,” said Federer. “As close as it can be sometimes when you're not feeling it or momentum has shifted, it's just crazy how it can go the other way.”

With the title hanging in the balance, the Swiss hit two double faults and Del Potro sprinted to the title. Del Potro lifted his biggest trophy since the 2009 US Open final after two hours and 42 minutes, lifting his arms when Federer struck another forehand long.

“It was an unbelievable match in all the ways. I mean, we played a great level of tennis. The people were excited on every single point,” said Del Potro. “Roger and I were nervous during the whole match, and we felt that on court... Unfortunately I couldn't stay calm in the tie-break of the second set, but then the calm came again in the end of the match and I played good in the tie-break.”

1) Novak Djokovic d. Roger Federer, Rolex Paris Masters, Paris Semi-Final, 03 November 2018 (Match Stats)
At three hours and two minutes, Djokovic and Federer contested the longest three-set meeting of their FedEx ATP Head2Head series at the Rolex Paris Masters in November. With Djokovic aiming to extend his 21-match unbeaten streak and Federer looking to move one win away from his 100th tour-level trophy, their semi-final encounter at the AccorHotels Arena required a final-set tie-break to settle the contest. It was there that Djokovic finally overcame Federer, notching a 7-6(6), 5-7, 7-6(3) win to set a final clash against Karen Khachanov. Read More.

Meeting for the 47th time in their FedEx ATP Head2Head series, Djokovic earned his fourth straight win over his great rival to extend his advantage to 25-22. Not only did Djokovic overcome 54 winners off Federer's racquet, but his 0/12 break point conversion rate proved to be the first time he had squandered double-digit break chances in his career. The Belgrade native consistently found his best level in the big moments, digging deep in the critical stages of both tie-breaks, including a set point saved at 6/5 in the opener.

"We had epic matches throughout our rivalry but this one definitely ranks as one of the best matches we played," said Djokovic. "High quality tennis. Next to the match I played against Nadal in the semi-finals of Wimbledon, this was definitely the most exciting match I have played this year, and probably the best quality tennis match that I was part of.

"It was also expected, because when I get to play Roger, I know I have to get the best out of myself in order to win. And that's why our rivalries and matches are so special." 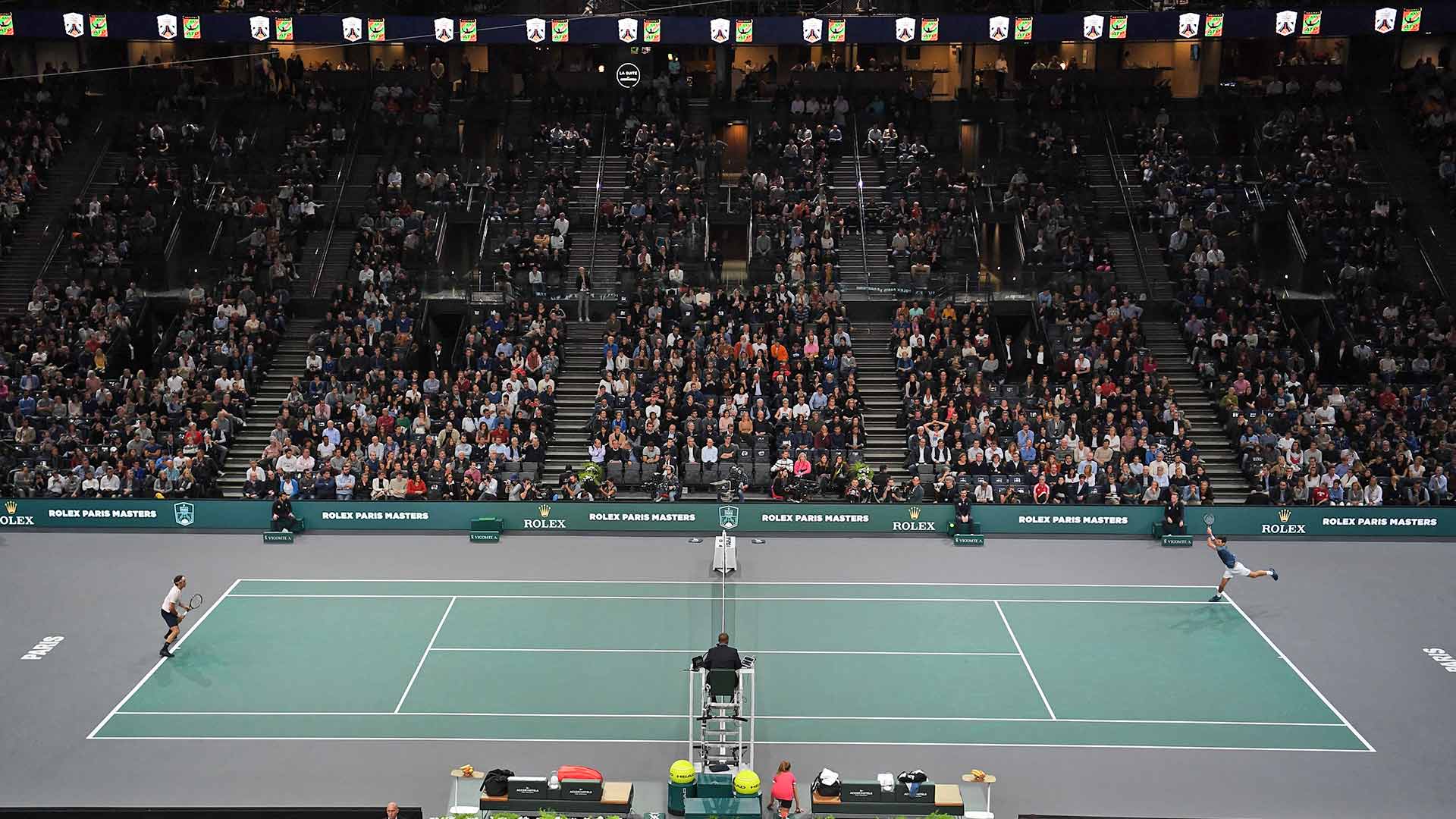 Djokovic, who was guaranteed to return to No. 1 in the ATP Rankings ahead of the season-ending Nitto ATP Finals, also ended Federer's slim hopes of ending the 2018 season as No. 1 for a record-tying sixth time. The result extended Djokovic's winning streak against Top 10 opponents, with 10 consecutive wins against that elite group since falling to Marin Cilic in the Fever-Tree Championships final in June.

In the early stages, Djokovic's delivery proved to be untouchable. The Serbian was on the prowl with Federer serving at 3-4, but the Swiss kept pace, saving four break points in a game which included a moment of magic that put his razor reflexes to the test. A Djokovic forehand clipped the net and spun towards Federer's head, but the 37-year-old quickly raised his racquet and struck a sublime drop volley to the delight of the Parisian faithful. The riveting first set would proceed to a tie-break and Djokovic would seize the initiative after 71 minutes, saving a set point and sealing the opener when a Federer backhand slid wide.

Coming into the match, Djokovic owned a commanding 17-1 record against Federer when winning the opener, but the Swiss turned the tables in the second set. With Djokovic serving to force another tie-break, Federer pounced. The 2011 champion reeled off nine of 11 points to suddenly snatch a late break and send the encounter to a decider, launching a forehand winner down the line to claim the set.

The drama would reach a pulsating crescendo in a final-set tie-break. It marked the third time in which a tie-break has settled a meeting between the two superstars. Djokovic entered with a 2-0 record, having prevailed in the 2007 Montreal final and 2014 Indian Wells championship match. And the trend continued as the clock edged towards 9pm in Paris. A Federer double fault gave Djokovic a second mini-break at 4/1 and the Serbian did not look back, crossing the finish line after just over three hours when a Federer forehand found the net.