Rafael Nadal outlasted Juan Martin del Potro, coming from two sets to one down to reach the Wimbledon semi-finals.

Continuing our Season In Review series, ATPWorldTour.com looks at the third through fifth best Grand Slam matches of the 2018 season.

5. Roger Federer def. Marin Cilic, Australian Open, Final - 28 January 2018 (Match Stats)
In the past, Roger Federer had cried tears of anguish at the Australian Open. Nine years ago, the Swiss couldn't hold back his emotions after losing an epic five-setter for the championship against Rafael Nadal. This year in Melbourne, Federer's tears were full of joy.

The 36-year-old star’s back was against the wall when he met 2014 US Open champion Marin Cilic, who found some of his best tennis to overcome a break deficit in the fourth set of their Melbourne clash. Suddenly, the first Grand Slam final of the season came down to a deciding set, and Federer faced two break points in its opening game. Major title No. 20 was slipping away.

But Cilic could not put a forehand return in play on either occasion, and Federer raced away to a 6-2, 6-7(5), 6-3, 3-6, 6-1 victory to make history, joining Roy Emerson and Novak Djokovic with a record six Australian Open titles.

“All day I was thinking, ‘How would I feel if I won it, how would I feel if I lost it? I'm so close, yet so far.’ I think I was going through the whole match like this,” Federer said. “I've had these moments in the past, but maybe never as extreme as tonight. Getting to 20 is obviously very, very special, no doubt.”

Sure, Federer lifted the trophy, his third in five majors. But the fifth-set scoreline could be misleading. There’s no reason to think that if sixth seed Cilic converted on one of those break points in the decider’s opening game, that he would not have been the one to storm ahead to victory. Cilic seemingly grabbed control of the match as he stood on top of the baseline, hammering away at groundstrokes and taking time away from Federer, keeping him from playing aggressively himself.

“I was hitting the ball great. I was just playing phenomenal. Then first game of the fifth set was more or less crucial at the end,” Cilic said. “Just a little bit tougher game, my service game next game. It just ran away from me.”

You May Also Like: Federer Beats Cilic For 20th Major Crown

But it was Federer who came out on top once again, breaking Cilic six times in the match and winning 53 per cent of return points in the fifth set against one of the sport’s biggest servers to triumph. Suddenly, Federer was able to escape the rallies in which he was pulled from side to side by the Croat, using precise serve placement to gain the upper hand. And if you thought winning had gotten old for Federer, his tears during the trophy ceremony said otherwise.

“It's about living the emotions that I went through tonight again at the trophy ceremony, going through a tough rollercoaster match, five-setter against Cilic, who is a great player, and then getting No. 6 here, No. 20 overall. It's just a very special moment. Defending my title from last year, the fairytale continues,” Federer said. “It's definitely a very special moment in my life again.”

“The atmosphere was very, very intense. Everybody was on their feet. [It was] 2 a.m. in the morning, fifth set, 5-All,” Cilic said. “It doesn't get better for the crowd.”

The scoreline itself was epic in that Cilic battled back from two sets down for the sixth time — and just the second time in four and a half years. But the decider was what made this tilt stand out; a clash of wills that went deep into the New York night.

Cilic led 5-2 in the fifth set and held a 0/40 lead on De Minaur’s serve. The Croat had found his game from the baseline, and his firepower was proving too much for the tiring Aussie speedster. At that point, it appeared the teenager’s time on centre stage was near its end.

But De Minaur simply did not go away. He found his very best on Cilic’s match points, chasing down ball after ball, when the 2014 champion didn’t necessarily do anything wrong. De Minaur found his way back on serve, and was on the verge of stunning the Croat. But Cilic finally converted his eighth match point.

“It was just incredible to find the composure, as well, also to stay focused, to stay in the moment, even though I missed so many opportunities there to finish it off, I stayed very focused,” Cilic said. “Obviously that fifth set was, as well, very emotional from both sides. I felt that he was also getting a little bit tired, but still he was pushing and pushing. Big credit to him for staying in there, almost getting to the line. What separated us was a couple points, nothing else.” 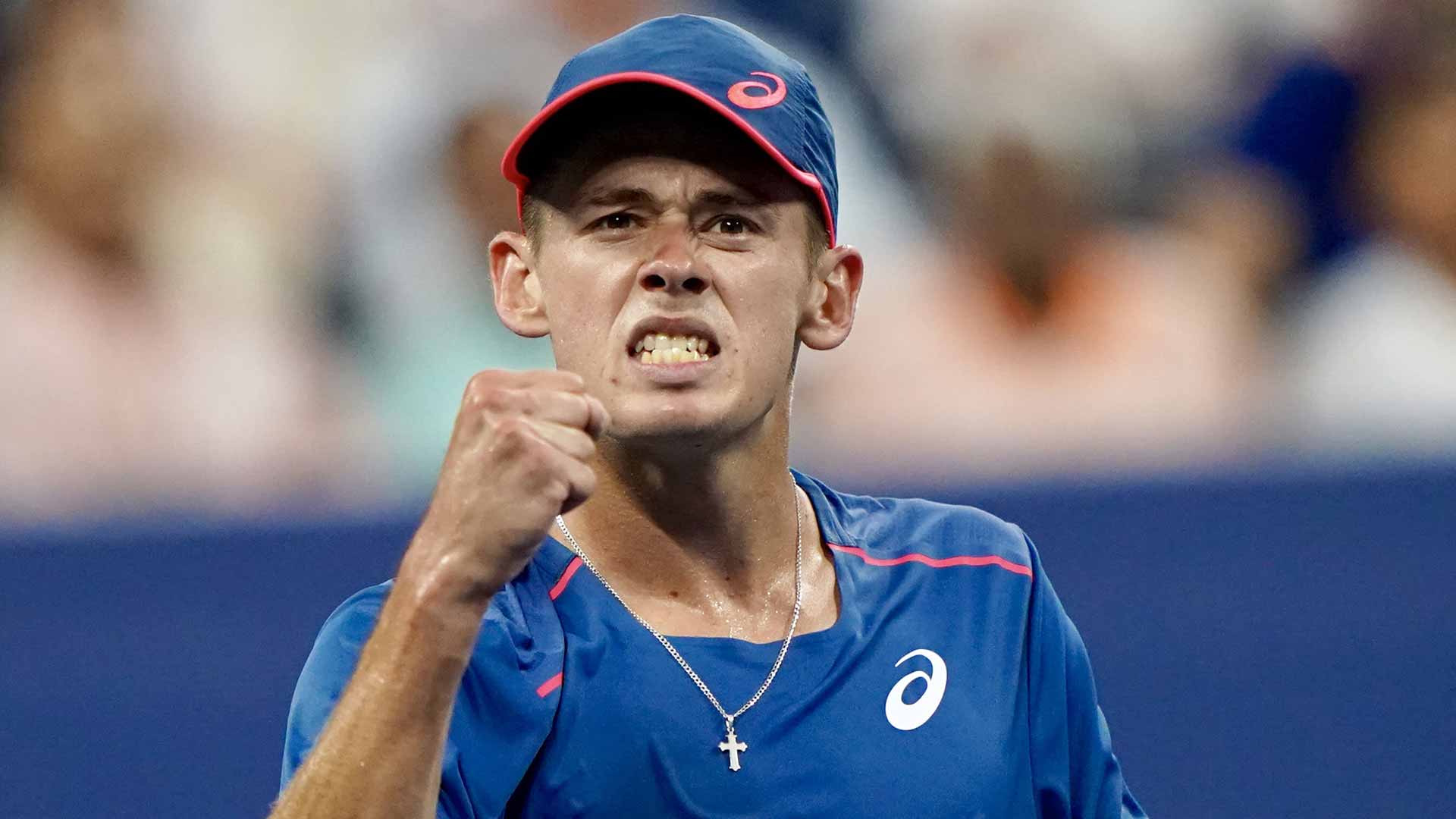 It’s not often a star is born in a loss. And De Minaur had already proven himself on the ATP World Tour, reaching championship matches in Sydney and Washington, D.C. But in New York, in the first classic match on the new Louis Armstrong Stadium, De Minaur showed that he is ready and willing to compete against the very best in the sport, no matter what it takes.

“Every time I step out on court, I tell myself that I'm going to play until the last point. He was going to have to beat me. Eventually that's what he did,” De Minaur said. “But I did everything in my power to try and get back, [I gave] every ounce of energy [I had] to try and push. I managed to come back, but then he was too good at the end.”

While the tennis was top-notch throughout, Nadal was close to taking a two-set lead. Before that match, the Spaniard was 205-2 when winning the first two sets. So with a 6/3 lead in the second-set tie-break, it appeared the top seed was on the verge of taking an insurmountable lead. But a double fault changed the trajectory of the match, allowing Del Potro right back into the clash.

“Of course I was worried when I lost the second set. Winning 6/3 in the tie-break, it's true that he played two great points with his serve, but then I made a very important mistake. That double fault was a big mistake,” Nadal said. “Then the match changed.”

Del Potro would ride his forehand to a two-sets-to-one lead, forcing Nadal to dig deep. And that’s exactly what the Spaniard did.

“He played well. I believe I increased a little bit the level in the fourth and the fifth. But the fifth, he was playing huge. It was so difficult to stop him,” Nadal said. “I am very happy the way that I survived a lot of important points in that fifth set.” 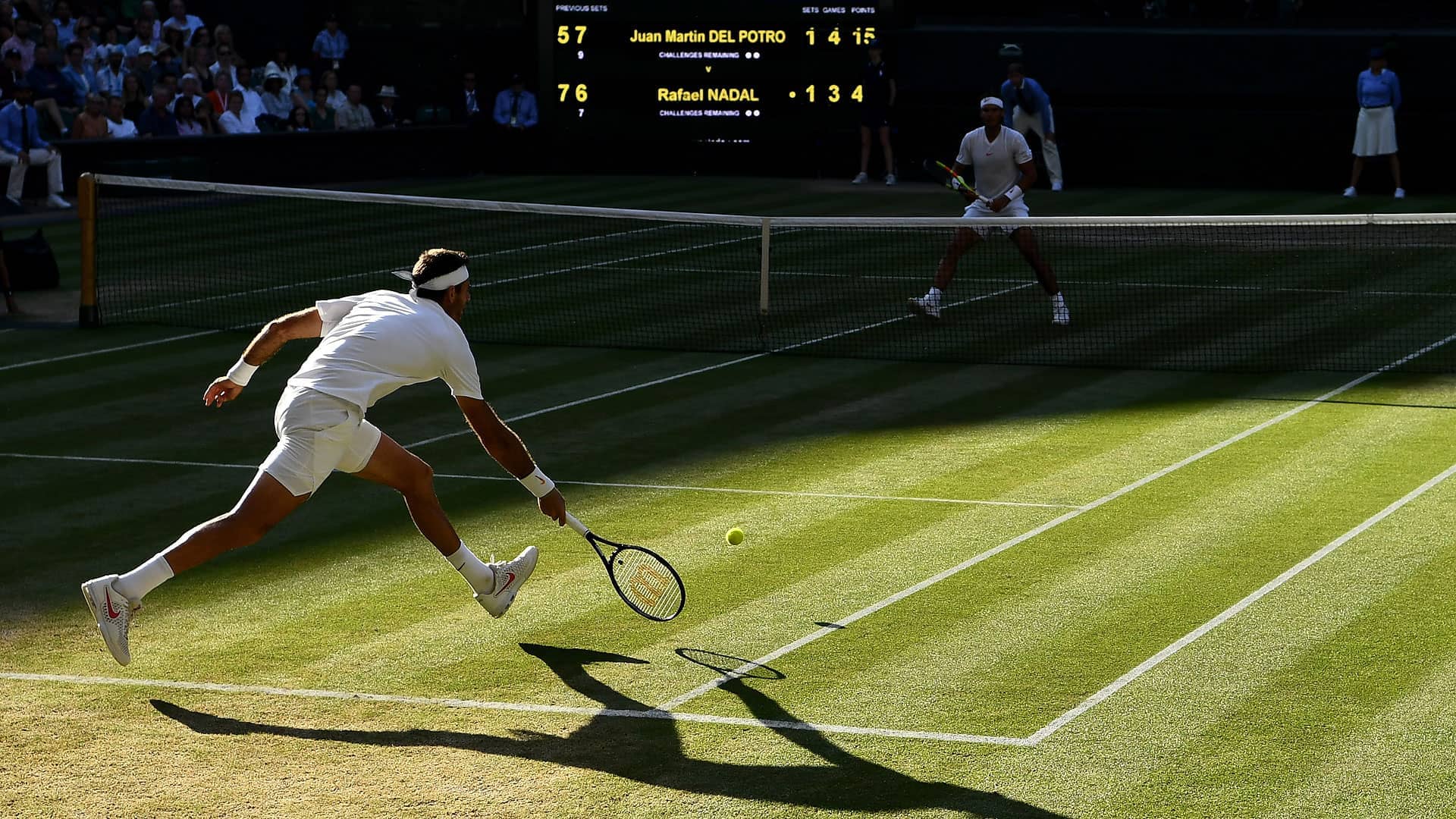 Two-time former Wimbledon champion Andy Murray was commentating on the match for the BBC, and even he was in awe of the quality of tennis.

“This fifth set is one of the best sets of tennis I’ve ever seen live,” Murray said.

Del Potro gave himself plenty of chances in the fifth set, earning five break points thanks to his massive forehand and even more courageous effort, showing he was unafraid of diving across the historic grass when needed.

But Nadal was undeterred, throwing in a serve and volley on his first match point, dashing in to put away a backhand volley, turning around and lifting both arms straight in the air after sealing his triumph. On the other side of the court, the Argentine was left lying still, stomach down, on the court after stumbling in his chase after the ball. Exhaustion. Disappointment. All of those feelings hit Del Potro, and understandably so.

Nadal would step over the net and come to embrace the ‘Tower of Tandil’. As is the case in many epic matches, both players deserved to win. But only the Spaniard could move on.

“At the moment I'm feeling sad after almost five hours of running and playing this high level against the No. 1 in the world, and I lost. It's not good for me. But maybe tomorrow or after tomorrow when I get home and I watch the match or some points again, I will be glad with my level, with my style of game,” Del Potro said. “I think Rafa in the end deserves to win once again.”

Explore the rest of ATPWorldTour.com's Best of 2018 series