Rafael Nadal and Dominic Thiem met in their first Grand Slam final against one another at Roland Garros this year.

Continuing our Season In Review series, ATPWorldTour.com revisits the fiercest rivalries of 2018. Today we feature Rafael Nadal vs Dominic Thiem:

Four years ago, Rafael Nadal played Dominic Thiem, who was 20 years old, for the first time. Nadal beat the Austrian at Roland Garros in two hours and five minutes with the loss of just seven games en route to lifting his ninth Coupe des Mousquetaires in 10 years. But the Spaniard certainly noticed the talent in front of him.

Nadal would win five of his first seven FedEx ATP Head2Head meetings against Thiem, who was proving himself one of the best clay-court players in the world. But in 2018, the pair’s rivalry ascended to a new level.

Nadal and Thiem clashed four times, including in the Roland Garros final and the US Open quarter-finals, one of the year’s best matches. Both Top 10 players in the ATP Rankings, the duo contested some of the highest-quality clashes of the season.

But perhaps that was hard to foresee when they met for the first time in 2018 at the Rolex Monte-Carlo Masters. There, Nadal dismantled Thiem in 68 minutes with the loss of just two games, the most lopsided match of their rivalry. The eventual champion lost just six service points and broke serve five times.

“That is not a normal result against a player [like Dominic]," Nadal said. "He's one of the best players of the world, especially on clay."

The Austrian beat Nadal in straight sets in the quarter-finals of the Mutua Madrid Open. Thiem would go on to reach his second ATP World Tour Masters 1000 final at that event.

“I had to really increase my level compared to Monte-Carlo to beat Rafa here," Thiem said. "He's in really great form. He won 21 matches on clay and 50 sets. This is amazing. So I had to play an extraordinary match, and that's what I did."

While Thiem is known to sometimes drop way back in the court, he stayed right in on the baseline to take time away from Nadal and control play.

The stakes would get even higher at Roland Garros, where Thiem advanced to his first Grand Slam final. But once again, Nadal was across the net. And this time, the Spaniard asserted his dominance on the terre battue, winning the title in Paris for the 11th time in the pair’s biggest match to date.

“When you start the clay-court season that Dominic, he's one of these players that has a chance to win every tournament that he's playing, and maybe even more here in Roland Garros because he's strong physically," Nadal said.

That was their 10th match, and all of those had come on clay. 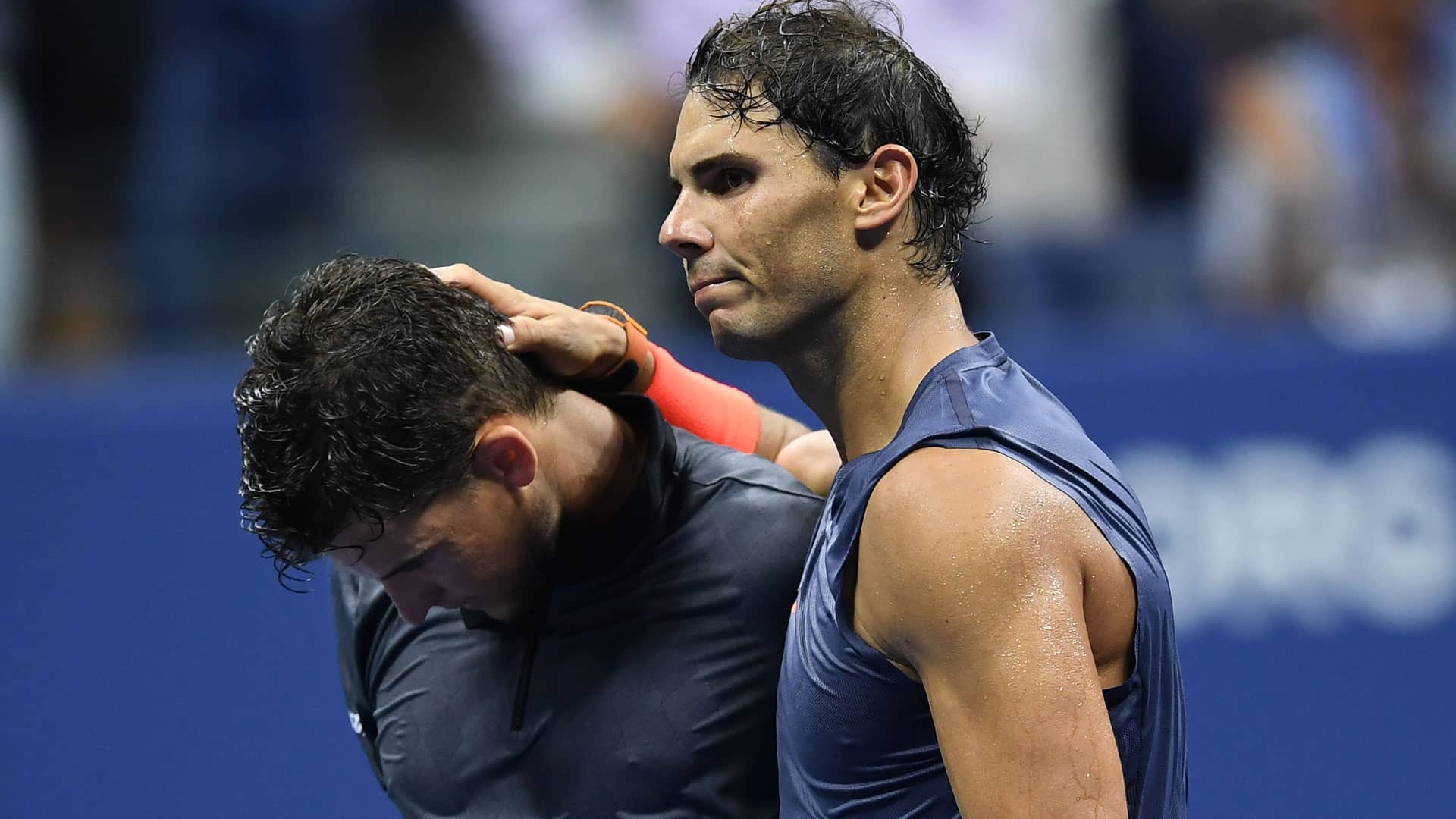 But Nadal and Thiem saved the best clash of their rivalry, to date, for last. Thiem served Nadal the Spaniard's first bagel at the US Open in 14 years in the quarter-finals, ripping shot after shot from the first point of the match to stun the favourite early. But the top seed eventually battled back for an epic five-set victory, finishing it off in a deciding-set tie-break. Thiem threw all his weapons at Nadal, blasting balls throughout the match. But the left-hander outlasted Thiem in four hours and 49 minutes.

“It's going to be stuck in my mind forever. Forever I'm going to remember this match, for sure,” Thiem said. “It's cruel sometimes, tennis, because I think this match didn't really deserve a loser."

The match showed exactly how enthralling this rivalry could be with both men at their best. They might be the two biggest ball-strikers on the ATP World Tour, putting everything they have into every shot like in a heavyweight championship boxing match.

For every heavy topspin cross-court forehand from Nadal, Thiem answered back with a big cut on his one-handed backhand. And for every time Nadal tried to take his two-handed backhand early and launch it flat like it was coming out of a cannon, Thiem was there to counter with a bigger blow off his forehand.

Their US Open clash was a perfect way to showcase one of the sport’s great budding rivalries. And based on the result, with the match going the distance, it’s safe to say that fans have plenty more to look forward to between Nadal and Thiem in 2019 and beyond.