Dominic Thiem and Stefanos Tsitsipas met on five occasions in 2018.

Rivalries Of 2018: Thiem vs. Tsitsipas

Continuing our Season In Review series, ATPWorldTour.com revisits the fiercest rivalries of 2018. Today we feature Dominic Thiem vs. Stefanos Tsitsipas:

In 2018, no rivalry was more prevalent than Dominic Thiem vs. Stefanos Tsitsipas. A battle of two of the more potent one-handed backhands in today's game, the attack-minded stars clashed a total of five times, leading all FedEx ATP Head2Head match-ups.

Regardless of where they met - on clay or hard, in Europe or North America, the early rounds or latter stages - Thiem and Tsitsipas raised their levels for this budding rivalry. Starting with a season-opening encounter in Doha and concluding with a critical meeting in Toronto in August, they would clash at all three ATP World Tour levels (250, 500 and Masters 1000), as well as the second Grand Slam of the year at Roland Garros.

Coming into the season, the World No. 8 Austrian had never lost to a teenager at the tour-level, while a 19-year-old Tsitsipas had registered just one win over a Top 10 opponent.

It was a breakthrough campaign for Tsitsipas, as the 20-year-old Greek made great strides en route to Most Improved Player of the Year honours in the ATP Awards presented by Moët & Chandon. And it all started at the Qatar ExxonMobil Open. There, he streaked to his second straight ATP World Tour quarter-final as a qualifier, carrying the momentum from a deep run in Antwerp just a few months prior. 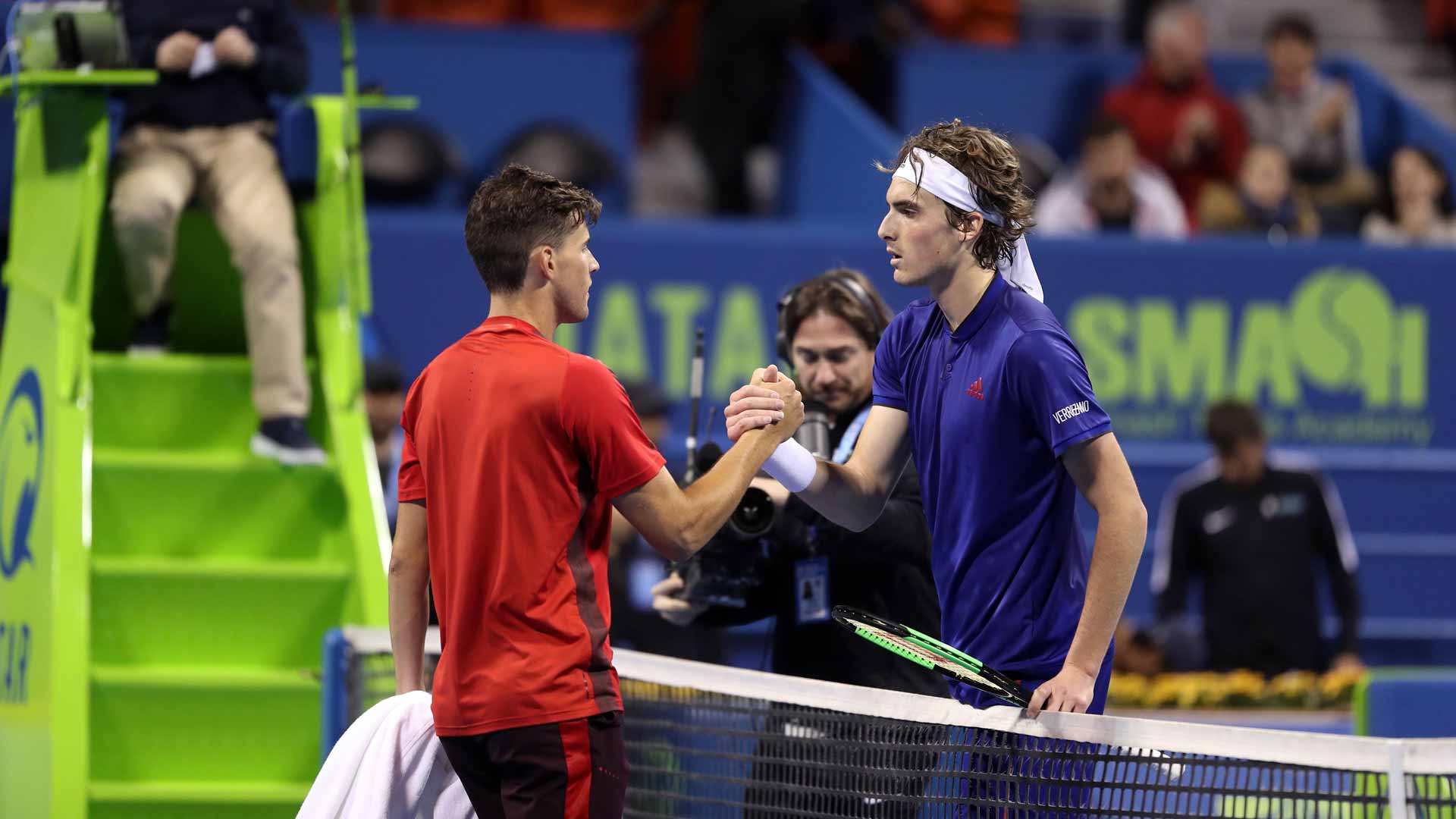 Sitting at No. 91 in the ATP Rankings, Tsitsipas made an immediate statement in Doha, but he would encounter a reality check against a fifth-ranked Thiem. The top seed surged to a 7-5, 6-4 victory, turning in an efficient serving performance behind six of seven break points saved. But despite the loss, Tsitsipas made a strong impression on his counterpart.

“He's already so good at a young age. I think he's going to be for sure a top player in the near future,” Thiem said. “He's playing very well, aggressive with a good service, nice one-handed backhand.”

After taking their first encounter, Thiem would also emerge victorious at the BNP Paribas Open in March. The fireworks flew in an opening-round meeting at the first ATP World Tour Masters 1000 event of the year. On a packed Court 1 in Indian Wells, the Austrian battled to a 6-2, 3-6, 6-3 win in one hour and 51 minutes.

As he did in Doha, Tsitsipas put up a valiant fight under the searing Southern California sun. His charge towards the year-end Top 20 was well underway and his growth and maturation would benefit from every elite encounter. In search of his first Top 10 win of the season, he would meet Thiem once again just six weeks later at the Barcelona Open Banc Sabadell.

The budding rivalry shifted to clay and the surface change would prove critical for Tsitsipas. The Greek found a second home in the Spanish metropolis, not dropping a set en route to his first ATP World Tour final. After blitzing Corentin Moutet, Diego Schwartzman and Albert Ramos-Vinolas, he would topple Thiem in the quarter-finals.

The rout was on, as Tsitsipas breezed to a 6-3, 6-2 win in just 80 minutes. Thiem, who consistently played deep behind the baseline, was unable to secure a third straight win against his new rival. He suffered his first defeat to a teenager at the tour-level.

One day later, Tsitsipas would become the first Greek to reach an ATP World Tour final since Nicholas Kalogeropoulos in 1973, before falling to Rafael Nadal in the championship. His run in Barcelona would see him break into the Top 50 of the ATP Rankings for the first time.

If it seemed like Thiem and Tsitsipas were meeting nearly every month, that's because they were. As the calendar flipped to May, the 25-year-old was finding his top form on the dirt. A runner-up finish at the Mutua Madrid Open (l. to Zverev) was followed by a 10th tour-level title in Lyon, and he would surge into Roland Garros with a bevy of momentum at his back.

The second Grand Slam of the year would become a revenge tour for Thiem, as he defeated Tsitsipas in the second round and Madrid champ Alexander Zverev in the quarter-finals. After suffering such a decisive defeat to the Greek teen in Barcelona, he would not endure the same fate in Paris. Thiem prevailed 6-2, 2-6, 6-4, 6-4, en route to his maiden major final.

At first glance, it may appear to be a straightforward four-set affair, but the two-day encounter carried plenty of drama. Thiem would use his experience to stop the surge after Tsitsipas took the second set. And the Austrian would be forced to take a two-sets-to-one lead to sleep as the match was suspended due to darkness. The next day, Thiem dropped just one service point to close it out. His victory over Tsitsipas was followed by signature wins over Kei Nishikori, Zverev and a surging Marco Cecchinato before falling to Nadal in the title match.

The best tournament of Thiem's career had him on the rise as he entered the summer hard-court season. But his transition from the clay wasn't a swift one, especially with Tsitsipas standing on the other side of the net to open his Rogers Cup campaign.

This time, it was the Greek's turn to defeat his rival en route to a breakthrough week. He ousted Thiem 6-3, 7-6(6) in a Toronto tussle, needing one hour and 21 minutes to triumph. The win would continue Tsitsipas' stunning run to the final, his first at the ATP World Tour Masters 1000 level. In addition, it was his first of four straight Top 10 victories, having followed that up with wins over Novak Djokovic, Zverev and Kevin Anderson. He became the youngest player to defeat four Top 10 players in a single tournament since the ATP World Tour was established in 1990.

Both players would go on to finish inside the Top 20 of the year-end ATP Rankings, with Thiem peaking at No. 8 after appearing in the Nitto ATP Finals and Tsitsipas at No. 15 following a title at the Next Gen ATP Finals. The #NextGenATP star also raised his maiden ATP World Tour trophy in Stockholm. After five pivotal clashes in 2018, expect the pair to take their new rivalry to the next level in 2019.