The Biggest Grand Slam Upsets Of 2019

5) Pierre-Hugues Herbert d. Daniil Medvedev, Roland Garros First Round, Paris, France, 27 May 2019 (Match Stats)
Daniil Medvedev had won eight of his first 10 matches on European clay this year, but two straight opening-round exits leading into Roland Garros meant the Russian, who later in the season would rip through the North American hard-court swing, was vulnerable for an upset. Pierre-Hugues Herbert, who’d turned his back on doubles in favour of singles competition after completing the career doubles Grand Slam with Nicolas Mahut at the Australian Open in January, was primed for the biggest win of his career on the second day in Paris.

Riding on the crest of a wave and buoyed by his French supporters, 28-year-old Herbert recovered from two-sets-to-love down and broke Medvedev in the penultimate game en route to his seventh tour-level victory against a player in the Top 20 of the ATP Rankings (7-24 lifetime). Falling to the ground in celebration, Herbert rightly savoured his 4-6, 4-6, 6-3, 6-2, 7-5 win over No. 12 seed Medvedev in three hours and 54 minutes on Court 14.

“It was one of the best, for sure,” said Herbert. “Maybe, emotion-wise, maybe the best, yes. The atmosphere was incredible… The crowd was incredible, [a] very precious help. I used the crowd. They pushed me in difficult moments. When you're two sets down, it's very difficult. It's in part thanks to the crowd that I was able to win today.” Herbert lost 6-2, 6-2, 5-7, 6-7(6), 11-9 in the second round to fellow Frenchman Benoit Paire. 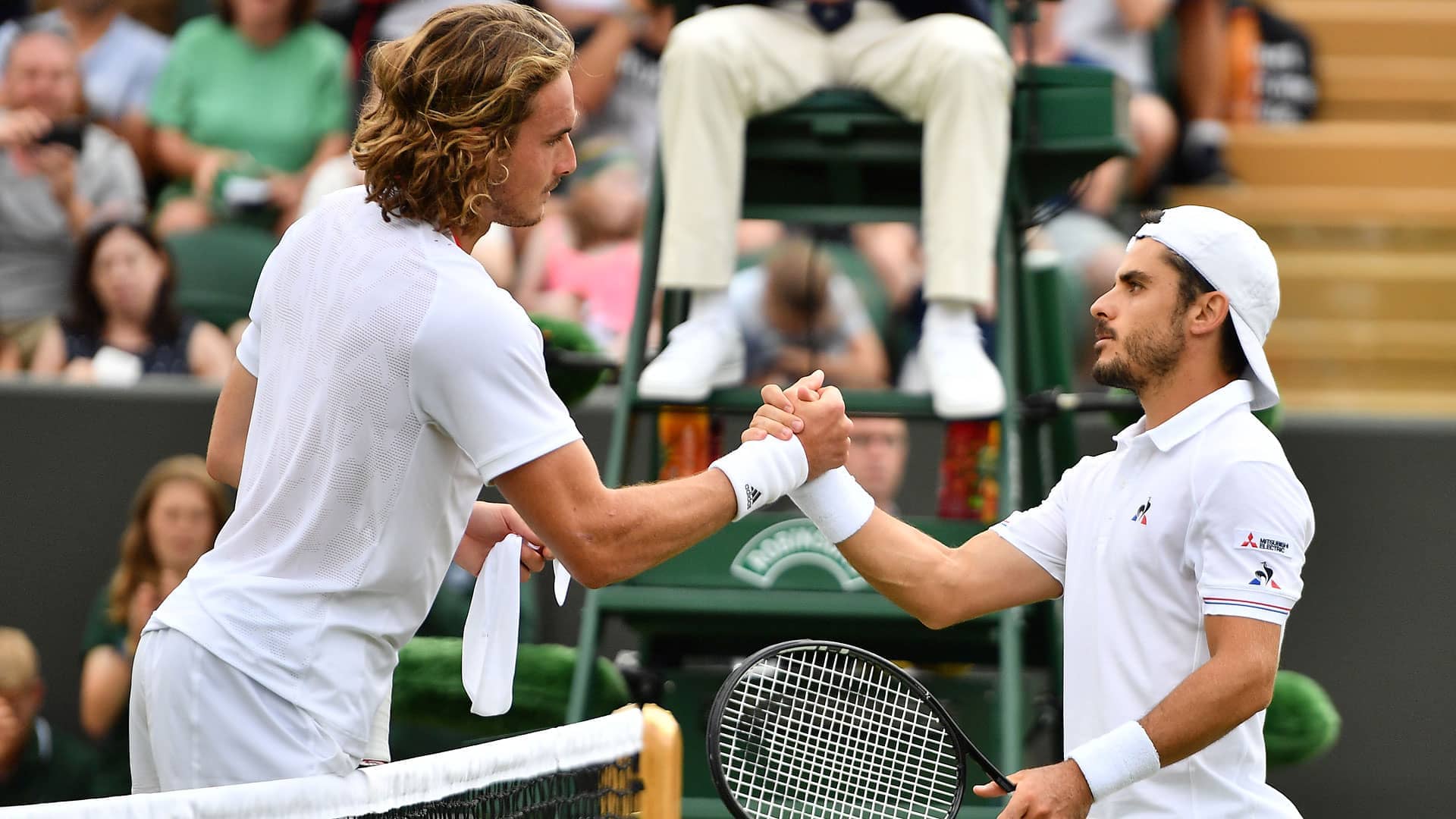 4) Thomas Fabbiano d. Stefanos Tsitsipas, Wimbledon First Round, London, England, 1 July 2019 (Match Stats)
Stefanos Tsitsipas needed just over 90 minutes to beat Thomas Fabbiano in the 2018 Wimbledon third round, but what a difference a year makes. Fabbiano, who’d never won a set against a Top 20 opponent, sprung a stunning upset on day one at the All England Club, when the Italian showed no fear in a 6-4, 3-6, 6-4, 6-7(8), 6-3 win over sixth seed Tsitsipas in three hours and 22 minutes.

Tsitsipas, who let slip two match points at 6/7 and 7/8 in the fourth-set tie-break, looked set to rally in the decider on No. 2 Court, but instead of getting down on himself, Fabbiano remained calm, saving three break points in his first service game of the fifth set. Then from 2-3 down, the World No. 89 won the final four games of the match, breaking Tsitsipas' serve twice, to move to 4-0 in fifth-set matches.

Greek Tsitsipas was scathing of his own performance, admitting, "People expected things from me. I didn't deliver. When you get so much support, so much energy, so much positivity from everyone, and just ruin everything by yourself, it's devastating… Last year his forehand was not the same. He improved a lot on his forehand. It's very uncomfortable. You basically have to guess where he's going to play. Last year was kind of easy, the easiest victory I had in Wimbledon. I played unbelievable in that match. Somehow, I didn't manage to get even close to that level that I played last year. I just saw a more improved, more solid player than he was last year."

3) Grigor Dimitrov d. Roger Federer, US Open Quarter-finals, New York City, United States, 4 September 2019 (Match Stats)
Grigor Dimitrov arrived at the US Open mired in one of the deepest slumps of his career, losing seven of his eight matches leading into the season’s final major. But the World No. 78 started to find his groove at Flushing Meadows and broke a seven-match losing streak against Roger Federer by coming back from two sets to one down to shock the five-time former champion  3-6, 6-4, 3-6, 6-4, 6-2 for a place in the semi-finals.

"I think the past six, seven months have been pretty rough for me,” said Dimitrov, who’d won just two of 18 sets in previous matches against Federer. “But I had somebody to lean on, my friends, my family. I kept on believing again in the work, the rehab I had to put behind my shoulder, the exercise, the practice, fixing up the racquet a little bit. There were so many things I had to adjust in such a small but big period of time. Next thing you know, you're almost [at the] end of the year, you have a result like that. It's pretty special to me." With victory in three hours and 45 minutes, Dimitrov became the lowest-ranked Grand Slam semi-finalist since Rainer Schuettler did so as World No. 94 at Wimbledon 11 years ago.

Federer started brightly to take a 3-0 lead, but Dimitrov made his key breakthrough when he broke for 4-2 in the second set. Federer broke twice in the third set to capture the momentum, but like in the second set, he was unable to get off to a quick start in the fourth, and that proved costly. After Dimitrov forced a decider, Federer left the court for a medical timeout as the Bulgarian did push-ups on his bench to stay warm. Dimitrov raced to a double break and 4-0 lead in the fifth set as Federer continued to make unforced errors, struggling to find a surge of energy. And finally, after holding to love, Dimitrov put his hands on his head and let out a massive roar after securing the win. 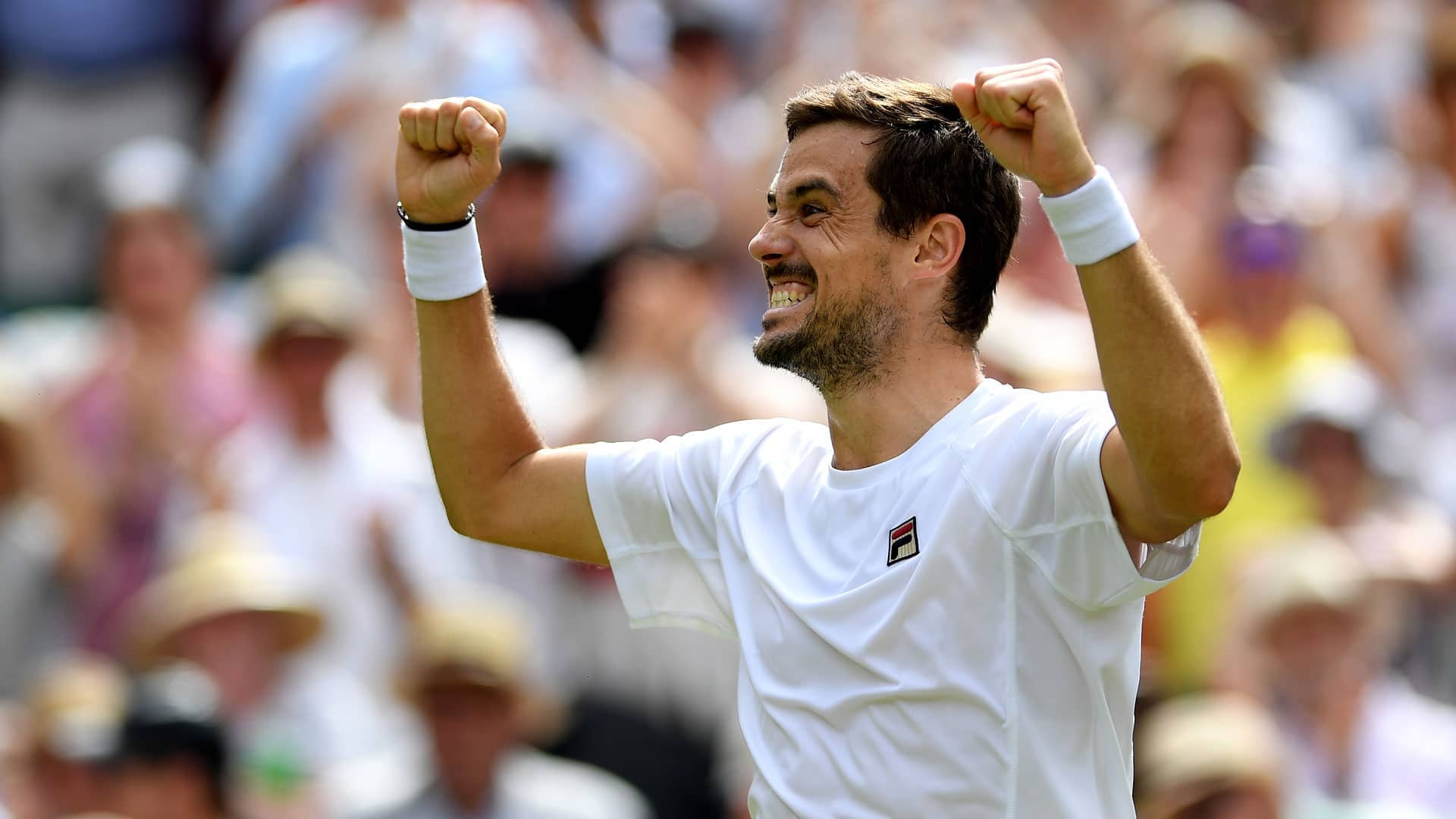 2) Guido Pella d. Milos Raonic, Wimbledon Fourth Round, London, England, 8 July 2019 (Match Stats)
On mown lawns, Milos Raonic’s senses always heighten and, this season, memories of a right knee injury that saw him miss the entire spring European clay-court swing, began to subside as he entered the Wimbledon fourth round with a 10-2 record on grass. The draw was opening up after Guido Pella beat the 2018 finalist and fourth seed Kevin Anderson in the third round, and fans pondered whether Raonic may make another deep run, as he did to the 2016 final. But Pella, who’d also upset former finalist Marin Cilic in the 2017 second round, had other ideas on No. 3 Court.

Through two sets, No. 15 seed Raonic didn’t face a break point and served for the match at 5-3 in the fourth set against Pella, who at the time was tied with Rafael Nadal with a tour-leading 21 clay-court match wins in 2019. But No. 26 seed Pella started to find his range with deep returns against the net-rushing Canadian and pulled away in the fourth set tie-break prior to Raonic erasing three match points while serving in the fifth set – 4-5, Ad Out; 5-6, 15/40. Pella eventually broke through for a 3-6, 4-6, 6-3, 7-6(3), 8-6 victory when the Canadian sliced a backhand volley into the net to end the three-hour and 42-minute encounter.

“When I lost the third match point I wanted to cry,” said Pella, who’d never before advanced past the third round of a Grand Slam championship. “He was serving so good in those points that I couldn't do anything. But I think I kept playing, kept fighting for every ball.”

It was the first time that Raonic had lost a match after winning the first two sets. The Canadian, who hit 80 winners, including 33 aces, and won 74 of 110 points at the net, said, "I wasn't efficient and wasn't able to play the way I needed to. He started getting in more points and I had to find a way to create like I did early on in the match." 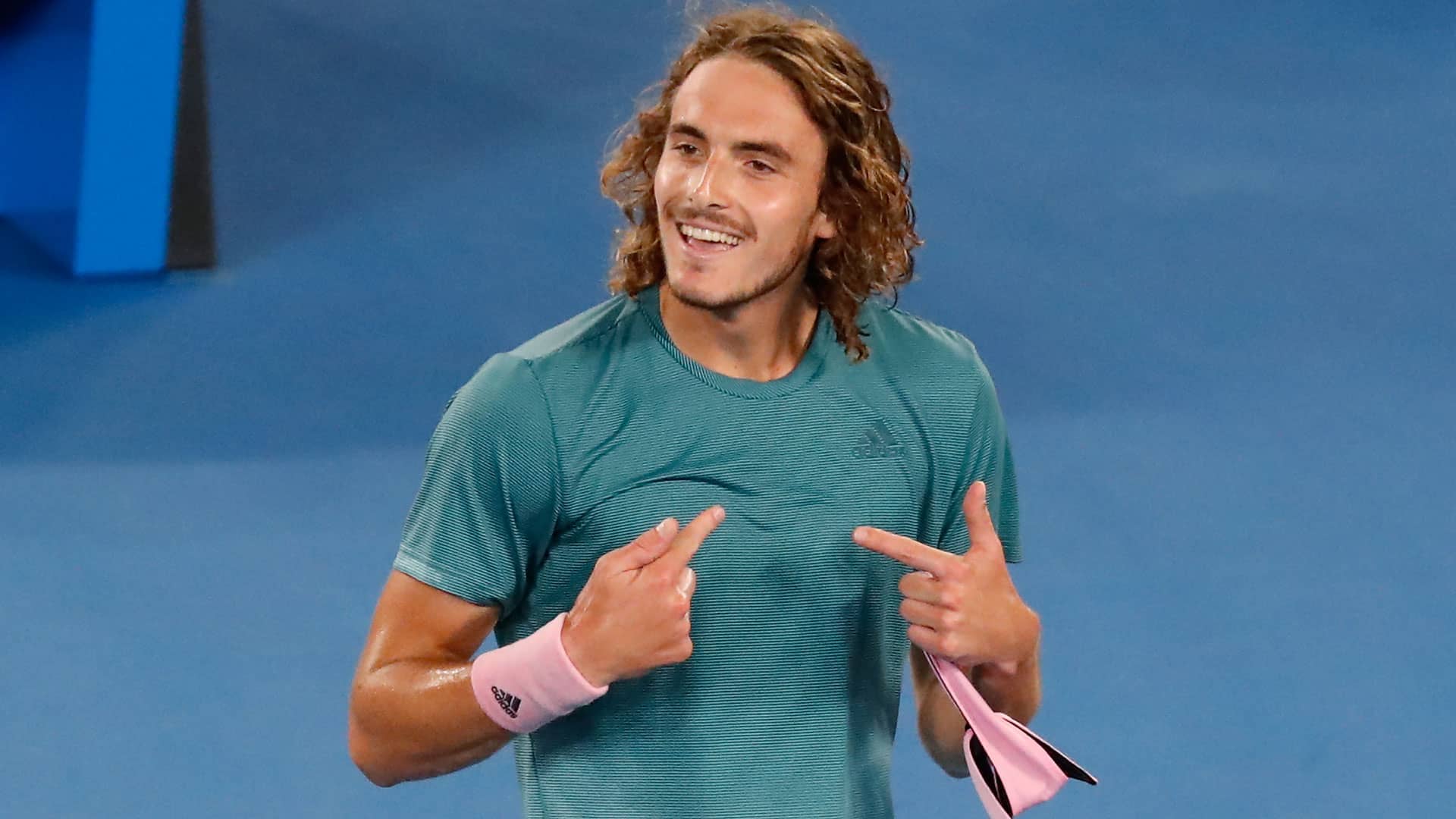 Serving at 6-7(11), 4-5, Tsitsipas saved four set points and won the final four points of the second-set tie-break to even the match. The Greek, who’d won the Next Gen ATP Finals crown just two months earlier, had to bide his time before netting his first break points in the third set after two hours and 54 minutes of play. Once Tsitsipas received a quick massage of the thighs, to relieve cramp, after five games of the fourth set, he found his groove and while Federer forced a tie-break at 5/5, Tsitsipas struck a forehand winner en route to the best day of his career (to date).

“I have massive regrets tonight... I felt like I had to win the second set,” said Federer, who failed to convert any of his 12 break point opportunities. “I don't care how I do it, but I had to do it.”

Tsitsipas, who struck 20 aces en route to becoming the youngest Australian Open quarter-finalist since Nick Kyrgios in 2015, admitted, “It was a very emotional moment. It was a beginning of something really big. I felt joy. I felt happiness. I felt a huge relief going out of my shoulders. That moment is definitely something that I will never, ever, ever forget. This match point is going to stay, I'm pretty much sure, forever, for the rest of my life."