Nick Bollettieri, who has worked as a pioneering visionary for six decades, is celebrating his 90th birthday.

James BuddellChief Writer
This article contains:
ATPTour.com pays tribute to a coaching pioneer, with exclusive insight from some of his former pupils

Nick Bollettieri never set out to revolutionise the way tennis was coached, let alone become world famous. But over the course of the past six decades, the charismatic former American football player-turned paratrooper, who today celebrates his 90th birthday, never stopped learning about the sport. Be it from his time in Coral Gables and onto Victory Park in North Miami Beach; from Synder Park in Springfield, Ohio, the Port Washington Tennis Academy to the Dorado Beach Resort in Puerto Rico and Beaver Dam, Wisconsin; then The Colony Beach & Tennis Resort, located in Sarasota, and onto an old tomato field in Bradenton, Florida, his home of the past 40 years.

Initially considering tennis a “sissy sport”, Bollettieri translated the discipline and dedication required to jump out of an aeroplane in the 187th Airborne Division of the US Army into leadership as a visionary, identifying the need to train talented junior players in a deliberate process. “It’s about hitting hundreds of tennis balls for four or five hours daily, of squeezing schoolwork between training sessions, of spending three or four weekends each month at tournaments,” Bollettieri exclusively told ATPTour.com. “Paying the price to be a winner. Nothing is going to come by accident. If it does, it’s a one-time victory. Success is about blood, sweat, tears, frustration and the determination to achieve it.”

With the help of Julio Moros, Steve Owens, Sammy Aviles, Chip Brookers, David Brewer and Mike De Palmer Sr., to name but a few coaches, Bollettieri took the sport out of country clubs and public courts, and away from the traditional college route and onto the pro tours. He went about fast-tracking thousands of aspiring professional athletes in the first full live-in, training programme at the Nick Bollettieri Tennis Academy (now-named IMG Academy), which first opened its doors in November 1981, courtesy of a $1.8 million loan from Louis Marx, owner of Marx Toys. “You cannot do it yourself and you have to have a team,” said Bollettieri. “If I had given thought about what I did, I would never be where I am. I just did it. Most people think too much. Don’t ever be ashamed to say I am nervous. When I did my first jump, this little private asked ‘How I was feeling?’ I said, ‘I’ve got a diaper on, I am so nervous!’ But I found a way to get over my nerves to do it. It’s a part of life.”

With custom-fit technical and strategic advice for every player, Bollettieri and his band of loyal coaches, physical trainers and sports psychologists helped to develop the likes of Carling Bassett and Jimmy Arias, Andre Agassi and Jim Courier, Monica Seles and Maria Sharapova through daily drills and competition. Arias recently told ATPTour.com, “Bollettieri was about, here’s a can of balls, 30 guys who are really good, and let’s beat everyone’s brains in every day.” Ten World No. 1s — and countless Top 10 tennis talent — made an initial 12-acre site in Bradenton, Florida, their training base. Following a $7 million takeover in 1987, the Academy subsequently expanded through IMG’s Mark McCormack and Bob Kain and today it now caters for high-performance athletes across eight sports in more than 500 acres.

Courier, whose mother wrote to Bollettieri asking for him to change her son’s baseball grip on his backhand during his four-year stay at the Academy, told ATPTour.com, “Nick provided a unique professional environment at his revolutionary academy for amateurs like myself that accelerated our path, taught us discipline and structure. The Academy gave us best in class technical, conditioning and mental coaching for the rigors ahead and the daily competition simply did not exist anywhere else in the world. These skills not only helped people like me achieve my dreams in sport but also translated to success in the business world for so many students as well.” 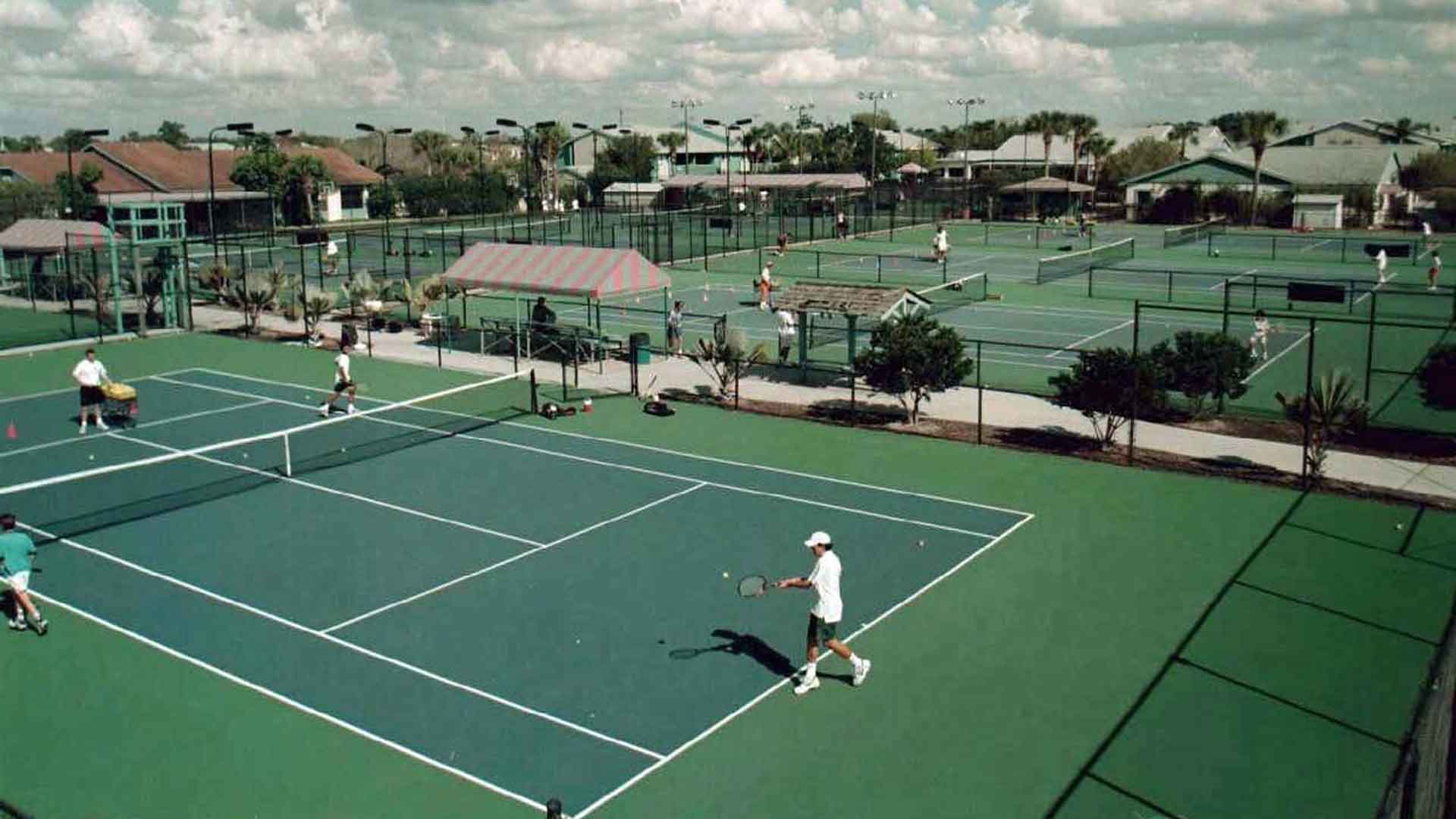 Getting to Stadium Court was always the ultimate goal at the Nick Bollettieri Tennis Academy. After returning from four hours tuition at one of two nearby schools, the students would find Bollettieri bare-backed and thinking about his tan, wearing wrap-around sunglasses and feeding balls in a constant state of motion. He expected his elite charges to deliver, to shine. There was a different energy when he was around as each player wanted (and needed) to impress the coach they respected the most. When asked what he looked for in a student, Bollettieri, who fed, housed and coached many of the students out of his own pocket, told ATPTour.com, “What they do without saying one word. Their attitude, their determination and also athleticism. Foot speed is also important. I don’t look at the grips, but I look at what they do to make them a little bit better most of the time.”

Of course it was Arias’ whipped forehand, which Bollettieri first witnessed at The Colony in November 1977, that became the blueprint for the way he — and his coaches — taught the stroke in the future. “On that first day, Mike DePalmer Jr. and I were hitting for 15 minutes then Nick came out and started feeding me balls. He fed, but he had someone taking balls out of the basket and handing them to him! I got off the court and I said to my Dad, who is from Spain, ‘What do you think?’ And my Dad said, ‘That’s the stupidest thing I’ve ever heard in my life. How can you swing full speed and then stop?’ He wanted the racquet in motion. I was hitting the way everyone is hitting now. They didn’t realise I would be able to swing hard under pressure and lots of people told me I couldn’t make it. That’s why Nick ran out to feed me forehands and he said to his coaches, ‘That’s the Bollettieri forehand!’ But it was mine, well the ‘Tony Arias forehand’. So Nick started teaching that.”

While the cost of attending the Academy amounted to $1,500 per month in the 1980s, coaches made peanut butter and jelly sandwiches and chips for lunch, prior to track, gym and tennis work until 5:30pm. “Cook would prepare dinner at the 20-room motel – often spaghetti and steak, then it would be clean-up, homework and room checks,” recalls Bollettieri. “When the chef had Sundays off, bacon and scrambled eggs would be prepared in a big frying pan. Dinner would be KFC or pizza. There were picnic tables in the driveway and the children ate in shifts.” The 1,200 square-metre swimming pool soon needed to be filled in, and a structure built for a study hall, while Carling’s father, John Bassett, provided buses to ferry everyone around. Younger players regularly squared off against older foes to foster a competitive atmosphere.

Aaron Krickstein, who followed Arias and broke into the Top 10 of the FedEx ATP Rankings as a 17-year-old, told ATPTour.com, “Nick was always a positive motivator and always devised game plans to take advantage of my opponent’s weaknesses. He was a fun guy to be around, we played cards and pool together. He was a positive influence, but at the same token, he was a no-nonsense guy and wanted to get the best out of his students. Nick could get into the mind of a student and did that very well.”

There was plenty of high jinx too among the 300 students. David Wheaton, who was invited to the Academy in January 1985 and joined Andre Agassi, Courier and Martin Blackman in a training group, told ATPTour.com of one notable incident. “Andre had worn denim jeans at a tournament in northern Florida, so when he came home Nick set up a disciplinary committee with students on the bleachers,” said Wheaton, who moved down with his family to attend the Academy in 1985. “It was 12:30pm and Andre was in the dormitory beside stadium court. He stepped out and said, ‘What time’s my lesson? Nick had been on court since 6am in the morning and Andre said, ‘Don’t forget I have a hair appointment at 2:30pm!’”

Agassi remained a perennial favourite and Bollettieri sat in the players’ box on Centre Court when the Las Vegan captured the 1992 Wimbledon title — the ultimate Academy promotion. There was a two-year stint as a touring coach to Boris Becker, while Bollettieri continued to evolve and help the likes of Yannick Noah, Mary Pierce, Venus and Serena Williams, Marcelo Rios, Martina Hingis, Anna Kournikova, Tommy Haas, Jelena Jankovic, Max Mirnyi and Kei Nishikori.

Bollettieri only realised he had become famous when “One time at the US Open, I arrived at the front door and by the time my manager and I got through I had signed 300 autographs." Not bad for a New Yorker, born to immigrant Italian parents, who dropped out of the University of Miami law school after five months and took up tennis coaching for $3 per hour, while the first of his eight wives travelled around the city to pick up tips from rival instructors.

Brian Gottfried, Bollettieri’s first success story from their first meeting in Springfield in 1961, told ATPTour.com, “He was a great promoter, an electric personality and a great motivator, so I didn’t really think or know about his future. I knew what he did for me. He was a strong disciplinarian for one, but I related to him well because I liked the discipline. His motivational and technical skills were very good. You may say he didn’t have much of a playing history before that time, but he was a great learner and imitator and watcher. His heart is his biggest asset, I don’t know how his heart fits in his body. He never charged me a penny.”

When asked about his three biggest influences in more than 60 years of teaching the sport, Bollettieri told ATPTour.com, “My parents always gave me the courage to try things. To be in the paratroopers that wanted to be the best of the best, and the famous football coach Vince Lombardi, who got me started with my first camps in 1968 at Beaver Dam, Wisconsin, which became the biggest summer camps in the world and sowed the seeds for what became the Nick Bollettieri Tennis Academy.”

Today, as he celebrates his 90th birthday, Bollettieri will rise at 5:30am to undertake his daily stretches, sit-ups, press-ups and lift light weights. He will then patrol the IMG Academy with the same level of enthusiasm and dedication to tennis that he helped revolutionise as a pioneer, safe in the knowledge that his holistic training model has become the standard for academic, athletic and personal development of young athletes in every major tennis city in the world. His legacy, too, is one of generosity and that the life lessons he provided are remembered by his former students to this day.