This is Dante Bottini's first trip working with Grigor Dimitrov.

Bottini On Dimitrov: 'The Things He Can Do Are Unbelievable'

Grigor Dimitrov has long enjoyed success at the Australian Open, where he is into the quarter-finals for the fourth time. The 2017 semi-finalist will try to return to the last four again when he faces Russian qualifier Aslan Karatsev on Tuesday.

The Bulgarian recently started working with a new coach, Dante Bottini, the former longtime mentor of Kei Nishikori. ATPTour.com caught up with Bottini about their quick start, what it has been like getting to know Dimitrov and how he coached the 2017 Nitto ATP Finals champion from hard quarantine.

Grigor said he called you late last year when he heard you were free and he got the sense that you hit it off right away, and not just on the court. Did you realise that, too?
I saw that right away. He called me in November and said he wanted to meet with me. I spent three full days with him in Monaco. We talked a lot about life, about tennis, about how I see tennis and his tennis. We hit it off really, really well from the beginning. He was happy and then he called after a few days and said he would like to start training with me. That was a good meeting.

Because you’ve been on Tour for so long and Kei played Grigor so many times, did you have an idea right away of what you wanted to do with Grigor’s game?
For sure. Kei played so many times against him and we practised also during all these years. They played doubles together, so I knew very well how Grigor plays. I never saw him in detail in practice that much. I knew his potential, but to tell you the truth he surprised me that it’s even better. He’s unbelievably talented. The things that he can do on the court are unbelievable. I have in mind things I want him to get better with and things I want to work with him on. We’ve shared information with each other and we’ve been doing well so far.

When you speak about how talented Grigor is, what’s something you see from him in practice that shows that?
He makes things that are difficult very easy. It is the shots that he makes and how easy he can process when he does something wrong and how easily he can fix it. I’m not saying it’s just the amazing shots he hits, but how easy he processes the mistakes that he makes to get better. If I ask him to do something, he does it right away instead of practising it for a few days or even weeks before he gets it.

You spent many years working with Kei. How different does it feel coaching a different player?
Every player is different. I worked with Kei for so long that you get used to the player a little bit. But I’ve also trained so many other people in my life and I know that everybody is different. You have to adjust. That’s the way that I coach. It’s not my way or the highway. I always try to see the player I have in front of me and you adjust your work and how the person is. So far it’s been working really well.

Grigor is 29 and you might think as he gets older it would be harder to make changes. But how do you think he is able to pick up changes quickly?
When you get older, it’s tougher to accept that, too. But everybody, including the top players, go through changes. Tennis is changing. It’s an evolution. So you have to adapt and change a few things. I’m not saying that he’s changing drastically, but just a few things and obviously he’s willing to do that.

Is there anything you’d be willing to share that you believe Grigor can improve?
I think the most important [element] for Grigor is to stay mentally focused and to stay in the point longer. He needs to trust his physical conditioning — which is great — his speed, his ability to move. We all know that he has all the shots. For me, it’s very important for him to stay calm and realise that he has all the weapons to play. He doesn’t need to rush.

You May Also Like: Dimitrov Upsets Thiem At Australian Open

One of the things that Grigor takes pride in is his kindness and simply being a good person. How nice is that for you?
Super nice. I knew that he was a nice person, but I never knew him deeply like I have in these few months. He’s a super nice person, he cares about others and I like that about him. I think we both are pretty much the same in that sense. We get along good, we get along very well. He likes to talk a lot, he likes to ask the questions probably more than me. We’ve been having nice conversations… going for walks and talking about not only tennis, but about life. I think that’s important for him, it’s important for me, too.

You flew to Melbourne from Los Angeles and were mandated to do hard quarantine, but Grigor was on a different flight and was able to train. How tough was it to try to help Grigor while you were in the hotel?
I was in contact with him every day and I was telling him things that I wanted him to do and to practise and to keep going with the preseason we did in Monaco. I was talking to him and he was giving me his feedback and I was telling him whatever I could. I also was in contact with David Goffin’s coach, who was running the practices. I was telling him things I would like to do in practice and he helped me out, feeding Grigor some balls. I have to thank Germain Gigounon, Goffin’s coach, for that.

Did they take any videos for you to see what was going on?
Yes, I was asking Grigor to send me some videos from practice. They were not too long, but at least I could see him!

Sometimes it takes time for a player and coach to get used to working with each other. But right away Grigor is into a Grand Slam quarter-final. How do you, as a coach, decide how much advice you give him in such a big moment?
I’m the same as the first tournament that we played here and the first few rounds of the Australian Open. I’m not changing anything because it’s the quarter-finals or Round of 16 or first round. I don’t care. We just have to keep doing the same things we’ve been doing, same routine, keep playing the same way and then go day by day, match by match. I’m keeping things simple and exactly the same as we have been doing. 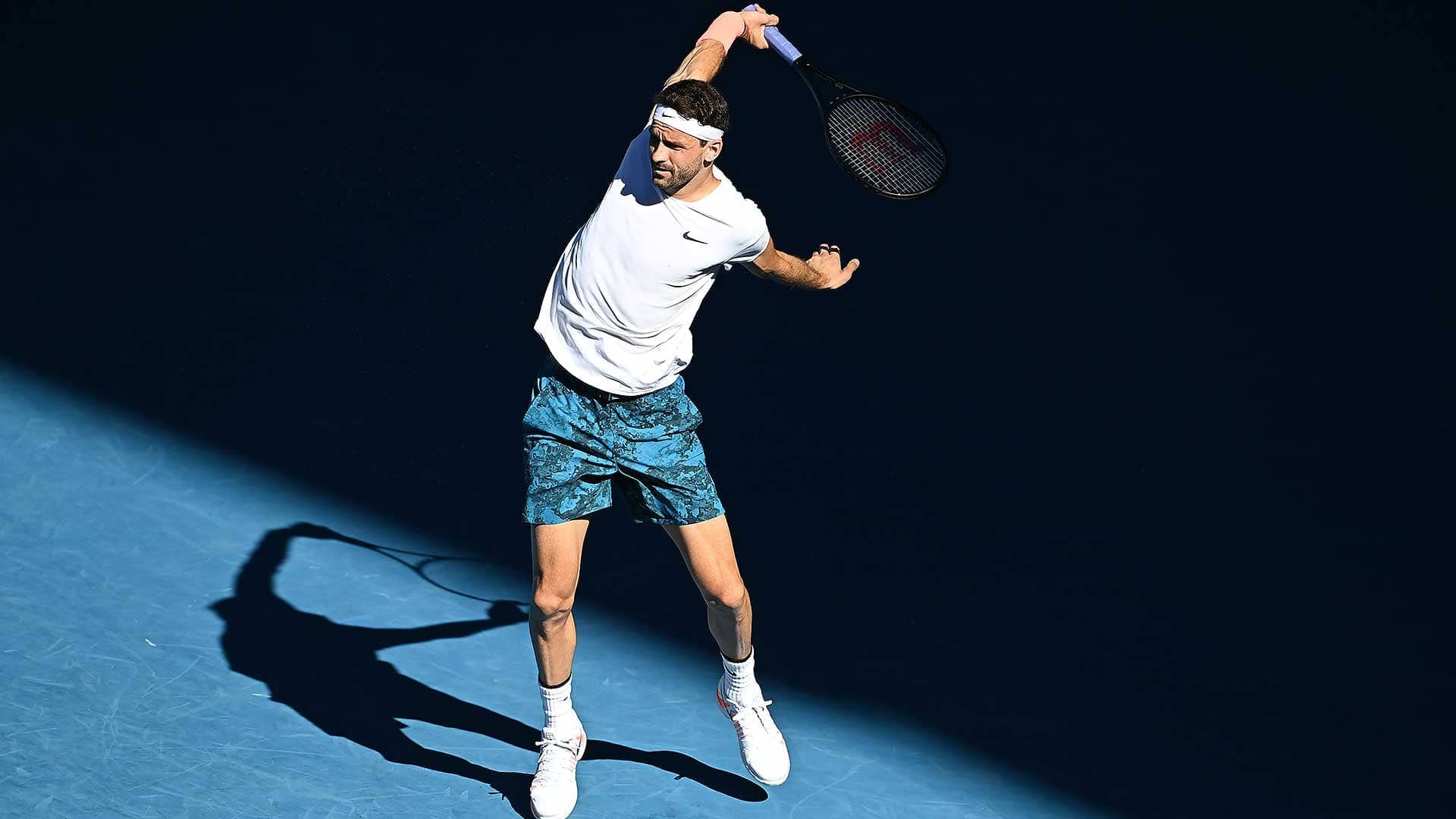 Grigor will be the favourite in the quarter-finals against Aslan Karatsev, who is competing in his first Grand Slam main draw. How do you keep Grigor focused on the task at hand, rather than thinking about how his opponent hasn’t been in this situation and is No. 114?
It’s the same, Grigor knows if the guy is in the quarter-finals it’s for a reason. Obviously the guy is playing very good tennis, he’s very dangerous. Grigor has to focus on his game. We just practise, work on some shots I think will be good for Grigor in the match and that’s it. It doesn’t matter who is in front of him. He just has to focus on his game.

Did you guys speak about goals moving forward?
Of course. Not really specific things. We didn’t set a specific goal before this season, I want to actually talk about that more deeply after this tournament. But of course we spoke a little bit about how I see him playing and where I think he belongs. He wanted to hear that from me, too. I’m very ambitious in that sense and he is too, he’s very eager. Hopefully we can reach the max.

If you want to see Grigor do one thing the rest of the tournament, what would it be?
Keep the same consistency and the same mentality he has been having. He has been very composed, very positive the whole tournament and he has been very relaxed mentally. That’s what I’m expecting from him and I would like to see.