Greek goes more than 30 minutes without making a backhand error

Imagine playing more than a set of tennis in the biggest match of your life and not missing a single backhand groundstroke.

Stefanos Tsitsipas defeated Dominic Thiem 6-7(6), 6-2, 7-6(4) to win the Nitto ATP Finals on Sunday, with his swashbuckling one-handed backhand providing the rock he needed to lean on after losing the opening set.

In the first set, Tsitsipas hit 34 backhand groundstrokes (excluding returns and volleys), collecting one winner, while making eight errors. At 6/6 in the first-set tie-break, Tsitsipas miss-hit a backhand long to gift Thiem a set point. This innocuous backhand error would prove to be a pivotal moment in the final. The match was 65 minutes old, and Tsitsipas would incredibly not miss a backhand groundstroke for the next 35 minutes, until 0-0, 30/40 in the third set.

During that 35-minute period, the Greek made 19 straight backhands while Thiem’s backhand faltered with 11 errors and no winners from 40 shots. Basically, Thiem made a backhand error one out of every four times he hit that stroke, while Tsitsipas simply couldn’t miss the court.

Fast forward to the end of the match, and it was once again the Tsitsipas backhand that stood tall. He made his last nine backhands in a row, including all seven in the thrilling third-set tie-break. Thiem, on the other hand, hit seven backhand groundstrokes in the third-set tie-break, and crucially missed two of them.

Tsitsipas Ad Court First Serves Down The T
Another key battle that the Greek dominated was first serves in the Ad court. Overall, he lost seven first-serve points in the Deuce court, dropping just three in the Ad court. Tsitsipas’ strategy was to overwhelmingly serve down the T in the Ad court, where he didn’t lose a single point, winning all 16 points he directed there.

When you combine Deuce Court and Ad Court, Tsitsipas won a mind-blowing 93 per cent (26/28) of first-serve points going right down the T for the match. 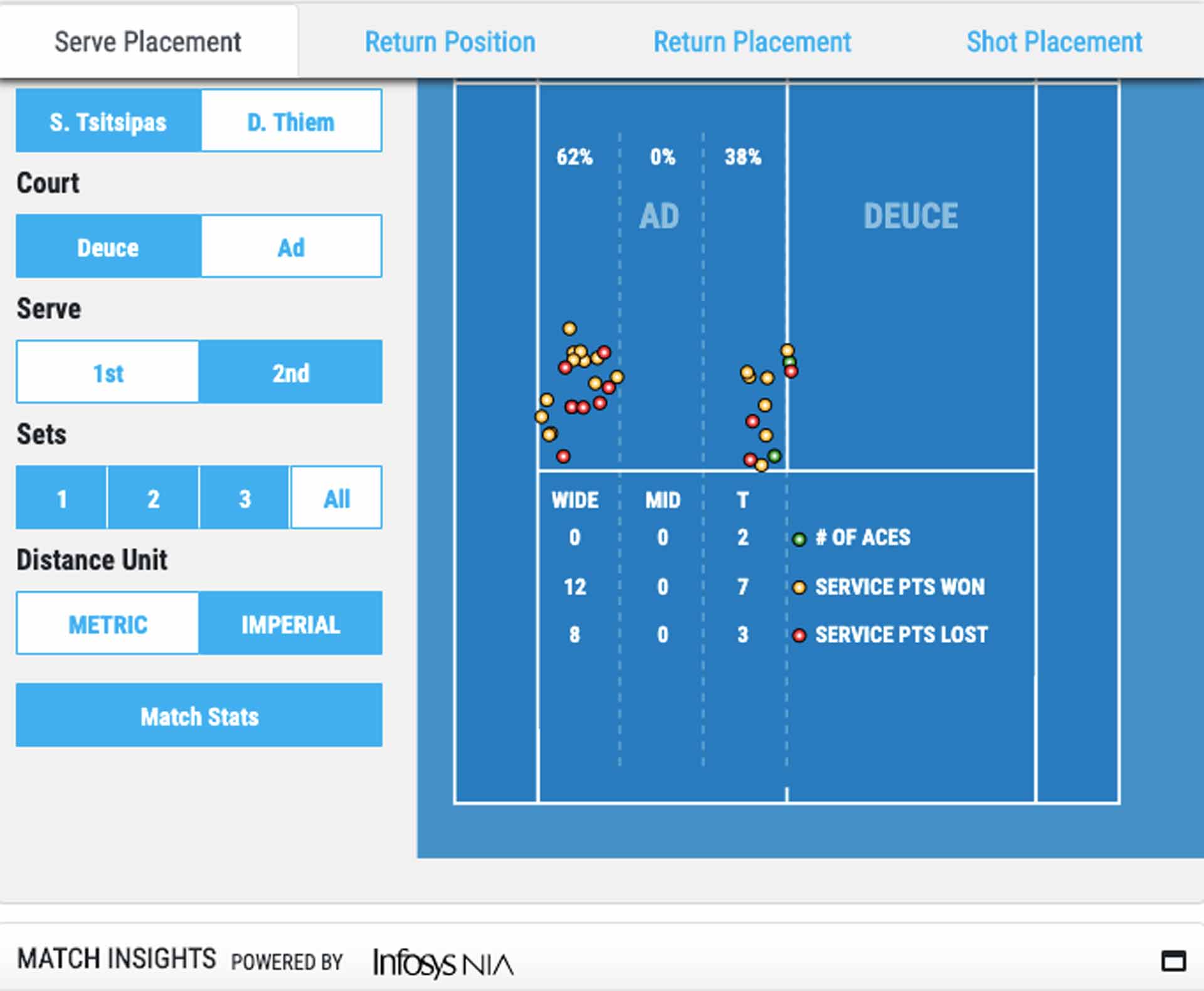 Thiem served out wide in the Ad court at the highest rate (62%) of any location on both sides of the court combined. By doing so, he went to Tsitsipas' backhand. That did not pay dividends, as he only won 60 per cent of those points (12/20) and did not hit one ace.

Tsitsipas' serve was on fire, and the backhand simply refused to break. That combination can get you places.