ATP Staff
This article contains:
Bob and Mike add another milestone on Monday in Cincinnati

When Bob Bryan underwent right hip surgery last August, his hope was to make it back to the ATP Tour for one more match. Forty-nine matches later this season, he and Mike Bryan reached 1,100 tour-level doubles wins as a team by defeating Jeremy Chardy and Fabrice Martin on Monday at the Western & Southern Open.

“It’s a staggering number when you look at it. We thought we’d be stuck on whatever number we were at last year. I was just trying to get back out there to play one more match,” said Bob. “The bar has been set a little bit lower, but as we’re winning and getting more confidence, our goals are getting loftier.”

A low bar for the Bryans still yields a season that most players would dream of. They picked up their 39th ATP Masters 1000 title in Miami (d. Koolhof/Tsitsipas) and prevailed in Delray Beach (d. Skupski/Skupski), in addition to finishing runner-up in Atlanta (l. to Inglot/Krajicek). They’re in second place in the ATP Doubles Team Rankings and are strong contenders to make their 16th team appearance at the Nitto ATP Finals, held at The O2 in London from 10-17 November.

Bob reached 1,100 tour-level doubles wins last week with their second-round victory at the Coupe Rogers, joining Mike as the only players to accomplish the feat. Having already shattered every doubles record in the book, they are now running their own race.

You May Also Like: Bob Bryan Earns 1100 Doubles Wins

“Sometimes when you can see those records and you’re just a couple of steps away, you push a little harder when you see the finish line,” said Bob. “That was a fun time in our careers. We had a blast setting those goals, knocking them down and celebrating those milestones. We’d love to win another Grand Slam trophy, but we’re just trying to enjoy this last chapter and have fun.”

The Bryan brothers are making their 21st main draw appearance as a team in Cincinnati and have plenty to show for it, winning five times and finishing runner-up on three other occasions. But out of the dozens of matches they’ve played over the years at the Lindner Family Tennis Center, a first-round clash from from 2002 is one of the matches that stands out most.

“We played a night match against Luke Jensen and Murphy Jensen and it was a battle with our idols. They were chest bumping, we were chest bumping,” said Mike. “The crowds have always been really good to us here. We have the ‘Bryan Bunch’ and they’ve never missed a match. They wear the green shirts, they’re in full effect, they’ve been supporting us for 25 years.” 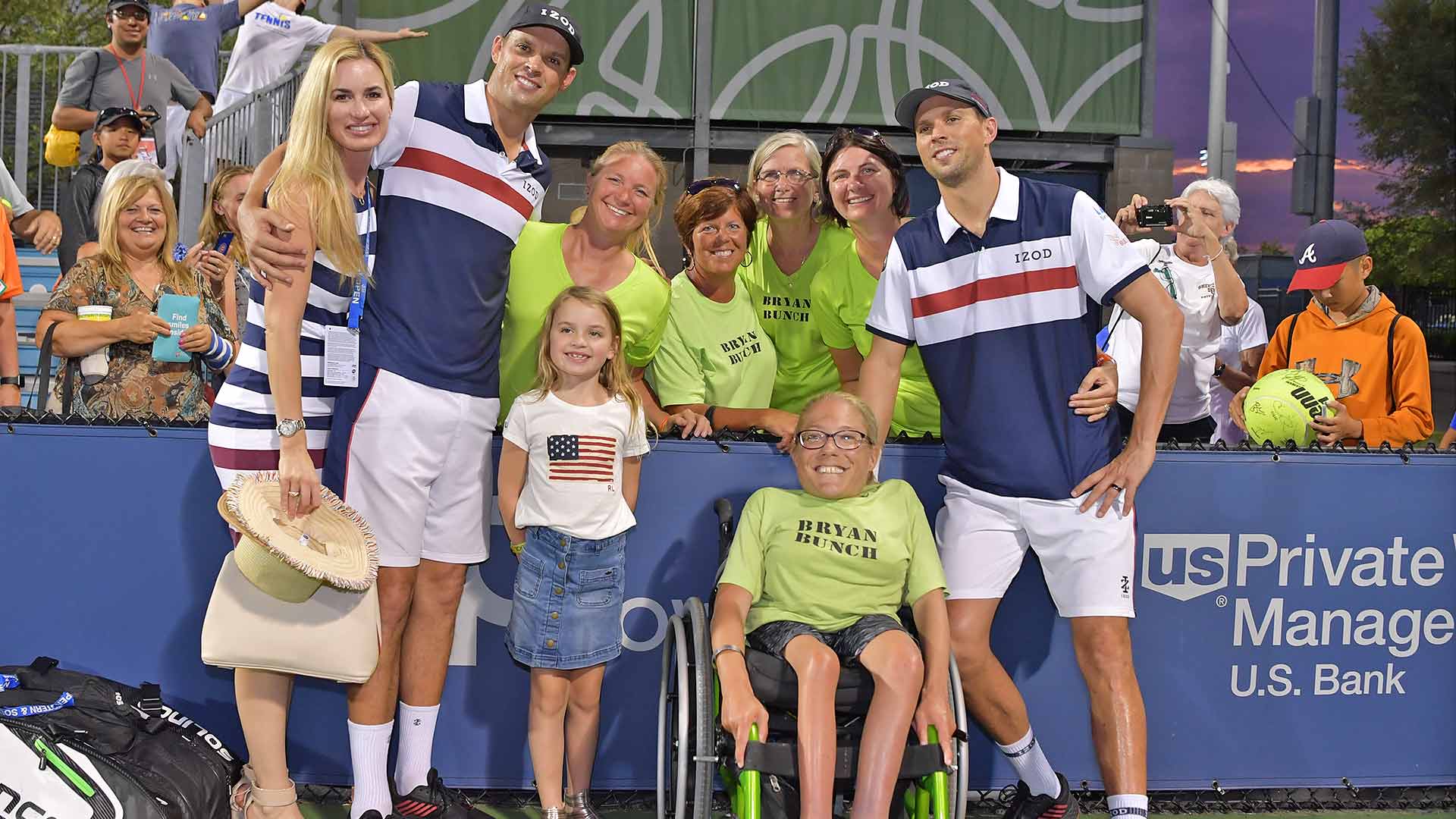 “Winning our first title here in 2003 was a really special moment,” added Bob. “When you win this tournament, you don’t have to pay your ATP membership dues anymore! It’s one of those weird, quirky rules in the system, so our dues have been covered since then.”

Although the Bryans acknowledge that they’re closer to the end of their careers than the beginning, they still have plenty of great tennis left in them. As long as they’re still capable of being the last team standing at the world’s biggest events, they see no reason to slow down.

“If we enter a tournament and feel like we have no chance to win it, then we’ll put our racquets down. But we still feel like we’re in the mix,” said Mike. “The doubles game is so deep and it seems like there are new winners every week. We’ve lost a few tight ones this year where we felt like we could have gone on to hold some big trophies up, so we’re feeling positive about things and really appreciating playing together.”