Alexander Bublik asks Jannik Sinner if he is human at the conclusion of the Miami Open presented by Itau quarter-final.

From underarm serves to sneak-attack returns, Alexander Bublik left no stone unturned in his quest for a maiden ATP Masters 1000 semi-final appearance on Wednesday at the Miami Open presented by Itau.

Despite his high level of play, which had already taken him to No. 11 in the FedEx ATP Race To Turin ahead of the tournament, Bublik fell to a straight-sets defeat against Jannik Sinner. It is the second time he has been beaten by the 19-year-old this month, following a three-set loss in Dubai two weeks ago.

After match point, Bublik could not resist asking his opponent one simple question. Are you human? Sinner laughed at his opponent’s inquiry, before telling the unorthodox 23-year-old he was not human himself.

“You are not a human, man,” Bublik repeated. “You are 15 years old and you play like this. Good job.” 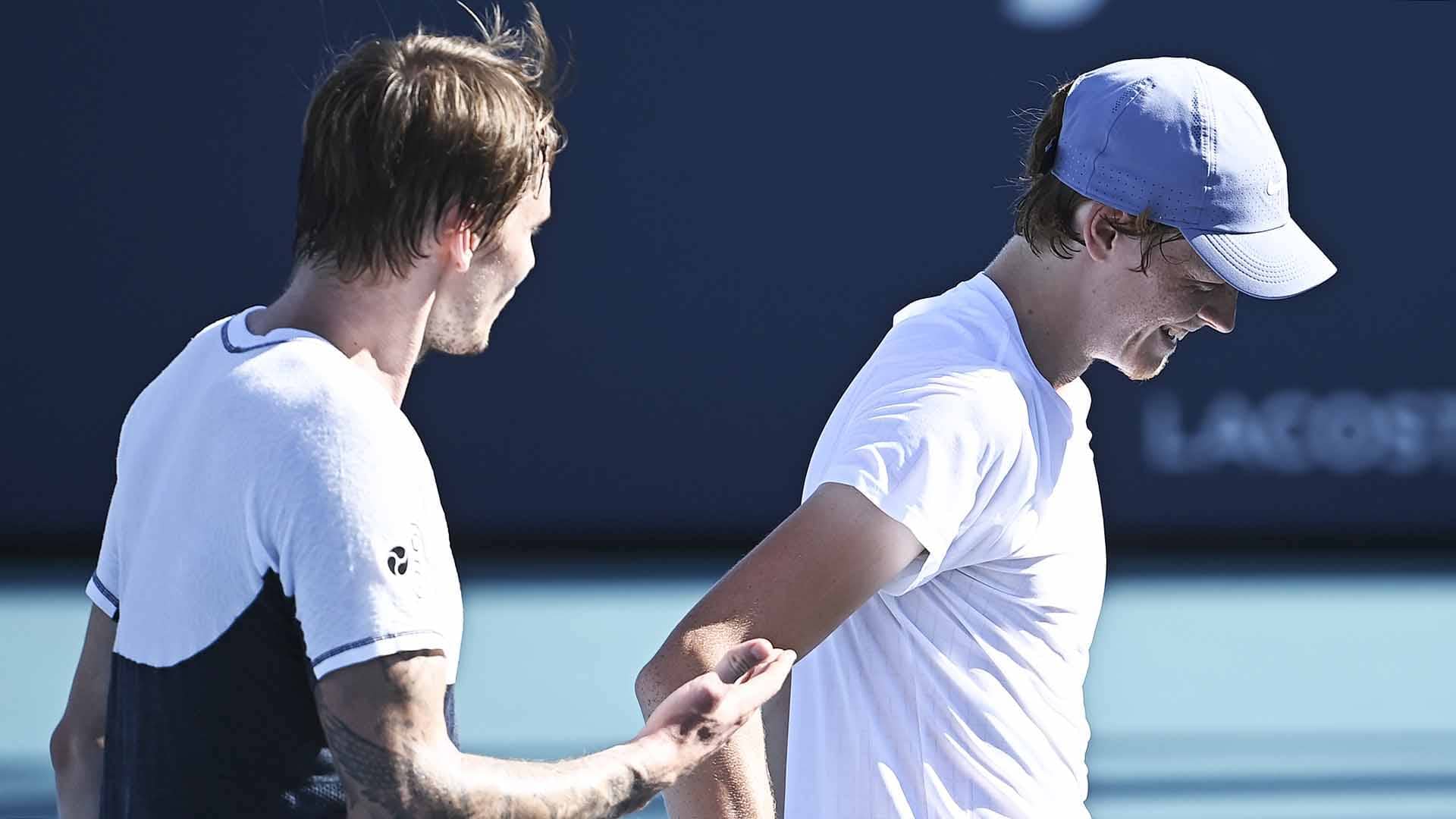 In his post-match press conference, Bublik piled praise on his opponent and gave some insight into the pair’s humerous net exchange.

“He's not [human]. That's a fact,” said Bublik. “I asked him if he's a human or not, because for me, it's very surprising that the guy at his age has this mental toughness that many, many other players don't have. I called him a robot a couple of times during the match, but I do it in a very sincere way because he's a really, really a great player.”

Throughout the match, Bublik placed the 2019 Next Gen ATP Finals champion under consistent pressure. Sinner trailed 3-5 in the first set, 0/3 in the tie-break and 0-3 in the second set, but he maintained his belief and trusted his forehand to turn the match in his favour.

“I played him in a very crucial moment in the tie-break… and [he] pulled off [two] incredible shots when it was 5/4,” said Bublik. “Every time when I had a big point, either I needed to go super crazy like I was doing with the forehand and just [go for a] shot that goes in with a five per cent chance, or he's playing really unbelievable.

“That's why I asked him if he's even a human. He asked me if I'm a human. Of course, I am. I make double faults when I'm break point down because I get a little bit tight.”

Bublik has been impressed by the Italian’s consistent improvement. Two years ago, Sinner was ranked No. 322 in the FedEx ATP Rankings. At that time, he was compiling a 16-match winning streak across ATP Challenger Tour and ITF events in Italy.

Now the second-youngest player in the Top 100, Sinner is a two-time ATP Tour titlist with a Grand Slam quarter-final appearance to his name (2020 Roland Garros).

“You see some youngsters, they come up and they lose some match 6-2, 6-2. Jannik is built different. I said it to his coach. I'm very happy [with] the way I played, and I'm happy for the guy. It's cool [to see] some young ones rising. It's nice.”

You May Also Like: Sinner Handles Bublik Barrage In Miami

Bublik has not only been impressed by Sinner’s game. He has also taken great satisfaction in his own performances, which led him to a maiden Masters 1000 quarter-final this week. Bublik has already won more matches this year (15) than he did throughout the 2020 season (14).

“I'm pretty happy and pretty confident about my game,” said Bublik. “I just try and head to the right direction, do the right stuff and enjoy life.”