Cabal/Farah, Lifelong Friends, Climb To Top Of The World

ATP Staff
This article contains:
Colombian's reach top of the doubles mountain with win at SW19

To understand Juan Sebastian Cabal and Robert Farah’s journey is to know that they are more than just doubles partners. They are, figuratively at least, brothers.

So when the Colombians won their first Wimbledon trophy on Saturday, guaranteeing they would climb to the top spot in the ATP Doubles Rankings for the first time, the moment was even more special. They are not just sharing the accomplishment with a partner, but someone who is like family.

“The moment we're living right now is just crazy. We never actually won three matches here in a row. No two matches in a regular ATP tournament on grass [before this year]. Now we won two tournaments in a row and we're No. 1 in the world,” Cabal said. “What I can say?” 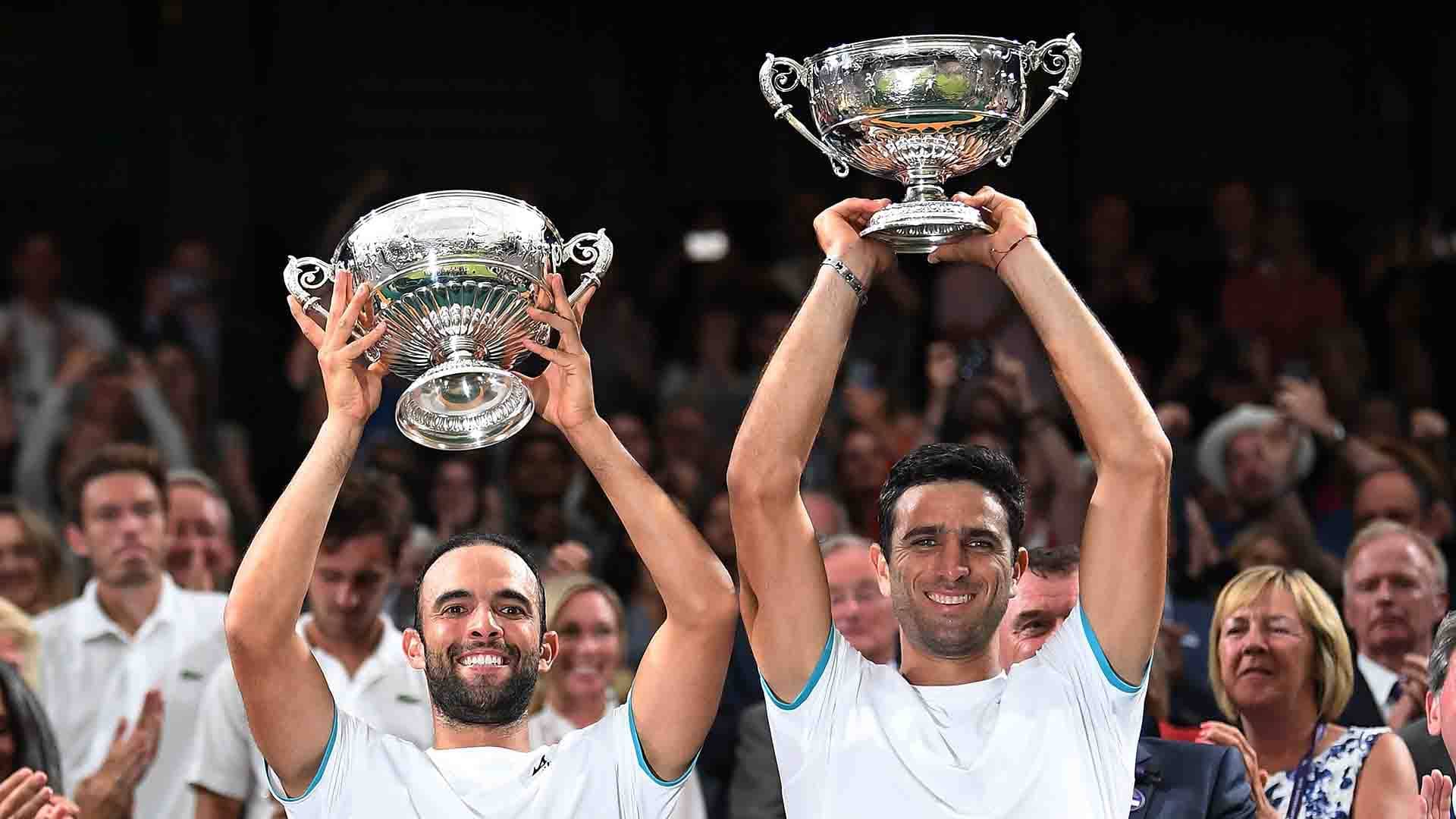 To say it has been a long time coming would be an understatement. Only one other active doubles team on the ATP Tour has competed together longer, and that’s Bob Bryan and Mike Bryan, the American twins.

“We've been friends, almost brothers, since we're five. We literally grew up together. We were sponsored by Colsanitas since we were 10, 11, grew up together in a house,” Farah said. “That gives you a strong bond. Not only with Sebas but with all the other Davis Cup players: Alejandro Falla, Santiago Giraldo. And obviously Sebas and I, since I left college in 2010, we said, ‘Let's play together.’ We had played before I went to college. It worked out from the beginning. It clicked.”

Five years ago, the pair won its first tour-level title together in Rio de Janeiro. The Colombians claimed 13 crowns as a team after that. And on Saturday, Cabal and Farah defeated Frenchmen Nicolas Mahut and Edouard Roger-Vasselin in a four-hour, 57-minute thriller to become the first Colombian players to win a Grand Slam men’s doubles title.

“We focus on our game. We have our rule: just fight until the last point. We keep fighting, keep working,” Cabal said. “Everything make sense. We're here, we won Wimbledon. It's amazing. We're No. 1.

“For Colombia, it's huge... I don't know how to explain it, but it's huge for our country. I hope everybody enjoys [it with] us.”

Cabal and Farah are coached by Jeff Coetzee, a six-time ATP Tour doubles titlist from South Africa. Under his tutelage, the Colombians qualified for the Nitto ATP Finals for the first time last season, and now, not only are they major titlists, but tied atop the ATP Doubles Rankings.

“He deserves everything. We get the credit, but actually he's the guy that changed our lives, changed our tour, changed our tennis level. He's the one that put in the work behind the scenes,” Cabal said. “He deserves equal credit or more than us because he is a life changer for us. We respect him. We give him all the credit he deserves. We're really happy life put him in our lives.”

How has this team blossomed over the past couple of years? The Colombians believe they complement each other well, and that has made them a dominant force on the ATP Tour, especially this season. In the ATP Doubles Race To London, Cabal and Farah have nearly double the number of points (5,250) as the second-placed team, Bryan/Bryan (2,690). Cabal/Farah are 34-10 in 2019 with four titles, including their second ATP Masters 1000 triumph in Rome.

“I know Sebas has the touch, has the magic in his hands,” Farah said. “I have the power. I feel like that's a very good duo. It's great to live this with your brother, your brother like from another mother. It's a cliché, but it's really what it is.” 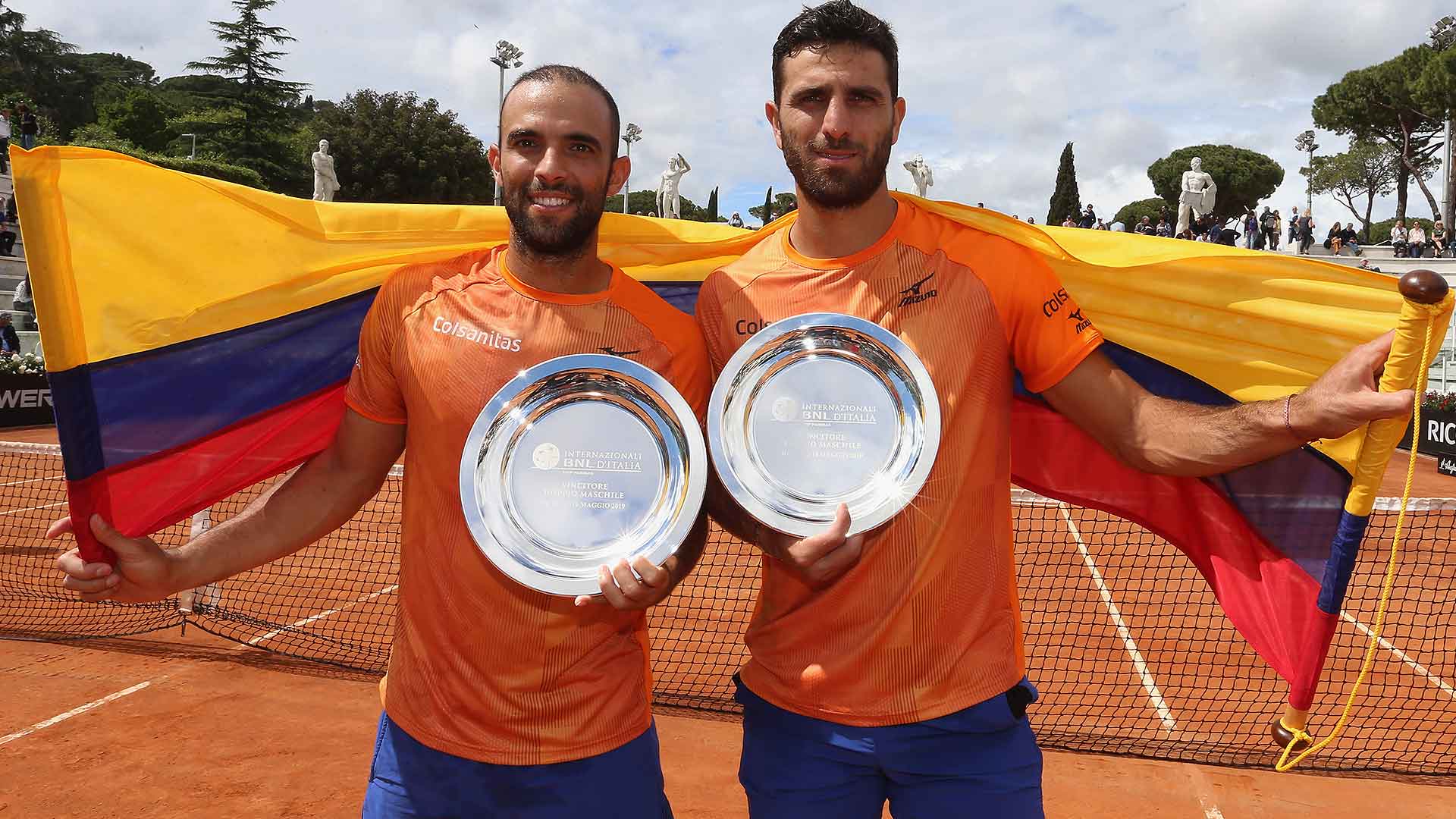 After the journey they’ve gone on to reach this moment, perhaps it was fitting that Cabal and Farah faced the stiffest of challenges in the Wimbledon final. It’s taken nonstop hard work and dedication, and they needed every bit of resilience they could find to emerge victorious on Centre Court.

“I'm speechless. Really, I kept watching the watch through the first and second set. I'm like, we finished the second set and it's been 2 hours and 15 minutes play. This is ridiculous. How long is this?” Farah said. “From there on, we just kept battling, kept battling, just focussed on the game. Once we lost the fourth set, we had that break. We sat down, I put my legs up, I got a rub by my physio. Sebas put his legs up, too… Once we come back to the court, I seriously had a second wind. I felt so good again. I feel like we played unreal that fifth set.”