Juan Sebastian Cabal and Robert Farah won their second Grand Slam title as a team at the US Open.

Colombians Juan Sebastian Cabal and Robert Farah are firmly in control of the top spot in the ATP Doubles Race To London after claiming their second Grand Slam title of the season at the US Open. But with seven berths into the Nitto ATP Finals remaining, there is plenty at stake for the world’s best doubles teams.

Cabal and Farah won their second consecutive major on Friday, earning 2,000 points to move their total in the Race to 7,940, which is more than double the second-placed team of Lukasz Kubot and Marcelo Melo (3,445). Last year, the Colombians qualified for the season finale for the first time, and now they are nearing their first finish atop the year-end ATP Rankings. 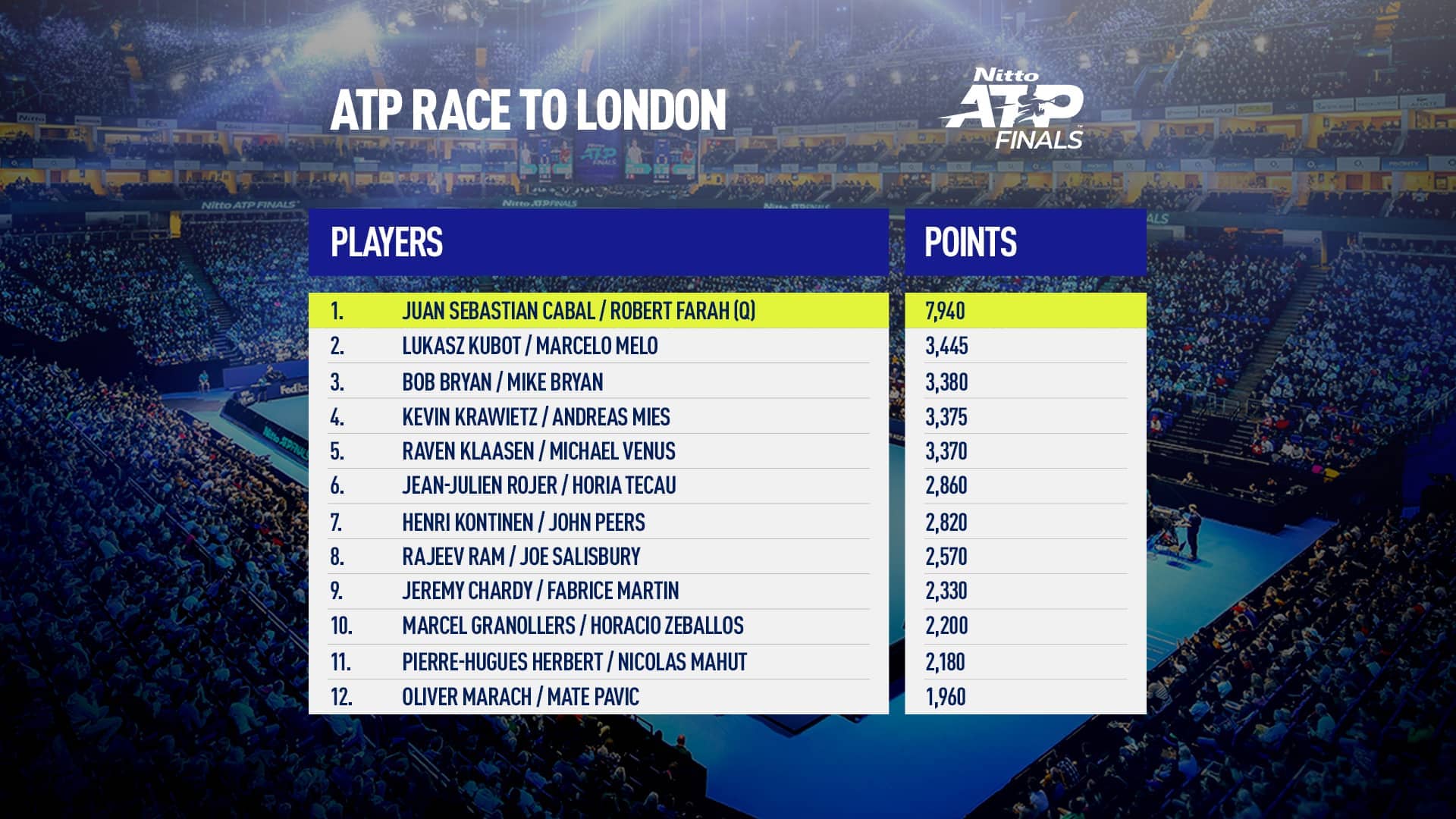 Bob Bryan and Mike Bryan, who have won 118 tour-level titles together, are in strong position to earn their 15th Nitto ATP Finals qualification as a team. They are in third place with 3,380 points, just five points ahead of Kevin Krawietz and Andreas Mies, the Roland Garros champions and US Open semi-finalists who seek their first trip to London. Only five points behind the Germans are 2018 qualifiers Raven Klaasen and Michael Venus, who are trying to make the season finale for the second consecutive year.

Typically, the Top 8 teams in the Race automatically qualify for the season finale in London, to be held at The O2 from 10-17 November. But that may not be the case this year.

Frenchmen Pierre-Hugues Herbert and Nicolas Mahut won the Australian Open, but they are in 11th place with 2,180 points, outside of the cut. If Krawietz and Mies do not fall from the Top 7 and the Frenchmen are outside the top 7, they will qualify based on the Grand Slam winner rule.

If both Krawietz/Mies and Herbert/Mahut do not make the Top 7 and are placed from No. 8-20 in the Race, then only the higher-placed team will make London as the Grand Slam winner rule applies to just one team.

Two pairs which have lifted the trophy at The O2 are currently positioned to return to London. Jean-Julien Rojer and Horia Tecau, the 2015 titlists, are in sixth place with 2,860 points, and two-time winners Henri Kontinen and John Peers are 40 points behind.

Currently rounding out the Top 8 is the first-year team of Rajeev Ram and Joe Salisbury, who have 2,570 points. The American-British duo was victorious in Dubai earlier this year and has reached two additional finals in 2019.