Pablo Carreno Busta continued his tear through the Montreal draw on Saturday night with an all-action semi-final victory against Daniel Evans. The Spaniard won a high-quality battle of unseeded upstarts 7-5, 6-7(7), 6-2 to reach his first ATP Masters 1000 final.

The 31-year-old had a match point in the second-set tie-break but saw his perfect set streak on the week snapped at nine before storming back in a dominant final set. After so little separated the competitors for most of the two-hour, 58-minute marathon, Carreno Busta raced through the finish line by winning the final 12 points, including eight on return.

"It was fun for the crowd but for me it was tough," he said of the gripping encounter. "I had a match point in the second set but he served pretty good so I couldn't do anything. When you have a match point and have to play another set, it's always hard to do it.

"Mentally I think I was very good. Probably the beginning of the third set was the hardest part of the match. But after that I thought I had to be more aggressive, try to push a lot, try to go to the net, and it was good."

Carreno Busta will next face eighth seed Hubert Hurkacz as he bids to become the first unseeded champion at the National Bank Open Presented by Rogers since Argentina's Guillermo Canas in 2002.

The World No. 23 advanced to his second final of the season (Barcelona) by pairing his aggressive baseline game with a dominant first-serve performance in which he won 79 per cent (49/62) of points on his first delivery. He fired 43 winners and broke on five of his eight chances as he took control of the match down the stretch.

Despite neither player being seeded, this semi-final was a heavyweight fight complete with both men hitting the deck after being wrong-footed in a bruising rally. After Evans fell earlier in the match, Carreno Busta slipped late in the second-set tie-break to hand a mini-break back to Evans.

According to INSIGHTS: In Attack metrics, Carreno Busta was the aggressor throughout the evening, playing more balls from attacking positions than his opponent. But the gap was widest in the final set as he turned the screw, recovering from a lost match point to land the decisive blows. The Spaniard played 28 per cent of his shots from attacking positions in the third set, double the percentage of his opponent. 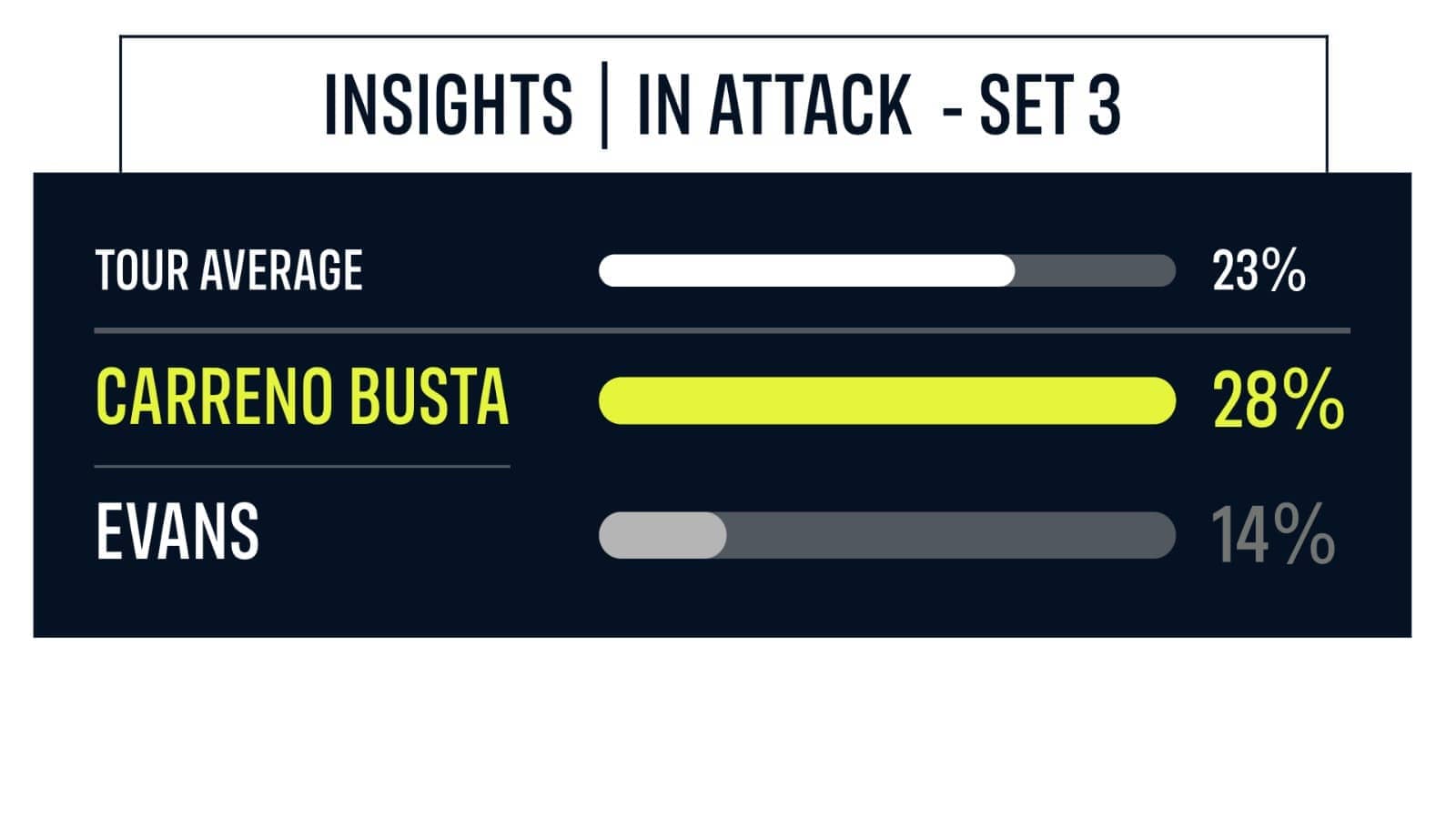 Carreno Busta did much of his attacking from the backcourt, while Evans put the pressure on with 45 net approaches, winning 32 of them (71%).

The Spaniard knocked off seeded Italians Matteo Berrettini and Jannik Sinner to kickstart his Montreal run, a welcome change from what he called "probably the worst year of my career". He now has a chance to claim his seventh and biggest ATP Tour title.

"This week, I don't know why but the level was unbelievable," he said. "I played really good matches at the beginning of the tournament. Yesterday [against Jack Draper] was not the best match but I suffered and I competed a lot. Today was the same. Probably I didn't play the best tennis of the week but it's very important to win these kind of matches when you are not playing your best. Happy to be in the final.... For sure I'm excited."

Carreno Busta has moved up 14 spots to 15th place in the Pepperstone ATP Live Race To Turin this week, with a chance to move up to 11th with the title.

He and Hurkacz split their two previous ATP Head2Head meetings, both in 2021, with the Spaniard winning in Cincinnati and Hurkacz victorious in the Metz final.

That week in Metz, Hurkacz also won the doubles title with fellow Pole Jan Zielinski. His hopes of repeating that title sweep in Montreal were ended Saturday by Evans and John Peers in the semi-finals, where the British-Australian pair defeated Hurkacz and Zielinski 7-5, 4-6, 10-4.