Josh Meiseles
This article contains:
The Odlum Brown VanOpen celebrates in front of the home fans in Vancouver

Canada has never had it so good. The months of July and August are a grand celebration of tennis, as the summer kicks into high gear with a bevy of professional tournaments.

Consecutive ATP Challenger Tour stops in Winnipeg, Gatineau and Granby are followed by the Rogers Cup - an ATP Masters 1000 event - and it all culminates with the award-winning Odlum Brown VanOpen in Vancouver. These tournaments have become a breeding ground for Canadian talent and Vancouver is fast gaining the recognition it deserves as one of the elite events on the pro scene.

On Tuesday, all eyes were on the Challenger 100 event as it was honoured for a second straight year. It is not an easy feat to earn 'Tournament of the Year' honours on the circuit. It takes years of hard work, dedication and commitment to growing the game and providing a world-class experience for the players and fans.

That said, to take home the award on multiple occasions is an extraordinary accomplishment. The Odlum Brown VanOpen did just that in 2017 and 2018, culminating with a special celebration on Tuesday evening at Hollyburn Country Club.

In front of a packed crowd on Center Court, ahead of the Day 2 night session, the tournament was presented with the 2018 Challenger of the Year award. Tournament director and former champion Rik de Voest and tournament chair Carlota Lee received the crystal trophy. 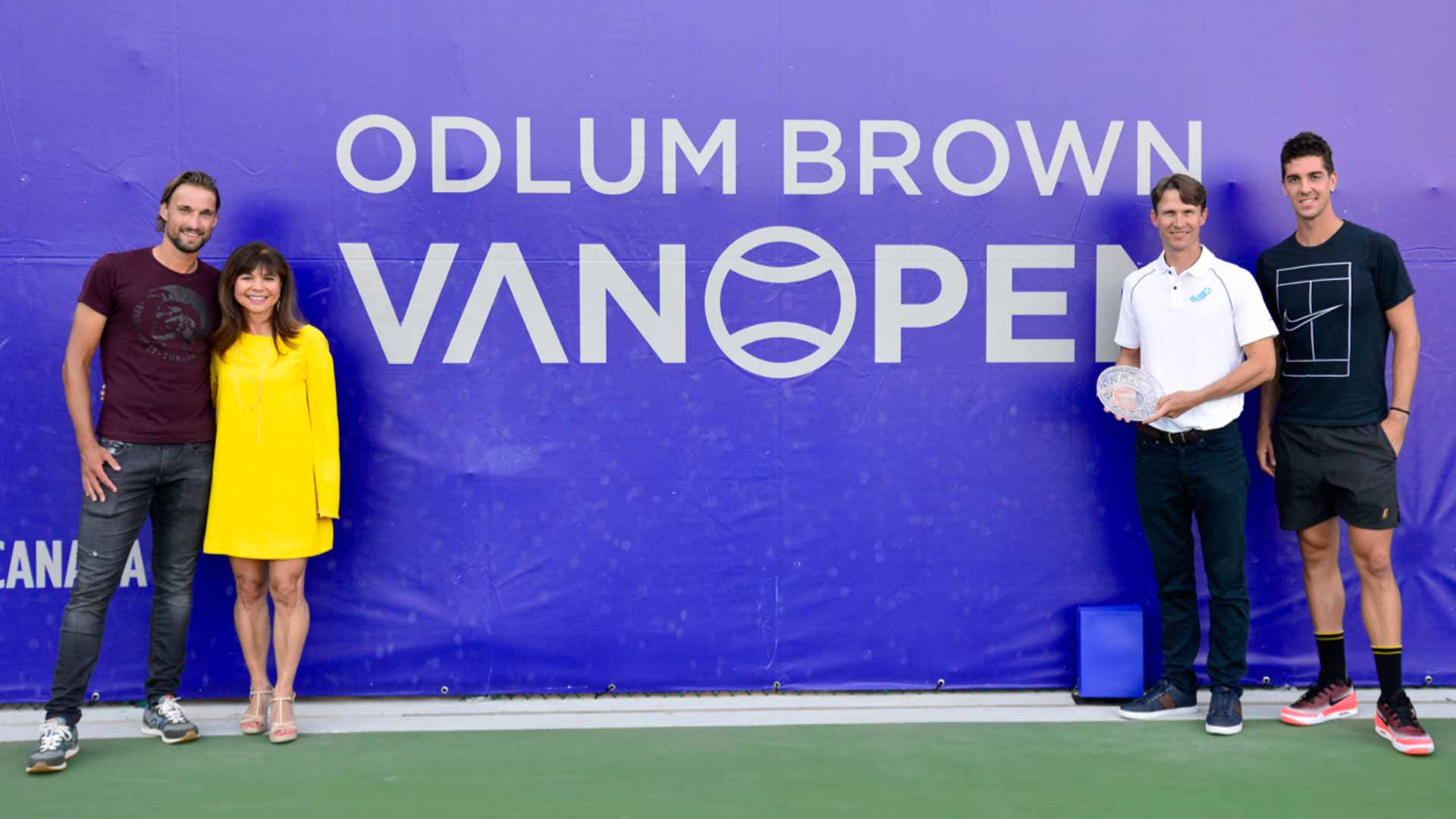 "In early 2005, [club CEO] Ed Laughlin walked into a senior leadership meeting and announced that Hollyburn would be hosting a professional tennis event on the ATP Challenger Tour," De Voest said during the ceremony. "Little did anyone realize just how many lives this tournament would impact, including my own.

"We are honoured and humbled to be receiving this award from the ATP for the second year in a row. It's a testament to our dream of bringing professional tennis to Vancouver. And finally, to the tenacity and hard work of Carlota Lee, who executes ideas at a whole other level.

"Carlota and I are so proud of the example this tournament sets in the tennis world and to future tennis generations. For the last 17 years, this tournament has been bringing people together in a meaningful way that has resulted in many memorable moments and life-changing stories." 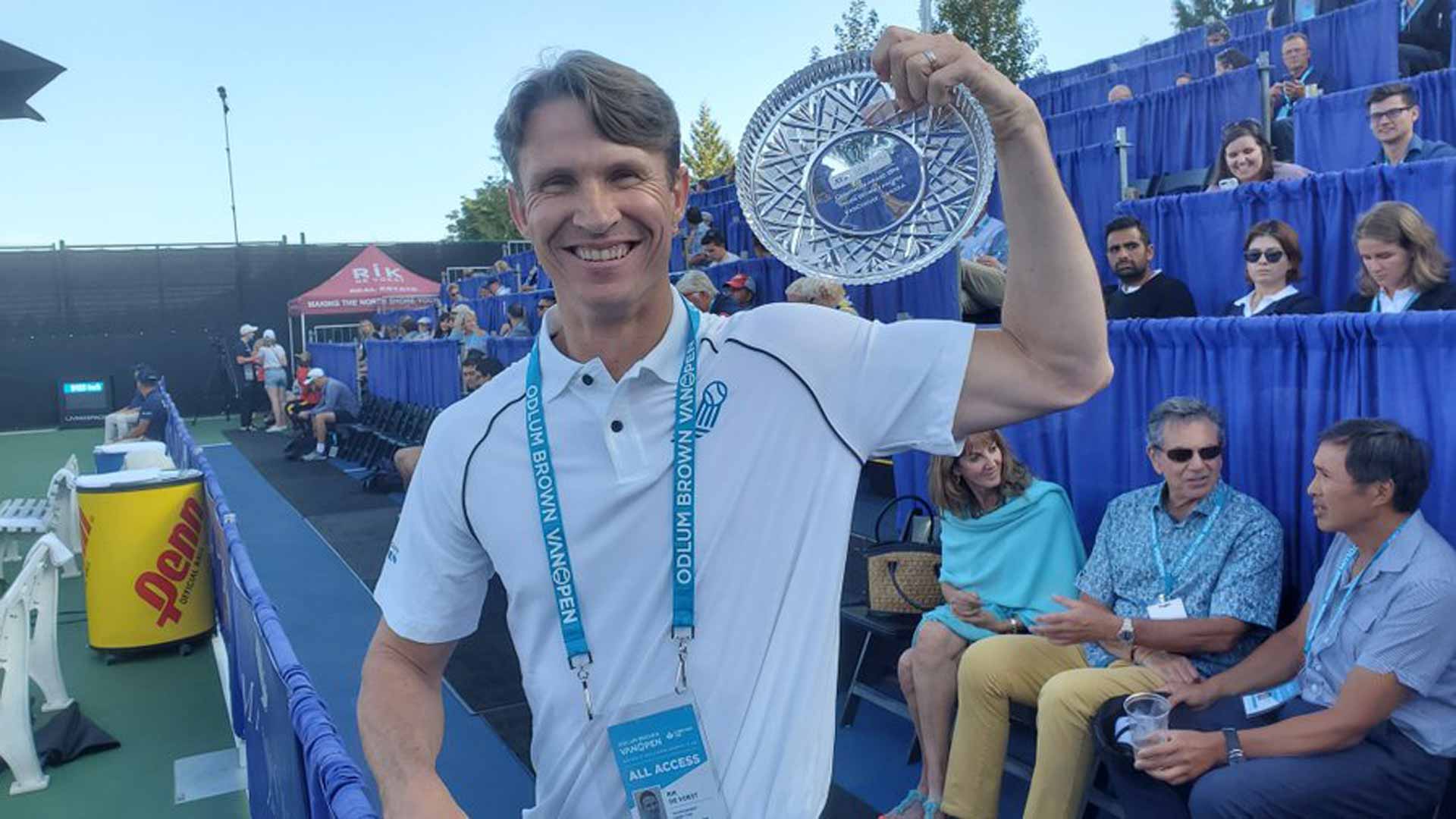 Thanasi Kokkinakis and Ruben Bemelmans were also on court during the ceremony. Bemelmans is making his seventh straight appearance in Vancouver, while Kokkinakis returned for a third season. It's easy to see why players keep coming back year after year. Surrounded by the Howe Sound and Coast Mountains, players visiting Hollyburn have not only been treated to a world-class and opulent facility, but a relaxing retreat during the hectic summer hard-court season.

And perhaps the tournament's greatest feature is the housing it offers its players. Traveling throughout the season can take its toll both physically and emotionally. A slice of home life on the road is always welcomed and with Hollyburn members opening their doors - and fast cars - players are treated to some of the finest hospitality the tour has to offer. Million-dollar mansions are the norm at this Challenger stop and both Kokkinakis and Bemelmans made sure to acknowledge their host families during the award presentation.

Watch their speeches below...

The Challenger Awards are a recognition of excellence, selected by players from the global Challenger Tour of 160 events staged in 40 different countries. In its 14th edition, the Odlum Brown VanOpen was once again recognised as being outstanding in terms of facilities, organisation, imagination, promotion and player welcome.

The commitment and hard work of the tournament team, the support of the municipality, local authorities, sponsors, the press and the public produced a wonderful week of professional tennis. Moreover, the tournament joined the NECKARCUP in Heilbronn, Sparkassen Open in Braunschweig, Germany, as well as the former Ethias Trophy in Mons, Belgium in winning the award on multiple occasions.

In 2018, three tournaments were recognised with the Challenger of the Year award, with Vancouver accompanying Heilbronn and the Puerto Vallarta Open in Puerto Vallarta, Mexico in the winners' circle.