Following a great week last week where I bagged my first ATP Challenger Tour title in Cary, North Carolina, I’d like to fill you in on the story behind what is a milestone moment in my career.

It’s funny how it all came about but I wasn’t even meant to be playing Cary Challenger! Just a few weeks before, I had qualified into the Winston-Salem ATP World Tour 250 event and it was there that I chose to play three events in China next. I went online to enter three events (Nanchang Challenger, Kaohsiung Challenger and an ATP event in China) and called a friend who coaches in Singapore to see if he could help out one of the weeks in China. He agreed and I went straight into making travel plans, hotel bookings and preparing all the logistics behind the trip. The final thing to sort out was applying for a Chinese Visa and I’d be set. ”Easy” I thought..

A week after applying for my Visa and going through all the administrative details of paperwork, invitation letters, head shots etc. I woke up to a phone call from the Chinese lady I spoke to at the Visa Office. ”Uh, sorry sir but your Visa has been rejected.” I thought she was actually joking as she sort of laughed as she said it but after 20 minutes of questions and answers, I came to learn that there was a G20 Summit in China at the time and apparently the Chinese Consulate in Houston was rejecting applications for foreigner Visas. The timing couldn’t have been worse and there was nothing I could do about it.

Thankfully, I still had the option of playing a different tournament that week so I decided to sign-in to play the qualifying of Cary Challenger. It was just a six-hour road trip up from Atlanta so myself and my friend Julian Bradley rented a car and headed up there Thursday morning.

I was the first seed in the qualifying event and played my first match on Saturday afternoon on Stadium Court in Cary. I struggled with the feel of the ball and the court surface at first but knew I could work my way into it. I came through my qualifying matches after playing three current and former college tennis players and drew another former college tennis player in the first round of the main draw, Evan King. Evan is a great guy with a big lefty serve and I managed to come through that match, although neither of us played our best tennis on the day. I went on to beat the No. 6 seed, Darian King followed by a quarter-final win over Brayden Schnur, who had some local support as he is a former UNC Tar Heel.

Read the rest of James' entry on his blog 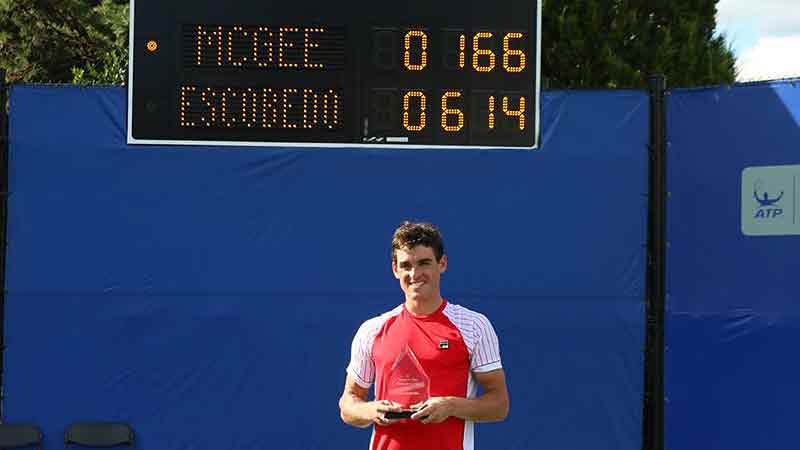