Nicolas Jarry's victory on home soil in Santiago propelled him to the Top 100 of the Emirates ATP Rankings.

Nicolas Jarry
This article contains:
Chilean writes about his journey to lift the trophy in his hometown of Santiago and break into the Top 100

There were so many unforgettable moments and I learned a lot about myself this year. Many times I didn't really believe it, but being patient is so important. Trusting in my abilities and keeping the same focus through the good days and the bad days.

Since I turned pro in 2014, I put a lot of pressure to win matches and lift my first trophy. I'm only 22, but it has already been a long road. After breaking my wrist two years ago, I needed to not only build my strength but also find my confidence. This was the hardest part, but I know that I am better because of it. If you told me that I would win my first three Challenger titles and finally reach the Top 100, I would have said you were crazy. I also qualified for my first Grand Slams at Roland Garros and Wimbledon. All in the same season. I still don't believe it.

But what I am most proud of came in November. It was a long year. I played in 27 tournaments. I was very tired when I returned home to Santiago. The off-season and a nice vacation were just two weeks away. But it gives me so much energy to play in my hometown with everyone supporting me. And that made it even more incredible to win the title. I didn't lose a set all week. It was amazing with my friends and family there.

This would not have been possible without them. They have given me so much. To see their faces after I won the title, how proud and excited they were, it was very special. I won my first Challenger titles in Medellin, Colombia and Quito, Ecuador during the summer, but this one has a special place in my heart.

Since the beginning of the tournament, I knew in the back of my mind what I was playing for. If I did well, I would enter the Top 100 for the first time and had the chance of playing in the main draw in the Australian Open. But I was thinking match by match. When I won the semi-final, I wasn't aware of how close I was to the Top 100 until I went to sleep. All the thoughts came to my head. I was thinking that one of my best friends would be able to go with me to Australia, if I won. Tennis can be very lonely and I have never traveled with friends, so I really wanted this. Fortunately, I fell asleep quickly. It wasn’t like my first Challenger final in Quito 2014, when I remember seeing the clock until 4 am.

My aunt Catalina Fillol is the tournament director and the happiness I felt was indescribable. I was very emotional between the last point and the trophy ceremony. While she was making her speech, she started crying. This made it even tougher to keep myself from doing the same.

Tennis is a huge part of our family. My grandfather Jaime Fillol, Sr. is a former Top 20 player. He was extremely proud but we didn't talk much because the final finished late. He is the reason I started playing tennis. I wouldn't be here if it wasn't for him. He is a legend in Chile. He was the tournament director at the old ATP World Tour event in Vina del Mar. He ran many tournaments in the same club over the years and I was a part of that. Some of my earliest memories are from those tournaments. His face said everything after I won and it was very special to have him give me the trophy. 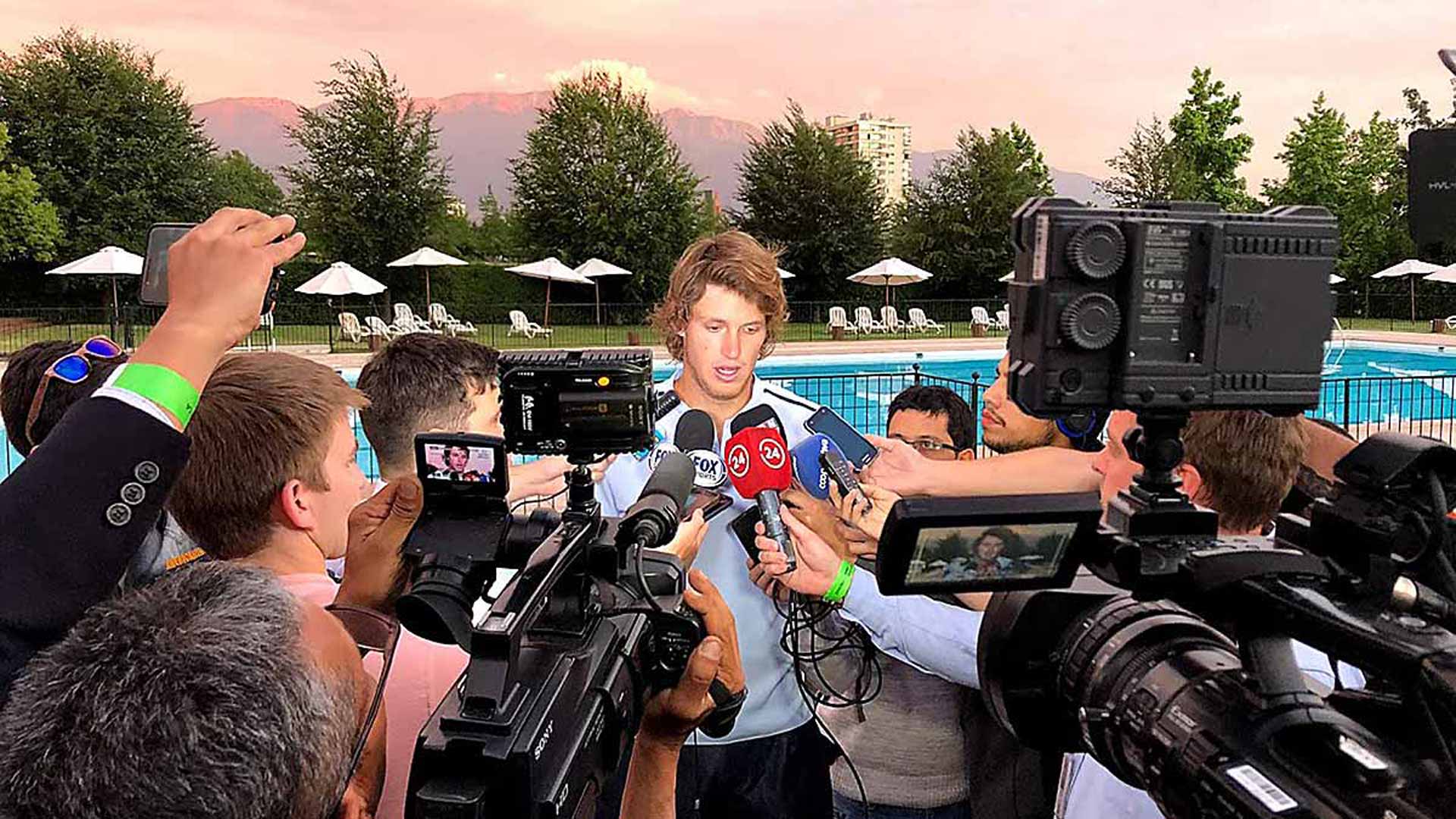 During the whole week the stadium was packed. I was amazed by how many people came to watch. It’s so nice to see that tennis is becoming popular again. Among the crowd were some familiar faces as well, such as Nicolas Massu, Fernando Gonzalez and Adrian Garcia. These three were the guys that I looked up to. They made the title even more special. I am very close with them too. Adrian used to live in my grandfather’s house, so he knows me since I was two years old.

Fernando is also close to my family and one time, before the final of the ATP event in Viña del Mar, he was nervous and started playing with me. I was that little kid at the tournament that was always running around. He grabbed me and pulled me into his arms. I had my racquet in my hand and smashed his leg. He won the tournament, so maybe it was because of me. I like to think I removed his nerves. And Nico – since he became Davis Cup captain we are close friends. They have been incredibly supportive during my career so far. They support me 100 per cent and I turn to them whenever I need help or advice.

I also have to thank the fans that came to the club during the week. Playing in Chile is the best. We are very nationalistic and we love to play for our flag. When we play sports, the people go crazy. You might have seen videos of how loud and passionate we sing our national anthem in football matches. For me, it’s very special to play at home and more when your whole family comes to the tournament. I have a few uncles and cousins that live away from Chile and they all came for the week. My mother has one brother and three sisters and I’m the oldest of 16 cousins. They were all running around the club and asking me to play with them.

It’s weird to play in a tournament while you are sleeping in your own bed, eating at home and hanging out with friends in the same week. I was always worried that it might distract me from practice and the things that I have to do on court. But with the help of my team and friends, they gave me space in the right moments and I was able to perform in the best way possible to have an amazing week.

Now, with the 2018 season already here, I could not be more excited. I hope to play more on the ATP World Tour and will start in Pune next week. I know my journey is just beginning.