Robert Davis
This article contains:
Veteran tennis writer Robert Davis provides an inside look at the ATP Challenger Tour through his series of dispatches. This week, he witnessed Zhang Ze become the first player from China to win multiple titles, with his victory in Chengdu.

Watching Henri Laaksonen attempt to hold serve during this week’s ATP Challenger Tour event in Chengdu, Chinese fans were about as comfortable as sitting in the dentist chair. But they don’t call him “Breakback Laak” for nothing. Time and time again this week, Laaksonen would showcase his second biggest weapon by firing returns with pinpoint precision. I said, second biggest weapon, because as good as his returns are, his mental toughness is even stronger.

Laaksonen reached the final by winning all of his matches in three sets while saving a few match points along the way. The Swiss is a bit of a throwback to the days of Borg, Wilander and Nystrom; calm, cool and very collected. Laaksonen’s clothes are about as colourful as the Finish Laapland and beside his chair a dozen sweaty wristbands lay like litter on the court drying out in the sun.  One would almost expect Laaksonen to pull out a hardhat and jackhammer from his bag the way he goes about his job of winning tennis matches.

Today’s opponent in the final was China’s Zhang Ze. The No. 1 player from China knows a thing or two about playing with pressure. He has been the star in his country for a long time now and let me tell you that is not easy. Here in China, results - not effort - get applauded. Over the years, Zhang has had a lot of foreign coaches.

“I have had some very good expert coaches,” Zheng Ze says. “And I am sure they were all correct in their methods and advise. One says, ‘In this situation, stay back, and the other says, ‘no, in this situation you should attack.’ Sometimes I don’t know what to do. Often, I do what they want even if I don’t feel it. Now, I want to play my style and yes, I listen to my coaches, but I cannot play to please everyone.” 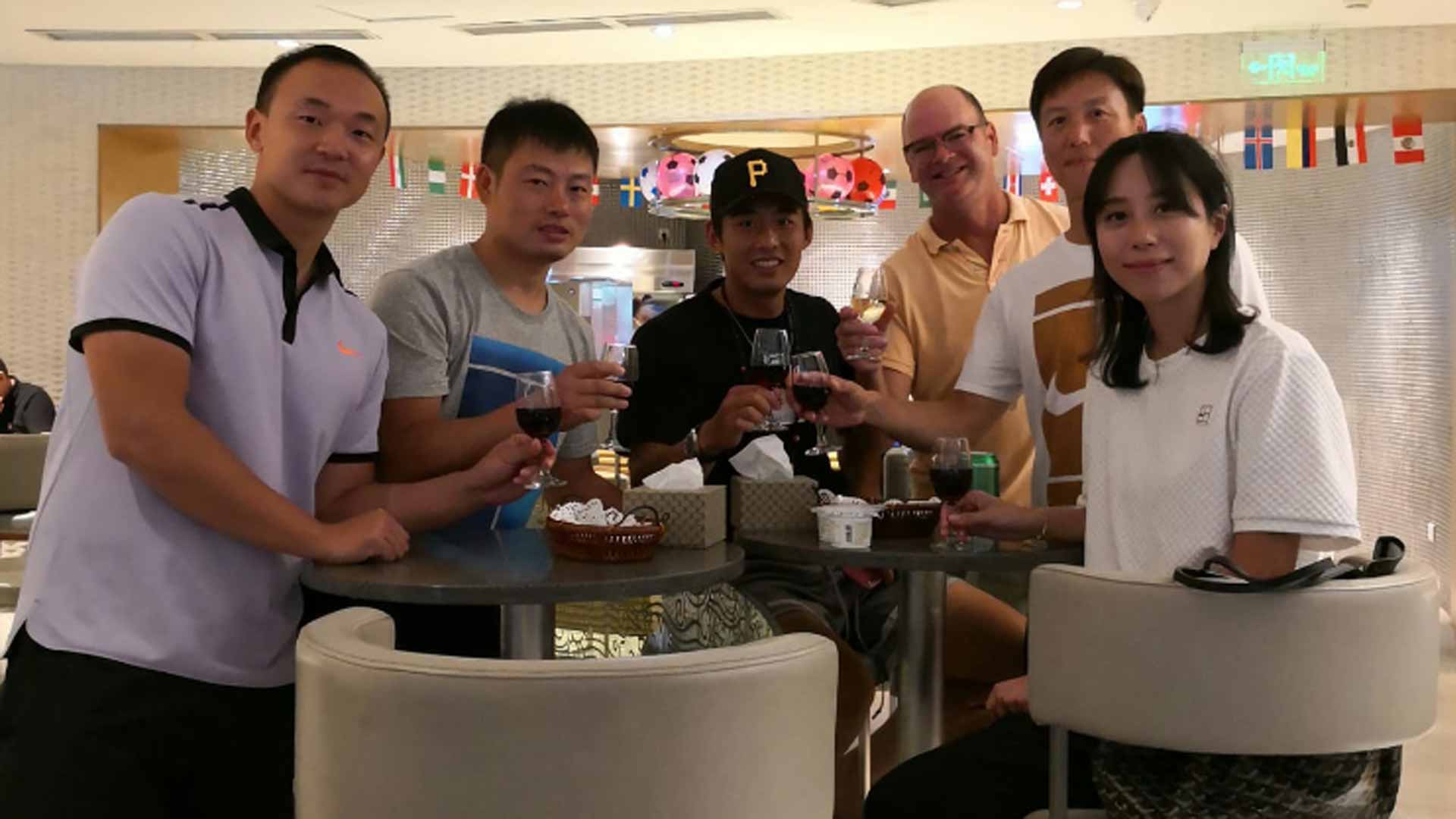 Zhang brings up a very good point. China has had a lot of very experienced and successful foreign coaches over the years. Success in the men’s game is not if, but when. There have been heaps of knowledge transfer and having observed the Chinese men’s and women’s team training recently in Beijing, I can testify that the Chinese coaches are quick learners. I was very impressed with the level of training by their high performance coaches.

Zhang also played doubles this week with Gong Mao Xin. They would go on to take the title without dropping a set. Before coming to Chengdu, they were in a national team training camp at the Beijing Olympic Center prepping for the upcoming Asian Games in Indonesia. The Chinese team left nothing to chance: VO2 Max fitness testing, SMART court analysis, and heaps of doubles training was well planned and executed.

In the singles semi-finals against Akira Santillan, Zhang had one of those days where he played his best tennis when he was down, having saved 14 of 14 break points. If Zhang had any hopes that he would repeat the feat versus Laaksonen, he was in for a rude awakening. The top seed hit more clean winners in the first set than most players do all year. To say that Laaksonen was on fire would be an understatement. However, the wear and tear of having battled through four matches of three sets - each in high heat and humidity - showed when he called for a trainer leading 4-1 in the first.

You May Also Like: Fitness A Priority For Wu Yibing In Return To Tour

Still, Laaksonen ripped Zhang’s balls apart like a Viking gone wild on a piece of beef jerky. Though Laaksonen was throwing down the hammer, Zhang was not about to give up. The Nanjing native took his whipping like a man and never dropped his head or quit fighting. In fact, he began to fight even harder. Desperate to find a way to hold serve, he mixed up his serve speed, put more balls in play and tied a rope around his waist and hung on for dear life. For Zhang, it must have felt like a gift from heaven when Laaksonen’s left thigh went lame. Up a set, but down a double break in the second, Laaksonen realised the futility of continuing. Not wanting to risk greater injury, he made the smart decision and retired. It was an unfortunate ending for a player who set a very good example all week long.

What about Zhang? All in all, he logged more hours and matches this week than any player. Winning five singles matches and four doubles matches says a lot about his training and level of fitness. I observed his on-court and physical training in Beijing and he was one of, if not, the hardest worker in the camp. But I suppose the greatest takeaway is that no matter how bad it feels out there, how great your opponent is playing, if you can just keep believing and keep fighting, sometimes persistence gets rewarded. And that is the beauty of professional tennis.