Duckhee Lee competes on home soil at the 2018 Gwangju Challenger.

Robert Davis
This article contains:
Veteran tennis writer Robert Davis provides an inside look at the ATP Challenger Tour through his series of dispatches. This week, he visited the tournament in Gwangju, Korea.

They call it a ‘duck shot’. A term that hunters use when referring to the medium-heavy lead shot used for shooting water fowl.  A single shot will not kill you, but absorb a few at once and before you know it you are bleeding out. That is what it is like playing against South Korea’s Duckhee Lee.

Lee does not possess the heavy artillery to take you down with a single stroke, but don’t let him pull the trigger on both barrels or you will be bending over like an overweight hiker in the Himalayas.  In many ways, the 20-year-old reminds me of a boxer who wins by throwing disciplined combination punches of jabs, body shots and crosses while depending on good footwork to get out of trouble.

By now, everyone knows Lee is hearing impaired, but what still surprises them is how he always seems to be in the right place at the right time. While one of his five senses might be lacking, Lee compensates with the most extraordinary innate ability to anticipate the direction of an opponent’s shot before it is struck.

Last year around this time, the Korean held an ATP Ranking of No. 160. It seemed as if he was on the fast track to stardom. But Lee has slipped a bit since then and as every player knows, defending results without the help of a big weapon is very hard. Tennis parents and fans often do not understand why. They tend to look at the rankings as an absolute indicator of the winners and losers. Thankfully, tennis is not played on paper.

You May Also Like: Challenger Dispatch: Zhang Ze Reigns In Chengdu

When a player is climbing the ladder and winning matches with delayed pressure, where the ball bounces always seem to be in his favor. Because that is what tennis is, a game of inches. But the next year, said player is a marked man and the pressure to at least maintain their ATP Ranking is turned up to high heat. And like crabs in a pot of boiling water, lower ranked players take aim and try their best to pull him down. Without a big serve or forehand to get out of trouble, long points get tricky. Very soon the losses pile up and before a man realizes it, he has lost his confidence and starts doubting the very strategy that made him so good the year before.

Here in Gwangju, Korea, locals say it is the hottest summer in 100 years. That might be the reason for all the empty cases of Cass beer bottles and Jinro soju stacked up high in the back alleys. There is hot and there is very hot. And then there is what we have this week; eye squinting, scorched earth, gut-check hot that makes a man question how bad he wants to grind out a long rally. This week, players have shown a tendency to check out down the line or try ill-advised drop shots to shorten the points. Heat is the great equalizer of tennis. This week, they have opened more bags of ice than cans of tennis balls and ATP Supervisor Greg Wojcik had to change the daily start time for each match till the afternoon to avoid the dangerous noon sun.

There are some fine tennis players here who have good power and fluid strokes, and then there are some great competitors who win more matches with their head, heart and legs than a first serve. Which brings me to the third seed, Alexander Bublik of Kazakhstan. Last year, the 21-year-old Kazakh held an impressive ATP Ranking of No. 95. Today, he sits at No. 239. Standing at 6’5”, he has a rocket of a serve.

As we witnessed last week at the ATP Challenger Tour event in Chengdu, he is capable of serving 22 aces in a match. But in the same match, he also served 21 double faults. On Wednesday, Bublik managed to scratch out a second-round win against Benjamin Lock of Zimbabwe. 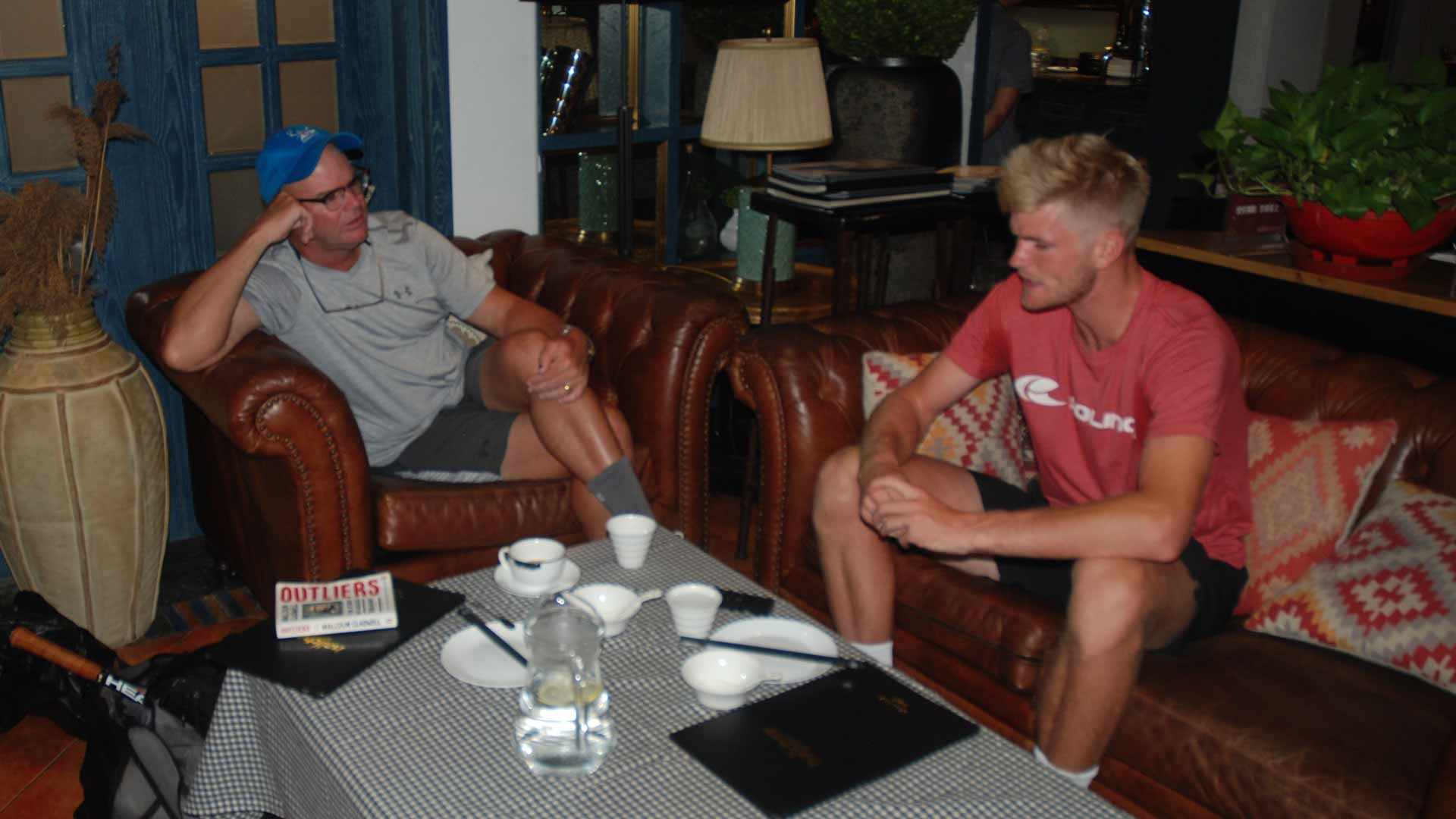 This week is special for Lock, as he got his first win in the main draw at an ATP Challenger Tour event against Yunseong Chung of Korea. Watching Lock practice and play, I have no doubt that more wins are soon to follow. At 6’6”, Lock stands ramrod straight and with a shock of blonde hair that will make you do a double take. Big Ben looks you straight in the eyes, says ‘thank you’ and ‘yes, sir’ and he doesn’t fidget with his phone or blow off serious topics. His grandparents played competitive tennis and so did his parents.

Like Byron Black and Wayne Black, they also had a grass court at their family owned farm outside of Harare. But unlike the Black family, when the government changed and land reform policies took effect, the Lock family lost it all. Two years ago, I was in Harare and visited the Locks at their home in the suburbs. Over beers and barbeque, I listened to Benjamin’s father tell the story. Mr. Lock has lived a life of have and have not, but he does not live in the past. Full credit to Benjamin, his brother Courtney John and the entire Lock family for maintaining a rugged determination to play professional tennis under very tough conditions. Like life, nobody said tennis was fair and you don’t get those precious ATP Ranking points without working hard. You got to earn them the hard way and that is something that the Lock family understands.