Challenger of the Year selection keeps pleasing players and fans

In order to run a world-class tennis tournament like the $125,000 ATP Challenger Tour event in Mons, Belgium, it helps to have someone in charge that has played in many of them.

Enter Dominique Monami. During her 10-year career, she peaked at No.  9 in the WTA rankings in 1998 and won four singles titles. Since moving on to become the tournament director at the Ethias Trophy, she’s drawn from her time on tour to offer everything that a player could need during their week in Mons.

The tournament debuted in 2005 and with her help, was selected as a 2015 Challenger of the Year (along with events in Braunschweig, Germany, and Monterrey, Mexico). Not only has it become one of the most popular tournaments among players on the ATP Challenger Tour calendar, it’s also a local favourite with nearly 20,000 people turning up every year to watch the tennis.

“I think my past experience helps me to better understand the needs of the players and make a schedule that’s fair for everyone. I’m also working with my team to help the players as much as possible outside the court,” said Monami. “We offer cinema tickets, golf and free food with delicious sweets. My hope is that the players feel good here so they play at their top level and want to come back next year. Many of our players come back year after year.” 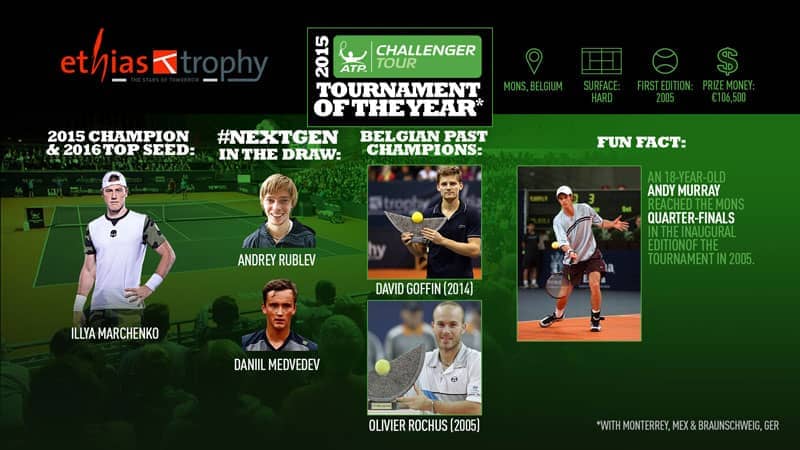 One of those players is Belgian No. 2 Steve Darcis, a two-time finalist making his 11th appearance this year at the Ethias Trophy. He regularly practises in Mons and the tournament’s stadium has become familiar territory to him.

“It’s tough to find a better Challenger,” said Darcis. “The stadium is almost full all the time, especially when Belgians play. The atmosphere is very nice, the food is great too and the people working there are doing everything they can for the players.”

You May Also Like: ATP Challenger Tour Awards Announced

The tournament has served as a springboard for several players who went on to reach the highest levels of the sport. Andy Murray reached the quarter-finals in 2005, while former champions Ernests Gulbis (2005), Janko Tipsarevic (2006) and David Goffin (2014) have all gone on to crack the Top 15 of the Emirates ATP Rankings.

For the Belgian players competing here, it also offers a rare opportunity to play in front of a home crowd.

"I have family and friends come all the time because I usually play too far away,” said Darcis. “It's great for me to play in front of the people I love.”