Say hello to the fresh face of Polish tennis. Hubert Hurkacz is staking his claim as the European nation's next superstar and now he has a title to show for it.

On Sunday, Hurkacz captured his first ATP Challenger Tour trophy in ruthless fashion, streaking to the title on home soil in Poznan. The 21-year-old dominated the championship 6-1, 6-1 over top seed Taro Daniel. He needed 59 minutes to lift the trophy, capping a strong week that also included a straight sets win over second seed Guido Andreozzi.

At 21 years and three months, Hurkacz is now the youngest player from his country to triumph on the circuit since Jerzy Janowicz in 2010. He is also the sixth #NextGenATP winner this year, joining Rudolf Molleker (Heilbronn), Taylor Fritz (Newport Beach), Reilly Opelka (Bordeaux), Marc Polmans (Launceston) and Jaume Munar (Prostejov).

It has been an impressive 2018 campaign for the Wroclaw native, also highlighted by his first Grand Slam match win a week prior at Roland Garros. He came through qualifying and upset Tennys Sandgren in the first round, before falling to third seed Marin Cilic in four tight sets.

And most importantly, Hurkacz has ascended to a career-high No. 121 in the ATP Rankings, becoming Poland's No. 1 player. He is also up three spots to 10th in the ATP Race To Milan, with the Top 7 players (plus one wild card) qualifying for the Next Gen ATP Finals in November.

Hurkacz spoke to ATPWorldTour.com following his victory in Poznan...

Hubert, congrats on winning your first Challenger title. How does it feel?
It’s great to win my first Challenger in Poland. It’s an indescribable experience for me. I think I would have enjoyed it the same if I won abroad, but it’s something special to win in my country.

Taro is a Top 100 player and you dominated the final from start to finish. Talk about the match.
Taro's style was suitable for me and I think this was the key to my success. I took the initiative and I served the ball really well, so I could end the match quickly. Taro was unstoppable during his last few matches, but I did well too. I didn’t focus on his success this week, because my goal was to win this match.

You beat some strong players during the week. What went right for you?
My key to success was to do my best and it happened throughout the week. Of course, I had difficult moments and then I raised my level. Today I had these moments but I stepped up in the big points. I just had to keep my concentration all the time on court.

It's been a great year for you so far. Tell us about the biggest thing you've learned while competing on the ATP Challenger Tour.
To stay positive. That was the biggest change. To be more solid during the matches and not having as many ups and downs. I'm competing at a higher level and am now able to win against better opponents. It's good.

Talk about the experience at Roland Garros. How much confidence did it give you?
For sure, I’ve won in Poznan thanks to the experience from the French Open. I had to beat good players at both events. Generally both of them – Poznan Open and Roland Garros - made me stronger. Now I know that I can win trophies. 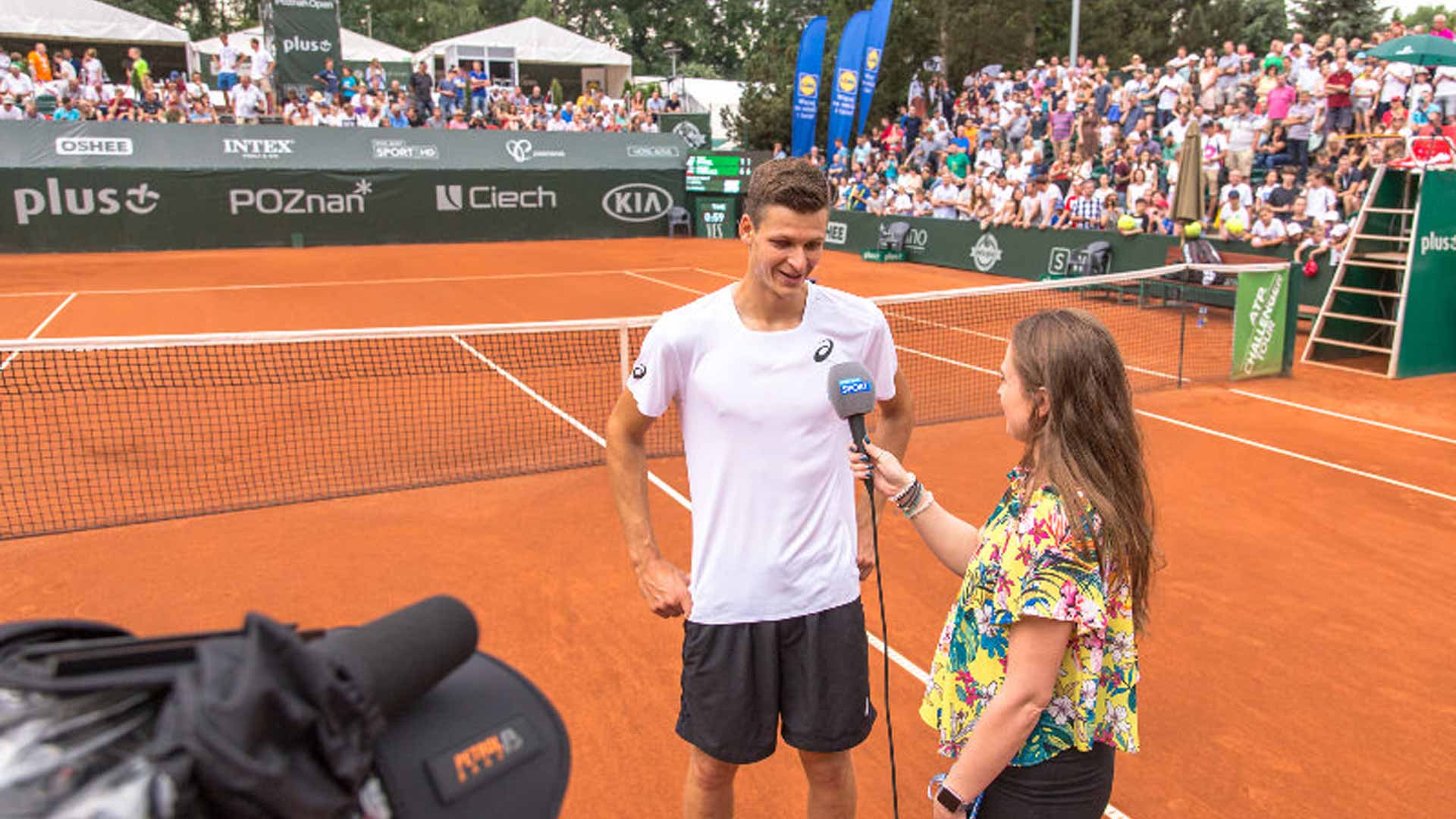 For those of us who don't know much about you, tell us something. What do you enjoy doing off the court? Do you have any passions outside of tennis?
I'm really passionate about cars. It's my hobby and I really like them. I love to drive. And I like to go to the racing circuit and watch them, when I have time. I also like reading books. It's relaxing for me. Sometimes I read books that help me on the court with the mental side.

You are up to a career-high in the Top 150 of the ATP Rankings. Did you set any goals at the start of the year and what are they now?
I think it’s possible to move into the Top 50 of the ATP Rankings. That's my goal. I haven’t trained yet on grass, so I’m not prepared for Wimbledon, but I will train and try to to make Polish fans enjoy my results.